Giant Cell Tumour of Bone (GCTB) is a rare locally aggressive tumor that in 2-4% can contain a malignant component. Due to the rarity there is only sparse evidence on how to treat it in the metastatic setting. On the contrary denosumab has shown promising results on benign GCTB. Here we present two patients with malignant metastatic GCTB treated with Denosumab with partial response evaluated with RECIST 1.1. This indicates that denosumab can be added as a well- tolerated treatment option for malignant metastatic GCTB.

Giant Cell Tumour of the Bone (GCTB) is a rare locally aggressive osteoclastogenic tumour that is generally considered benign. However, in rare cases, it can contain a malignant component juxtapositioned to the benign GCTB, often histopathologically described as osteosarcoma, fibrosarcoma or undifferentiated pleomorphic sarcoma [1-4]. Standard treatment in benign cases is surgery, yet surgery can result in severe morbidity, or the tumour can be unresectable, in which cases systemic treatment with denosumab can be considered [5]. Despite benign histology, in rare cases, GCTB can metastasize. In these cases, it is well known that denosumab is effective, and the prognosis is generally favorable compared to malignant metastatic GCTB[6]. The most extensive study on denosumab treated GCTB included 532 patients with surgically unresectable or locally advanced but resectable GCTB. It showed long term disease control with denosumab treatment and a favorable safety profile [7]. An interim analysis of this study was published in 2013 and led to the approval of denosumab for benign GCTB by the FDA and EMA [5]. The targetable pathophysiology of GCTB goes through stromal tumor cells, which express the Receptor activator of nuclear kappa-B ligand (RANKL). RANKL activates receptor activator of nuclear kappa-B (RANK) on osteoclast-like giants cell and their precursors. Denosumab is a human clonal antibody targeting RANKL and thereby inhibits RANK-RANKL interaction, thus creating an inhibition of bone destruction by giant cells. All studies on denosumab treated GCTB are based on benign GCTB; the evidence of the effect of denosumab on malignant GCTB is lacking. In this paper, we present two recent cases of malignant GCTB treated with denosumab; one with secondary malignant GCTB and aggressive growth of lung metastases one year after primary resection and one with locally advanced non-resectable tumour at os sacrum and subsequent lung metastases. Both patients had a partial response after treatment with denosumab.

Both patients signed an informed consent form and received treatment at the Department of Oncology, Aarhus University Hospital, Denmark. The treatment effect was monitored by CT scans every 12 weeks evaluated according to RECIST 1.1.

Patient 1: Male, 41-years of age presented with pain in the right knee at activity. Magnetic Resonance Imaging (MRI) showed an osteolytic tumour in the lateral femur condyle. Biopsy showed benign GCTB with a Ki67 index of up to 20%. The sarcoma pathologist considered osteosarcoma, but in conclusion, this was not found. After that, curettage was performed as standard treatment. After only four months, MRI indicated local tumour relapse in the cavity. To reduce the risk of local relapse, resection with a prosthetic operation was performed. Histological diagnosis was atypical giant cell tumour, bordering on malignant giant cell tumour (Figure 1). After one year, X- ray of the lung raised suspicion of metastases. Subsequent PET/CT confirmed three metastases in the left lung, two in the right lung, a PET-positive lymph node in the mediastinum and a metastasis in the left kidney. Metastases in the lung were confirmed by biopsy, which showed a malignant transformation of GCTB.

Figure 1: Malignant giant cell tumour from case 1: Recurrent bone tumour in distal femoral epiphysis (A and B) with a homogeneous appearance of equally distributed osteoclast-like giant cells and mononuclear cells on low power (A), but apparent nuclear pleomorphism and atypical mitoses on high power (B). Pulmonary metastasis low and high power (C and D) with the transition from lung (upper right corner) to the tumour with fewer giant cells (C), slight pleomorphism and conspicuous mitoses (D).

Meanwhile, the patient had hemoptysis and increasing pain in the thorax. Denosumab 120 mg s.c. was initiated with loading dose at days 1, 8, 15 and 22. After that, the patient received denosumab every four weeks. After two months of treatment, the first CT scan of the thorax, abdomen and pelvis revealed partial response. See Table 1 and Figure 2. After additional three months of treatment with denosumab monthly, a new CT scan revealed progression and denosumab treatment was stopped.

For further treatment, we followed the treatment guidelines for osteosarcoma and initiated doxorubicin (37,5mg/m2 on days 1 and 2) and Cisplatin (60mg/m2 on days 1 and 2) every third week. Cisplatin was discontinued after the first treatment due to tinnitus, but treatment with doxorubicin continued 75mg/m2 every third week. After two cycles of chemotherapy, the CT scan showed stable disease according to RECIST 1.1. The patient continued with doxorubicin treatment and received in total five cycles. A new CT scan was performed and showed rapid progression; one metastasis in the lung grew from 39 mm to 80 mm. The general conditioning was worsened, and hemoptysis was evident again. Subacute palliative radiation 20Gy/4 fractions was given against the largest lung metastasis and shortly after the third line of systemic treatment was started: Ifosfamide (3g/m2 on day 1, 2 and 3) and etoposide (120mg/m2 on day 1, 2 and 3) every third week. The patient had a COVID-19 infection, lung embolism, and bleeding in the left kidney's metastasis, and some of the treatment was delayed. After six cycles, the patient had a partial response, and maintenance treatment with trofosfamide is ongoing. The general condition has improved, and he has no hemoptysis or pain in the thorax.

Patient 2: Male with known Neurofibromatosis Recklinghausen 1 and a history of multiple resections of neurofibroma and one schwannoma. At the age of 39 years, he presented with lower back pain expanding down to the left leg. MRI revealed a tumour involving os sacrum. Two biopsies were made before the pathologist suspected GCTB and atypical plexiform neurofibroma. Due to the rapid growth of the tumour, a third biopsy was made: the histology now showed malignant GCTB, and the earlier histological material was reviewed, identifying components of malignancy classified as undifferentiated spindle cell sarcoma (Figure 3). PET/CT was without metastatic disease, but the tumour was non-resectable (Figure 4). Radiotherapy with curative intent or at least long-term control was initiated, and the patient received 60Gy/30 fractions, 5/week. This treatment reduced the severe pain caused by the tumour; later, CT showed tumour shrinkage. After seven months, a CT scan revealed two metastases in the left lung measuring under 10 mm. They were surgically removed, malignant GCTB was confirmed by our pathologists (see Figure 4), and denosumab 120 mg subcutaneously was initiated with loading dose day 1, 8, 15 and 22 and subsequent injections every four weeks. Baseline CT showed another two metastases in the lung, but at follow up CT, after three months, they had regressed completely (Figure 5). After 12 months of treatment with denosumab, there is stable disease according to RECIST 1.1. However, due to clinical progression with increasing pain at the lower back, a new biopsy was made that showed malignant GCTB with undifferentiated pleomorphic sarcoma, and the giant cells had regressed completely due to denosumab treatment. Doxorubicin (25mg/m2 on days 1, 2 and 3) and ifosfamide (3g/m3 on days 1, 2 and 3) were initiated in 80% dose due to the general condition. After four cycles, the patient had clinical progression with severe pain in the lower back, and MRI verified progression. 20Gy/4 fractions at the primary site were given, and further chemotherapy docetaxel (100 mg/m2 on day 8) and gemcitabine (900mg/m2 on days 1 and 8) were initiated every third week. Due to the worsening of the general condition, he only received one cycle. 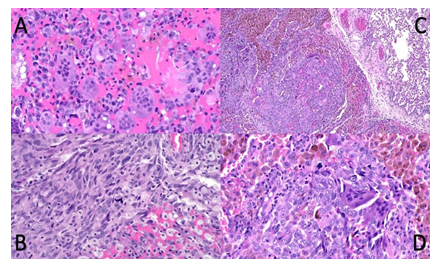 The primary treatment of malignant GCTB is surgery, but when the tumour is non-resectable, the evidence for the optimal treatment modality is weak due to the rarity of the disease. Only approximately 4% of GCTB are malignant, either as primary malignant GCTB or secondary malignant GCTB [4]. This paper presents two cases with an apparent response to systemic treatment with denosumab. To our knowledge, this is the first time it has been published in the literature. A study on benign GCTB showed significant morphological changes due to denosumab treatment. The RANK positive giant cells were reduced by 90%, and the stromal cells were likewise reduced. 65% of the patients had an increased proportion of dense fibro-osseous tissue and/or new woven bone replacing areas of proliferative RANKL positive stromal cells [8-10]. Therefore, the clinical effect in the present two cases is likely related to the regression of giant cells. A small in vitro study found a reduced proliferation of stromal cells by 50% compared to specimens from untreated patients, and this indicates that there could be an indirect effect of denosumab on the malignant cells. However, in conclusion, this remains unclear, and further studies are required to understand the possible mechanism entirely [11]. Nevertheless, the clinical effect of denosumab treatment in our two cases is comparable to the effect of chemotherapy but with less toxicity. Therefore, this study suggests that denosumab can be introduced as an additional medical treatment for malignant GCTB. A recent study states that if patients diagnosed with benign GCTB and treated with denosumab have poor or no response to reducing pain, malignant GCTB should be considered [11]. In contrast, our paper shows a rapid but not necessarily long-lasting response to denosumab even though the tumours were malignant. Especially for patient one, the general condition improved substantially during denosumab treatment, probably due to the rapid tumour response. The lung metastasis in patient 2 regressed entirely and have not recured after 15 months. To our knowledge, there is no evidence that radiotherapy (RT) can be used as a curative strategy on malignant localized GCTB. Patient no. 2 in this paper had local control of the primary tumour 22 months after RT with 60Gy/30 fractions even though it was fast-growing before RT, indicating that RT can be used palliative in malignant GCTB. However it should be kept in mind that the patient had distant failure after seven months and subsequently started denosumab treatment. Likewise, patient no. 1 had relieved pain after RT on lung metastasis. In the adjuvant setting, a retrospective study of 357 patients with malignant giant cell tumours of bone or soft tissue found no difference in survival between surgery alone and surgery + RT, indicating RT's efficacy on malignant GCTB is low [12]. This study has apparent limitations e.g. the retrospective nature, which promotes selection/publication bias.

We present two patients with malignant GCTB who were treated with denosumab and have had a partial response according to RECIST 1.1. This has not been shown in the literature until now to our knowledge. Furthermore, this paper presents two cases of radiotherapy treated malignant GCTB with stable disease and relief of symptoms. Further studies are warranted.