Inoperable and unresectable carcinoma of oral cavity is defined as the tumour which has an extensive infiltration in the buccal tissues. Any operation to remove this tumour involves an extensive surgery in which complete resection is not possible and a significant cancerous tissue is left behind. These patients are administered NACT (neo adjuvant chemotherapy) to decrease the tumour load in hope of making the tumour resectable. In most cases they are administered a combination of chemotherapy and radiation as a means of palliation. Laser ablation can bring down the tumour content predictably by a great extent in a single session. A 28 year old patient presented with a massive buccal carcinoma which was refused resection or any other intervention by major hospitals. He was a chronic tobacco chewer for last 10 years. On presentation he was suffering from pain from 2 months and oral bleeding for 1 week. Laser ablation procedure was performed. His pain subsided in 24 hours and swelling gradually decreased over 2 months. Conclusion: Laser ablation is a new and viable alternative to surgery in selected cases.

Oral cancer is a significant public health problem in India and ranks among the top three cancers accounting for one third of all cancers reported in the country. Though it is easily accessible by examination and modern diagnostic tools, a vast number of patients present in later stages [2]. This is partly due to patients coming from rural areas with limited access to diagnostic facilities and attempting herbal or ayurvedic medication in the hope of eradicating it. Since it is a disease of the lower socio-economic groups there is lack of awareness as well as trying out cheaper options regarding treatment. Hence the late presentation. Early detection offers the best chance of optimal treatment outcomes and long-term control and survival [1]. The leading cause of cancer in the oral cavity in India is chewing tobacco in the form of “gutka” or “paan” and smoking “bidis” or cigarettes and consumption of alcohol. Both these substances are carcinogenic. Sharp teeth or ill-fitting dentures causing irritation of the mucosa may also be responsible. Denture related sores may be colonized by candida or HPV and may contribute to developing oral cancer [1].

A 28 year old male reported to the Department of Oral Cancer with an ulcero-proliferative lesion in the oral cavity extending on the surface of the face on left side for a period of 6 months. There was a history of tobacco chewing in the form of Gutka several times a day for 10 years prior to presentation. There was no history of smoking. He presented five months after he noticed the lesion which was then very extensive. it was diagnosed as poorly differentiated squamous cell carcinoma on biopsy. Oral hygiene was unsatisfactory. In addition, he had multiple lymph nodes in the ipsilateral neck. The patient presented with a gradual increasing swelling of the left cheek and frequent bleeding episodes from the tumour over 1 month. On examination he had a massive tumour of the left buccal mucosa extending to the upper and lower gingivobuccal sulci, the cheek muscle, angle of mouth and skin. Posteriorly it extended to the RMT(Retro molar trigone. There was total trismus. He had a weight loss of 12 kgs over last 3 months.

Patient had Nasotracheal intubation under GA. The tumour and lymph nodes were ablated using the 980 nm surgical diode by Gigaa lasers under sonography guided imaging. Mouth opening was achieved under anaesthesia by use of mouth opener instruments. Repeated laser ablations were carried out on a weekly basis under local anaesthesia and sonography guided imaging for a period of three months. Enlarged lymph nodes were laserised by using direct ablation technique under sonography control [4]. The first laser was of two hours duration while subsequent procedures under local anaesthesia ranged from 5 to 10 minutes making total of 4x3=12 number of procedures. Concurrent chemotherapy sessions with Cisplatin, Paclitel and 5 FU in standard dose were administered every three weeks for 6 cycles MRI study was carried out every two months after primary procedure to detect regression of the disease.

Patient was pain free within 24 hours of primary laser procedure. No bleeding was seen after 24 hours. He was on soft diet within 3 days and full diet within a week. He was discharged after 6 days. His speech improved considerably. Swelling reduced gradually within two months. The lymph nodes regressed to undectable levels within 3 months He got back to normal activity in six weeks and had 4 kg weight gain over 4 months. There was a recurrence which was managed by repeated laserisation under local anesthesia. There was an oral fistula which was plugged with plastic and gauze dressing enabling him to eat from opposite side. The dressing was changed after every meal. Patient lived for 11 months post procedure and died due to unmanageable multiple local recurrences. 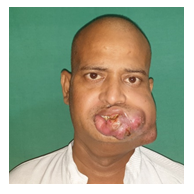 Figure 1: Presentation of Patient .Extensive swelling of face and angle of mouth. 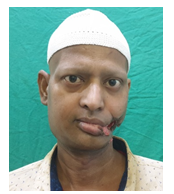 Figure 2: Post Laser and chemotherapy after 4 months. Resolution of angle of mouth .Resolution of tumour with oral fistula. 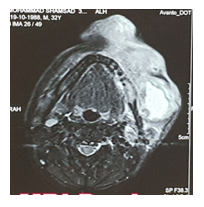 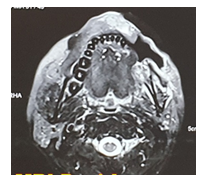 Figure 4:  MRI Total resolution of the tumour after 4 months.

The carcinogens in cigarette smoke belong to multiple chemical classes, including polycyclic aromatic hydrocar-bons (PAHs), N-nitrosamines, aromatic amines, aldehydes, volatile organic hydrocarbons, and metals. In addition to these well-established carcinogens, others have been less thoroughly investigated. These include alkylated PAHs, oxidants, free radicals, and ethylating agents. Considerable evidence indicates that in human cancers caused by cigarette smoking, PAHs, N-nitrosamines, aromatic amines, and certain volatile organic agents play a major role. Extensive data in the literature demonstrate the uptake of these carcinogens by smokers. The data confirm the expected presence of metabolites of these substances in the urine of smokers at higher levels than those in nonsmokers [5] The incidence of inoperable cancers presenting in India is much more than operable cancers. Estimates are about 80% of all oral cancers are in stage 4 when they present in India [2]. It is not just lack of medical facilities but also rapid progression of the disease in most cases. The survival rates for inoperable cancers in India are abysmally low.

Most patients have a life span of less than 3 months [6-8]. Even though most discussions separate Quality of life from Quantity of life, they cannot be separated in a surgery which plunges the patient into major changes in his life pattern. Quality index which combines the 2 has been proposed in these cases [9]. Severe mutilation and plunging of Quality of life becomes one of the main reasons for patients delaying surgery for oral cancer. Laser ablation is now recognized as an alternative to excision in many soft tissue tumours. Prognosis is better for small sized lesions and is obviously poor for large unresectable lesions [9]. Laser ablation works by heat induced destruction of cancer cells as well as vascular thrombosis and protein denaturation of cellular proteins of heat affected cells [10, 11]. Judicious use under sonography control can be used to kill a majority of the tumour. This can be followed by chemotherapy for a good palliation and remission (Figure 1-4). Conventionally this stage of patients are managed by chemotherapy and radiation which has an extremely low rate of response. Palliation is added to the term which basically means pain control and airway patency [12]. Since this is end stage disease most patients will not live beyond 2 months at this stage. Remission is the term used for a period of no active cancer. Laser can add a new level of remission for these patients by clearing up the tumour with help of chemotherapy. The quality of life is much better with practically all oral functions intact.

The main limiting factor in assuring a long-term survival in cases of Late stage oral cancer is due the phenomenon known as field cancerisation [13, 14]. Field cancerisation refers to the phenomenon of multiple origins of deposits of genetically altered cells in the oral mucosa which are more prone to turn malignant as time goes by. This phenomenon is more apparent in late stage cancers and in patients ingesting tobacco, Alcohol products. This leads to an inevitable recurrence in the surrounding tissue spaces of a surgically corrected tumor bed with excision and a surgical Flap. This makes any surgery in late stage oral cancer mainly palliative even if carried out with a curative intent with adequate surgical margins [13, 14]. Several studies have emphasized the Limited Quality of Life obtained after mandibular/maxillary removal operations [9]. In our review of literature we could not find any similar case with a full resolution of oral cancer in such an extensive stage. Therefore, we would like to present this case a start of a possible alternative for patients in major unresectable cases of oral cancer.

Laser ablation surgery is a powerful new tool for decreasing the tumour load of oral cancer patients in inoperable cancers. The decreased tumour load allows a better chemotherapy effect. Though there will be a marked improvement in swelling and most patients will go into remission, cure is very difficult to achieve in these cases due to field cancerisation. Laser ablation involves specia-lized skills and surgeons need to be trained in this tech-nology for a widespread acceptance of its use in Oncology.

No funding was received by authors for this study. Permissions were taken for publication of this case.