Paraneoplastic Pemphigus in A Patient with Chronic Lymphocytic Leukemia: A Case Report

Paraneoplastic pemphigus (PNP) is a rare and autoimmune mucocutaneous disease associated with underlying neoplasia. The diagnosis of PNP is often difficult since skin manifestations maybe initially similar to other dermatological disorders. The case is here reported of an 84-year old male diagnosed with PNP associated with CLL, who initially presented with severe diffuse erythematous lesions in the oral mucosa and nasal mucosa, and vesicular-bullous lesions on the trunk and extremities. The patient died due to respiratory failure and hypotension caused by acute PTE.

Paraneoplastic pemphigus (PNP) is a dermatosis which generally occurs secondary to lymphoproliferative malignancies such as non-Hodgkin's lymphoma (NHL), chronic lymphocytic leukemia (CLL) and Castleman's disease and thymoma [1]. Males are affected more often than females. The disease differs from classical pemphigus as it has polymorphous lesions (bullous, targetoid, lichenoid, eczematized) and severe mucosal involvement accompanied by resistant stomatitis [1, 2, 3]. The PNP case reported in this paper developed after the first cycle of Rituximab-Chlorambucil (RC) chemotherapy regimen for the treatment of CLL.

An 84-year-old male patient with CLL was admitted to the Hematology Department with complaints of head and neck lesions. The patient had received the first cycle of RC chemotherapy two weeks previously and it was learned from the history that the lesions started 1 week after the chemotherapy. The physical examination of the patient revealed yellow crusted lesions with purulent discharge in the head and neck region, especially in the periorbital region, diffuse erythematous lesions in the oral mucosa and nasal mucosa, and vesicular-bullous lesions on the trunk and extremities. No other positive sign was detected in the examinations of other systems. The patient was first evaluated in the Outpatients Clinics of the Infectious Diseases and Dermatology Departments (Figure 1). 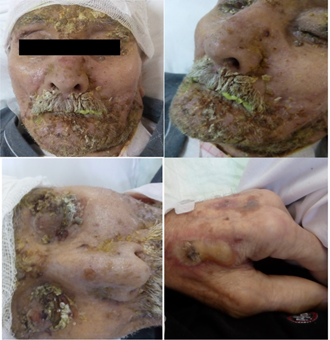 Figure 1: Vesiculo-bullous skin lesions with purulent discharge in the head and neck region, especially in the periorbital region.

The patients was hospitalised as disseminated herpes virus infection, streptococcal skin infection and gingivistomatitis were considered in the initial differential diagnosis. Fluconazole, acyclovir and sulbactam-ampicillin (SAM) treatments were all started empirically. Complete blood count revealed Hb:12.0 gr/dl, leukocyte:19000/mm3, lym:11000/ mm3, Plt:295000/ mm3, C-reactive protein:103 mg/dl, sedimentation rate:52 mm/s, urea:105 mg/dl, glucose:150 mg/dl, creatinine:1.66 mg/dl, Na:136 mEq/L, and K:5.4 mEq/L. No atypical cells except mature lymphocytosis and smudge cells were seen on the peripheral blood smear. IgM antibody of Herpes simplex virus (HSV) type I and II was negative, whereas IgG was positive. Biopsy of the skin lesions revealed intraepidermal suprabasal cleavage, epidermal acantholysis, and dyskeratotic keratinocytes. The skin biopsy samples for DIF testing showed linear deposition of IgG along the basal membrane. ELISA testing for antibody against desmoglein 3 was positive. The patient was diagnosed with PNP. Thus on the 9th day of admission, treatment was started of Rituximab at 1000 mg dose and methylprednisolone at 1 mg/kg/day. All empirical antibiotherapies were discontinued except SAM to prevent the forming of secondary bacterial skin infections. Despite these treatments, the lesions progressed so that patient was admitted to the Dermatology Department on day 13 of admission. During the follow-up period, the patient developed pulmonary thromboembolism. DMAH was started but the patient died due to severe respiratory failure 5 days after admission to the Dermatology Department.

Paraneoplastic pemphigus (PNP) is a rare and autoimmune mucocutaneous disease associated with underlying neoplasia. Both humoral and cellular immunity play a role in the pathogenesis of PNP. It has several clinical and immunopathological features [1]. There have been no randomized control trials to guide the evidence-based treatment of PNP due to the rarity and high mortality and morbidity of the disease.

To date, all evidence of treatment efficacy has been obtained from case reports, small case series and expert advice [2]. PNP is associated with NHL (39%), CLL (18%), Castleman's disease (18%), carcinoma (9%), thymoma (6%), sarcoma (6%), and Waldenström macroglobulinemia (1%). Choi Y et al. analyzed 12 Korean patients with PNP and associated hematological-related neoplasms were determined in 11 patients, the most common being 4 with Castleman's disease [1]. In all these malignancy-associated cases, chemotherapy and radiotherapy applied for malignancy may play an additional role in the pathogenesis of the disease [4]. The association of PNP with CLL has been reported in many cases, particularly in recent years [5, 6, 7].

The diagnosis of PNP is often difficult since skin manifestations maybe initially similar to other dermatological disorders. The case reported here is of a patient with PNP associated with CLL, who initially presented with severe diffuse erythematous lesions in the oral mucosa and nasal mucosa, and vesicular-bullous lesions on the trunk and extremities. Streptococcal skin infection was considered most likely, so empirical antimicrobial agents were started. Some authors have identified three major and three minor diagnostic criteria for the diagnosis of PNP. The major criteria include a polymorphic rash, any accompanying malignancies, and positive detection of heterogeneous autoantibodies with immunofluorescent testing. The minor criteria include IgG and C3 deposition in direct immunofluorescence (DIF) assay in histopathology, the detection of acantholysis findings and detection of autoantibodies in the IFA. There must be 3 major criteria or 2 major and 2 minor criteria for the diagnosis of PNP [8, 9]. In the current case, there was a polymorphic rash accompanying CLL as major criteria and acantholysis, and linear IgG deposition in DIF testing as minor criteria.

The clinical manifestation of PNP differs from classical pemphigus as it shows acral, periocular involvement, severe and treatment-resistant stomatitis, targetoid, eczematous or lichenoid lesions [8]. In the current patient, periocular erosions were present in the acral areas, with erythematous plaques with bullae in the centers of the targetoid, especially in the acral areas, and stomatitis resistant to treatment. There were vacuolar changes in the basal layer and linear IgG deposition in addition to suprabasal cleavage.

PNP has a poor prognosis and patients generally die because of treatment-induced immunosuppression, respiratory failure and gastrointestinal bleeding. The 5-year overall survival rate has been reported to be 38% [10]. As first-line treatment, systemic steroids, rituximab and daclicuzumab are commonly used whereas cyclosporine, cyclophosphamide, azathiopurine, IVIG and plasmapheresis can be used as second-line treatment [2]. It is difficult to treat these cases with underlying associated malignancies and/or chemotherapy induced immunosuppression. Additional immunosuppressive drugs may exacerbate immunesuppression and cause severe infections. Recent reports have shown that the major reasons for mortality in PNP cases are sepsis, progression of malignancies and respiratory failure [1, 7, 10]. Venous thromboembolism is one of the most common causes of morbidity and mortality in cancer patients with incidence of approximately 11% in CLL cases [11]. Hyperleukocytosis may contribute to thrombosis in CLL patients. In the current case, the patient died due to respiratory failure and hypotension caused by acute PTE.

This report presents a PNP case which is rare but dangerous condition in a patient with CLL. As the management and treatment is difficult, early and definitive diagnosis is very important. Clinicians should aware of PNP as a differential diagnosis in patients with CLL when vesiculo-bulloeus skin lesions with purulent discharge develop.