Background: To observe the factors related to the survival and prognosis of patients with resectable stage T4 colorectal cancer.

Methods: A total of 148 patients with resectable stage T4 colorectal cancer who underwent surgery at the First Affiliated Hospital of Sun Yat-sen University between August, 1994 and December, 2005 were retrospectively analysed. Univariate and multivariate analyses of the associations between clinicopathological variables and survival were analysed using the Cox regression model.

Conclusion: The postoperative prognosis of T4 colorectal cancer patients is poor, and postoperative pathology indicating lymph node positivity was an independent factor for OS and DFS.

Colorectal cancer is one of the most common malignant diseases in the world and has a high mortality. China is a high incidence area for colorectal cancer, with more than half of the world's morbidity and mortality [1]. Surgical resection is one of the main treatment methods for colorectal cancer patients. Early surgical treatment for colorectal cancer is effective, and the 5-year survival rate is as high as 60.5% [2]. Most patients have progressed to locally advanced disease before getting diagnosed and have lost the opportunity to undergo direct surgery. Even after surgery, it is difficult to achieve complete resection. Advances in surgical techniques and perioperative management have improved patient survival, but surgery alone does not improve the outcomes of patients with locally advanced colorectal cancer. To improve the resection rate, the guidelines [3] recommend that patients with locally advanced colorectal cancer can be treated with neoadjuvant chemoradiotherapy and/or chemotherapy combined with surgery, and radical chemoradiotherapy is also feasible. However, due to the limited accuracy of preoperative staging and patient willingness, some patients preferred to undergo surgical resection, and some doctors considered that neoadjuvant therapy may increase the risk and complications of surgery, so some doctors first chose surgery and then determined whether postoperative adjuvant therapy was feasible according to the postoperative pathology results. Patients with stage T4 colorectal cancer have poor prognosis and are prone to developing recurrence and distant metastasis. This study investigated the prognostic factors of patients with postoperative T4 colorectal cancer.

General information: A retrospective analysis of 148 patients with T4 stage colorectal cancer who underwent surgery at the First Affiliated Hospital of Sun Yat-sen University between August 1994 and December 2005 was performed. The inclusion criteria were as follows: postoperative pathological staging revealed neoplastic invasion out of the membrane (T4), and the survival time was longer than 2 months. The exclusion criteria were as follows: intolerance to surgery because of poor cardiopulmonary  function; distant metastasis and so on. All patients and their families gave informed consent to participate in the study and signed informed consent forms. The study was approved by the Ethics Committee of Sun Yat-sen University.

Follow-up and review: The patients were followed up every 3 months after surgery for the first year, 6 months for the next 2 years and yearly thereafter. The first review was performed at the hospital one month after the operation. Chest and abdominal CT, routine blood, liver and kidney function tests, tumour marker tests, colonoscopy and other examinations were routinely performed; if necessary, a whole body bone scan and PET-CT were performed to determine whether there was systemic metastasis. Local recurrence was defined as an anastomotic stoma or regional lymph node recurrence. Distant recurrence was defined as positive, distant lymph nodes or distant organ metastasis.

The 5- and 10-year DFS rates after surgery of the whole group were 44.2% and 30.3%, respectively, and the median DFS duration was 45.2 months. Sex, age, obstruction, tumour site, liver metastasis, histological grade, family history, and postoperative adjuvant therapy were not associated with DFS (P>0.05). Cox multivariate analysis showed that postoperative pathological lymph node positivity was an independent factor affecting DFS in patients. Compared with patients with negative lymph nodes postoperatively, those with positive lymph nodes had a 1.425 times higher risk of tumour recurrence or metastasis (95% CI: 0.974-1.836, both P<0.01). See Table 2. 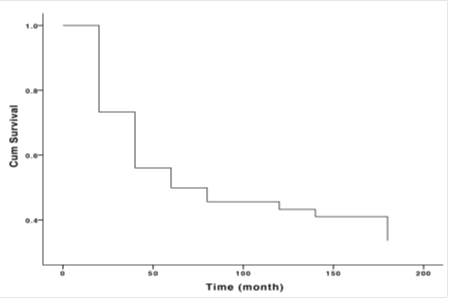 This study selected patients who underwent surgery between August 1994 and December 2005. All patients had a 10-year survival rate of 32.2%, a median survival duration of 58.8 months, and poor overall survival. The main reasons for the poor prognosis in patients with colorectal cancer are roughly divided into two aspects. First, the accuracy of preoperative staging is not high, and patients do not receive standardized treatment. Second, the tumour is invasive, and local recurrence or distant metastasis can easily occur after surgery.

The 5-year and 10-year disease-free survival rates were 44.2% and 30.3%, respectively, and the median DFS duration was 45.2 months. More than one-third of the patients had tumour progression within 1 year after surgery, so R0 resection of the tumour was performed. Controlling postoperative recurrence or metastasis is the key to improving survival. Regarding T4 stage colorectal cancer, the probability of achieving complete R0 resection in a single operation is not high. Even if R0 resection is achieved, the 5-year survival rate is not satisfactory. Studies have shown that neoadjuvant chemoradiotherapy/chemotherapy can improve the resection rate of locally advanced resectable tumours and prolong patient survival. In terms of reducing the postoperative recurrence rate and improving postoperative survival, a previous study found that postoperative adjuvant therapy can improve OS in patients with advanced colorectal cancer and prolong DFS [7-13]. However, in our study, postoperative adjuvant chemotherapy did not lead to improved OS and DFS (both P>0.05) compared surgery alone. This may because the colorectal cancer and T stage were too advanced, and there were micro-metastases in the lymph nodes. Conventional pathological diagnostic techniques have a limited role in the diagnosis of micro-metastasis, resulting in inaccurate postoperative staging. There were only a few cases in this study, which may cause statistical errors.

This study found that after T4 stage colorectal cancer surgery, lymph node positive was an independent factor affecting OS and DFS (P<0.01). Compared with postoperative lymph node-negative patients, lymph node-positive patients had worse OS and DFS. During the follow-up period of this study, more than half of the patients had local recurrence or distant metastasis. Liver metastasis was also an independent factor affecting OS (both P<0.001). This study also has certain limitations. First: the number of patients selected was limited, and 148 patients were included in the study. Second, the study was retrospectively analyzed and still required multicenter prospective clinical trials and longer follow-up to confirm.

Funding for this trial was generously provided by Sun Yat-sen University.

The datasets used and/or analyzed during the current study are available from the corresponding author on reasonable request.

The study was conducted in compliance with all national and international ethical standards for research with humans. All study procedures were approved by the Sun Yat-sen University and patients gave written informed consent before being enrolled.