Prognostic Indicators in Hepatocellular Carcinoma (HCC) in a Moroccan Population

Prognostic Indicators in Hepatocellular Carcinoma (HCC) in a Moroccan Population

HCC is the most common primary liver tumor with a high mortality rate. It is an unpredictable cancer with unpredictable progression. Worldwide, it is the fifth most common type of cancer and third most common cause of cancer mortality [1]. Screening ultrasound plays an essential role in cirrhotic patients; it increases the percentage of HCC detection at an early stage and consequently opens up the possibility of curative treatment [2]. The various forms of treatment available for these tumours are effective in improving survival only when the disease is diagnosed at an early stage. For patients with larger tumours and decompensated cirrhosis, no treatment appears to be capable of prolonging survival [3]. The prognosis for HCC on cirrhosis is generally poor and seems to be determined not only by factors linked to the tumor, but also by factors linked to cirrhosis. The main objective of our study is to determine prognostic factors in cirrhotic patients with HCC.

This is a retrospective study of patients with hepatocellular carcinoma on cirrhosis liver diagnosed from January 2009 to July 2019. The diagnosis of HCC was made according to the non-invasive criteria of EASL (existence of a hypervascularized nodule at early arterial time (wash-in) with washing (wash-out: hypodensity or hypointensity compared to the non-tumoral hepatic parenchyma) in the portal phase or in the late phase compared to the non-tumorous parenchyma tumor) with the use of histology for doubtful cases. The degree of hepatocellular insufficiency was defined by the CHILD score. The response to treatment was evaluated at 1 month then 3 months for per cutaneous treatment, 3 months for hepatic resection and Sorafenib and according to the RECIST criteria for transarterial chemoembolization (Complete response if complete disappearance of the enhancement of the treated area, partial response if reduction >50% of the viable part of the target lesion, progression if increase  >25% of the viable part of the target lesion or new lesion, stability in other cases).

The results were analyzed using the Statistics Package for Social Science software (SPSS version 20) for Windows. Quantitative variables were expressed as average ± standard deviation. Qualitative variables were expressed in number and percentage (%). Multivariate analysis was performed with a binary logistic regression model to identify prognostic factors and we considered significant a p≤0.05. Survival data was analyzed by Kaplan Meier method.

Table 1: Characteristics of the studied population. 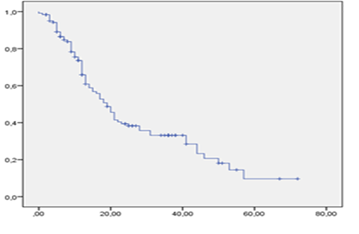 Figure 1: Survival curve for patients with HCC on cirrhosis liver.

Prognostic studies in HCC are often unsatisfactory because patients included are heterogeneous. Tumor staging at the time of diagnosis is essential to decide which type of therapy is the most appropriate for patients. Several alternative staging systems have been proposed. The CLIP studies identified five independent prognostic variables: Child-Pugh class of cirrhosis, tumour size, number of lesions, presence/absence of portal vein thrombosis, and serum levels of AFP [4]. The Okuda system is a prognostic score introduced in 1985; it includes the tumor volume, the presence of ascites, and the levels of serum albumin and bilirubin [5].

Our finding of the prognostic indicators of death were the advanced child, AFP level >400 ng/ml, presence of metastases and invasion of the portal vein which joins Tandon et al.  [7], these have shown in addition to the above described prognostic indicators that the clip score is also predictors of death. Grieco A et al. [8] founded that portal vein thrombosis; alpha fetoprotein, total bilirubin, and tumor size were significant predictors of survival. Okuda, CLIP, and BCLC scores were all able to predict survival (p=0.001). They identified two, four, and six risk groups, respectively, with a median survival ranging from 27 to 19 months for Okuda, 30 to 5 months for CLIP, and 43 to 7 months for BCLC. According to Marrero et al.  [9], the independent predictors of survival were performance status (P < .0001), MELD score greater than 10 (P=0.001), portal vein thrombosis (P=0.0001), and tumor diameter greater than 4 cm (P=0.001). The Barcelona Clinic Liver Cancer (BCLC) staging system had the best independent predictive power for survival when compared with the others prognostic systems.

The future in terms of predictor factors of survival in HCC will certainly go towards the study of molecular phenotypes this is what has shown Calderaro J et al. [10] who concluded that HCC phenotype is tightly associated to its molecular alterations and underlying oncogenic pathways. The study evoked a novel subtype of HCC, designated as "macrotrabecular-massive" associated with poor survival (p<0.001), high alpha foeto-protein serum level (P=0.02), vascular invasion (P<0.001), TP53 mutations (P<0.001) and FGE 19 (P=0.02).

Hepatocellular carcinoma remains a tumor with a poor prognosis. The prognostic indicators of death, in our study, were respectively the advanced Child, the rate of AFP >400 ng/ml, the presence of metastases and invasion of the portal vein. Our results should be confirmed in a larger multicenter cohort to study the effect of multiple etiologies, ethnicity, and the effect of various treatments on overall survival. A consensus in prognostic staging for HCC is urgently needed to assure progress in the development of biomarkers for early detection and novel therapies.

All authors agree with the content of the manuscript and there are no conflicts of interests between them.