#Authors were contributed equally to this work

Case Summary: We report the case of a 43-year-old man with differentiated thyroid cancer. He underwent a total thyroidectomy plus a right latero-cervical lymphoadenectomy. Histological examination revealed a 7 mm papillary thyroid cancer, pT3N1b. Firstly treated with locoregional treatment. In February 2012 computer tomography (CT) scan and WBS showed a progression of disease with bilateral lung lesions, bilateral multiple jugular carotid lymphnodes and bone metastases localized in the IV thoracic rib. After progression disease he was treated with Lenvatinib 24 mg daily. Symptomatic choroid metastases were diagnosed 4 years after initial diagnosis, and were treated with external-beam radiation. Although treatment reduced local masses, a rapid progression of multiple metastatic lesions was observed. Conclusion: In our case, progression free survival with lenvatinib was in agreement with data of SELECT trial, this is a rare case of choroidal metastases from DTC.

Thyroid cancer(TC) is the most common endocrine malignancy with steadily increasing incidence over the past several decades. This increase is likely due to a better detection since the majority of new cases are small intrathyroidal tumors, discovered incidentally by sensitive neck ultrasound [1, 2]. Differentiated thyroid carcinoma (DTC) is the most common form, representing more than 90% of all thyroid cancers and derives from the follicular cells of the thyroid; it includes papillary (PTC) and follicular carcinomas (FTC). Medullary thyroid carcinoma (MTC) accounts for about 2-3% of thyroid cancers and derives from the neuroendocrine “C” cells of the thyroid gland. Anaplastic (undifferentiated) thyroid carcinoma (ATC) represents the remaining 2%.

A good overall prognosis generally applies to young patients with DTC, with no extension beyond the thyroid capsule or absent local/distant metastases. These patients experience a high 10-year survival (about 85%) with standard primary treatment, including surgery and radioiodine therapy. Nevertheless, DTC can metastasize and patients with locally advanced or metastatic disease can become refractory to treatment with radioiodine. This subgroup of patients has a poor overall prognosis and an overall survival rate of less than 15% at 10 years [3]. Metastatic MTC and ATC have most poor prognosis. Conventional therapy, including radiotherapy and chemotherapy, is unsatisfactory for patients with metastatic MTC, ATC or DTC, progressing despite radioiodine and TSH suppressive thyroid hormone therapy. Thus new therapeutic approaches are needed [4, 5].

Recently the knowledge of molecular basis of thyroid cancer and genetic critical pathways involved in the development of specific histological subtypes has led to the development of new drugs whichtargetthese pathways. Targeted therapy refers to a new generation of cancer drugs able to interfere with a specific molecular target, typically proteins that have a critical role in tumor growth or progression. Therefore, the objective of this therapy is to disrupt pathways that are inappropriately activated in cancer cells [6]. Many tyrosine kinase inhibitors (TKIs) have been studied in patients with thyroid carcinoma (TC).

The recent American Thyroid Association (ATA) Guidelines for differentiated thyroid cancer suggest that the tyrosine kinase inhibitors are indicated in R A I- refractory DTC patients with metastatic, rapidly progressive, symptomatic and/or imminently threatening disease not sensible to local control using other approaches. Sorafenib and Lenvatinib were approved by the FDA for treatment of differentiated thyroid carcinoma in locally recurrent or metastatic, progressive DTC [7, 8]. Here we report a case of a patient with radioiodine refractory DTC treated with lenvatinib 24 mg daily obtaining a good PFS and presenting with symptomatic bilateral choroidal metastases four years after his initial diagnosis.

A 43-year-old man with a longstanding multinodular goiter, presented with a painless right latero-cervical mass in March 2009. Ultrasound examination revealed a 9 mm nodule, in the right lobe of thyroid, with suspicious right latero-cervical neck lymphoadenopaty. He underwent a total thyroidectomy plus a right latero-cervical lymphoadenectomy. Histological examination revealed a 7 mm papillary thyroid cancer, follicular variant. According to TNM classification, the tumor was staged as pT3N1b (7/27 positive lymph nodes). The post-operative staging was positive for lung metastases and the patient received, between July 2009 and July 2011, three radioiodine treatments (total dose 300 mCi131I ). At the time of the first treatment cervical radioiodine uptake was 0.64% at 24 hour; serum Tg level 8,25 ng/ml and TSH 43 uU/ml. In June 2010, the patient received 100 mCi 131I; Tg was 16 ng/ml, TSH 34 uU/ml. Total body scan (TBS) showed only a right cervical radioiodine uptake and Tg was positive. In July 2011, the patient received the third radioiodine treatment, a TBS documented the same areas of increased activity already observed at previous scan. In addition level of Tg was 1014 ng /ml and TSH was 52 uU/ml. In February 2012 computer tomography (CT) scan and WBS showed a progression of disease with bilateral lung lesions, bilateral multiple jugular carotid lymphnodes and bone metastases localized in the IV thoracic rib (Figure 1-2).

In May 2012 the patient was enrolled in a clinical trial with lenvatinib (SELECT ), 24 mg total daily dose. From May 2012 to March 2013, a decrease of pulmonary nodules was observed by CT scan (Figure 3a-b). A decrease of Tg was evident from May 2012 to September 2012, followed by stabilization (Figure 4). In March 2013 a bone disease progression was observed and thyroglobulin increased from 188 ng/ml to 4873 ng/ml (Figure 4). Progression free survival of the patient was about 11 months in agreement with the results reported by the pivotal trial (SELECT). Therapy was well tolerated, reporting only hypertension grade 1, registered after 2 months of therapy and controlled with adequate medical therapy. Sporadic diarrhea was referred during treatment and was resolved by loperamide. 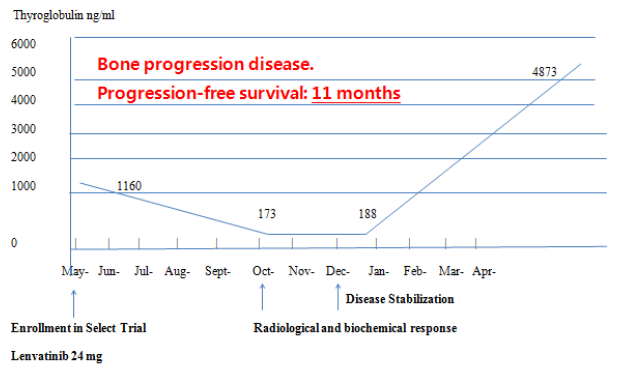 In July 2013, the administration of Lenvatinib was stopped and the patient received external-beam radiation to the retro bulbar space, consisted in a total dose of 30Gy, with benefits on visual symptoms. Unfortunately, despite good regression of brain lesions, a bone disease progression with pain was observed in September 2013. Patient was treated with two cycles of doxorubicine 60 mg/m2 once every three weeks. In November 2013, a TBS revealed a rapid lymphnodal and lung disease progression and patient received a new treatment with three cycles of Vinorelbine 30 mg/m2/weekly and 5-fluorouracil 750 mg/m2/die e.v. weekly, whit concomitant zoledronic acid bolus, 4 mg once every 28 days. A further clinical worsening led patient to exitus (Table 1).

Thetyrosine kinase inhibitors (TKIs) aim to inhibit tumour angiogenesis and have a significant role in treatment of thyroid cancer. A phase III trial (DECISION) of sorafenib in radioiodine (RAI)-refractory thyroid cancer showed a median progression-free survival (PFS) of 10.8 months in the sorafenib group, compared to 5.8 months in the placebo group. Lenvatinib, also approved for RAI-refractory thyroid cancer, is an antiangiogenic TKI that inhibits the VEGF1–3, PDGF, KIT, RET receptors, FGF1–4. FGFR plays a key role in the development of resistance against anti-angiogenic drugs. In a phase III trial (SELECT) on RAI-refractory DTC, the Lenvatinib group showed a PFS of 18.3 months, compared to 3.6 months in the placebo group [9]. Our patient with diagnoses of RAI refractory DTC, received treatment with lenvatinib 24 mg showing a good PFS and adequate safety in agreement with data of registrative trial.

The patient on progression to lenvatinib showed an aggressive disease with rare metastases localized in choroid in addition to lymph nodes, lung and bone. Metastatic thyroid carcinoma rarely involves the orbit. In spite of being infrequent from all cancer type, the most frequent origins of orbital metastases are breast, prostate, kidney and melanoma, and less frequently arising from prostate, kidney and gastrointestinal tract tumors [10]. Besides the 22 cases of thyroid carcinoma with metastases to the choroid reported in a review from 1979 to 2012 [11], other 10 cases have been reported up till now [12-21]. Among the 32 cases reported in literature, the most common primary tumor was papillary thyroid carcinoma, occurred in 13 cases [11-17]. In 9 cases primary tumour was follicular hystotype and in 6 cases medullary thyroid carcinoma [11, 18-21].

As in our case, choroidal metastases were reported later in the course of the disease. The diagnosis of choroidal metastasis from thyroid carcinoma is usually based on clinical judgment and results of non invasive diagnostic techniques such as ultrasonography, transillumination, CT, and/or MRI scanning. Because a very limited number of patients have been reported, no data exist describing the best and most effective treatment of this condition. Treatment options for choroidal metastases secondary to DTC included131I ablation therapy, external beam radiation and surgical enucleation. Enucleation is the treatment of choice in choroidal and/or orbital metastases causing significant loss of vision and/or persistent symptoms such as pain [22]. In our patient, external-beam radiation resulted in satisfactory regression of the bilateral choroidal masses and represents a valid option of treatment. Although infrequent, orbital metastasis from thyroid carcinoma are possible correlating with a worse prognosis.

Treatment with TKI is a standard of care in advanced RAI refractory DTC showing an advantage in PFS and a good tolerability. Although it is extremely rare, the possibility of choroidal metastasis should be considered in case of pain or loss vision in patient with long history of thyroid malignancy due to progression disease. Periodic ocular examination is necessary to detect these metastases earlier and even in case of asymptomatic presentation.

The authors thank the patient involved the study.