Methods: Data was extracted from patients with stage I/II ovarian cancer from 1999 to 2010 at our institution. Patients were classified into mucinous group (n=45) and non-mucinous groups (n=159). Clinical features and survival outcomes were compared between the two groups.

Results: The 3-year/5-year progression free survival (PFS) of the mucinous were significantly longer than the non-mucinous group (96% /91.0% vs. 82.4% /75.1%, P=0.01). 40.0% of mEOC patients underwent systematic lymphadenectomy, and there was no significant differences of recurrence rate whether they received this procedure. 35.6% patients of mEOC underwent FSS and none of them experienced recurrence. 68.8% of mEOC patients received adjuvant chemotherapy.

Conclusion: mEOC has longer PFS than other histologic types. Systematic lymphadenectomy may be omitted in mEOC patients.

Growing evidence suggests that primary mucinous ovarian carcinomas have a distinct clinical features and course when compared to non-mucinons ovarian carcinomas [1, 2]. Patients with mucinous carcinoma of the ovary are often diagnosed with early-stage disease and have a good prognosis. One study reported a startling 87% of mucinous ovarian cancer confirmed at stage I [3]. The 5-year progression-free survival (FPS) is about 80% to 90% at early stage [4]. The majority of mEOCs are moderate or well-differentiated. mEOC is less aggressive and has a lower rate of lymphatic metastasis compared with other types [5].

Mucinous epithelial ovarian cancer is a separate entity requiring specific treatment. Some studies indicated that systematic lymphadenectomy may be omitted in early stage cases [6]. For adjuvant chemotherapy, some clinicians suggested the gastrointestinal regimens are appropriate because mucinous carcinomas of the ovary are similar to gastrointestinal tumors. The tailored treatment for mucinous ovarian cancer is still unknown because its rarity. We retrospectively analyzed all early stage (FIGO stage I-II) mucinous ovarian cancers over ten years in Chinese National Cancer Center/Cancer Hospital. The aims of this study were to provide the clinical and pathologic features and explore proper treatment of mEOC.

Medical charts of patients diagnosed with early stage ovarian cancer (EOC) from 1999 to 2010 at National Cancer Center/Cancer Hospital were reviewed. The data of patients with non-mucinous early stage ovarian cancer was also obtained for comparison. Pathological slices were reevaluated and restaged based on the 2014 International Federation of Gynecology and Obstetrics (FIGO) ovarian cancer staging criteria [7]. This study underwent appropriate IRB approval. Patients with borderline mucinous carcinoma and mucinous carcinomas metastatic to the ovary from other primary sites were excluded. No patients in final analysis were treated before the surgery. The time from surgery to recurrence or last disease-free follow-up time was calculated as progression free survival (PFS). Few early stage mucinous cancer patients died in our study; thus overall survival time was not calculated in our study.

The population was classified according to histologic diagnosis as the mucinous group and three non-mucinous groups (serous group, endometrioid group, and clear cell group). Continuous values were expressed by mean ± standard deviations or median value and were tested by t-tests or Mann-Whitney tests. Categorical variables were compared using Chi-square tests. PFS times were calculated by Kaplan-Meier analysis. We applied the log-rank test and cox regression between survival curves for univariate analysis and multivariate analysis respectively. A P value of less than 0.05 was considered statistically significant. Data were analyzed using SPSS 20.0 software.

204 early stage ovarian cancer patients were included in the final analysis, in which mucinous subtype occupied 22.1% of the population. Patients were classified as mucinous group (n=45/22.1%) and other three control groups (n=159/77.9%). The most common pathologic type for non-mucinous group was serous adenocarcinoma (n=88/43.1%), followed by endometrioid carcinoma (n=37 /18.1%), then

For primary surgical treatment, our study indicated that systematic pelvic lymphadenectomy may be omitted in mucinous ovarian cancer patients with tumors grossly confined to ovaries if suspicious lymph nodes were not detected during surgery. In our study, 40.0% mucinous patients received systematic lymphadenectomy and 60.0% patients only had lymphatic sampling or no lymph nodes dissection. Survival analysis could not be performed because only five patients experienced recurrence and one of them died. Chi-square analysis showed that there were no significant differences of recurrence rate between two groups. Fertility sparing surgery (FSS) may be considered in selected mucinous ovarian cancers. 35.6% patients of mucinous tumors underwent FSS and none of these patients experienced recurrence after at least 59-month follow-up (Table 2). 64.4% mEOC patients received postsurgical chemotherapy (paclitaxel plus carboplatin or cisplatin). None of patients opted observation after surgery relapse (Table 2).

Table 1: Clinicopathological characteristics and treatment according to histological subtype. 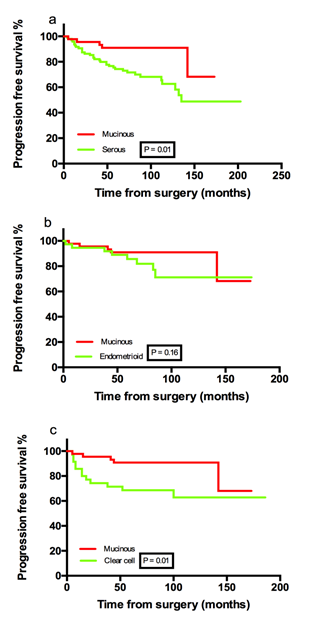 The studies on mEOC are limited because its rarity. It is showed that the mEOC had a low incidence, ranging from 3% to 5% in EOC population [3, 8]. Mucinous ovarian cancers tend to present at early stage. In a large scale central pathologic review, 70.3% of mEOCs were classified as stage I-II [2]. In our study, mEOC accounted for 20.3% early stage epithelial ovarian cancers. The 3-year/5-year PFS of patients with mucinous tumors in this study were 96% /91.0%. Because only 3 stage II mEOC patients were included, the calculated PFS rates reflected the prognosis of stage I mEOC rather than early-stage mEOC in our study. The result was consistent with a study involving 410 patients with stage I mEOC which reported the 5-year PFS was 90.8% [9]. In all, our studies demonstrated that early stage mucinous ovarian cancers enjoy pleasant prognosis; less aggressive treatment may be considered for these patients.

The value of systematic lymphadenectomy should be reconsidered for early stage mucinous ovarian cancers. Several studies reported that the prevalence of lymphatic metastasis in patients with mucinous tumors was excessively rare. A review include 14 studies showed that only 2.6% of stage I-II mucinous ovarian cancer had lymph node metastasis. Two studies involving 295 mEOCs, grossly noted to be stage I, found no lymph node involvement in all the 113 patients who underwent lymphadenectomy; the authors also showed that the lymphadenectomy did not improve prognosis [6, 10]. In our study, systematic pelvic lymph node dissection was performed in 40% mucinous ovarian cancer patients, and had no effect on recurrence rate. For 5 mucinous tumor patients experienced recurrence, only one did not receive lymph node dissection. Our study preliminarily supports the previous studies and challenges the necessity of lymphadenectomy in early stage mEOC. FSS seems a safe option for mucinous ovary cancer patients without obvious risk factors. In our study, 35.6% patients of mucinous tumors underwent FSS and none of these patients experienced recurrence after at least 59-month follow-up. Our institutional experience suggest that young patients with stage IA well-differentiated mucinous tumors may chose FSS and observation after surgery.

Adjuvant chemotherapy for Meoc is interesting. Despite a better prognosis at early stage, mEOC seems have worse PFS and OS compared with non-mucinous histologic types when it progresses into advanced-stage; most authors attributed this to more intensive chemo-resistance [11-13]. The chemo-resistance nature of mucinous ovarian cancer challenges the value of chemotherapy for early stage patients. In our study, only 14 stage IA/B mucinous patients were exempted from chemotherapy; these patients were all well-differentiated with or without completed staging surgery or FSS. After a minimum follow-up of 40 months, no recurrence was observed. It is implied that for stage I mucinous ovarian tumors without risk factors (IC, moderate/poor differentiation), even for those who did not receive completed staging surgery, observation after operation may be a safe option.

When stratified according to differentiation, the prognosis of mucinous and non-mucinous early-stage EOC was similar in our study. Several studies indicated that well-differentiation contributed to the good prognosis of mEOC. One study reported that tumor grade, not histology, independently predicted the relapse of stage I ovarian tumor [14]. Our study revealed similar results. Multivariate analysis showed that stage and differentiation, rather than histology, appeared to be independent prognostic factors in early stage ovarian cancers.

Our study also gave clues to why mEOC can be detected at an early stage. It is observed that mEOC tends to have a larger tumor volume with an intact capsule than other histologic types. The mean/median diameter of ovarian mass in our investigation was 19.9/18 cm, which was significantly larger than other types. The positive rate of ascites or peritoneal washing was also lower than the non-mucinous group in our analysis. It is reasonable to speculate that the mEOC patients may have more symptoms due to the large mass but, there is less of a chance for the cancer to spread.

In conclusion, most of mucinous ovarian cancers are diagnosed at an early stage with good pathologic features. The overall prognosis of early stage mEOC is better than non-mucinous counterparts. The treatment of early stage mEOC should be tailored. The extension of surgery and administration of adjuvant chemotherapy in a subset of early-stage mEOC patients should be explored by future studies.