Solitary fibrous tumor (SFT) is a rare soft tissue tumor occurring rarely in extrapleural sites like the pelvis. We here present a case of SFT of the pelvis which was initially diagnosed radiologically as a mass arising from prostate and on biopsy found to be a solitary fibrous tumor. On exploration, there was a well encapsulated tumor in retro-vesical space separate from prostate. Histopathology with Immuno-histochemistry confirmed the diagnosis of SFT. We retrospectively reviewed the literature to avoid such confusion in future. Pubmed search was made with the following keywords: solitary fibrous tumor, treatment, soft tissue, pelvis, radiology, and histopathology.

SFT is a rare soft tissue tumor and even rarer in pelvic soft tissue [1]. The knowledge of extraprostatic versus prostatic site of origin can avoid unnecessary cystoprostatectomy and its related morbidities especially when a tumor is large in size as it is very difficult to diagnose the site of origin based on available preoperative parameters. We retrospectively analyzed the factors which may lead to the diagnosis of the tumor site preoperatively and precautions to be taken during surgery if the site of origin is not known.

A 58 years old male patient presented with obstructive LUTS lasting for 3 months duration with increasing severity till he developed retention. On DRE there was grade III enlargement of prostate which was nodular, nontender with obliterated midline sulcus. His laboratory investigations were as follows: creatinine 1.0 mg/dl, PSA 0.8 ng/ml, urine culture showed no growth of organisms and LFT were within normal limits. CT scan of abdomen and pelvis showed
15 × 10 cm mass lesion arising from prostate without significant lymphadenopathy (Figure 1). TRUS guided biopsy showed mesenchymal tumour. Subsequently IHC was done which was suggestive of SFT (vimentin+, desmin+, CD34+). Institutional tumour board discussion suggested upfront surgery in view of localised disease. On exploration the tumour was approached first and dissected from all sides before approaching the bladder pedicles. The tumour was separate from prostate and bladder and was arising from soft tissue of pelvis. Post operative period was uneventful and patient was discharged on 4th post operative day. Histopathological examination revealed Solitary Fibrous Tumour confirmed on IHC with positivity for actin, vimentin, desmin, CD34, S100 and AE1. The patient is in followup for 1 year now and is recurrence free. 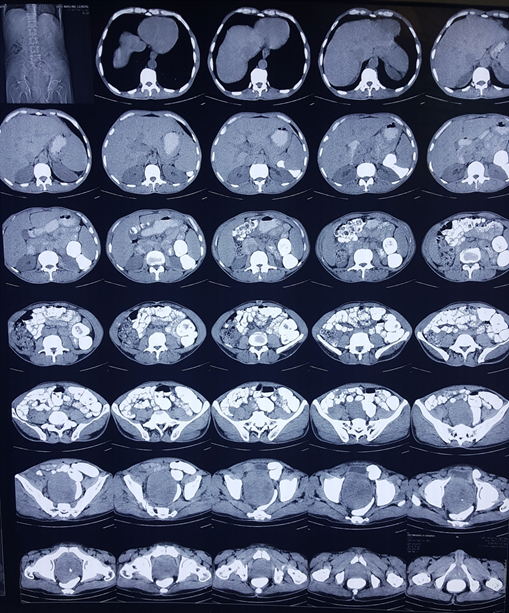 SFT is a rare tumor, originally described in pleura [1]. It is rarer in retroperitoneum and less than 30 cases have been reported in the literature [2]. SFT of pelvic soft tissue usually occurs in retrovesical or perivesical space. It can be easily mistaken for a mesenchymal tumor arising from prostate especially if a tumour is large and occupies the whole pelvis making it difficult to diagnose the site of origin. We retrospectively tried to analyze the factors that could help us in diagnosing the site of origin for better planning and management.

Clinically pelvic SFT can be abnormally large in size producing symptoms due to compression of surrounding organs [3]. It is usually painless unless pain caused by compression of surrounding nerves. It may present as dysuria, acute urinary retention, hydroureteronephrosis constipation or even isolated pollakiuria [4, 5]. Bearing the fact that mass arising from the prostate may present with any of the above-mentioned symptoms, it is very difficult to diagnose the site based on clinical findings alone [6]. Serum PSA level is perceived to help in the diagnosis of the mass arising from the prostate may have high levels but the reliability is doubtful as in certain varieties of prostatic malignancy like the neuroendocrine differentiation, sarcoma or prostatic SFT it remains normal.

Radiologically CT scan in a case of pelvic SFT may show large mass with compression of surrounding organs. Wignall et al concluded that 56% of SFT had a size of >10 cm, all had discrete margins with majority had lobulated contours and heterogeneous strong enhancement. The local invasion was found in 9% of cases [7]. Theoretically, SFTs tend to be well encapsulated with preserved fat planes unless they are locally invasive. However definite criteria to differentiate it from a mass arising from prostate are not very well defined. Yiming et al have reported that prostatic SFT may present with a diameter of 4.7?25 cm average size being 9.8 cm. So even prostatic SFT can present as large mass.

Biopsy of a tumour provides definitive histological diagnosis although it may not differentiate between prostatic and extraprostatic site. Fletcher et al described the classical histopathological findings of SFT with positive results of immunohistochemical testing for Bcl-2 and vimentin and negative results for c-kit [8]. However, Pins et al in their study concluded that prostatic SFTs appear similar to those identified in extraprostatic sites and admixed prostatic tissue is not commonly associated with these lesions [9]. The high rate of recurrence has been reported in cases of prostatic SFT which were managed by TURP since it doesn’t involve complete removal of a tumour [10]. So biopsy is required in all cases of large mass arising in pelvis even if the radiological evidence shows it arising from prostate and PSA is normal.

The management of prostatic SFT includes radical prostatectomy and cystoprostatectomy if the mass is large and infiltrates bladder. Organ preserving complete surgical resection with pathologically negative surgical margins is the aim in case of SFT for good prognosis and since they are well encapsulated in a majority of the cases [1]. So on an exploration of any large pelvic SFT, the tumor should be approached first and dissected from all sides outside the capsule before dealing with the vesical pedicles to avoid inadvertent ligation and thus unnecessary

cystoprostatectomy. The bladder should be removed only if a tumour is locally invasive and it is not possible to develop planes between it and the tumor [11]. Some cases of SFT may have excess vascularity which may lead to torrential hemorrhage and so these should be handled with meticulous care [12]. Fahd-Aghale et al suggested pre operative embolization in large infiltrating SFT of a pelvis, however, could not make a clear statement because of a low incidence of such tumors [11].

SFT of the soft tissue of pelvis is a rare tumor. If a tumour is large, it is not possible to determine the site of origin (prostatic or extraprostatic) based on clinical features, biochemical investigations, radiological features or even biopsy. However preoperative biopsy is advisable in all cases of large masses even if the PSA is normal. On exploration, it is advisable to approach a tumour first and from all sides to avoid inadvertent ligation of vesical pedicles and thus cystoprostatectomy.