Background: Two randomized trials have examined the role of local therapy on survival in the stage IV setting of breast cancer, largely suggesting no benefit. However, the effect of surgery for stage IV disease amongst various breast cancer subtypes is not well characterized. In this study, we aimed to evaluate the survival benefit of surgery in patients with stage IV breast cancer based on molecular subtype.

Conclusion: This study suggest that surgery of the primary breast tumor may have a positive impact on OS and BCSS in patients with stage IV breast cancer, especially in the luminal B subtype.

Breast cancer is a significant health issue and is one of the most frequent types of cancers with increasing incidence rates in the world [1]. Approximately 6% of women with newly diagnosed breast cancer present with stage IV disease in the United States [1, 2]. According to the International Consensus Guidelines for Advanced Breast Cancer (ABC), the standard treatment for stage IV breast cancer patients is systemic therapy, including chemo-therapy, endocrine therapy, and/or targeted therapy [3, 4].

Traditionally, surgical removal of the primary breast tumor has been used only for palliation and relief of symptoms such as bleeding, inflammation, and skin ulceration. To date, the role of primary tumor excision in patients with stage IV breast cancer remains controversial, however randomized data published to date does not show a survival benefit. This uncertainty is illustrated by the National Comprehensive Cancer Network (NCCN) guideline, which states, “the role and timing of surgical removal of the primary (breast cancer) in patients presenting with de novo stage IV disease is the subject of ongoing investigations.” In clinical practice, the molecular nature of the breast cancer subtypes is a major determinant of the type of systemic therapy administered. Significant differences have been observed in response to treatment and survival outcome among the various subtypes. Therefore, accurate prognostication depends on multiple variables (such as ER, PR, HER2, grading, Ki67, age, lymph node involvement) that impact recurrence and survival [5-7]. The primary objective of this investigation was to evaluate the clinicopathologic characteristics of the surgical group and the non-surgical group in patients with stage IV breast cancer. The secondary objective was to investigate whether there is an association with surgical benefit and subtype with regard to the overall survival (OS) and breast cancer-specific survival (BCSS) rates.

From an institutional database, 255 women in Tri-Service General Hospital, Taipei, Taiwan, were consecutively selected from patients with confirmed histopathologic diagnosis with stage IV breast cancer treated between January 2006 and October 2016. Information recorded for patients included age at diagnosis, year of diagnosis, and date of death or last contact. The data also included death from breast cancer or other diseases/reasons ascertained from follow-up lasting until November 2018. Institutional review board approval was obtained through our institution’s human investigations committee.

We collected data on the clinicopathologic characteristics, including clinical T stage, clinical N stage, histological grade (G), estrogen receptor status (ER), progesterone receptor status (PR), the HER2 expression along with treatment factors including surgery, radiotherapy, chemotherapy, targeted therapy and endocrine therapy. In our study, grading was used to capture proliferation activity as described earlier: luminal A (ER+ and/or PR+, HER2–, and G1/2), luminal B (ER+ and/or PR+, HER2–, and G3), luminal HER2+ (ER+ and/or PR+, HER2+, and any grade), HER2-type (ER–, PR–, and HER2+), and triple negative (TN) (ER–, PR–, and HER2–). ER/PR positivity was determined by immunohistochemical (IHC) analysis of the number of positively stained nuclei (>1%+). Tumors were considered as HER2+ when cells presented strong membrane staining (3+). Tumors exhibiting 0 or 1+ staining for HER2 protein overexpression were considered to be HER2−. In cases of equivocal membrane staining (score 2+) for HER2, fluorescence in situ hybridization (FISH) was used to evaluate gene amplification [8, 9]. Patients who did not complete the data of tumor characteristics or treatment were excluded.

Interrelationships between variables were assessed using contingency table analysis with the chi-square test for trend as appropriate. Univariate and multivariate survival analyses were performed using the Kaplan-Meier analysis and Cox proportional hazards model with a stepwise backward elimination to derive a final model of variables with a significant independent relationship with OS and BCSS. All statistical analyses were 2-sided with significance defined as a P value <0.05. Statistical analyses were performed using SPSS, version 22.0, statistical software (IBM, Armonk, NY).

HER2=human epidermal growth factor receptor 2. a. The total number of cases and controls does not correspond because of missing data. b. P value from two-sided x2 test. *Statistically significant

Table 2: Outcome of survival rate according to clinical characteristics and surgical groupsa. 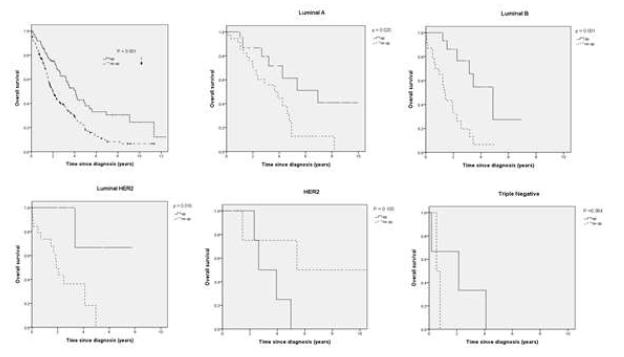 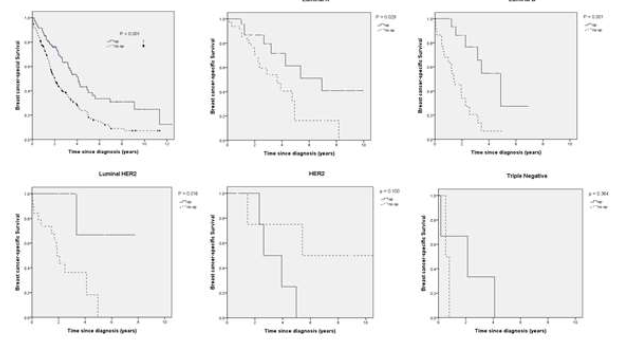 Based on the International Consensus Guidelines for ABC, systemic therapy is the mainstream treatment for patients with stage IV breast cancer. The role of surgical excision of the primary tumor in stage IV breast cancer has been controversial due to conflicting outcomes from both retrospective and prospective studies. Some observational studies have shown that 35–60% of breast cancer patients with stage IV disease at diagnosis received surgical extirpation of the primary tumor and that this treatment was associated with a survival advantage [10-12]. A review of retrospective studies on the management of de novo metastatic breast cancer has largely shown mixed findings, with some studies reporting an improved OS with surgical intervention [2, 10, 13-16]. Other retrospective studies accounting for selection bias in the surgical group, mainly through matched pair analysis, show this survival benefit may no longer be apparent [17-19]. Two prospective randomized trials led by Soran et al. [20] (Turkey) and Badwe et al. [21] (India) evaluated the effect that removal of the primary tumor and axillary lymph nodes had on OS and progression-free survival. Soran et al. [20] presented the first randomized study to show a statistically significant improvement in median survival with surgery for patients with de novo stage IV breast cancer at the 5-year follow-up assessment. Notable limitations for this trial include that patient with HER2-positive disease were not treated with HER2-directed therapy, which would not be considered standard of care in most developed countries. In contrast, Badwe et al. [21] reported that locoregional resection of the primary tumor did not increase OS for the patients who had responded to frontline chemotherapy.

In the United States, it would be difficult not to initiate systemic therapy up front for patients with de novo metastatic breast cancer. One study, which addresses the role of systemic therapy followed by surgical intervention in this subgroup, is the United States-based Translational Breast Cancer Research Consortium (TBCRC) 013 trial, a prospective registry trial that enrolled 112 patients with an intact primary tumor between 2009 and 2012 at 14 institutions [22, 23]. After the patients had received first-line therapy by their treating providers, all the responders (94 patients, 85%) were considered for elective surgery. A multivariable analysis showed that surgery of the primary cancer did not improve overall survival among the responders with a median survival of 71 months versus 65 months for the patients without surgery (or 30-month survival rates of 77 and 76%, respectively; p=0.85). As such, we await the findings of prospective randomized trials (Eastern Cooperative Oncology Group [ECOG] 2108) to help add clarity to this controversy. In ECOG 2108, patients with disease who do not progress during initial systemic therapy and were stratified by molecular subtype are randomized to continued systemic therapy versus surgery with intention for negative surgical margins, either through breast-conserving therapy involving lumpectomy and radiation therapy or total mastectomy with or without radiation.

In many of the retrospective studies, women who received surgery tended to be younger, have smaller tumors, fewer comorbidities, lower burden of metastatic disease, were less likely to have visceral metastases, and more likely to have access to better care [10, 24]. The absolute survival benefit observed for women with small primary breast tumors is also consistent with a previous meta-analysis [24]. Thomas et al. [10] reported that women with larger tumors received surgery less often, which mirrors our findings. According to our database, only 39% of women who presented with stage IV breast cancer received surgery to the primary tumor. We found that patients who received surgery tended to have smaller tumors and fewer lymph node metastases. Breast cancer outcomes are steadily improving, and the paradigm shift of viewing stage IV disease as a chronic illness to be managed, rather than a terminal event, suggests that the role of surgery will be constantly evolving. There are several potential limitations to this study. First, the data used in this study are retrospective and not randomized. Second, the small sample size may limit our study’s findings especially when stratifying by molecular subtype. In conclusion, we found that surgery of the primary breast tumor has a positive impact on OS and BCSS in stage IV breast cancer patients among subtypes, especially in the luminal B subtype.

The authors would like to thank Enago (www.enago.tw) for the English language review.