Liver cancer is a rapidly lethal cancer and is on the rise worldwide. Surgery is a gold standard treatment for primary liver cancer and liver metastases, however, non-surgical locoregional treatment options are of increasing clinical interest when tumor size, number and sites permit. Previous studies underline immunomodulatory effects of radiofrequency ablation (RFA) in patients with liver cancer. RFA seems to promote effector immune cell frequencies and diminishing immunosuppressive leukocytes. Nevertheless its impact on extracellular tumor matrix is practically uncovered. Herein we report on the differential effects of RFA and surgical liver resection on serum level of anti-inflammatory marker IL-10 in patients with hepatic cancer.

Liver cancer is a highly lethal tumor and the third most common cancer of digestive system according to SEER data. Surgery has always been regarded as a gold standard treatment for liver cancer. In recent years, however, patients with liver cancer are often managed by non-surgical locoregional treatments including ablative therapy (radiofrequency ablation, microwave ablation, cryoablation and so on). Among them radiofrequency thermal ablation (RFA) represents a minimal invasive treatment option and demonstrates good survival rate over the surgical resection when the tumor size is <3 cm [1-3]. RFA results in higher rate of tumor necrosis, nevertheless tumor size, number and sites are of central importance when performing RFA. In addition to its clinical benefits, experimental studies report that RFA provides adjuvant/”danger” signals to the immune cells, as a consequence it stimulates CD4+ T helpers and causes a drastically increase of antigen-specific CD8+ T cells within the tumor microenvironment and tumor-draining lymph node [4-6]. In light of its immunomodulatory effects, we have recently demonstrated than RFA application correlates with the diminished NLR and PLR and reduced frequencies of CD4+CD39+ lymphocytes in patients with liver cancer [7]. We and others have additionally shown that the decrease of certain immunoregulatory markers corresponds to a better survival of patients with hepatic cancer [7, 8]. Therefore, RFA, by influencing tumor microenvironment, potentially imposes the immune surveillance of cancer calls. Importantly, however, cellular composition of tumor microenvironment and immune cell recruitment at tumor beds are largely guided by extracellular matrix proteins such as cytokines and chemokines which are negligibly explored in regards to RFA treatment [9, 10].

Among several regulatory cytokines, numerous studies have uncovered the cardinal role of IL-10 not only in deviating anti-inflammatory immune responses in patients with liver cancer, but also in influencing the malignant transformation of hepatocytes [11, 12]. IL-10 triggers the upregulation of Bcl-2 and the downregulation of apoptosis [12]. Interestingly, HCV patients with high serum level of IL-10 are more susceptible to develop HCC than ones with low IL-10 [13]. Though, liver fibrosis and necrosis support lowering IL-10 in such patients [13-15]. Studies also support to the knowledge that IL-10 assists the detachment of tumor cells from their primary sites and promotes the development of metastases [13]. Thus, IL-10 represents an important target of intervention and treatment of hepatic cancer.

Herein we report on the differential effects of RFA and LR on serum IL-10 levels in patients with hepatic cancer. Such findings should facilitate the patients selections for effective treatment options and could broaden the armamentarium of successful application of RFA.

A total of 17 patients with primary (HCC and Cholangiocarcinoma) and secondary (metastatic) liver cancer were enrolled in our study. The study was approved by the Ethic Committee of the Tbilisi State Medical University and informed consent obtained from each recruited patient in accordance with the Declaration of Helsinki. Out of 17 patients, 7 were referred to RFA procedure and another 10 underwent surgical liver resection (LR). All decisions regarding procedures were tabled by MDT (Multidisciplinary Team). The inclusion criteria for the RFA patients selection were as follows: a) extensive liver disease or medical co-morbidities associated with tumor vascular invasion and thromboses,  b) fewer than three nodules without extrahepatic metastasis, c) largest tumor size of 3-4 cm in diameter, d) visualization of the nodule during the planning of RFA by ultrasonography. The exclusion criteria included treatment by chemotherapy or TACE, RFA or LR within previous one month. Within LR group, 3 patients underwent anatomic segmental hepatectomy and non-anatomical resection was done in 7 patients. None of the patient in either group had received chemotherapy or any other treatment a month before or 3 months after the LR and RFA procedure. Healthy age-matched 14 volunteers without a history of cancer, recent acute or chronic infectious disease, or autoimmune disease, were used as controls.

An image-guided RFA procedure was performed as described in [2]. Briefly, the tumor was localized and RF antenna introduced into the target tissue under ultrasound guidance. RF processing increases temperature into the target tissue up to 1020C leading to the irreversible damage by coagulative necrosis. Abdominal contrast computed tomography (CT) was performed to document completeness of the procedure. Liver resection (LR), both anatomic segmental hepatectomy and non-anatomical liver resection, were carried out under the general anaesthesia using an upper middle incision, using non-RF based liver resection devices.

Blood samples were collected from each patient at the diagnosis and after 1 and 3 months of treatment (RFA or LR). The following serum cytokines: IL-10, IL-17, INF-γ, TGF-β were assayed by ELISA (ebiosciences, USA). Data were analyzed using Graph Pad Prizm software and the Student’s t- test was applied to compare data between RFA and LR groups. Furthermore, both study groups were compared with healthy control subjects. P values less than 0.05 were considered as statistically significant.

We and others have previously reported that the destruction of tumor microenvironment by RFA results in accumulation of necrotic cancer cells, release of a wide spectrum of tumor antigens and adjuvants therefore favoring effector immune responses [4-6]. We have also demonstrated that besides the elevation of pro-inflammatory immune cells, RFA triggers the diminution of immunosuppressive cells in blood of patients with hepatic cancer [7]. However, changes in immune cell characteristics largely reflect the altered extracellular matrix composition. Data on pro- vs. anti-inflammatory cytokines and chemokines are still limited in patients receiving RFA.

A total of 17 patients with liver cancer was included in the study. Patients’ demographic characteristics have been listed and compared between treatment groups in Table 1. The mean age of patients in RFA and LR group was 55.1 ± 11.2 years and 58.6 ± 8.1 years respectively (p>0.05). There were 3 women (43%) and 4 men (57%) in the RFA cohort whilst, 5 women (50%) and 5 (50%) men in the LR group. No significant differences were observed between groups regarding the number of tumors, tumor size, tumor stage, HBsAg, Anti-HCV positivity. 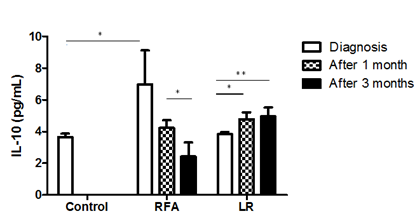 Cytokines are the main mediators for the growth, invasion and metastasis of cancer. They are produced by cancer cells as well as immune and stromal cells in the affected area and are responsible for further uncontrolled proliferation of malignant cells, remodeling of the tumor microenvironment, triggering of intrinsic inflammation, recruiting of cells, angiogenesis and cancer cells spread [16]. Pre-treatment serum level of cytokines also widely varies in patients with liver cancer and highly determines prognosis of diseases. Il-10 is a key anti-inflammatory cytokine which is often correlated with the disease prognosis in patients with solid tumors, including those with primary or metastatic hepatic cancer. Tumor cells and tumor-in?ltrating immune cells are the major source of IL-10 in the extracellular matrix [17]. In tumor microenvironment, it exerts immunosuppressive effect on antigen presentation and recruitment of effector lymphocytes therefore supporting escape of tumor cells from immune recognition. IL-10, together with TNF-a, stimulates the expression of negative costimulatory molecule B7-H1(PDL-1) on macrophages in an autocrine manner, thereby impairs CD8+ T cell activity and supports tumor progression [17].

Previous reports demonstrate that IL-10 modulates liver ?brogenesis and promotes carcinogenesis [13-15]. Interestingly, Aroucha et al reported that the severe necro-in?ammatory state is associated with low IL-10 production in HCC patients [18]. In this line, our results revealed that, RFA, which establishes severe necro-in?ammatory state, significantly lowers serum levels of IL-10, in contrast to LR. This data indicate that tumor removal itself does not impact IL-10 and this process is more complex involving microenvironmental remodeling.

Noteworthy to highlight that opposite to RFA, patients in LR group showed elevated IL-10 levels that kept increasing 3 month post surgery. It has long supposed that local immune responses to surgery lead to systemic proinflammatory and immunosuppressive phases: production of a variety of cytokines, leading to a general inflammation: stress, activation of hypothalamic-pituitary-adrenal axis, release of steroids, such as cortisol, facilitates to the healing of injured tissues. Immunosuppressive phase avoids autoreactivity but on the other hand, it can inhibit antitumor Th1 immune response, provoke development of postoperative immune suppression and stimulate tumor cells growth.

In conclusion, RFA and LR have a distinct impact on tumor microenvironment and its further exploration should, in a long term, improve the guidance of treatment in clinical cases.

The authors declare that there are no conflicts of interest regarding the publication of this manuscript.