Background: The use of intraoperative mobile gamma camera that provide real-time intraoperative images of the sentinel lymph node (SLN), in combination with hand held gamma probe, is assumed to increase the accuracy of yielding the SLN, in early breast cancer patients, with more proper site localization.

Methods: It was a prospective study on 30 patients, with breast cancer scheduled SLN. biopsy in the National Cancer Institute, Cairo University, Egypt. From January 2015 till December 2015. A new device (intraoperative mobile gamma camera) was used in conjunction with a gamma probe in early stage breast cancer patients.

Results: The hand held gamma probe detected SLNs in 28 out of 30 (93.4%) patients, while the intraoperative mobile gamma camera detected SLN(s) in 29 patients out of 30 (96.7%) patients. In total, 59 SLNs were found using the gamma probe, and 62 SLNs were found using the mobile gamma camera. For patients whom underwent a SLNB, the pain in axilla ranged from 1 to 3, while the severity reached 6 and 7 in the two patients who underwent axillary dissection.

Conclusion: The use of intraoperative mobile gamma camera in conjunction with the handheld gamma probe resulted in a higher SLN detection rate, made the SLNB more accurate with proper site localization, either axillary or extra axillary sites and with less complications.

Breast cancer is the most common cancer in women. In 2012, it comprised 25.2% of cancers diagnosed in women [1]. Axillary staging is one of the most important prognostic factors in all invasive breast cancer, and imperative for prognosis, regional treatment and local control according to NCCN guidelines [2]. Axillary lymph node dissection was considered the key step for evaluating axillary lymph node status, and it was routine for any patient with invasive breast cancer [3]. After wide implementation early detection protocols for breast cancer, the probability of nodal metastasis has markedly been decreased. Lymphatic mapping with sentinel lymph node biopsy (SLNB) has markedly replaced axillary lymph node dissection in those with clinically and radiologically negative axillae [4]. So, the use of SLNB, added the advantages of limiting the associated morbidities with axillary dissection, including, arm pain, sensory deficit of arm pit and medial side of the arm, limited range of motion at the shoulder level, axillary seroma and the most serious complication is the upper limb lymphedema [5]. The use of intraoperative mobile gamma camera that provide real-time intraoperative images of the SLNs, which can be used in combination with hand held gamma probe, is assumed to increase the accuracy of yielding the SLNs, with proper site localization, either axillary or extra axillary sites like, internal mammary or infra clavicular region [6].

Technetium-99m albumin nano colloid (99 mTc-nanocolloid) (500 μCi in a volume of 0.3-0.5 ml) was injected peri-areolar sub-dermal corresponding to site of the lesion 12-24 hours prior to operative time (Figure 1).

Intraoperatively, prior to sterilization, the mobile gamma camera was placed at distance of 15 cm to acquire an overview image of the breast and axilla and to assess radioactive uptake by the SLN(s) either axillary or internal mammary, or infraclavicular region location. (Figure 2). Then this detector was placed nearer to the field to precisely localize the detected SLN uptake using a cross laser pointer on the field that is matched to the hotspot on the camera screen and the location was marked on the patient’s skin. The gamma probe was used to confirm the proper site of the SLN after scanning the axilla, internal mammary region, and infraclavicular region (Figure 3).

During surgery, the arm of the mobile gamma camera was sterile draped allowing the placement and movement above the surgical field by the surgeon. Surgical incision was done guided by the skin marks (Figure 4). In some cases the breast tumor, radiotracer injection site, was located close to the SLN. The gamma probe was in these situations not able to locate the SLNs due to the radioactive noise from the highly radioactive injection site. The ‘masking’ functionality

of the mobile gamma camera was used to virtually shield the highly radioactive injection site and improve the SLN localization and visualization close to the injection site (Figure 5). After incision, the hand held gamma probe was used to detect and excise the lymph nodes with high tracer uptake (high count), which were considered the SLNs (Figure 6). After retrieval of a lymph node, the mobile gamma camera was used in conjunction with the gamma probe to confirm ex vivo that the lymph node contained radioactivity (Figure 7). Finally, the surgical field was checked again using the mobile gamma camera and hand held gamma probe to confirm that all radioactive nodes have been removed (Figure 8). The retrieved SLN(s) were sent for frozen section and paraffin section to assess the pathology result. Early postoperative follow up of the patients regarding; axillary and arm pain, sensory changes, seroma, was recorded. Pain assessment was done using a patient questionnaire according to the Numeric Rating Scale of pain (NRS-11), which is an 11-point scale for patient self-reporting of pain (Table 1). 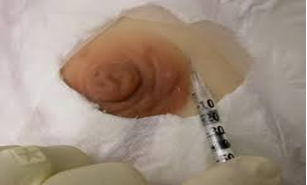 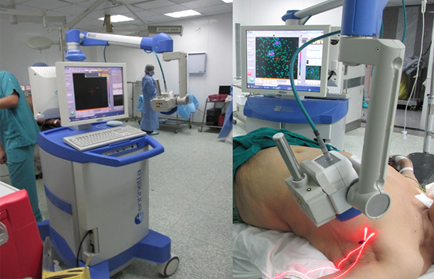 Figure 2: Rapid pre-operative scanning, to properly localize the site of the SlN. 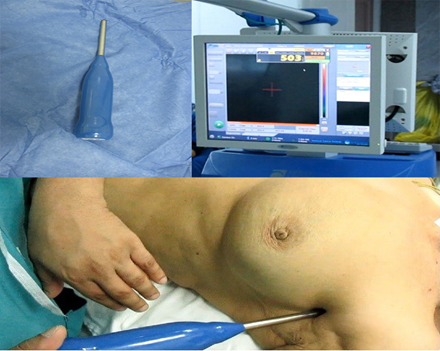 Figure 4: Intra-operative gamma camera and cross laser pointer image in the axilla with corresponding hot spot on the screen, for SLN localization. 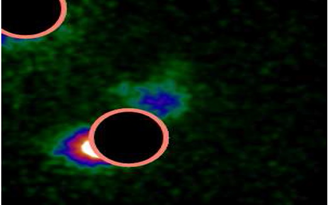 Figure 5: The ‘masking’ functionality of the mobile gamma camera was used to virtually shield the highly radioactive injection site.

Figure 6: Gamma probe inside surgical field detecting the SLN, with high count on the screen.

Figure 8: Intra-operative gamma camera scanning the surgical field after SLN excision without any radio activity on the screen.

The hand held gamma probe detected SLNs in 28 out of 30 patients (93.4%), while the intraoperative mobile gamma camera detected SLN(s) in 29 out of 30 patients (96.7%). The real time gamma camera images helped to retrieve 62 SLNs, while the gamma probe detected only 59 SLNs. 2 out of the three additional SLNs were found in a patient in whom the gamma probe couldn`t detect any SLNs. One of these 3 additional SLNs detected by the mobile gamma camera was found in a patient where already another SLN was found. In total, 61 axillary SLNs and one intramammary SLN was found (Table 2).

Frozen section results of detected SLN(s) were negative in 27 out of 29 patients. Micro metastases were found in one patient. In these 28 patients, only the SLNB was performed. In one patient the detected SLNs (3/3) were positive. Axillary lymph node clearance was done in both this patient with positive nodes and in the patient in whom no SLNs could be located (Table 3). The paraffin results of the detected SLN(s) showed similar results as the frozen sections except in one patient in whom a negative SLN appeared to harbor isolated tumor cells. There were no nodal metastases found in the two patient who underwent an axillary lymph node clearance.

Table 2: Site of detected SLN and type of axillary surgery. 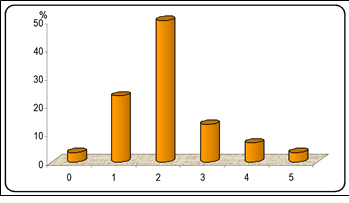 Figure 9: Frequency of detected SLNs in each patient.

Table 3: Frozen results of SLN and type of axillary surgery.

Table 4: Pain assessment according to (NRS-11).

The SLNB has become the standard of care for early stage breast cancer in clinically and radiologically negative axilla as the main detector of nodal metastases according to NCCN guidelines [2]. Nowadays, a mobile intraoperative gamma camera is developed that gives a rapid intraoperative real time image of the SLN that can replace the preoperative conventional gamma camera images [8].

In our study, the SLN detection and identification rate was 96.7%. The SLN(s) wasn`t localized in only one out of 30 patients with the use of the mobile gamma camera. With the hand held gamma probe alone, the detection rate was 93.4%. The gamma probe did not detect SLNs in two patients. The real time images helped to retrieve 62 SLNs in 29 patients, while the gamma probe detected only 59 SLNs. Although, we cannot assume independence of the two techniques in our study and the difference is minimal, however the better performance of the gamma camera over the gamma probe was demonstrated by Goni et al. who reported in 754 patients, who had undergone a SLNB in the period between January 2003 and December 2011, an improved SLN detection rate using the mobile gamma camera [9].

The frozen section results of all detected SLNs nearly the same as the paraffin results, except for one SLN that contained isolated tumor cells. However, this did not affect the patient management and no patient needed a second operation. This was in contrast with another study performed in 25 patients. In this study, the SLN(s) in 4 patients were metastatic by paraffin section while these were negative during the frozen pathological examination. These 4 patients underwent delayed axillary clearance in a second setting [8]. In a randomized multicenter study (ALMANAC trial), comparing SLNB vs axillary lymph node dissection (ALND) in operable breast cancer patients, was reported that only small number of patients who underwent SLNB needed surgical drain insertion (17%), while most of patient who underwent ALND needed surgical drain insertion (79%) [14].

In our study, the mobile gamma camera helped 28 out of 30 (~93.3%) patients to avoid surgical drain insertion in the axilla which is markedly annoying for the patients and carry the risk of infection. One of the patients developed post-operative seroma in the axilla. The wound size of SLNB ranged from 2-3 cm, while the wound size of axillary dissection was nearly 7cm. This was thanks to the precise localization of the SLN using the intraoperative gamma camera prior to incision and the complementary use of the hand held gamma probe. Thus, resulted in better cosmetic outcome. The same wound size was reported in a study on 163 breast cancer patients who underwent SLNB using radio guided detection with a gamma probe and preoperative lymphoscintigraphy [15].

The real time imaging of the SLNs using an intraoperative mobile gamma camera in combination with the hand held gamma probe results in a high SLN detection rate, made the SLNB more accurate with proper site localization, either axillary or extra axillary sites and less time consuming with less complications in breast cancer patients. Basically, the mobile gamma camera brings the nuclear medicine department to the operating room. This simplifies the surgical planning, because the surgical schedule does not need to depend on the preoperative lymphoscintigraphy planning, using a conventional gamma camera, at the Nuclear Medicine department.