Introduction: Patients with Gynaecological malignancies frequently visit the Emergency Department (ED). Knowledge of clinical presentation and their acute management will help in delivering a better care to these patients.

Materials and Methods: A Cross sectional study was conducted in the ED of All India Institute of Medical Sciences New Delhi, India from January 1, 2018 to December 31, 2018. The study cohort comprised of fifty patients with gynaecological cancer. Inpatient medical record was evaluated.

Conclusion: Pain was the commonest presentation and appropriately managing pain is a significant contributor to improving quality of life in these patients.

Cancer patients frequently visit emergency department (ED) in the late stages of disease. It acts as a critical portal to address acute illness issues. Approximately two-thirds of ED visits by patients with cancer end in hospital admission [1, 2]. ED care is focused on symptom control and management of the adverse effects of cancer treatment. Retrospective studies have described patient characteristics presenting to the ED and common complaints included pain, respiratory and gastrointestinal symptoms [1, 3-7]. A retrospective study done at an oncology centre in Ethiopia stated that most common malignancy in female was gynaecological (47%) followed by breast (26%). Carcinoma cervix was the most common among all gynaecological malignancies to present in ED (8). It is important to assess treatment outcome of cancer patients treated in ED. In this study we aim to analyse the presentation, diagnosis and treatment outcome of gynaecological cancer patients visiting the ED.

We conducted a cross sectional study in the Emergency Department of All India Institute of Medical Sciences New Delhi from January 1, 2018 to December 31, 2018. Study was conducted as per principles of Declaration of Helsinki. This hospital provides a tertiary level referral treatment and it is opened for 24 hours for emergency services. The study cohort comprised of all Gynaecological cancer patients which included cervical, ovarian, uterine and gestational trophoblastic malignancies. All participants provided written informed consent. In the ED, inpatient medical record of all patients was evaluated. Exclusion criteria included pregnancy and not willing to participate. Study variables included age, type of cancer, stage, presenting symptoms and diagnosis, emergency treatment received, further plan of care and outcome. Data was analyzed using SPSS software (version 18.0, SPSS, inc, Chicago, IL) and included descriptive statistics such as mean, percentage, proportion and frequency. Fifty patients were included in the analysis.

Median age of fifty patients was 45.5 years (range 18-68). Distribution of patients as per type of malignancy is shown in Figure 1. 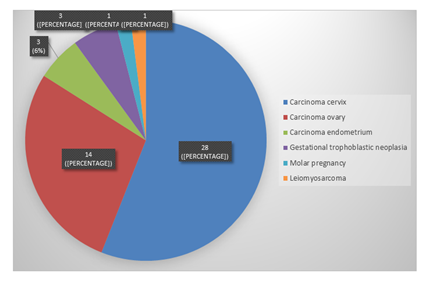 Figure 1: Distribution of fifty patients as per type of malignancy. 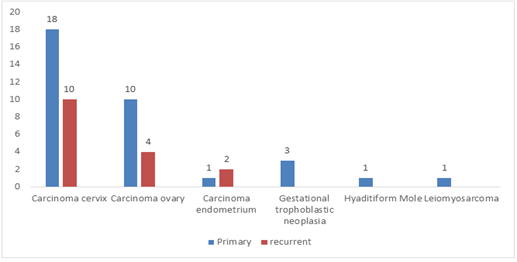 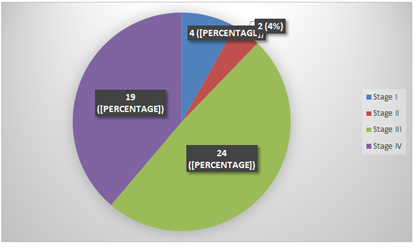 Presenting complaints of cases are depicted in Table 1.

Pain was the predominant complain followed by no urine output, bleeding per vaginum, shortness of breath, not passes flatus or stool, abdominal distension, nausea and vomiting, lower limb swelling, altered sensorium, dizziness and blood in urine. One case each had urinary leak from vagina, blood in sputum, jaundice, headache, fever, seizures and feeling of insects (maggots) crawling in the perineum.

Diagnosis was made by the emergency team which are enlisted in Table 2.

Table 2: Diagnosis of fifty patients with Gynaecological cancer in ED.

Table 3: Management of fifty patients of Gynaecological cancer in ED.

Median length of hospital stay was 48 hours (6-96 hours). Patients were discharged after planning a definitive therapy i.e. chemotherapy (30%), palliation of symptoms (42%), chemoradiation (10%), radiotherapy (12%) and surgical evacuation in the case of hyaditiform mole. Six patients underwent emergency laparotomy, with adnexal torsion, tumor rupture with hemoperitoneum and intestinal obstruction identified in two cases each. Of fifty patients two (4%) expired during the stay. Treatment outcome at the time of discharge is depicted in Figure 4. 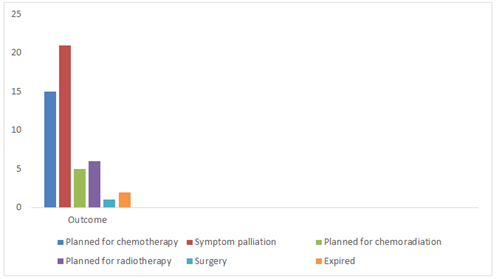 Figure 4: Treatment outcome of fifty patients at the time of discharge.

One case was a sixty five year old with stage IIIB carcinoma cervix who presented with altered sensorium and anuria. She had metabolic acidosis and obstructive uropathy with serum urea and creatinine level of 120 and 17 mg/dl respectively. She was administered cardiopulmonary resuscitation for fourty five minutes but could not be revived. Another mortality was that of a fifty six year old with stage IV B leiomyosarcoma uterus, post surgery and post chemotherapy and radiotherapy. She had shortness of breath with lung metastases and collapse. She was intubated and started on supportive care but she expired after 22 hours of stay.

Around 3% of all ED population of patients are with a diagnosis of cancer [9]. They present in an acute state with high symptom burden, and frequent need for admission. In the study by Rivera DR et al, 4.2% of all cases were cancer patients [3]. There are no prior reports exclusive to gynaecological cancer patients. An Australian report by Livingston PM et al showed Gynecologic cancer on fifth place (2.5% of all cases) whereas in another report by Sisay F et al., gynecological cancers comprised 11.7% of all oncological cases and was the third most common [10, 11].

Carcinoma cervix was the most frequent malignancy (56%) to present in ED and in an advanced stage. This is similar to another study by Wondimagegnehu T et al done in Ethiopa in which carcinoma cervix was the most common among all gynaecological malignancies to present in ED [8].One third of the cases were recurrent tumor in present study. Pain, anuria and bleeding per vaginum were the predominant symptoms and patients had obstructive uropathy, anaemia, electrolyte imbalance, metabolic acidosis, lung metastases, hematuria, deep vein thrombosis, sepsis, septic shock, vesicovaginal fistula, sciatic nerve involvement, bone metastases, displaced PCN and/or maggots in perineum. Carcinoma ovary cases presented with ascites, pleural effusion, lung collapse, tumor rupture and hemoperitoneum and/or adnexal torsion. Carcinoma endometrium cases had pneumonia or intestinal obstruction. Gestational trophoblastic neoplasia cases had anaemia, lung and/or brain metastases. Leiomyosarcoma patient had lung metastases and collapse.

The main complain among all patients was pain (28%). This is similar to other studies in oncology patients. 40% in the study by Swenson KK et al. 15.2% in the study by Gianmauray N et al, 22.9% in the study by Ahn S et al. [12-14]. In our study other common complaints were anuria (22%), bleeding per vaginum (22%), shortness of breath (14%), not passed flatus or stool (12%) and abdominal distension (10%). In a study by Christian E et al conducted in Germany, Austria and Switzerland; bleeding, nausea, vomiting and fever were common after pain [15].

Symptomatic treatment was started in all patients and definite management plan was made after consultation with oncology and palliation team. Two patients expired during the course of treatment and both were in terminal stages of their disease. There is a need for improved symptom control before and during the ED visit. Since Pain is the commonest presentation among patients with cancer and appropriately managing pain is a significant contributor to improving quality of life in these patients. Timely specialty consultation and adequate outpatient follow-up for further management is a prerequisite to decrease further ED visits in a decompensated state.

Across all malignancies, gynecological cancer contributes a major proportion to ED visits with carcinoma cervix being the commonest. Active intervention is required since the majority present in an acute state and pain being the commonest presenting symptom. Outcomes largely depend on acute management in ED and timely speciality consultation for further symptom palliation and management of primary cause.

No conflicts of interest to disclose.