Background: The plasma glutamine levels are known to decrease after major surgery, which is related to a negative clinical outcome. However, the influence of surgical stress on the decrease in the plasma glutamine concentration is unclear. The aim of this study was to evaluate the change in glutamine in relation to the types of gastrectomy and approaches as well as the amount of surgical stress evaluated by serum interleukin-6(IL-6) as an objective indicator.

Methods: This was a prospective observational study. The eligibility criteria were (1) gastric adenocarcinoma of the stomach confirmed by pathology and (2) patients scheduled to receive gastrectomy with lymphadenectomy for gastric cancer. Blood samples were taken at 7 AM on the day of surgery and at 12 h after surgery to measure the plasma glutamine and interleukin-6 (IL-6) levels.

Results: Between May 2011 and December 2011, 81 consecutive patients were enrolled in this study. The plasma glutamine level was significantly decreased in all patients, regardless of distal or total gastrectomy and laparoscopic or open surgery. No significant differences were observed in the IL-6 level between total and distal gastrectomy patients or between patients treated via a laparoscopic or open approach. Decreases in the plasma glutamine level were positively correlated with the logarithmically transformed-plasma IL-6 (logIL6) (r =0.471, p<0.001) overall.

Conclusions: Decreases in the glutamine concentration depended on the amount of surgical stress. When conducting a clinical trial to evaluate glutamine administration, personalized adjustment may be key to avoiding glutamine depletion in response to surgical stress.

Complete tumor removal is essential for the cure of gastric cancer. Gastrectomy with D2 lymphadenectomy is accepted as a standard procedure worldwide [1]. Although D2 surgery is a safe procedure, morbidity and mortality are unavoidable. Surgical complications impair patients’ quality of life and prolong the hospital stay. Recently, infectious complications have been reported to be associated with a poor prognosis [2,3]. Peri-operative glutamine administration may be an attractive approach to reducing the rate of infectious complications, as plasma glutamine levels are decreased following various critical states and because low plasma glutamine levels are associated with a negative clinical outcome [4]. A shortage of glutamine may lead to dysfunction of the immune system, which can cause infectious complications related to invasion [5]. Based on these previous findings, several randomized controlled trials were conducted to evaluate the efficacy of peri-operative glutamine administration in critically ill patients. However, findings were conflicting, with some trials noting positive results [6-8] and others [9-11] negative results. These contradictory results may be explained by the hypothesis that the reduction or demand of glutamine depends on the severity of the surgical stress. Two previous studies [12,13] demonstrated that plasma glutamine concentrations were reduced following major surgery but not after minor surgery, suggesting that severity of the surgical stress determines the reduction of the plasma glutamine concentration. However, the relationship between surgical stress and the reduction in the plasma glutamine remains unclear. Gastric cancer surgery may be a good candidate for such analyses, because surgical stress would be various depending on the approach or extent of gastrectomy. The present study therefore examined the change in the glutamine in relation to the type of gastrectomy and approach, as well as the amount of surgical stress evaluated by serum interleukin-6 (IL-6) as an objective indicator.

This was a prospective observational study. The eligibility criteria were (1) gastric adenocarcinoma of the stomach confirmed by pathology and (2) patients scheduled to receive gastrectomy with D1 or D2 lymphadenectomy for gastric cancer. The extent of lymph node dissection was determined by the JGCA guidelines [1]. Distal gastrectomy was selected when the tumors were located at the lower to middle third of the stomach, while total gastrectomy was chosen when the tumors were located at the upper third of the stomach. Laparoscopic distal gastrectomy was only performed when eligible patients with clinical stage I were enrolled in the phase III trial comparing open and laparoscopic surgery and had been randomly allocated to the laparoscopic approach. Laparoscopic total gastrectomy was only selected when eligible patients with clinical T1 disease were enrolled in the in-house phase II trial to evaluate feasibility. All other patients received open surgery. All clinical information was obtained prospectively.

The patients were admitted to the hospital by two days before surgery and allowed to eat until midnight the day before surgery. On the day of surgery, patients were allowed to drink Oral Rehydration Solution (OS-1®) until 3 h before surgery but did not receive any preoperative intravenous infusion. Blood samples were taken at 7 AM on the day of surgery and at 12 h after surgery to measure the IL-6 and glutamine levels. Glutamine concentrations were measured by high-performance liquid chromatography (HPLC)–electrospray ionization (ESI)–mass spectrometry (MS) by precolumn derivatization. These analytical methods have been described elsewhere [14]. Plasma IL-6 levels were measured using a chemiluminescent enzyme immunoassay (CLEIA).

The SPSS software program, version 19.0 (Statistical Package for Social Sciences, Chicago, IL, USA), was used for statistical calculations. To compare the IL-6 levels between surgical procedures, the Mann-Whitney U test was used. The differences in the plasma glutamine concentration before and 12 h after surgery were examined using a paired t-test. Differences were considered significant at p<0.05 in both analyses. The change in the plasma concentration of glutamine was calculated by subtracting the value at 12 h after surgery from the preoperative value. The values of IL-6 were converted to log scale (log10) referring previous studies [15-18]. This prospective observational study was approved by the research ethics committee of Kanagawa Cancer Center, Yokohama.

Between May and December 2011, 81 consecutive patients were prospectively enrolled in this study. No patient refused to enter the study during this period.

*: The American Society of Anesthesiologists score

***: Tumor depth and nodal involvement were based on the TNM 7th edition

*: The American Society of Anesthesiologists score 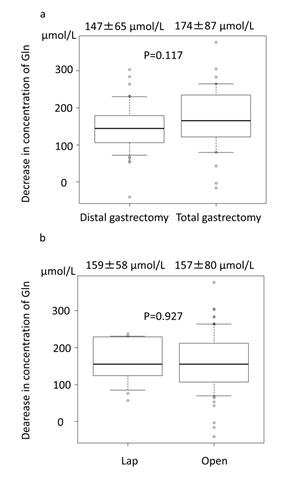 Figure 1: Decreases in the plasma glutamine levels before and at 12 h after surgery compared between procedure (a) and approach (b).

Table 3: The plasma concentrations of glutamine before and 12hours after surgery 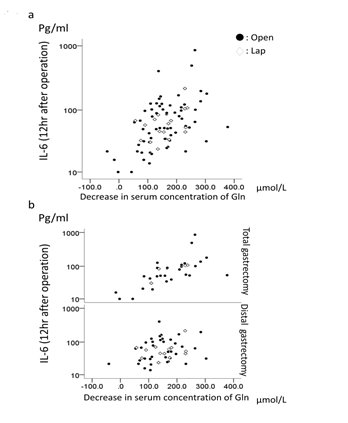 Figure 2: Logarithmically transformed-plasma IL-6 and decreases in the plasma glutamine levels (a) in all patients and (b) stratified by procedure.

Plasma glutamine was decreased depending on the amount of surgical stress.

This work being reported was partially funded by Ajinomoto Co., Ltd. All authors declare no commercial associations that might represent conflicts of interest with this article and have nothing to disclose.

This study was conducted in accordance with the Declaration of Helsinki. This study was approved by the Ethics Committee of Kanagawa Cancer Center Hospital, and written informed consent was obtained before surgery from all patients.

The authors declare that they have no competing interests in association with the present study.