Bacterial infection of the knee is a rare but serious complication after anterior cruciate ligament (ACL) reconstruction, with an incidence ranging from 0.1% to 2.25% according to the literature [1]. The causes are complex, such as contamination of surgical instruments and grafts, prolonged tourniquet, diabetes, anemia, infection in other parts of the body, history of smoking, history of previous surgery on the affected knee, etc [2]. The treatment of postoperative infection includes conservative treatment with antibiotics and continuous lavage after debridement. Conservative treatment usually refers to the application of broad-spectrum antibiotics with topical medications, knee braking and cold compresses after confirmation of infection, while the latter usually involves arthroscopic debridement of pus and inflammatory degenerative tissue in the knee cavity, extensive irrigation and drainage with large amounts of saline, and even removal of the graft to control the infection [3]. The most crucial thing in treating joint infection after ACL reconstruction is early detection and early diagnosis, especially in the early postoperative period, and timely diagnosis is more conducive to complete elimination of infection, protection of articular cartilage and preservation of grafts. In December 2021, a case of Paracoccus yeei (P. yeei) infection occurred in our department after early ACL reconstruction, which was treated with arthroscopic debridement and continuous lavage with satisfactory results.

The patient, a 26-year-old male, was admitted to the hospital for 6 days with a sprain from playing soccer that caused pain in the left knee joint with limitation of movement. The patient reported hearing a "pop" sound in the knee joint at the time of injury, followed by knee pain with significant swelling. On admission: left knee anterior drawer test (+), Lachman test (+), axial shift test (-). Preliminary diagnosis: ACL fracture of the left knee (Figure 1). After completing the preoperative examination, the ACL single bundle reconstruction was performed electively under arthroscopy using the autologous 4 strands of thin femoral tendon and semitendinosus tendon (Figure 2). The operation time was 115 min, and the intraoperative blood loss was 20 mL. Intraoperative and postoperative anti-infection treatment was routine on the first day, and White blood cell (WBC) 8.56×109/L and neutrophil ratio was 78.1%, C-reactive protein (CRP) was 12.13mg/L, erythrocyte sedimentation rate (ESR) was 3 mm/1h. On the second postoperative day, the patient started to have nocturnal hypothermia with a temperature of 38.2°C, which returned to normal in the early morning of the next day, and thereafter, the patient repeatedly had similar chills fever daily, with the highest temperature below 38.5°C. On the fifth postoperative day, the patient developed left knee pain after surgery 5 days, the patient developed left knee pain with hypothermia, and suprapatellar bursa puncture was performed, and about 50 mL of dark red bloody fluid was extracted. Bacterial culture results of P. yeei was obtained on postoperative day 8; at this time, WBC 7.41×109/L and neutrophil ratio was 71.3%, CRP was 154.5 mg/L, ESR was 48 mm/h, and Procalcitonin (PCT) was 0.084 ng/ml. Empirical administration ceftizoxime 2g q12h intravenously. The joint cavity was punctured again on the 10th postoperative day, and it was an earthy yellow turbid fluid (Figures 3,4). It was accompanied by elevated skin temperature and pressure pain in the injured area of the affected limb. A diagnosis of left knee infection was made, and a thorough arthroscopic debridement of the joint cavity, including the suprapatellar capsule, medial and lateral intercalated sulci, and posterior medial and lateral joint capsules, was performed on the same day. The ACL was preserved and a portion of the synovial membrane was clamped for pathological examination. After surgery, the daily saline flushing volume was greater than 3000 mL, and the knee joint was flexed and extended regularly. After the drug sensitivity results were obtained, the treatment was adjusted to piperacillin sodium tazobactam sodium 4.5g, q8h intravenous drip anti-infection and anti-swelling treatment, and the patient's temperature returned to normal from the 11th postoperative day, the symptoms of knee pain disappeared, WBC and neutrophil count, CRP and ESR were within the normal range, and PCT was 0.03ng/ml. After 10 days of flushing, the flushing tube was removed. The drainage tube was removed on 13th day. Intraoperative pathological findings showed massive acute inflammatory cell infiltration with necrosis and hemorrhage (Figure 5). 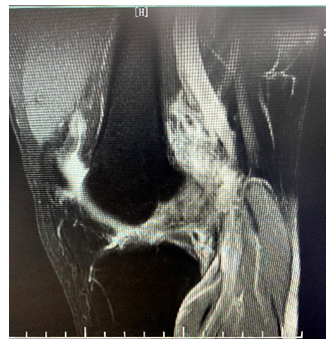 Figure 1: MRI T2: No clear image of the ACL was seen in the sagittal position, and a large amount of mixed signals were clustered in the intercondylar fossa, so ACL rupture was considered. 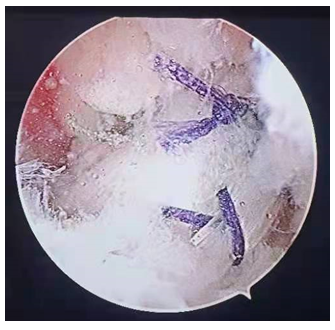 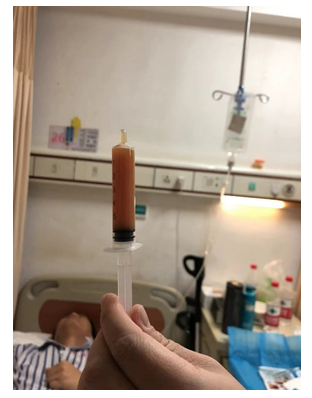 Figure 3: On the 10th postoperative day, the knee joint cavity was punctured with an earthy yellow turbid fluid of about 20 mL, which was considered an acute infection of the knee joint.

Figure 4: a: Second arthroscopic finding of diffuse synovial congestion and hyperplasia with fibrin exudation in the joint cavity; b: The reconstructed ACL tension was probable and the parenchymal portion was not damaged. 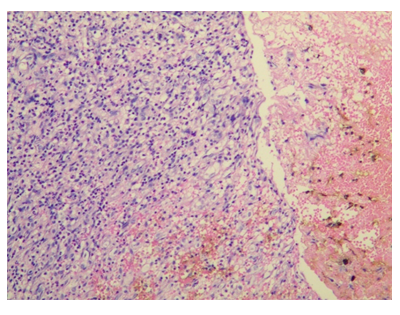 Figure 5: Pathological observation of synovial lesions in the articular cavity: massive acute inflammatory cell infiltration with necrosis and hemorrhage (HE×200).

ACL ruptures are most common in young and active people and may have long-term negative physical and psychological effects. In the last 20 years, arthroscopic ACL reconstruction has become the main treatment for ACL rupture [4]. However, complications such as infection, knee adhesions and ligament re-rupture can occur after microscopic ACL reconstruction, among which knee infection is a rare and serious complication after ACL reconstruction [5]. A multicenter-based study showed that the incidence of concurrent infection after arthroscopic autologous tendon reconstruction for ACL ranged from 0.14% to 1.70% [6], further leading to joint dysfunction, cartilage destruction, and ligament graft failure. It is generally accepted that joint infection after ACL reconstruction is associated with patient age, gender, intraoperative asepsis, prolonged operative time, prolonged tourniquet, graft selection, fixation technique, diabetes and preoperative steroid use [7]. Several publications support that allograft tendons have a higher incidence of joint infection than autologous tendons [6-8]. Judd et al. concluded that the tendon retrieval process of the hamstring tendon, as well as the fixation method, are associated with postoperative infection [9]. In our patient, an autogenous tendon was used and the operative time and tourniquet time was not too long. It has been reported that joint infections after ACL reconstruction are most often seen 2-79 days (mean 15 days) after surgery [10]. During this period, if a patient presents with persistent postoperative fever, or the temperature returns to normal and then rises again, accompanied by significant swelling and pressure pain in the knee joint, elevated local skin temperature, painful restriction of joint movement, and enlarged lymph nodes and pressure pain in the inguinal region of the affected limb, all suggest joint infection after ACL reconstruction. However, some patients with infection have atypical clinical manifestations, which poses a great challenge to the diagnosis and makes the disease continue and worsen. The patient in this case was the one who had a low fever after surgery but had mild inflammatory symptoms and felt good about himself, which caused a certain degree of delay. Therefore, for such patients, clinicians should be more alert to abnormal manifestations and signs, and actively perform relevant laboratory and bacteriological tests for correct early diagnosis. The common causative agents of joint infections after ACL reconstruction are Staphylococcus epidermidis, Staphylococcus aureus, and Staphylococcus hemolyticus, and other rare bacterial or fungal infections are also present [11]. In the present case, the patient was bacterially cultured for P. yeei, a non-motile, β-oxidase and peroxidase-positive Gram-negative aerobic coccus that is widely found in soil and nature as a conditional pathogen. The first case caused by P. yeei was isolated from a peritoneal dialysis fluid sample in 1988, which was initially identified as EO-2 (eubacterial oxidant-2) [11]. this EO-2 organism was characterized by Daneshvar et al. in 2003, who renamed it as P. yeei [11]. Sporadic cases of P. yeei infection involving different body systems have since emerged, such as three cases of peritonitis (Australia [12], Spain [13] and France [14]), as well as corneal [15] and myocardial [16] involvement, and cirrhosis-associated bacteremia [17] and cutaneous maculopathy-associated bacteremia [18]. The latter, published by Funke et al. in 2004, isolated P. yeei from cutaneous maculopapular lesions and peripheral blood. in the sparse literature on this organism as a clinical infectious agent, its low pathogenicity has been consistently found; patients do show signs of infection, but they do not have significant sepsis and respond rapidly to antibiotic therapy. Our data show a low minimum inhibitory concentrations (MIC) for the foramen ovale aminoglycosides, but also suggest that treatment with piperacillin/tazobactam or meropenem is also acceptable. Aminotrans, ceftazidime and ciprofloxacin are not the antibiotics of choice. wallet et al. published similar MICs for aminoglycosides and imipenem, but higher MICs for piperacillin/tazobactam and ciprofloxacin [14]. It is still difficult for us to determine the source of this microorganism and the route of entry into the body in this case. We believe that after a positive bacteriological result obtained by arthrocentesis, a second-stage debridement procedure should be performed immediately to maximize the chance of preserving the reconstructed ACL and avoiding other complications such as cartilage damage. The ability to preserve the grafted ACL in this patient was closely related to the early detection of the infection and early and aggressive management. Joint infection after ACL reconstruction is now the mainstream view using arthroscopic debridement. Intraoperatively, all necrotic and inflammatory material in the joint cavity should be thoroughly debridged, and the joint cavity should be continuously flushed with large amounts of saline. Intraoperative exploration of the reconstructed ACL may be retained if tension is available and the integrity is high. Joint infections have also been debrided 1-3 times (mean 1.3 times) in some scholars [19]. Routinely used arthroscopic procedures include extensive irrigation, cleaning of inactivated tissue, cleaning of synovial tissue and fibrin clots, along with removal of focal tissue for bacterial culture and pathological examination, and the cleanup must be comprehensive, involving the suprapatellar capsule, intercondylar fossa, internal and external intercondylar grooves, and posterior internal/posterior external joint capsule.Philipp et al. [20] studied 36 of 7096 patients with ACL reconstruction diagnosed with postoperative infection were studied and found that with preservation of the graft and timely arthroscopic debridement, the infection could all be controlled and the same better clinical outcome could be achieved in patients with post-ACL infection.

In conclusion, infection after ACL reconstruction can cause serious effects on patients, and in cases of post-ACL infection, early diagnosis should be made by combining the patient's clinical symptoms and laboratory tests with reasonable use of antibiotics, along with arthroscopic cleanup, placement of drainage and irrigation, and with reasonable functional rehabilitation exercises, good clinical results can often be achieved. p. yeei may have been associated with an unidentified infection in the past. Recently new diagnostic techniques have helped, such as MALDI-TOF mass spectrometry, PCR and DNA sequencing, allowing us to fully identify and characterize this organism. Increasing the knowledge of P. yeei, a rare bacterium, as a new pathogen can only further facilitate patient recovery.

Mao Nie was supported by the Kuanren Talents Program of the second affiliated hospital of Chongqing Medical University.