Carvedilol Associated with Ligation For The Prophylaxis of First Esophageal Variceal Bleeding: A Novel Approach of Long-Term Study

Carvedilol combined with banding ligation proved more effective than carvedilol alone in the prevention of first esophageal variceal bleeding and improvement of survival.

Hemorrhage from esophageal varices is a formidable complication of portal hypertension. Approximately one third of cirrhotic patients with esophageal varices will bleed. The mortality rate associated with first bleed is still around 20% despite the advancement of therapies in recent years [1,2]. Esophageal varices of medium-large size with red color signs carry a high risk of rupture ranging between 25% and 58% within 2 years [3-6]. Either beta-blockers or endoscopic variceal ligation (EVL) is recommended as a feasible tool for primary prophylaxis of high risk varices [7,8]. The combination of endoscopic therapy and pharmacotherapy has proven to be more effective than either therapy alone in the prevention of variceal rebleeding but not in the prophylaxis of first variceal bleeding [9-12]. This study was undertaken to evaluate the efficacy and safety of carvedilol plus EVL versus carvedilol alone in the prophylaxis of first episodes of esophageal variceal bleeding.

Patients presented with chronic liver disease and esophageal varices were selected for possible inclusion in the trial. The inclusion criteria were as follows: 1. the cause of portal hypertension was cirrhosis; 2. the degree of esophageal varices was at least F2 (moderate varices), associated with red color signs (red wale markings, cherry red spots); 3. no history of hemorrhage from esophageal varices or other upper gastrointestinal lesions; and 4. no current treatment with beta-blockers. Cirrhosis was based on results of liver biopsy, or clinical and biochemical examinations and image studies. The exclusion criteria were: 1. age greater than 75 years old or younger than 20 years old; 2. association with malignancy, uremia or other serious medical illness which may reduce the life expectancy; 3. presence of refractory ascites, hepatic encephalopathy or deep jaundice (serum bilirubin > 10 mg/dl); 4. history of shunt operation, transjugular intrahepatic portosystemic stent shunt (TIPS) or endoscopic therapy (EVL); 5. had contraindications to beta-blockers, such as asthma, heart failure, complete atrioventricular block, hypotension (systolic blood pressure < 90mmHg), pulse rates < 60/ min or pregnancy; 6. unable to cooperate; and 7. declined to participate. Patients eligible for the trial were randomized to receive banding ligation plus carvedilol (Combined group) or carvedilol alone (Carvedilol group). The method of randomization was based on opaque-sealed envelopes numbered according to a table of random numbers by a coordinator. Patients were informed about possible benefits and complications. Informed consent was obtained from all the patients. The study was conducted in accordance with the Declaration of Helsinki and approved by the Ethics Committee of investigators at all the 3 hospitals. The severity of liver disease of each patient was assessed at the time of presentation according to Pugh's modification of Child's classification and MELD scores [13]. The degree of variceal size was based on Beppu’s classification (3). Participants in both groups were advised to abstain from alcohol drinking. Antiviral drugs were administered to individuals with chronic hepatitis B or C when appropriate. Carvedilol was administered from the start of enrollment. The dose of carvedilol given was 6.25 mg (Roche, S.p.A, Segrate, Italy) twice daily. If participants complained of side effects, the dose of carvedilol given was tapered to 6.25 mg per day. Carvedilol was continued until death or the end of the study. After stabilization of the dosage, patients were asked to visit clinic every 3 months to get drugs as well as measurement of blood pressure and pulse rate. The compliance was evaluated by quantifying carvedilol tablets that were not consumed and blood pressure and pulse rates. Among the Combination group, the administration of carvedilol was similar to the Carvedilol group. EVL was initiated 2 weeks after use of carvedilol. Banding ligation was performed under premedication with 20 mg of buscopan intramuscularly. The Saeed Four-Shooter (Wilson-Cook Medical, Winston-Salem, NC, USA) or Speedband Superview Super 7 multiple band ligator (Boston Scientific Corp, Natick, Mass) attached to the video endoscope (Olympus XQ 230) was utilized. Ligation was initiated at the gastroesophageal junction and advanced proximally by experienced endoscopists. Each varix was ligated with one to two rubber bands. Further sessions of banding ligation were performed at intervals of 3 and 12 months. If varices were too small, EVL was not performed.

All patients suspected of upper gastrointestinal bleeding received emergency endoscopy within 12 hours of presentation. Supportive measures included blood transfusion, vasoconstrictor infusion and prophylactic antibiotics. Acute esophageal or gastric variceal bleeding was based on the Baveno criteria [14]. Emergency EVL was administered for esophageal variceal bleeding and glue injection was performed for gastric variceal bleeding [15,16]. Elective EVL with carvedilol or transjugular intrahepatic porto-systemic shunt (TIPS) for prevention of rebleeding was employed for patients of both groups if indicated [9]. Patients in both groups received follow-ups of abdominal sonogram, serum alpha-fetoprotein, and biochemistry at 3-month intervals. Adverse events were recorded. An adverse event was an event that required a diagnostic or therapeutic intervention. An adverse event was judged severe if it was considered to endanger the health or safety of the participant. Primary end points were first variceal bleeding and upper gastrointestinal bleeding. Secondary end points were adverse events, development of ascites or hepatic encephalopathy and death.

The data were expressed as mean± standard deviation (S.D.) Statistical analysis was based on an intention-to-treat principle. Continuous variables were compared according to Student's t-test, and categorical variables were compared using the Chi-square test and Fisher's exact test when appropriate. The Kaplan-Meier estimation was applied to examine the time to a first occurrence of bleeding and the time to death. The Log rank test was used to examine the variation of bleeding episodes and survival. The Cox’s regression analysis was used to detect possible prognostic variables other than treatment modality on the rebleeding rate and survival. All P values were two-tailed. A P value < 0.05 was considered significant. Analyses were performed using SPSS statistical package, version 26.0 (IBM Corp, Armonk, NY, USA). Assuming that 20% of the patients in the Carvedilol group may encounter first variceal bleed and which may be reduced to 5% in the Combination group, approximately 77 subjects would be required for each group with a two-tailed test to achieve a beta value of 0.2 and an error of 5% [17,18]. Owing to slow recruitment, the enrollment was terminated after a period of 4 years. All the enrolled subjects were advised to receive medications continuously. A coordinator in each center kept in contact with all the participants closely. We expected that an extension of the study period could compensate for inadequate sample size. 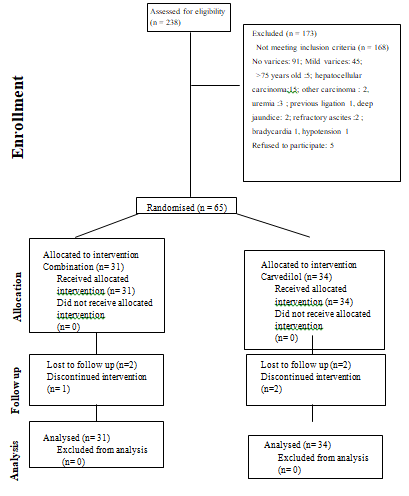 Table 1: Baseline data of both groups 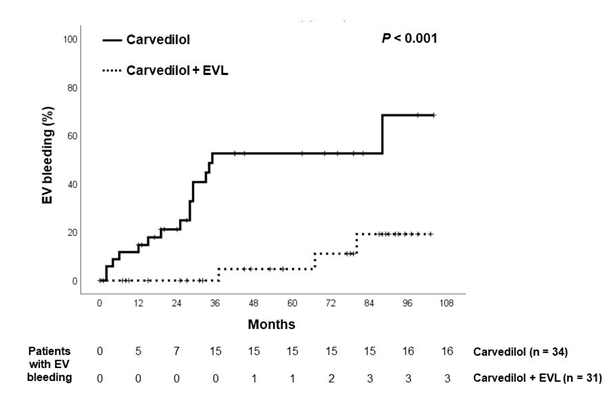 Figure 2: Kaplan-Meier estimates of probability of being free from first bleeding from esophageal varices in both groups. 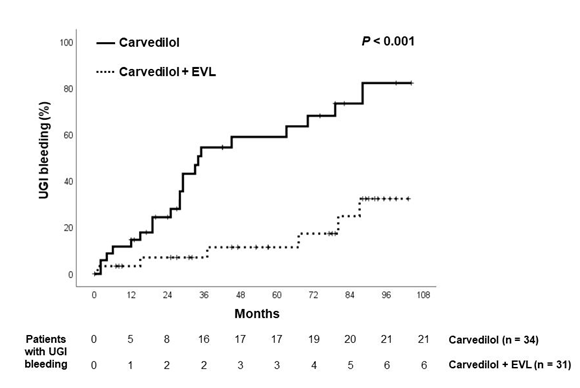 Figure 3: Kaplan-Meier estimates of probability of being free from upper gastrointestinal bleeding in both groups. 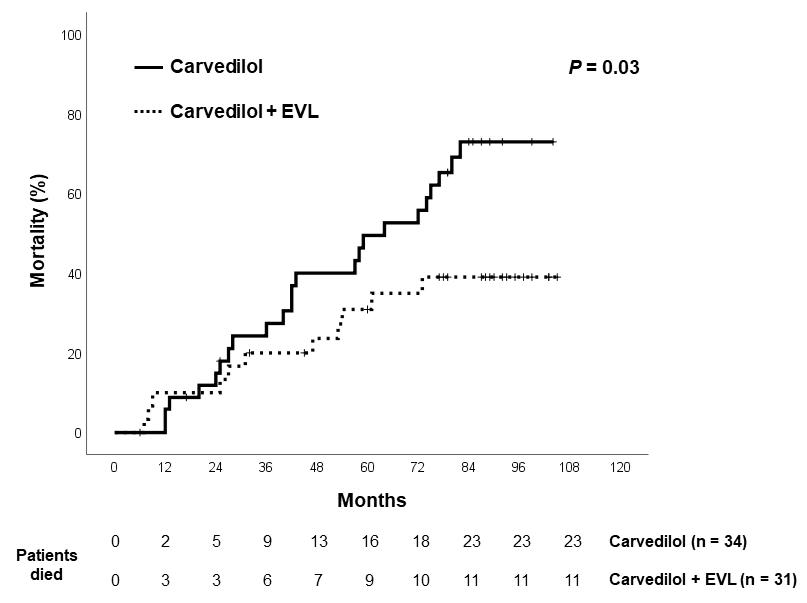 Figure 4: Actuarial of mortality in the 2 groups.

One episode of ulcer bleeding was encountered in the Combination group at 5 days after first session of EVL and rescued by use of vasoconstrictor and proton pump inhibitor. No serious adverse effects were encountered in Carvedilol group. The adverse events are shown in table 3. No significant differences existed between both groups.

It is well recognized that individuals with high risk varices should receive prophylactic measures to prevent first bleeding [2,7,8]. Beta blockers having the advantages of systemic effects and non- invasiveness, are generally recommended as the first choice [7,8,19]. Moreover, carvedilol, a ß blocker with anti-α1 activity, at daily dose of 6.25-12.5 mg was shown to elicit a greater decrease in hepatic venous pressure gradient (HVPG) than propranolol and combination with isosorbide mononitrate [20-23]. Some meta-analyses showed that EVL is superior to ß blockers in reducing variceal bleeding [24-26], while recent studies disclosed that carvedilol is superior to EVL in the prevention of first variceal bleed [26-28]. On the other hand, carvedilol could achieve significant HVPG reduction in only 54% of subjects [20-23]. Despite the use of ß blockers, at least 15% of individuals still bled from esophageal varices [24,25]. Combination therapy of ß blockers with EVL is hopefully via different mechanisms to achieve an enhanced effect in preventing variceal bleeding. Up to now, 8 trials, including 6 full articles [11-12,29-32] and 2 in abstract form [33,34], have assessed the efficacy of combination therapy. Interestingly, most of the published prospective studies showed negative results while the latest 2 large trials presented in abstract form and a network meta-analysis demonstrated enhanced effect by the combination therapy as compared with ß blockers or EVL alone [26,33,34]. Our trial firstly adopted carvedilol association with limited sessions of ligation as the combination therapy. The esophageal variceal bleeding rates were 0%, and 4.8% in 1-year and 5-year in the Combination group, respectively. By contrast, the corresponding figures were 14.7% and 52.6% in the Carvedilol group. These data suggested the long-term beneficial effects by association with EVL. The frequency of minor complications was similar between both treatment groups. Prior studies in cirrhotic patients using beta blockers showed that the incidences of first variceal bleeding were in the range of 10% and 43% [5,6,24,25]. The slightly higher incidence of variceal bleeding in our Carvedilol group could be ascribed to long-term observation and partly to poor compliance in the long-term study. Due to significant reduction of first variceal bleeding, long-term combination therapy achieved an enhanced survival as compared with individuals treated with carvedilol alone. This significant end point has been rarely achieved in previous trials [5,6,11,12,17,18]. The combination of EVL and beta blockers is currently not recommended by most guidelines, simply owing to inadequate evidence [8,14,19]. Conversely, a study from Germany revealed that up to 64% of clinicians using combination therapy to prevent first bleeding [31]. In this trial, we adopted a unique policy to combine EVL. The interval of EVL was lengthened and sessions of EVL were limited, with a purpose to reduce variceal size instead of complete variceal obliteration. All the previous trials pursued high variceal obliteration rates in a short period [5,6,11,12]. This policy requires bothersome regular endoscopic examinations and therapies to prevent variceal recurrence, potentially resulting in increased incidences of severe adverse events. Our methods could effectively reduce variceal size without hampering the effect. Small residual varices were left to be controlled by combination with carvedilol and treatment of underlying etiologies. Our variceal obliteration was only 39%, lower than previous figures up to 98% [25]. However, the variceal bleeding rate remained only 4.8% at 5-year by combination therapy. The appropriate interval of EVL has been an issue of controversy [34,35]. A trial from Japan with interval up to 2 months showed satisfactory results in primary prophylaxis of variceal bleeding [36]. There were no serious complications in either group in our trial except one episode of ulcer bleeding. The development of ascites and hepatic encephalopathy were similar between both groups. Our trial clearly showed that limited EVL sessions could be a good partner to carvedilol in the decrease of first esophageal variceal bleeding. The weakness of this trial was small sample size. The strength of our trial was multi-center, long term study using carvedilol together with a novelty design in the institution of EVL. This approach could obviate HVPG measurement and regular endoscopic surveillance. Most studies for primary prophylaxis of variceal bleeding usually observed for only 1 to 2 years [24-26]. Short study period and overtreatment with EVL were presumed to be responsible for the negative results of combination studies [30]. This trial with study period extending to 9 years, and a median of 55 months, demonstrated that variceal bleeding rate as well as mortality in cirrhotic patients with high risk varices could be effectively reduced by the combination of EVL and ß blockers. Choices between ß blockers and EVL for primary prophylaxis of variceal bleeding have been an issue of long-term controversy [26,38,39]. While experts prefer ß blockers, 64% of surveyed patients conversely prefer EVL over ß blockers [40]. Our trial suggested that combination therapy is a viable, practical approach. In conclusion, our data revealed that the addition of EVL to carvedilol could significantly enhance the effect in reducing the incidence of first variceal bleeding as well as mortality.