Citation: Liwan Dai, Tao Chen, Jinxing Wu. Chylothorax after Excision of The Right Broad Ligament Mass of The Uterus was Diagnosed Lymphangiomyomatosis A Case Report and Literature Review. Journal of Surgery and Research 5 (2022): 400-406.

Lymphangioleiomyomatosis (LAM) is a rare disease frequently (often) occurs in women of childbearing age. It is a multi-systemic disorder characterized by the proliferation, metastasis, and infiltration of smooth muscle cells in the lung and other tissues. We will report a case of a patient diagnosed with LAM who presented with chylothorax after hysterectomy of broad ligament.

Lymphangioleiomyomatosis (LAM) is a rare disease frequently occurs in women of childbearing age. It is a multi-systemic disorder characterized by the proliferation, metastasis, and infiltration of smooth muscle cells in the lung and other tissues. The exact etiology of this disease is not known, but due to the gender-specific nature of this disease, the female reproductive system is currently considered as the source of this cell. We will report a case of a patient diagnosed with LAM who presented with chylothorax after b road ligament resection. This phenomenon has not been reported in our literature study, which would provide new evidence for the mechanism of the disease.

A woman who was found to be occupying the right broad ligament developed dyspnea after surgical treatment. Chest CT found bilateral pleural effusion and multiple cystic lesions in both lungs. The pleural fluid Chyle test was positive, subsequent postoperative pathology confirmed LAM. The patient was treated by Sirolimus with Ideal therapeutic effect. However the presence of chylothorax after adnexal occupying resection has not been reported.

The pathogenesis of LAM is not completely clear, but the clinical manifestations of this patient seem to confirm the hypothesis that LAM originates from the female reproductive system. LAM should be considered in the differential diagnosis of female reproductive system tumors, we suggested to improve chest CT before surgery to be vigilant against the possibility of LAM if multiple cystic changes occur in pulmonary.

A 44-year-old woman was found a mass of the right broad ligament of the uterus by ultrasonography during physical examination. Two months ago she admitted to the gynecology and obstetrics department in a local hospital for treatment, the gynecologist advised her to do operation. One month ago her right broad ligament was removed, postoperative recovery was good. Two weeks ago she had a cough and persistent chest pain while she began to experience shortness of breath during routine activities after surgery. Ten days later she felt dyspnea, but without fever, hemoptysis. She had to re- admitted to the local hospital for treatment. Physical examination revealed body weight of 57.2 kg, pulse rate of 116 beats/min, respiratory rate of 26/min, blood pressure of 104/64mmHg, her respiratory sound were weak in both lower lungs. Ultrasound examination revealed a small amount of bilateral hydrothorax, but pleural puncture was not performed immediately. They thought she had bilateral pleural effusion because of lung infection by postoperative lying in bed after surgery, moxifloxacin was administered for six days without improvement. The patient’s dyspnea was deteriorating and she could not walk. She was admitted to our hospital. Before analyzing the patient's treatment, we did blood test, c-reactive protein, pleural fluid routine and spiral computed tomography (CT) (Figure 1). The blood tests showed white blood cells 9.73×109 /L, neutrophil 86%, C-reactive protein 61. The patient presented multiple cystic changes and bilateral pleural effusion in her chest CT scan. The preliminary diagnosis should consider with cystic lung disease, for example: CTD-ILD LAM (Lymphangioleiomyomatosis) PLCH (pulmonary Langerhans cell histiocytosis) LIP (lymfhoid interstitial pneumonia). Because of severe dyspnea, a lung biopsy could not be done on the patient, instead thoracocentesis became our preferred method. Surprisingly, the right pleural effusion was milky white, turbid, Rivalta test was positive. The total number of hydrothorax cells were 7000, mononuclear cells rate was 78%,multinucleated cells rate was 22%, total protein is 27g/L, albumin is 24g/L, lactate dehydrogenase is 144u/L, adenylic deaminase is 0.9u/L; and the left pleural effusion is also milky white, turbidity. Rivalta test is positive, total cellular score are 5000,mononuclear cells rate was 84%, multinucleated cells rate was 16%, total protein 26g/L, albumin 21g/L, lactate dehydrogenase 108u/L, and adenylic deaminase was 2.1u/L. The chyle test of bilateral pleural effusion were positive. At this moment, we highly suspected that this patient had LAM and acquired a post-operative pulmonary infection. We interrogated the patient again, she revealed she had an intermittent cough for 3 years. Because the symptoms were mild, she never got admitted to hospital for diagnosis or treatment. One year ago, the patient appeared anhelation after the activity and occurred irregular intermittent hemoptysis. Her chest X-ray showed increased lung texture. Unfortunately, chest CT and pulmonary function test were not performed on the patient. Based on the patient's history, the patient most probable diagnosis was lymphangiomyomatosis. At the same time, the patient's pathological report after surgery indicated: Lymphangiomyoma with mullerian epithelial hyperplasia and calcification (Figure 2). Taking into consideration the lungs cystic changes, chylothorax, and pathological report, we diagnosed that she had lymphangiomyomatosis with multiple system (damage). Sirolimus was used for her treatment. After 4 months of treatment with sirolimus, the patient's chylothorax and dyspnea got relieved, we were still looking at the patient dynamically. 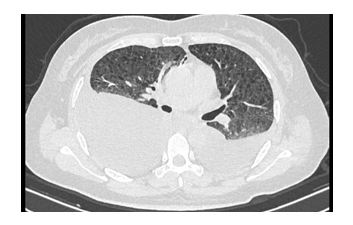 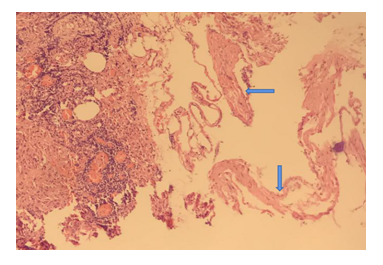 Lymphangiomyomatosis (LAM) is a serious and rare disease that mainly affects women of childbearing age. The etiology and pathophysiology of the disease remains unclear. However, the overwhelmingly large proportion of female victims indicates an origin from the female reproductive system.The disease mainly affects smooth muscle cells (SMCs) [1,4] involving multiple organs, but the lungs are most often involved. Pulmonary cystic changes are characteristic, and pneumothorax (57%) and hemoptysis (32%) are the most common manifestations in the respiratory system. Furthermore, abdominal angiolipomas (32%), lymphangioleiomyoma (29%), pleural effusions (12%), and less commonly, chylothorax, chylous ascites, chyluria, chyloptysis, and abdominal hemorrhage caused by renal angiolipomas could appear in LAM [2].

Takuo Hayashi’s studies, based on An analysis of pathological features in 10 LAM patients by T. Hayashi et al. showed that the pathological features of LAM were present in the uterus in 9 out of the 10 patients, in the adnexa in 5 out of 8 patients, in the broad ligaments in 2 patients, and in the ovaries and the broad ligaments in 3 patients[5]. The study, despite its small sample size, proved the presence of LAM in female reproductive organs. It is of note that none of these patients had features of LAM in their lungs. The results from this study to some extent confirmed the hypothesis that LAM cells originated from the uterus [5].

If the female reproductive system is the source of LAM-specific selection, how did chylothorax develop after removel of the mass? Based on the conclusions of the above literature and review of history of the patient, we developed the following hypothesis. Extrapulmonary LAM mainly occurs in the mediastinum, the upper retroperitoneal areas close to the abdominal aorta, and the pelvic cavity [12]. LAM cell proliferation in lymph nodes through the direction of lymph reflux occurs most frequently in the retroperitoneum and pelvic cavity along the axial lymphatics, indicating that LAM cells may originate in this area or originate distal to this area in a direction toward the lymphatic stream [3].

How do we treat this patient further? Researchers discovered that LAM tumor cells contain a very specific genetic defect: an inactivating mutation in tumor suppressor gene tuberous sclerosis (TSC)1 or TSC2 [7,8]. These proteins normally complex with Tre2-Bub2-Cdc16 1 domain family, member 7 (TBC1D7) [9] to inhibit Ras homolog-enriched in brain, an activator of mammalian target of rapamycin complex 1 (mTORC1) [10,11]. As a result, sirolimus is effective in the treatment of LAM. After oral administration of sirolimus, dyspnea was relieved and chylopleural fluid was controlled but the resolution was not complete, and the patient needed repeated drainage of pleural fluid in the outpatient clinic. Her activity was improved after treatment. The patient later underwent thoracic duct ligation because she was troubled by repeated thoracentesis, and the formation of chylothorax was relieved after the procedure. So far, the patient still visits regularly for follow-up observation and is still on oral sirolimus for maintenance treatment. No drug-related adverse effects have occurred so far. Pulmonary function tests showed that FEV1 and FVC have been stable.

Review of the diagnosis and treatment of this patient has led to new understanding of space occupying lesions of the female reproductive system. It is rare to find LAM in the female reproductive system. After surgical removal of the mass, there is a risk of chylothorax. A more comprehensive evaluation is required before surgery. Chest CT should be used as a routine preoperative examination to assess the lungs. The presence of multiple thin-walled cysts and pleural effusions on chest CT should raise an alert to the possibility of LAM.

Written informed consent was obtained from the patient for publication of this case report and any accompanying imagesConflict of Interest Statement.

All of the authors read and approved the final version. If the manuscript passes review, all the authors agree to publish it.

The images we used are available for download throughout the article

All author declare that they have no competing interests.

Jinxing,Wu conceived the whole article,Liwan,Dai are the managers of the patient, collect case data together and write. Tao Chen co-managed the patients and provided some part of data.

We would like to appreciate Zhu Xuyou for his help during the discussion.