This is a retrospective analysis of a total of 42 patients of symptomatic remnants of vitellointestinal duct from period of September 2011 to August 2019.

Total of (n= 42) cases male to female ratio was 2:1. Average age of presentation was 2 months. Commonest presentation was small reddish mass with continuous waiting. (n=30). Umbilical polypoidal mass with discharge in 4 cases. Two patients presented with prolapsed of ileum in which thread ligation was done in peripheral hospital as it was misdiagnosed as umbilical granuloma.

This review is based on the published academic articles as well as our clinical experience and observational study analysis determined.

Vitellointestinal duct (VID) or omphalomesenteric duct anomalies are secondary to the persistence of the embryonic vitelline duct, which normally obliterates by weeks 5-9 of intrauterine life. Presented as umbilical sinus with discharge and four had patent vitellointestinal duct having history of passage stool through umbilicus.

Persistent VID may have varied presentations in infancy. High output umbilical fistula and excessive bowel prolapse demand urgent surgical intervention to avoid morbidity and mortality. - Umbilical granuloma and remnants of vitellointestinal dusts must be differentiated before any treatment of umbilical granuloma like thread ligation otherwise disastrous complication can occur. Apart of clinical examination ultrasound examination is helpful in differentiation.

Discharge from umbilicus is a very common presentation in pediatric age group and umbilical granuloma being the most common differential diagnosis in such patients. It is commonly managed by simple thread ligation of the granuloma or by chemical cauterization. Patent vitellointestinal duct should be ruled out in such patients to avoid catastrophy. The authors report the case of a 10- week-old male infant referred by his General Practitioner for silver nitrate cauterisation, with a diagnosis of suspected umbilical granuloma (UG). The child underwent subsequent exploratory laparotomy and bowel anastomosis was performed after excision of the patent vitello intestinal duct. The treatment of a patent VID is wedge or segmental resection. In wedge resection; there are chances that ectopic mucosa may be left in native ileum, hence resection and anastomosis was our preferred approach. The prognosis is generally good except omphalitis associated with VID anomalies; especially if associated with complications has been reported to have significant mortality [1-3]. In this study, 2 patients with umbilical sepsis and dyselectrolytemia died; morbidity and mortality could have avoided by early diagnosis and treatment.

An umbilical granuloma is a moist, red lump of tissue that can form on a baby's navel (belly button). It can be seen in the first few weeks of life, after the umbilical cord has dried and fallen off. It's usually a minor problem that looks worse than it is. An umbilical granuloma does not cause pain. While uncommon, some pyogenic granulomas may shrink and resolve on their own after time, particularly if the cause was related to pregnancy or a certain medication. In these cases, no removal procedure is necessary. However, most pyogenic granulomas will need some sort of procedure to treat and remove them.

Patent vitellointestinal duct (VID) is a rare condition in adults. This anomaly may remain asymptomatic throughout life or may present with umbilical sinus, abscess, fistula, intussusception, and various other intra-abdominal complications. The omphalomesenteric (vitelline) duct is a normal component of fetal development. It connects the fetal intestine to the yolk sac. When these structures persist in a newborn, they are called omphalomesenteric duct remnants. In the human embryo, the vitelline duct, also known as the vitellointestinal duct, the yolk stalk, the omphalo-enteric duct, or the omphalomesenteric duct, is a long narrow tube that joins the yolk sac to the mid gut lumen of the developing fetus.

The aim of this study was to review the management of pediatric cases of vitelline duct (VD) detected surgically or incidentally during the neonatal period and the outcomes. the main objectives is that differentiation between umbilical granuloma and patent vitello-intestinal ducts in infants and its associated complications - 8 yrs using novel approach.

Vitellointestinal duct (VID) or omphalomesenteric duct anomalies are secondary to the persistence of the embryonic vitelline duct, which normally obliterates by 5-9 weeks of intrauterine life. Persistence of embryonic VID leads to many anomalies that may require surgical interventions like fistula, sinus tract, cyst, mucosal remnants etc. Patent omphalomesenteric duct is an enteroumbilical fistula, manifesting with the passage of meconium or fecal matter through the umbilicus. Most important complication is prolapsed of ileum through umbilicus. Persistent discharge 3-5 days after the separation of the umbilical cord suggests the presence of granuloma, polyp, omphalitis, and omphalomesenteric duct (OMD) and urachal canal remnants. Sometimes a small mass of granulation tissue develops after separation of cord at base. This granulation tissue is called as umbilical granuloma [4,5]. These are true granulation tissue made up of fibroblast and abundant capillaries. It may be pedunculated and size varies from 1 mm to 1cm. sometimes it gets confused with umbilical polyp [2]. My two patients were earlier treated outside with thread ligation and that got necrosed. Later on ileum prolapsed through the necrosed part. Exploratory laparotomy was done on emergency basis and resection and anastomosis was done. Before going for thread ligation or cauterization Ultasonography must be done to locate any communication to gut. Proper history taking of any discharge, clinical examination of lesion is utmost important part of management of umbilical lesion [3]. Umbilical granuloma usually red in colour and umbilical polyps having mucosal lining with history of slight watery discharge. Chemical cauterization, thread ligation or bipolar cauterization is sufficient treatment for umbilical granuloma. Whereas in other lesions like umbilical polyp, cyst or patent vitellointestinal ducts exploratory laparotomy is needed. There are two types of retrospective study: a case- control study and a retrospective cohort study [6-9]. A retrospective study design allows the investigator to formulate hypotheses about possible associations between an outcome and an exposure and to further investigate the potential relationships. However, a causal statement. 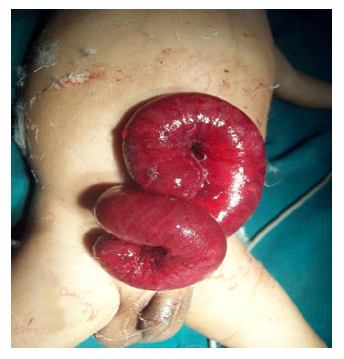 Figure 1: Double horn or Y shaped segment of ileum, inside out with a lumen evident on each horn. 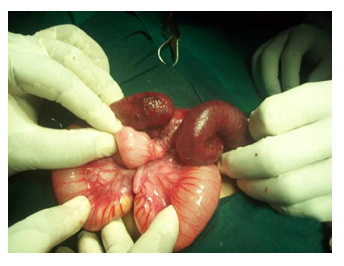 Figure 2: Intussusception of the small bowel through the opening in ileal wall 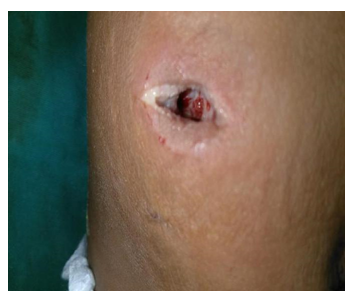 We would like to thank the team of the LD clinic and SPSS simulation tool software.