Background
Conventional Thyroid Lobectomy leaves an unpleasant neck scar. Endoscopic thyroidectomy was first applied by Huschner in 1997. Amongst the best endoscopic techniques is the one we use, referred to as the endoscopic axillary-breast-shoulder approach (ABSA) innovated by Dr. Trans Ngoc Luong.

Objective
To examine the safety, feasibility and cosmetic outcome of endoscopic thyroid lobectomy.

Results
Successful endoscopic lobectomy was performed in almost all cases with conversion to open in two cases. The median operative time was 100 minutes. No preoperative injury was inflicted. One case sustained minor skin burns which healed without any residual scar. One patient developed full thickness skin burn and one patient had seroma. All patients were discharged on first postoperative day. Excellent cosmetic outcome achieved in all patients leading to their optimum satisfaction.

Thyroid nodules are conventionally operated by open technique pioneered by Kocher (Nobel prize in 1909). Due to recent advances in minimal invasive surgery (MIS), scar less neck surgery has been contemplated in different parts of world quite successfully. Learning curve of endoscopic thyroid surgeons has markedly improved during the recent years. Ever since Gagner et al reported an endoscopic approach to parathyroid gland in 1996, several endoscopic techniques for thyroid surgery have been described with the primary aim of obtaining better cosmetic results [1]. New endoscopic approaches are being practiced quite safely and all procedures are concerned about cosmetic results [2-4]. Although the indications for endoscopic thyroidectomy have been expanded extensively, but these procedures are not accepted readily for large benign thyroid lesions (size more than 3-4 cm) and for thyroid cancer [5-8].

In the last decade, endoscopic thyroidectomy has expanded and is being considered as an alternative to conventional thyroidectomy simply because it reduces tissue trauma, postoperative pain, and provides excellent cosmetic results [3]. Endoscopic approach to the thyroid and parathyroid gland may be direct or indirect. The direct approach places the access ports within the cervical region and is considered the least invasive [9-12]. The indirect approach provides access to the neck through a remote site from the target area [13-18]. The lateral neck [19] axillary [20] anterior chest [21] and breast [22] approaches have all been described. The difference between these techniques is only by the site of placement of the access cannula. Postoperatively, there is no visible neck scar with excellent cosmetic results and the return to work is early.

It is worthwhile mentioning the name of Dr Trans Ngoc Luong from Ha Noi, Vietnam, who has innovated a new endoscopic axillary-breast-shoulder approach in 2004. He has operated about 3500 cases at National Endocrine Hospital, Ha Noi, using above mentioned technique [23]. We adopted Dr Luong’s endoscopic axillary-breast-shoulder technique for thyroid surgery at Lahore General Hospital, Lahore. We would like to share our experience of this new technique.

This prospective study was conducted in 20 patients at Lahore General Hospital (LGH) from 9th September 2016 to 31st December 2019. The patients included in our study were 18-45 years of age, having unilateral solitary thyroid nodule less than 5 cm, with benign FNAC. The patients more than 45 years, recurrent goiter, nodules more than 5 cm, malignant FNAC and co-morbid (HTN, IHD, COPD) were excluded from our study.

All of our patients were operated under general anesthesia. We adopted Dr Luong’s Lateral approach for endoscopic thyroid lobectomy. One 10 mm trocar was inserted through axilla, one 5mm trocar inserted through areola and another 5mm trocar inserted close to shoulder tip (2.5cm below the lateral end of clavicle) (Figure 2). CO2 insufflation maintaining pressure of 8-10 mm Hg was used during the procedure. Subcutaneous space over pectoralis major was created with the use of monopolar diathermy to reach suprasternal notch. From here onward space was created between strap muscles and platysma to reach thyroid cartilage. Sternocleidomastoid muscle dissected away from strap muscles up to superior belly of omohyoid. Sternothyroid muscle split along the fibers laterally and thyroid lobe was manipulated out with blunt dissection. With the help of harmonic scalpel inferior and superior poles dissected and lobectomy done making sure to preserve recurrent laryngeal nerve, external branch of superior laryngeal nerve, parathyroid glands and other adjacent structures (Figure 3). Haemostasias secured and specimen retrieved in Endo bag through the axillary port site making sure to avoid any spillage (Figures 4,5). Suction drain no. 14 placed in the neck through the axillary port site after thorough irrigation of area with saline. Port sites stitched and dressed.

The parameters monitored in our operated patients were operative time, complications, hospital stay, cosmetic outcome and patient’s satisfaction. Cosmetic outcome was graded as poor, average or excellent. Patients were inquired whether they were fully satisfied, just satisfied or not satisfied at all. Results were analyzed and rational conclusion drawn.

In our short series of 20 cases, all were females with age range from 18 to 45 years and median age 26 years. All were free from any chronic co-morbidity like HTN, DM, IHD etc. 13 patients underwent right thyroid lobectomy and in 7 cases left sided lobectomy was performed. Nodule size was less than 5 cm with mean size 3.4 cm. FNAC for all nodules was benign. All patients were successfully operated with conversion of two patients to open surgery. The operative time for initial two cases was about 160 minutes but in the last two cases it reduced to less than 90 minutes with the median operative time of about 110 minutes (Table 1). No patient had iatrogenic injury to recurrent laryngeal nerve, external branch of superior laryngeal nerve, parathyroid gland, trachea or esophagus. Per operative bleeding was encountered in one patient from dilated veins on the surface of thyroid and we had to covert to open surgery. One of our cases suffered minor skin burn that healed within two weeks of follow up without any residual scar (Table 2). Average postoperative drainage was 20 ml. Drain was removed on 1st post operative day and all patients discharged. One patient developed full thickness burn and it was excised with primary closure using 4/0 prolene. One patient developed post operative seroma during follow up which recovered spontaneously. No patient developed hoarseness, hematoma, hypocalcemia or port site infection during follow up. All patients were fully satisfied and cosmetic outcome was excellent (Table 3).

Keeping in view the deep cosmetic concern of large majority of thyroid patients especially females, we conducted this study in our hospital to assess the feasibility and safety of endoscopic approach. We operated all of our patients with Dr Tran Ngoc Luong’s endoscopic technique using axillary-breast-shoulder approach. We found this approach to be very practical, feasible and safe. Our study has been quite encouraging as the results of our study are very much comparable with the international literature. Our learning curve of endoscopic procedure improved enormously during the study. Our operative time was quite prolonged in initial two cases (approx. 160 minutes each) due to poor logistics and untrained staff. Now operative time is reduced to less than 90minutes due to better logistics and improved learning curve of the surgeons and staff. No injury was inflicted to the adjacent structures (recurrent laryngeal nerve, external branch of superior laryngeal nerve, parathyroid glands, esophagus, trachea and any major vessels) during surgery except minor skin burns in one patient. Avoidance of injury to these structures has been possible because of improved endoscopic visualization of above-mentioned structures. This patient had minor burn due to strong camera light in early cases of our study. We have been able to avoid this complication in the later part of our study by lowering the intensity of camera light, using 30-degree scope to avoid continuous exposure of skin by changing the direction of scope and continuously putting saline socked gauze over the skin. This burn healed without any residual scar within two weeks’ time. One patient developed full thickness diathermy burn that was excised and subcuticular stitches were applied using 4/0 prolene. Only one patient developed postoperative seroma which was managed conservatively on OPD basis. No patient developed hematoma in our study possibly because of immaculate hemostasis during dissection. We used three doses of I.V second generation cephalosporin, prophylactically. By using the lateral approach, Palazzo et al. [24] have removed nodules of mean size 22 mm (range 2-47 mm), while our mean nodule size is 34 mm. The conversion rate in our early study has been 13% that is comparable to 0-13% mentioned in international literature where conversion was mostly due to malignant histological result, bleeding, difficult dissection and large nodule size [25]. Miccoliet al. [26] have reported recurrent nerve palsy in eight cases (2.1%) and eleven patients exhibited hypoparathyroidism, of which only two had permanent hypocalcemia (1.8%). In our study, all cases, the recurrent laryngeal nerve was identified and preserved intact. The superior and inferior parathyroid were identified and preserved. Cosmetic outcome was excellent in all of our patients and all were fully satisfied regarding the surgery (Figure 1). We as surgeons found this procedure safe and feasible but has a learning curve. 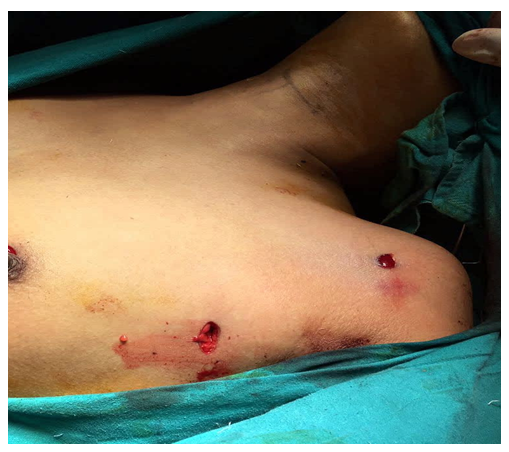 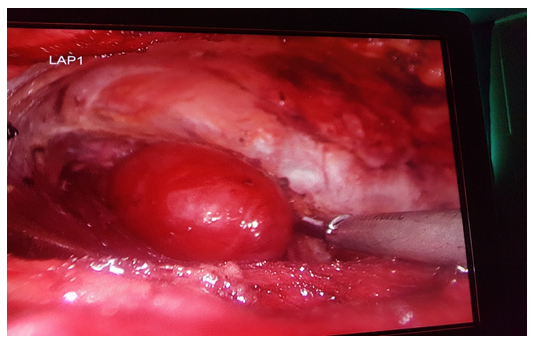 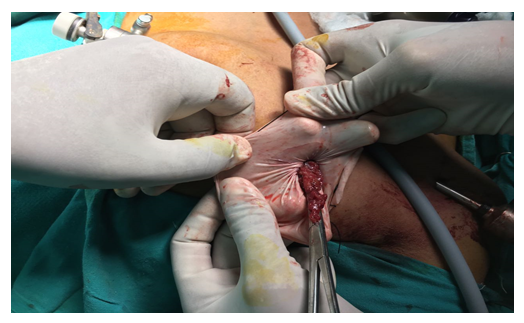 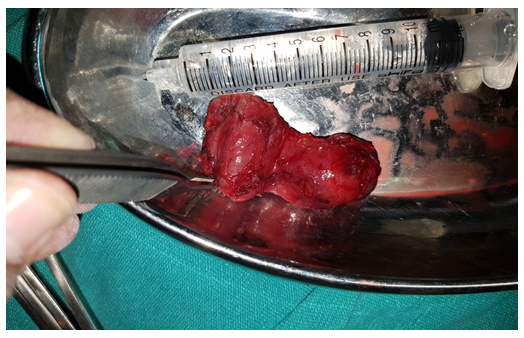 Our early experience at Lahore General Hospital, Lahore proved that endoscopic thyroid lobectomy is a reasonably safe and feasible procedure with satisfactory cosmetic outcome. This technique can be practiced safely in carefully selected patients.