The Constitution of the World Health Organization (1946) which entered into force on April 7, 1948 declared that the enjoyment of the highest attainable standard of health is one of the fundamental rights of every human being without distinction of race, religion and political belief, economic or social condition. As labor constitutes a great proportion of adult life, occupational safety and health is evidently one of the key elements in the realization of this aspiration.

Over the years, workplace safety and health has become one of the chief concerns in the public health sphere. The global burden of occupational-related fatalities is estimated at 2.3 million per annum skewed towards the lower-income countries of the world [1] and ergonomic hazards contribute significantly to this burden [2].

In Kenya the situation is even more glaring. According to ILO (2013) most workers in Kenya are left exposed to occupational hazards without intervention. Though the constitution (2010) grants the right of every person to the highest attainable standard of health and reasonable working conditions; and the Occupational Safety and Health Act (2007) stipulates the safety, health and welfare of all workers, these aspirations are yet to be realized for the laboring population. The Directorate of Occupational Safety and Health Service (DOSHS) which manages occupational safety and health in the country has only 71 professional OSH officers and is represented in only 29 out of the 47 counties [3].

Supermarkets are among the most rapidly growing groceries in developing countries with Kenya being particularly noteworthy [4]. According to Anton and Weeks (2016) [5] supermarket workers are among the occupational groups with especially high rates of work-related musculoskeletal disorders. Nearly 80% of this cadre of workers report musculoskeletal injuries or illness of some sort. As musculoskeletal disorders are among the leading occupational health concerns around the world [6], and coupled with the rising burden of noncommunicable diseases around the world, WMSDs should be accorded more attention than hitherto granted [7,8].

The major risk factors for WMSDs are ergonomic (biomechanical) including awkward postures and repetitive tasks that elicit sudden or continuous strain on workers’ musculoskeletal system [9], though psychosocial factors have also been implicated in their etiology [10]. It has thus been reported that physically arduous occupations have markedly high prevalence of MSDs [11]. The economic and social costs of these disorders are enormous [12] though it is contended that the true burden remains unknown and available reports are underestimations [13].

Despite this evidence, studies focusing on ergonomic hazards among supermarket attendants are rare not only in Kenya but seemingly the world over. A literature such on PubMed® returned few related but not similar studies [14,15].

The study was conducted at a leading urban center in western Kenya. The urban center serves a population in excess of 400, 000 according to the 2009 census, majority of whom are employed in the informal sector and is an economic hub in the region. The poverty index of the county to which the metropolis belongs is high and has other negative health outcomes. A cross-sectional analytical design was used to document the situation at the time of the study. For ethical reasons, the study area, population and participants were anonymized.

The study was conducted in 12 supermarkets located in the urban center. The supermarkets were selected by census method with the aim of including all leading supermarkets in the urban center. The study population (based on physical counts) were 38 consisting of 15 luggage attendants and 23 security guards distributed across all the supermarkets. A convenience sample of 24 participants, consisting of 12 luggage attendants and 12 security guards (one participant per cadre per supermarket), were chosen to represent the population. Where there were present more than one potential participant at the time of data collection, a simple lottery was used to select the subject to be observed.

Participants were covertly observed for 10-20 minutes per supermarket and the data was electronically captured on Microsoft Word using an android smartphone. Data was collected during business hours extending between 9am-6pm in the months of December 2018 and January 2019.

Data from the android phone was uploaded into a personal computer, cleaned, printed, coded and entered into SPSS version 23. Supermarkets were anonymized using alphabetical letters, time was coded into morning, afternoon and evening while hazards were dichotomized into yes/no. Cadre was initially coded as luggage = 1, security = 2 and later reverse-coded to change the base for risk estimates.

For purposes of ranking themes, scores were assigned subjectively based on occurrence of the specific hazards under each ergonomic theme (None=0, Few=2, Most=3 and All= 4) and the mean hazard occurrence score (MHOS) computed as the sum of scores over cases. This procedure facilitated comparison of means across themes and using Mann-Whitney U Test, the distribution of mean occurrence scores was compared across categories of Personnel Cadre. Normality was tested using Shapiro-Wilk test. Pearson chi-square was used to compare distribution of temporo-demographic and ergonomic variables across categories of personnel cadre.

Table 1: Distribution of temporo-demographic variables across cadres of personnel

The results of Shapiro-Wilk test of normality returned a p value < 0.0005. As a result, the assumption of normality was rejected and nonparametric tests were used in subsequent analyses. As illustrated above (Table 1) there were no significant differences in observation time across both cadres (p = 1.000). Males were the predominant gender observed but security guards were more in pairs than luggage attendants (p = 0.003).

Table 2: Distribution of hazards across cadres of personnel

Further, as illustrated in Figure 1 below, the mean occurrence scores for awkward posture and work environment were significantly higher in luggage attendants than security personnel (U= 16.50, p= 0.001 and U=12.00, p<0.0005, respectively) while the distribution of repetitive motions and pressure point scores were statistically similar across categories of personnel cadre (p= 0.319 and 0.755 respectively). 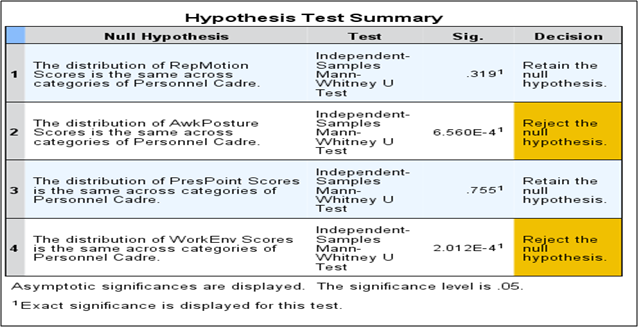 ­ Figure 1: Mann-Whitney U test for distribution of scores across categories of cadre

The prevalence of ergonomic hazards have been associated with musculoskeletal symptoms in previous studies. Repetitive motion is a risk factor for cumulative stress disorders and repetitive strain injuries [16], with repetitive neck twisting associated with neck musculoskeletal disorders [9]. The high incidence of repetitive motions in this study therefore indicates luggage attendants and security guards are at elevated risk of suffering these disorders. According to summary evidence by Niu (2010) [2], exposure to pressure point hazards can also affect musculo-skeletal, nervous and vascular systems even when incurred only for short periods of time.

In this study, security guards were twice (RR = 2.40) as likely to experience prolonged standing as luggage attendants. This was due to the fact that none of the security guards observed were provided with seats at their work stations. This is further worsened by the observation that the floors on which they stood were all non-resilient. These findings are contrary to best practices in occupational ergonomics. It is required that workers at risk of prolonged standing should, among other interventions, be provided with seats and anti-fatigue mats [17,18].

Further, prolonged standing has been associated numerous adverse health outcomes including with musculo-skeletal disorders, varicose veins and nocturnal leg cramps in a number of studies [17,19]. Based on the findings of this study, it is reasonable to argue that security guards working in supermarkets are at risk of suffering these morbidities due to their exposure to prolonged standing. This may also explain the observation that security guards were more than twice (RR = 2.50) as likely to exhibit more signs of fatigue compared to luggage attendants.

Compared to security guards, luggage attendants were five times (RR = 5.5) more likely to be exposed to forceful hand exertions. This was due to the fact that the nature of their work required frequent lifting of weights involving client luggage. A pooled study conducted among US workers from several industries associated forceful hand exertion with incidence of carpal tunnel syndrome[20].

Likewise a prospective study by Burt et al., (2013) [21] also implicated forceful exertion in the development of carpal tunnel syndrome even if the activity only occurs in 20% of the work-shift. Other studies have linked forceful exertion with increased risk to musculo-skeletal disorders of the shoulder according to Cutlip and colleagues (2015) [22]. Moreover, according to Nimbarte (2014) [23], epidemiological evidence also links forceful exertion with musculo-skeletal disorders of the neck. In the context of these evidences, the finding of this study suggests that supermarket luggage attendants may be at elevated risk of carpal tunnel syndrome as well as musculo-skeletal disorders of neck and shoulders due to their observed exposure to forceful hand exertion.

This study also found that on ergonomic principles, the work environment for luggage attendants was significantly poorer than for security guards (U=12.00, p<0.0005). This was due to the fact that two of the four individual constructs under work environment (confined space and extreme heights) only occurred among luggage attendants with the third (non-resilient floor) being equally common to both cadres. In literature, extreme heights (below knees and above shoulders) necessitates frequent bending and overreaching which are risk factors for lower back pain as well as disorders of neck and shoulders [24], while working in confined spaces exposes workers to risks of accidents and poor air quality [25].

This study established occurrence of ergonomic hazards among supermarket luggage attendants and security guards in the study area. Distribution of hazards differed significantly across cadres with some hazards affecting one occupational cadre than the other. It is necessary for supermarket managers to take mitigation measures to rectify the situation. Further research to document work-related musculo-skeletal disorders among supermarket luggage attendants and security guards is recommended. A similar survey should also be conducted in other Kenyan urban centers to enlarge the evidence base.

Some suggestions on mitigation include: