Extra-Renal Wilms’ Tumor in Left Lobe of Liver: A Case Report of the Rare Tumor with Review of Literature

Wilms tumor is the commonest childhood tumor. Extra renal Wilms' tumor is a nephroblastoma arising in locations other than kidneys. The tumor arises from misplaced metanephric blastema or is contemplated to arise from pluriotent cells. A metstasis, origin of tumor in kidneys and supernumery kidneys have to be ruled out to assign a diagnosis of extrarenal Wilms' tumor. It has been commonly reported to occur in retroperitoneum but also in inguinal region, pelvis, testis and colon. The age of occurence has been reported as Wilms; tumor in literature. It is mostly diagnosed post operatively. A preoperative biopsy combined with immunohistochemistry can help in diagnosing tumors in cases where neoadjuvant chemotherapy is anticipated. The WIlms'tumors in extrarenal location largely have favourable histology and are treated on same guidelines as Wilms' tumor. Here we present a case of extra renal Wilms' tumor arising in left lobe of liver. Liver as location for an extra renal Wilms' tumor was not found in literature.

Wilms’ tumor is the commonest childhood tumor with incidence of one per 10000 children.The tumor usually presents upto 15 years of age [1]. Incidence of extra renal Wilms’ tumor is estimated to be 0.5-1% of all Wilms’ tumors [2]. The presentation is progressive lump depending on location of tumor. The genesis of extra-renal Wilms’ tumor is controversial. Two possibilities that need to be ruled out, are metastatic lump from a Wilms’ tumor and teratoma. The tumor is believed to arise from mesonephric remanent or metanephric tissue. It may also arise from teratoma though this concept is not proven [3]. We present a case of a 5year child with an extrarenal Wilms’ tumor located in left lobe of liver as liver is not reported as site of occurrence for it.

A 5-year-old child presented with abdominal distension with pain and laborious breathing. He had no bowel symptoms of vomiting or constipation. He appeared chronically malnourished. The pulse rate was 132/min and blood pressure of 104/60 mm of Hg. The abdominal examination revealed a lump occupying all quadrants of abdomen. Liver was not separately palpable and there was no ascites. He had normal external genitalia. Contrast enhanced CT examination of abdomen showed an abdomino-pelvic mass of 13.4 x18.4x20.2 cm, abutting left lobe of liver and stomach. Both kidneys were normal with no cyst, mass, hydronephrosis or lymph nodes. Chest CT scan showed a 3cm nodule on diaphragmatic pleura on left side. Serum Alphafetoprotein levels were normal. The biopsy examination revealed a triphasic Wilms’ tumor. Immunohistochemistry (IHC) was positive for WT1, CK, Bcl2, CD34 and CD99 in strong favour of Wilms’ tumor. Patient was administered 8 cycles of neoadjuvant chemotherapy with weekly Vincristine 0.046mg/kg, five weekly, Adriamycin 2mg/kg and weeks 3 and 8 Actinomycin 45µg/kg. Patient was subsequently explored and found to have a tumor of 20x 14 x16 cm, densely adherent to or arising from left lobe of liver, free from diaphragm, parietal peritoneum and stomach. The diaphragmatic nodule indicated on CT scan was a 3 cm nodular extension from tumor abutting and indenting diaphragm. Both the kidneys were separately palpable and had no mass lesion, cyst or hydronephrosis. Tumor along with left lobe of liver was mobilized from diaphragm. Hilum of liver was dissected and left bile duct, left hepatic artery and left branch of portal vein was ligated and divided. Left lobe of liver along with tumor was excised along line of ischemia. Left hepatic vein was ligated and divided near diaphragm. The tumor was excised with the left lobe of liver. We found no attachments of tumor either to diaphragm, crus of diaphragm or the upper retroperitoneal area around bare area of stomach or aorta. Patient had uncomplicated recovery and was discharged on sixth post operative day. The tumor post operatively was reported on histopathology as Triphasic Wilms’ tumor. 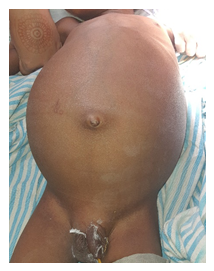 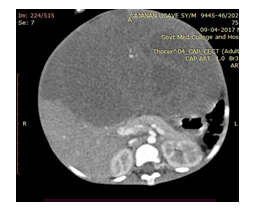 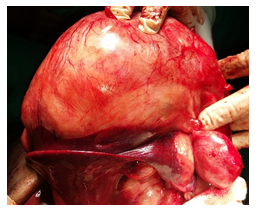 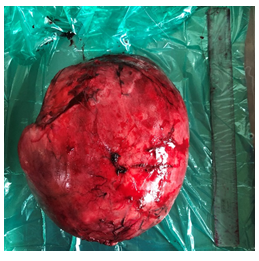 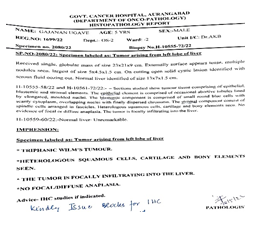 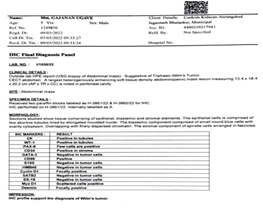 Figure 6: Immunohistochemistry of the tumor

Extra renal occurence of Wilms’ tumor was mentioned as early as 1961 by Moyson et al [4] as mediastinal Wilms’ tumor and in 1979 by Roy G.K. et al [5] in retroperitoneal location. Since then there have been periodic reports of extrarenal Wilms’ tumor located in various regions, other than retroperitoneum in mediastinum, inguinal region [6], sacrococcygeal area [7] and testis [8]. Wilms’ tumors are thought to occur in developmentally aberrated metanephric blastema. It matures into normal renal tissue by 36 weeks of gestation. The metanephric blastema persisting after last period of gestation may be harbinger of Wilms’ tumor [9]. The nephrogenic rests can be unifocal or diffuse and multifocal The nephrogenic rests may consequentially undergo sclerosis, lie dormant, become hyperplastic or transform into malignancy [10]. The nephrogenic rests can be seen placed in ectopic locations like inguinal canal, lumboscral area, adrenal glands, thorax, colon and heart [11]. They may be associated with some syndromes like Beckwith- Weidemann syndrome, hemihypertrophy or aniridia [12]. A small percentage about 1%, of nephrogenic rests undergo malignant transformation ,and this is result of mutation of WT1 gene at 11p loction [13]. Hence the tumors can be found occasionally outside kidneys in the locations of ectopic nephrogenic rests. Kim YW et al suggested possiblity of pluripotent cells forming hybrid of two neoplasms with nephroblastomatous elements with teratomatous tissue leading to extrarenal Wilms’ tumor [14]. Though ectopic nephrogenic rests have been diagnosed as early as 6 months,age of child at presentation with extrarenal Wilms’ tumor doesn’t differ much from the renal Wilms’ tumor and is consistently reported between 2 to 5 years. A case of age of 52 yrs has also been reported as adult extrarenal Wilms’ tumor [15]. The presentation of the tumors has been noted as asymptomatic mass in the location of the primary. It has nonspecific symptoms of abdominal pain or discomfort, weight loss and appetite changes. The mass effect may resemble a hernia in inguinal region [16], vaginal bleed [17], testicular swelling [18], or chest symptoms associated with mediastinal mass. No associated pediatric anamolies like Beckweith Weidemenn syndrome or congenital defects related to spine, cardiovascular system, gastrointestinal and genitalia were reported by any of the above authors. The diagnosis of extra renal Wilms’ tumor should mean nephroblastoma in extrarenal location that is not a metastasis, there should be no primary tumor in kidneys and kidneys should not be supernumery [19]. Extrarenal Wilms’ tumors are mentioned in literature as teratoid or classical Wilms tumor. They usually have favourable histology. There is no defined staging system for extrarenal Wilms’ tumor and National Wilms’ Tumor Study Group (NWTS) classifies all extrarenal Wilms’ tumors as stage II or above [20]. Haiyan Liang et al found only 3% of extra renal Wilms’ tumor cases to be metastatic. Older age, larger tumor size and preoperative tumor rupture were risk factors for recurrence and metastases in their study [21]. Immunohistochemistry can help in aiding diagnosis of Wilms tumor in extra renal location. Blastemal elements express CD56, CK22 and CK 8, while epithelial cells immunostain with CK22, CK18, CD57. Stromal cells express SMA, Actin Desmin, CD 34 [22]. Immunostaining with WT1 ocurrs in epithelial and blastemal components and helps differentiating Wilms’ tumor from other pediatric tumors [23]. The investigations and treatment of extrarenal Wilms’ tumor doesn’t differ from renal Wilms’ tumor. The NWTS or Societe Internationale D’oncologie Pediatrique (SIOP) don’t suggest a biopsy preoperatively or before neo-adjuvant chemotherapy for localised tumor. A biopsy is suggested before chemotherapy if the tumor is inoperable or metastatic. The NWTS suggests upfront surgery followed by chemotherapy while SIOP suggests neo adjuvant chemotherapy followed by surgery [24]. National Comprehensive Cancer Network advices upfront surgery for most of the cases as they are unilateral and operable. Those tumors that are deemed inoperable or metastatic or are bilateral should be offered neoadjuvant chemotherapy [25]. In our case we did a preoperative biopsy as hepatoblastoma was the primary diagnosis. The location of tumor was left lobe of liver with a normal se alfafetoprotein value. The diagnosis was made on preoperative biopsy and confirmed with Immunohistochemistry. Since the tumor was over 20 centimeters in size, we opted for neoadjuvant chemotherapy followed by surgery. We performed a left hepatic lobectomy as left lobe was present as very thin rim of normal liver parenchyma. The post operative histopathology confirmed Triphasic Wilms tumor.