Left atrial dissection is a rare complication of cardiac surgery and percutaneous cardiac procedures. It is defined as a false blood-filled cavity or lumen from mitral annular area to the left atrial free wall or into the atrial septum thereby creating a new chamber with or without communications with the true left atrium [1]. It has been most commonly described following mitral valve surgery [1].

Cases of left atrial dissection have also been reported following aortic valve surgery chest, CABG, trauma acute MI, infective endocarditis, radiofrequency ablation for atrial fibrillation and rarely following percutaneous coronary interventions [2]. The case we describe here occurred in the setting of a percutaneous coronary intervention, such occurrence is less common.  The purpose of our case report is to increase recognition of this rare but potentially lethal complication and to review management strategies.

A 77-year-old man with known obstructive coronary artery disease presented to the cath lab for coronary intervention of his left circumflex artery. This was a trifurcation lesion involving the 2nd and 3rd obtuse marginal branch as well as the ongoing AV groove circumflex.  Due to significant vessel overlap the guide wires had to be repositioned multiple times, wires were placed in the OM branch and the ongoing Left circumflex. During the procedure one of the wires was inadvertently advanced into the AV circumflex branch. Initial balloon angioplasty was then done with a 2.0 balloon (Euphora, Medtronic) ) A 2.75 x 15 mm stent (Resolute Onyx, Medtronic) was deployed in the obtuse marginal branch and 3.0 x 23 mm stent(Resolute Onyx, Medtronic) was delivered in the proximal left circumflex. Kissing balloon inflations in the two obtuse marginal branches were performed. Following that, the proximal circumflex was dilated with a 3.0 noncompliant balloon. Final angiographic results were good. Review of the films post procedure suggested that there may have been faint contrast staining from wire in the left atrial circumflex branch.

About an hour following the procedure the patient developed chest discomfort and became hypotensive with a blood pressure of 78/57 mmHg. He was successfully resuscitated with iv fluids. Repeat EKG did not show any significant changes.  An urgent echocardiogram was performed. The echocardiogram revealed an independently mobile linear structure in the left atrium. It extended the perimeter of the left atrium and terminated in the mitral and lateral annulus. 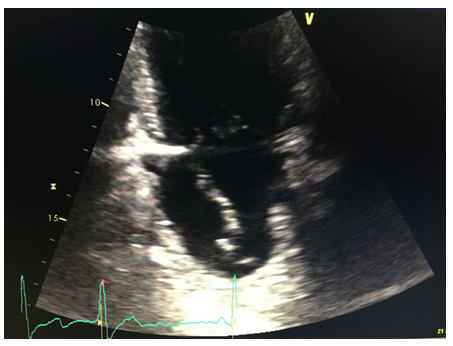 A CT angiogram of the chest was performed subsequently. It revealed a low density mass along the posterior aspect of the left atrium measuring approximately 8.7 x 7.6 x 5.2 cm, within the mass, high density material concerning for continued hemorrhage and active expansion was suspected (Figures 3,4). A repeat echocardiogram was then immediately performed. The echocardiogram revealed that a dissection was had enlarged and was filled with thrombus.

Obstruction of pulmonary venous inflow and  mitral flow can result in CHF and low output syndrome. This is a dreaded complication. In view of CT scan suggesting ongoing bleeding a decision was made to transfer the patient to a tertiary care hospital. At the tertiary care facility the patient remained hemodynamically stable. It was decided to observe the patient and perform serial imaging. The patient's intra atrial hematoma remained stable and did not enlarge further. He was discharged on the 10th postop day. 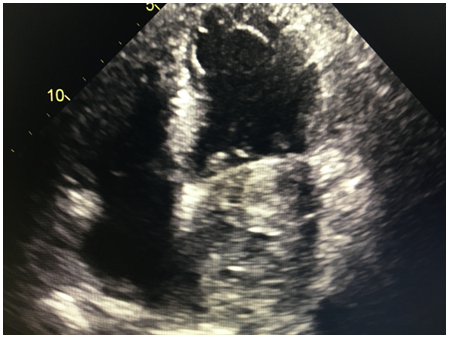 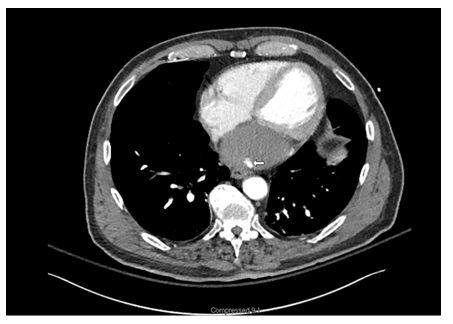 Incidence of left atrial dissection is low and is reported to be 0.16% following mitral valve surgery and 0.02% following coronary artery bypass grafting [3]. This condition is being increasingly recognized following surgery because of increased use of TEE since 1990 [4]. Left atrial dissection following PCI is less common and literature search is limited  to sporadic case reports, it is only after 2000 that case reports of LatD as a complication of percutaneous procedures started appearing in literature [5,6].

Left atrial dissection has a variable clinical course. Cases described have ranged from self-limiting stable disease to lethal outcomes. Mortality rate of up to 13.8% has been described in surgical literature [3]. Left atrial dissection presents immediately and majority of the cases, though it has been reported to occur months or even years after the procedure [4]. Dyspnea is the commonest presenting symptom and present in about a quarter of the patients. Chest pain and arrhythmias have been reported, about 10% of the patients are asymptomatic [1].

Our case was readily recognized by transthoracic echocardiography. Duplication of left atrial free wall is the most common abnormality seen on echocardiography. Left atrial dissection, especially if there is thrombus in the false lumen, can mimic left atrial mass. Cardiac tamponade, hiatal hernia, plueropericardial cysts causing extrinsic compression of the left atrium can also mimic left atrial dissection [4]. Multimodality imaging has been recommended to confirm diagnosis of this rare condition. In our case CT scanning coupled with TTE corroborated the diagnosis.

Pathogenesis of left atrial dissection is varied. Majority of the cases arise from injury along the AV junction which results in separation of the endocardium of the left atrium causing the dissection cavity. Other entry points are also possible and likely explain LatD arising  from aortic valve replacement, percutaneous coronary interventions and pulmonary vein cannulation [4]. Similar to the cases reported by Solzbach and Cresce et al, we too believe that a distal perforation from guide wire manipulation resulted in left atrial injury [5].

Indication for surgery should be based on clinical presentation [2] in patients with hemodynamic instability prompt surgical approach is warranted. Surgical technique involves obliteration of the false cavity and addressing the entry point if possible. Medical management or non-operative approach, supported by serial imaging is reasonable in a stable patient.  Reversal of anticoagulation when feasible should also be considered.