Management of Chilaiditi syndrome: Our Experience and Literature Review

Chilaiditi syndrome is a rare condition defined by the presence of gastrointestinal symptoms associated with the radiological finding of segmental interposition of the intestine between the liver and diaphragm. Although rarely identified as a source of abdominal pain, Chilaiditi syndrome has clinical significance as it can lead to a number of serious complications including bowel obstruction, perforation and ischemia. We report here on our experience and also examine the relevant literature and discuss measures to overcome this diagnostic dilemma. General surgeons should be aware of this disease and consider it in the differential diagnosis of acute abdomen.

Chilaiditi syndrome is a rare condition characterized by colonic interposition that is accompanied by a wide range of symptoms that include abdominal pain, chest pain, shortness of breath, constipation, nausea and vomiting. Due to its wide constellation of findings, diagnosis can be difficult. Its incidence worldwide is estimated to be 0.025%-0.28% with 4:1 male predominance [1,2]. It is also noted to be more common in the elderly population [3]. We wanted to report our experience above all to recall that this syndrome, although rare, must always be borne in mind, particularly when in elderly patients there is discordance between the radiological images (Chilaiditi sign) and the typical abdominal clinical signs of perforation. In these cases, the finding of negative clinical objectivity always obliges the patient to undergo further diagnosis in order to avoid unnecessary and harmful emergency laparotomy/laparoscopic surgical treatment.

We report the case of an 87-year-old patient who came to our observation for abdominal pain, especially in the lower abdominal quadrants. The patient had been reporting stool-clogged alveus for about a week. An abdominal X-ray was taken, showing some hydro aerial levels. The diagnostic procedure was completed with a CT scan of the abdomen (Figure 1), which showed the sign of Chilaiditi and a suspected tumor in the sigma, which was subsequently confirmed by colonoscopy. The patient underwent sigma-resection.

We report the case of an 81-year-old patient who came to our observation for abdominal pain, prevalent in the epigastrium, and stool-clogged alvus. Once the traditional diagnostic procedure had been initiated, a direct X-ray of the abdomen was taken, showing an image of a subdiaphragmatic aerial sickle suggestive of perforation of a hollow viscera. This finding contrasted with the patient's clinical condition; therefore a differential diagnosis was made, although rarely observed, of Chilaiditi syndrome due to the patient's age. The diagnostic procedure was completed with a CT scan of the abdomen (Figure 2), which ruled out a gastrointestinal perforation and confirmed the diagnosis of Chilaiditi syndrome, demonstrating the hepatodiaphragmatic interposition of the distended colon. The decision was taken to admit the patient to the medical ward and to treat him conservative. 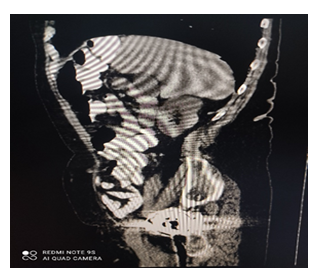 Figure 1: CT of the abdomen. Red arrow shows the interposition of bowel loops anterior to the liver. 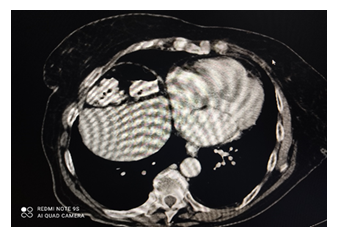 Figure 2: CT of the abdomen. Red arrows show loops of bowel in the right subdiaphragmatic space.

We have analyzed the cases in the literature and list the most characteristic ones and their treatments in table 1.

The median age of the seven patients at presentation was 63 years (range, 35-87 years) and the male to female ratio was 8:5. The most frequent symptom of Chilaiditi syndrome was abdominal pain (no=11/13). All of the cases were diagnosed by CT (12/13), in which the distension of the colon interposed between the liver and the diaphragm was revealed. One patient exhibited atrophy of the right lobe of the liver and an additional patient exhibited the anatomic abnormality of a congenital liver split. In addition, a plain abdominal or chest X-ray was performed, which showed a bowel shadow in the subphrenic space. The treatment included conservative treatment (no=8/13) and surgical intervention (no=5/13). The conservative treatment included fasting, nasogastric decompression, fluid supplementation, enemas, peristalsis stimulation.

Chilaiditi sign is a radiological finding that occurs when a segment of a large bowel loop or small intestine is interposed between the liver and a diaphragm. When this causes gastrointestinal symptoms, it is known as Chilaiditi syndrome [13]. First identified in 1910 by the physician Demetrius Chilaiditi (Greek of Ottoman nationality born in Vienna) as a "right" interposition, Poppel and Herstone in 1942 also observed the "left" interposition, describing it as a "retroposition" of the colon, but it was not confirmed by barium studies [14,15]. In the era of computed tomography, Oldfield identifies and describes the left variant. It is probably due to malposition due to intestinal malrotation or malfixation. It may be more frequent on the right especially in obese people and in cirrhosis without ascites. It may be transient and reducible in one third of cases. If asymptomatic (if on the right, it is called "Chilaiditi's sign") it is an occasional finding during radiological investigations, laparoscopy, autopsy, otherwise, if symptomatic, (if on the right, it is called Chilaiditi's syndrome) [16]. Temporary or permanent hepato-diaphragmatic interposition of the colon, small intestine (rare) or stomach (exceptional) is infrequent and generally asymptomatic, but may also present with a wide variety of clinical symptoms, mainly gastrointestinal, but also chest pain and dyspnoea. It should also be remembered that this condition can cause serious complications, such as transverse colon volvulus, which is a rare but serious cause of intestinal obstruction [17]. In the literature, "interpositio colonis" is, as mentioned above, uncommon, occurring in 0.02-0.2% of routinely performed chest X-rays, with a male/female ratio of 4:1 [18]. Some studies report even lower incidences, in the order of 0,002%, i.e. 1 in 50.000 [19]. There has been an increase in the prevalence of this condition in patients over 65 years of age: from 0.02% to 0.2% in males and from 0.006% to 0.02% in women; in addition, one study calculated a prevalence in the geriatric population of 1% [20]. Normally, ligaments and fixation of the colon prevent it from interposing itself between the liver and the diaphragm. Some anatomical variations in these structures lead to the pathological interposition of the colon observed in Chilaiditi syndrome. These variations may include absence, laxity or elongation of the suspensory ligaments of the transverse colon or the falciform ligament. Other factors that may predispose to the development of Chilaiditi syndrome include congenital malpositions, functional disorders such as chronic constipation caused by elongated and redundant colon, gaseous distension of the colon, small liver due to cirrhosis or hepatectomy, ascites due to increased intra-abdominal pressure, significant weight loss in obese patients and raised diaphragm or diaphragmatic paralysis (which can occur in conditions such as diaphragmatic muscle degeneration or phrenic nerve injury), chronic obstructive pulmonary disease causing enlargement of the lower thoracic cavity and multiple pregnancies. Intellectual disability and schizophrenia are also associated with anatomical variations that cause Chilaiditi sign. There have been a couple of cases describing Chilaiditi syndrome induced iatrogenically by bariatric surgery, insertion of enteral feeding tubes and colonoscopy [13,21-23]. The most common presenting symptoms in patients with Chilaiditi syndrome are abdominal pain, anorexia, nausea, vomiting, flatulence, constipation, changes in bowel habits followed by respiratory distress, and less frequently cardiac symptoms such as angina like chest pain and arrhythmias. These symptoms are usually worse at night while the patient is supine. Rarely, a patient will present with a combination of these multiorgan symptoms. The gastrointestinal symptoms may range from mild to severe (e.g., acute abdomen)[13,24]. In rare cases, other symptoms besides those associated with the gastrointestinal tract, such as respiratory distress and angina-like chest pain, may also be observed [25]. Chilaiditi syndrome may also be an indirect manifestation of certain abdominal malignancies, with or without peritoneal metastasis. In the present study, three of the previously reported cases were accompanied with malignancies, one with rectal cancer, one with sigma cancer and the other with mesenteric lymphosarcoma [10]. The complications of Chilaiditi syndrome may include intestinal obstruction, volvulus and perforation. In rare cases perforated subdiaphragmatic appendicitis may occur as a complication of Chilaiditi syndrome [26]. Diagnosis of the disease is made primarily through imaging, with CT scans being the imaging modality of choice. There are three radiographic criteria that define Chilaiditi’s sign; the right hemidiaphragm must be superiorly displaced to the liver by the intestines, the bowel must be distended by air, and superior aspect of the liver must be positioned below the level of the left hemidiaphragm. This specific position of the liver is due to the downward and medial displacement caused by the intestines [21-28]. A characteristic marker of Chilaiditi sign is the observation of air below the diaphragm, with visible haustral folds or valvulae conniventes between the liver and the diaphragmatic surface. Pneumoperitoneum normally shows a crescent-shaped gas shadow under the diaphragm without haustral folds or valvulae conniventes, and altering the posture of the patient changes the position of the gas [29]. On plain radiograph, this sign can often be concerning for free air within the abdomen, which is of particular concern if the patient is symptomatic. Often the greater anatomic detail of abdominal CT scan is needed to distinguish between Chilaiditi’s sign and pneumoperitoneum [30]. Interventions are not required for asymptomatic patients with Chilaiditi sign. By Chilaiditi syndrome the treatment is usually conservative. Conservative treatment, which included bed rest, nasogastric decompression, fluid supplementation, enema, laxatives and the discontinuation of offending medications (for example psychotropic medications) [31]. In patients, who present with complicated abdominal pathologies, including the intestinal obstruction, such as volvulus, intestinal ischemia or perforation, surgical intervention is warranted [32]. Surgical options may be performed using open, laparoscopic or robotic surgery with a variety of procedures such as a resection of the involved part of the colon, colopexy or hepatopexy [33,34]. In our second case, in spite of the negative clinical objectivity, the doubtful radiological image of the direct X-ray of the abdomen imposed on us the primary objective of excluding the diagnosis of perforation of a hollow viscera, which would have placed an indication for emergency surgery. Although Chilaiditi syndrome has a low frequency, it should be considered in the differential diagnosis of acute abdomen.

Management for Chilaiditi syndrome is usually conservative with nasogastric decompression, stool softeners and/or enemas, and intravenous hydration. Conservative management is preferred and usually sufficient, but surgical treatment may be indicated for intestinal obstruction, ischemia, or perforation.

Rare documented complications of Chilaidite syndrome requiring urgent surgical intervention include cecal and colonic volvulus, subphrenic appendicitis, internal hernia, and cecal perforation. Chilaiditi syndrome may also be the initial presentation of malignant tumors requiring rapid medical or surgical management. Otherwise, elective surgery may be considered for unresolved symptoms. There is no clear consensus on the best surgical approach to correct intestinal interposition. A variety of procedures described in the literature have been successfully performed, including colon resection, hepatopexy, colopexy, right hemicolectomy, sigmoidectomy, and subtotal colectomy. Minimally invasive procedures, such as laparoscopic colopexy, have been used and may also be considered.