We examined characteristics trends in early breast cancer patients receiving neoadjuvant chemotherapy (NAC) over a 16-year period. Our primary objective was to analyze variations in tumor stage and subtype over time. Secondary objectives included analyses of type of surgery and pathological response, from January 2005 to May 2021, 1623 patients receiving NAC were identified. Three periods were determined: 2005-2009 (P1), 2010-2014 (P2), 2015-2021 (P3). Correlations between periods and patient features with cT stage, pathological breast and axillary node response, pathological complete response (pCR), and type of surgery were assessed in univariate and multivariate analyses. We observed a significant increase in cT0-1 and N0 stages with periods (from 6.8% at P1 to 21.2% at P3, and from 43.2% at P1 to 55.9% at P3, respectively) and in the proportion of HER2+ and triple negative (TN) subtypes. In a multivariate analysis, a decrease of cT2-3-4 tumors during P3 was observed for HER2+ (OR:0.174; p=0.004) and TN tumors (OR:0.287; p=0.042). In-breast pCR and pCR were observed in 40.8% and 34.4% of all patients, respectively, with strong association with tumor subtypes, but not with tumor size in multivariate analysis (37.0% pCR for cT0-1 tumors, 36.4% for cT2 tumors, 29.1% for cT3 tumors (cT0-1 versus cT≥2; p=0.222)). pCR was negatively associated with cN1 stage (OR:1.499; p<0.001 for cN1 patients compared to cN0). We observed an increase in the proportion of small cT0- 1 and N0 stages treated with NAC, especially in HER2+ and TN subtypes. No significant impact of tumor size on pCR rates was found.

Neoadjuvant chemotherapy (NAC), as defined as the administration of cytotoxic treatment before tumor surgical removal, has been implemented in breast cancer (BC) during the last 50 years, encompassing different objectives. Initially dedicated to inoperable BC to convert it into a surgically removable disease [1,2], NAC was then widely developed in operable BC when frontline breast-conserving surgery with “in sano” margins was not feasible [3], based on ac-cumulating data showing a high rate of clinical and pathologic response (pCR) as well as identical survival outcome when compared to adjuvant chemotherapy [4]. Yet, the development of more and more sophisticated oncoplastic techniques could also increase the possibilities of immediate breast-conserving surgery [5,6]. Even though some initial expectations in favor of NAC were not confirmed, including a potential survival advantage over adjuvant chemotherapy by an early impact on the hypothetic surgical stimulation of micro-metastatic disease and tumor shedding [7], the interest in NAC has been further boosted during the last decade in relation with several observations. First, molecular analysis of BC revealed that the disease was composed of different subtypes with distinct survival outcomes [8,9], including HER2-positive and triple-negative BC, two subtypes in which both survival benefits from adjuvant chemotherapy and probability of reaching pCR after NAC are the highest. Second, a tight relationship was demonstrated between the achievement of pCR and survival, most notably in the latter subtypes [10-12]. Third, recent randomized trials found that in those patients with residual invasive disease after preoperative systemic treatment, adjuvant trastuzumab emtansine in HER2-positive BC treated with trastuzumab-based NAC [13] and capecitabine in triple negative (TN) BC treated with anthracycline-taxane NAC [14] both significantly improved survival. These recent practice-changing results have resulted in making NAC a standard of care in most of these BC subtypes, even when initial breast conservation may be achieved by frontline surgery. In this retrospective monocentric study, we have examined how the use of NAC has evolved during the last 16 years in a French comprehensive cancer center, including clinical and pathological features of treated patients, as well as pathologic complete response (pCR) results. The primary objective was to analyze variations in tumor stage and subtype over time. Secondary objectives included analyses of the type of breast and axillary surgery as well as pathological axillary and in-breast response.

Medical records of early BC patients treated from January 2005 to May 2021 were retrieved from our institutional clinical databases for retrospective analysis. This cohort study was approved by our institutional review board (Registered study in Clinical research Institute: NAC-TS-IPC 2021-026). Patient and tumor characteristics, periods, treatments, and patho-logical results were collected. We included in the present study 1623 patients treated with NAC, without metastasis at initial diagnosis (figure 1). Patients receiving NAC were staged using clinical examination, mammography and ul-trasonogaphy, breast MRI. Search for distant metastases using either PET-scan or a combination of CT-scan and bone scan. Evaluation of lymph node status was determined by sentinel lymph node biopsy (SLNB) with or without completion axillary lymph node dissection (ALND) or only ALND. SLNB was realized before NAC for cN0 patients with cT ≤ 5 centimeters. The method used for the de-tection of SN was a combined technique or isotopic only detection during the last years. NAC included anthracyclines plus taxanes-based regimen. All patients with HER2+ dis-ease received trastuzumab during NAC. Patients who had residual components of ductal carcinoma in situ were assessed as having a breast pathological complete response based on the National Surgical Adjuvant Breast and Bowel Project criteria [15]. Patients with axillary residual lymph node tumor (ypN1) were assessed as having no pathological complete response. Pathological complete response (pCR) was defined as [ypT0 or ypTis] and [ypN0 or pN0sn or pN1sn without ALND or ypNx (absence of axillary surgery)] [16]. Endocrine Receptor (ER) and HER2 status were determined according to French guide-lines (estrogen and/or progesterone receptors by IHC with a 10% threshold for endocrine re-ceptor (ER) positivity; IHC HER2-positivity score of 3+ and/or HER2 amplification by in situ hybridization) [17,18]. Five IHC tumor subtypes were defined as surrogates for molecular subtypes based on tumor grade, ER and HER2 status: luminal A-like (ER+/HER2-/grade1 or 2), luminal B-like (ER+/HER2-/grade 3), luminal B-like HER2+, HER2+ (ER-/HER2+), and triple-negative (ER-/HER2-) [16]. The work has been reported in line with the STROCSS criteria [17]. 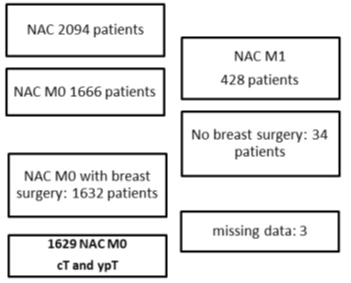 Descriptive statistics were used to describe the categorical (counts and frequencies) and continuous (median and range) variables. Characteristics of patients were compared by different periods: Period 1 (P1) 2005-2009, period 2 (P2) 2010-2014, and period 3 (P3) 2015-2021 by using χ2 test for categorical variables, and Kruskal-Wallis test for continuous variables. The main characteristics of patients and tumors were categorized (cT0-1 stage vs. cT2-3-4, ypT0-is vs. ypT≥1, pCR vs. no pCR, breast conservative surgery vs. mastectomy) and association with other variables were explored in univariate, and multivariate analysis by binary logistic regression for significant criteria in univariate analysis. Statistical significance was set as p ≤ 0.05. Analyses were performed with SPSS version 16.0 (SPSS Inc., Chicago, Illinois).

3.1. Characteristics of patients according to periods

3.2. Axillary surgery details for all patients and for clinically N0 patients

Table 2: Axillary surgery for all patients and for clinically N0 patients.

3.3. cT Stages according to periods

Table 4: Characteristics of patients according to clinical tumor size, cT0-1 versus cT2-3-4. 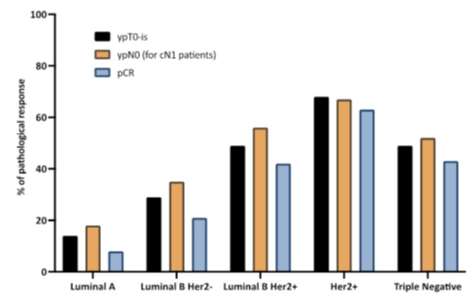 The pCR rate after NAC was neither higher nor significantly different for tumors <2cm compared with tumors ≥2cm, especially for HER2+ and TN subtypes for which adjuvant therapy can be offered to improve prognosis. The pCR rate appears to correlate with intrinsic tumor characteristics and clinical lymph node status rather than with tumor size. These results suggest that it is possible to propose NAC in patients with these tumor subtypes, in case of clinically invasive axillary lymph nodes (cN1) but also in the absence of suspicious lymph nodes (cN0) when the tumor is smaller than 2cm. An evaluation of overall survival and recurrence-free survival comparing patients with these sizes of tumors and adjusted for other prognostic factors should be performed to confirm these NAC indications.

Resources: All authors contributed in patient’s inclusion in the study.

As this was a retrospective non-interventional study, no formal personal consent was required.