Operative Prognostic Scores for Pelvic Exenterations for Gynecological Cancer: When Should we Operate?

Purpose: Pelvic exenteration (PE) for locally advanced gynecological cancer or local recurrence is in some cases the only option. Because of the impact of this major surgery, our objective was to identify prognostic factors in order to establish an operative prognostic score.

Methods: Patients were characterized by age, type of PE (anterior, posterior, total, atypical, preservation of pelvic floor and perineal excision, extended or not to other structures), indication, curative or palliative surgery and prior radiation therapy.

Conclusion: These scores could help to predict overall survival and help decide when to perform this surgery.

First described in 1948, pelvic exenteration (PE) has evolved through time in terms of techniques and mortality, which has decreased from 22% to 5.3% thanks to reconstructive measures and intensive medical management. The surgical procedure has changed, from a purely extirpative exenterative one, to an operation that includes a reconstructive phase with continent or non-continent urinary reconstructions, colon sparing surgery, preservation of the anal sphincter, vaginal and pelvic floor reconstruction [1-3]. Complete resection is the most important prognostic factor in surgery for pelvic tumors but radical margins are sometimes difficult to obtain because of the proximity of adjacent organs. In these cases, PE can be a good indication to cure persistent or recurrent cancer after prior pelvic radiation therapy. Fundamentally, the disease must be confined to the central pelvis and appear completely resecable with no distant metastases. In case of primary disease, the 5-year survival rates following pelvic exenteration performed with curative intent, range from 32% to 66% and for patients with recurrent disease between 0% to 23% [4,5]. Significant factors affecting survival have been described: time from initial radiation therapy to exenteration, size of the central tumor and presence of pelvic sidewall fixation based on clinical examination. Despite the development in pelvic imaging, abortion of surgery or incomplete resection in the operative room can occur in up to 50% of cases [6,7]. Hence, a careful selection of patients in a multidisciplinary setting is of paramount importance. In this perspective, the objective of our study was to identify factors of curative resection in order to establish pre- and postoperative prognostic scores to predict survival outcomes.

From 1985 to 2015, we conducted a retrospective unicentric study at Paoli Calmettes Institute, in Marseille. All data was obtained from patients medical records. This study was approved by the local ethic committee (PREXscore-IPC 2021-027). According to French law, because it was a retrospective study without treatment modification, it was not considered mandatory to obtain informed consent from patients, however data were analyzed after all patient’s informations were fully anonymized. Patients who had undergone pelvic exenteration with curative intent for cervical, vaginal, vulvar, endometrial and fallopian tube cancers were included. Ovarian cancers were not included. Complete resection R0, defined by a microscopically margin-negative resection, has proven its impact on survival. Therefore, PE with R0 resection was considered as a curative PE. A R1 resection (positive microscopic margins) or R2 resection (gross residual tumor that was not resected and macroscopic margin involvement) was considered as a palliative PE [6-9]. The original classification of pelvic exenteration defined three groups: anterior, posterior and total PE. A subclassification of pelvic exenteration into type I (supra-levator), type II (infra-levator), and type III (with perinectomy) addresses the extent of tissue resection and anatomical changes within each group of pelvic exenterations [10]. Anterior exenteration was defined as the removal of reproductive tract and bladder, posterior exenteration as the removal of reproductive tract and recto sigmoid colon, and total exenteration as the removal of reproductive tract, bladder and recto sigmoid colon. Atypical PE was defined by PE without excision of bladder or rectum but with lateral pelvic excision and ureteral resection with reimplantation or partial cystectomy if necessary. Extended PE was defined as the removal of extra pelvic organs. Laterally extended pelvic resection refers to PE that includes resection of pelvic side wall and floor muscles (obturator internus muscle, iliococcygeus muscle, pubococcygeus muscle, internal iliac vessel system) [11,12].

The following characteristics were collected for each patient: age, site of cancer, tumor size, primary or recurrent tumor, previous therapy including radiation therapy and/or chemotherapy. Disease staging was established using clinical examination, pelvic MRI, bone scintigraphy, thoracic-abdominal-pelvic scan, and recently PET-CT [13]. This staging enabled us to define lateral pelvic extension of the tumor and its relation to others organs, to eliminate metastasis, to confirm resectability and to decide on the type of PE. Types of pelvic exenterations performed, including methods of urinary, digestive and vaginal reconstructions were documented. Pathological features (pathological size of invasive tumor (pT), histological type, pathological lymph node involvement (pN) and type of adjuvant therapies before surgery (chemotherapy, radiation therapy) were collected. Date of diagnosis, date of surgery, time from diagnosis to relapse, and time and status from surgery until last follow-up or death were specified. Postoperative mortality and morbidity was defined by death of any cause or adverse events within 90 days post operatively, based on the National Cancer Institute’s Common Terminology Criteria for Adverse Events (NCI-CTCAE) v4.03 classification.

Comparison of criteria was performed using Chi2 test. Follow-up was measured from the date of diagnosis to the date of last follow-up information for censored patients. Disease-free survival (DFS) was defined as the duration from diagnosis to any recurrence. Overall survival (OS) was defined as the duration from diagnosis to death of any cause. Data concerning patients without disease progression or death at last follow-up were censored. Survival curves were estimated using the Kaplan-Meier method, and compared with the log-rank test. Multivariate survival analysis were analysed using Cox model. All statistical tests were two-sided with a 5% level of significance and analyzed with SPSS 16.0 (Statistical Package for Social Sciences; SPSS Inc., Chicago, Illinois). We established three scores using Hazard Ratio (HR) value for each criteria in a Cox model analysis, a curative predictive score, a pre-operative and a post-operative prognostic score: distributionof patients for each score and accuracy of these models by AUC (area under the ROC curve) values was determined.

3.2 Interval time between initial treatment and PE for recurrence 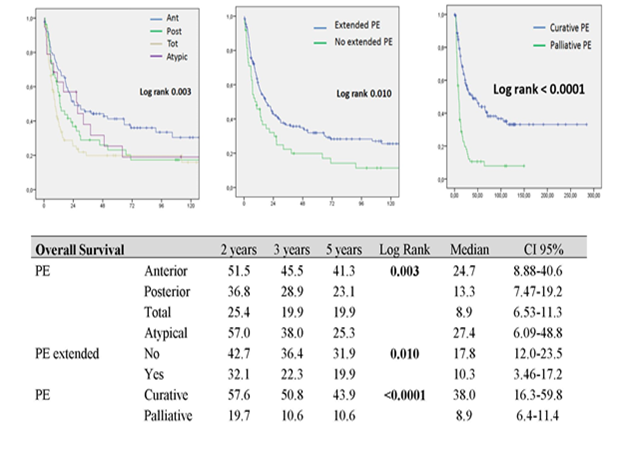 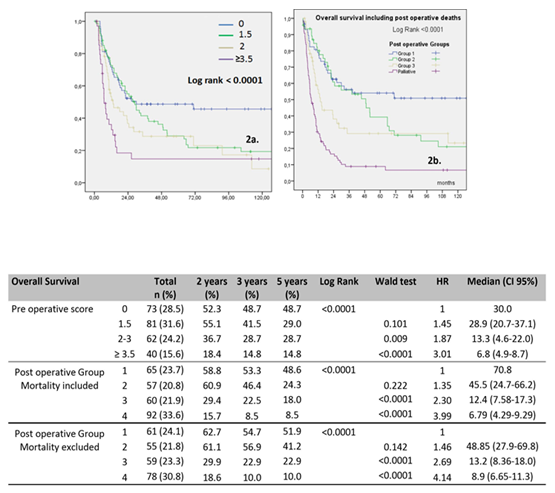 Figure 2: Overall survival curves according to Pre-operative (Figure 2a) and Post-operative prognostic scores (Figure 2b)

Tools in order to guide the decision to perform extensive surgery in case of advanced gynecological cancer or local recurrence are lacking. The balance between oncologic benefit and operative morbidity is difficult to assess. Since first described by Brunschwig, the perioperative and postoperative mortality of PE rate has decrease from 23% to 5% -14% [14-17]. The mortality rate in our population was 7.6%. The improvements in pelvic filling techniques, urinary reconstruction and perioperative management have reduced the rate of perioperative morbidity from 73 to 50% [17-20]. Our data showed a 90-day complication rate of 56.3%. Age and preexisting medical disease (ASA III) have been identified as factors correlated with a higher risk of postoperative death with a cut off of 70 years old [4]. We believe that physiological age, rather than chronological age , should be considered when selecting patients, reason why we did not set an age limit to perform PE in our study. Our series is one of the largest published to date. We found equivalent 3 and 5 year overall survival rates (36.8 and 32.3 %) in comparison with previously published studies who described survival rates around 30 % at 5 years [4,5]. The 2 and 5-year progression-free survival (PFS) rates were 50.5% and 35.8%, compared to 68.2% and 41.1%, respectively in a previously published study [4]. A non-curative resection was more frequent in case of posterior PE and when tumors were developed in the lateral pelvic wall or when they required enlargement. Performing radiotherapy ≥ 45 Gy helped obtain a curative resection. Study of prognosis factors helped us establish a preoperative score to classify patients into 4 groups. Then, survival was analyzed in each of these groups. We found that patients with pre operative score ≥ 3.5 had a poorer 5-year survival. This makes the benefit of surgery in this population questionnable. Indeed if survival is already bad for these patients, is it really appropriate to peform a surgery at high risk morbidity. Elaboration of a preoperative score could allow to select patients who could benefit from this surgery. Moreover, for selected patients with palliative intent, PE can be useful in case of symptomatic patient. The same analysis was done after surgery in order to raise the question of adjuvant treatments. We showed that survival in case of anterior, non-extended PE or curative was higher with a 5 year survival rate of 41.3, 31.9 and 43.9 months respectively. Therefore, these datas could help to decide when it is necessary to add adjuvant treatments. One of the limits of this score is the unpredictable aspect of this type surgery, since a more extensive surgery can finally be required based on per operative findings. In our study, we did not specify the clinical charactericstics of the patients particularly their weight and nutritional status, which are known to influence morbidity and mortality. Recently, others promising prognostic factors have been identified: tumor size greater than 5 cm, mesorectal lymph node involvement and vascular emboli [14]. These data were not available in our population but it could be interesting to analyse these informations for furthers studies. Interval time between initial treatment and PE for recurrence is a controversial subject. In our study, this interval was ≥ 24 months in 41.8% of patients and a higher curative PE rate was obtained for these patients: 74.6% versus 57.6%. Longer interval time between initial treatment and PE for recurrence has been described to be associated with a better prognosis assuming that tumors that take longer to recur, are more indolent whereas others did observed such a correlation [3,15,16]. After preoperative radiological staging, we chose not to include in our study patients with positive lymph node involvement, considering it as a contraindication to curative surgery. Although some authors described that lymph node status was not related to survival, even in case of positive involvement if nodes are completely resected during surgery, most studies consider lymph node metastasis as an important negative prognostic factor [5,17-20]. Our database is collected over 30 years. Advances in imaging and management of these cases have been observed over this period of time. An initial analysis was made with comparing different periods, but number of patients was not enough to obtain significant analysis. We chose to include PE for cervical, vaginal, vulvar and endometrial cancer because of their similarities in treatment and survival, expect for ovarian cancer which was excluded . Despite the heterogeneity of the included dataset, we decided not to analyse the results depending of the type of the tumours in order to maintain comparable groups. A recent study based on endometrial cancer alone, reported higher survival rates compared to our data with 72.6% 5 year survival rate and a 59.4% 10 year survival rate for PE considered as curative [21].

These scores are valuable tools that can help predict curative resection and overall survival and therefore provide a guidance on when to perform surgery. This type of surgery should be discussed in a collegial manner and take into account the patient overall with the help of tools such as our prognostic score which could allow to avoid extensive surgery in cases that would provide little profit.

The authors declare that the research was conducted in the absence of any commercial or financial relationships that could be construed as a potential conflict of interest.

GH, EL, LS, SK conceived the study and participated in its design.

GH, LS, SK participated in critical revisions of the manuscript with respect to important intellectual content.

All authors contributed to the article and approved the submitted version.

The original contributions presented in the study are included in the article/supplementary material, further inquiries can be directed to the corresponding author/s