Low grade fibromyxoid sarcoma is a rare soft tissue sarcoma with typical histological findings. Growing as a painless mass, it is commonly seen in proximal extremities and trunk. Absence of strict protocols in diagnosis causes difficulty in its approach. Present case is a 52year male who presented with abdominal lump and absent right testis. Clinico-radiological diagnosis suggested a testicular malignancy. Histology showed low grade fibromyxosarcoma. A brief case report with review of literature is presented.

Soft tissue malignancies are rare tumors which according to The world Health Organisation(WHO) are further subclassified in approximately 70 subtypes, each characterized by a distinct morphology, low grade fibromyxoid sarcoma(LGFMS) being one of them. The majority of these are initially misdiagnosed as benign entities, such as a fibroma or fibromatosis, and later presented with metastases. One such differential is a testicular neoplasm in a patient who presents with abdominal lump and absent testis in rt scrotum. It is seen that 1% of all cancers found in the global male population are represented by testicular neoplasms which are seen 5-10 times more commonly in cryptorchid testis. Most common type of testicular neoplasm seen in undescended testis are seminomas(74%) [1]. LGFMS occur as a malignant, but often late metastasizing tumor in the proximal extremities and trunk. Sporadically they may be found in unusual locations, such as the retroperitoneum, head or the chest wall [2]. Histologically, they are described as bland spindle cell tumors with angulated nuclei, scant cytoplasm arranged in a whorled pattern with cells that are frequently immunoreactive for mucin. It is mostly treated with surgical excision with proper follow up in view of the possibility of metastasis which is seen most commonly in the lungs, pleura and chest wall [3,4]. We present a case of low grade fibromyxoid sarcoma of retroperitoneum with features clinically suggestive testicular malignancy.

A 52-year-old male came with complaints of abdominal mass for 6 months which rapidly progressed to accommodate the entire abdomen. He also had associated bilateral lower limb swelling. He has a history of absent right testis and also a history of right hernioplasty done 8 years prior. Radiological examination showed a well defined solid heterogeneously enhancing lesion with fatty areas. It extended anteriorly up to anterior abdominal wall with loss of fat planes. This showed its attachment to the previous operated suture line. Posteriorly, it compressed on the distal abdominal aorta and its branches. The mid segment of right external artery was encased by the lesion. There was associated compression of the sigmoid colon to the left and displacement of intestinal loops supero-laterally. Inferiorly, the mass extended to the right inguinal region. There was displacement of the prostate and bladder inferolaterally with loss of fat planes with the bladder. The right ureter was also displaced to the left side with associated compression of both ureters causing bilateral hydroureter with hydronephrosis (Figure 1(a) and (b)). The clinical presentation along with the radiological imaging was suggestive of a right testicular malignancy which created a dilemma for the further management and diagnosis. Testicular tumor markers were evaluated which only showed an LDH level of 536 IU/L. This suggested the possibility of a testicular seminoma. This was an additional factor that caused a disparity in the possible diagnosis as the radiological imaging directed towards a non seminomatous germ cell tumor (NSGCT) instead of a seminoma. At the same time, this could not completely rule out the possibility of a soft tissue sarcoma. The radiological imaging was taken into consideration not only for diagnostic purposes, but also to plan for the approach of excision of the tumor intraoperatively. The involvement of the surrounding structures and the vascular pedicles supplying the tumor from the external iliac artery was carefully reviewed to prepare for intraoperative findings as well. The patient underwent a bilateral DJ stenting in view of the hydronephrosis and hydroureter prior to the planned operation. Preoperatively, a debulking surgery was planned. Intraoperatively, there was a complete resection possible. The prior sutures in the right inguinal region were appreciated of the previous right inguinal hernioplasty, where the tumor was attached as well. The only difficulty found during the operation was at the point of approximation with the right external artery, which was where the feeding vessels were also identified. Prior to ligation of the vascular pedicle the distal pulsations were felt which was confirmed again after ligation and dissection of the tumor around the external iliac vessels. Once the entire tumor was resected it was identified to be originating from the posterior retroperitoneal surface of the bladder. The specimen was sent for histopathological examination. Post operative period was unremarkable. On gross examination, the specimen had a well-defined nodular surface, greyish white in colour. It was firm in consistency and the cut section showed fibrofatty tissue with areas of vascularity (Figure 2(a) and (b)). On histological examination, there were fusiform cells arranged loosely in a myxoid matrix. The cells had scanty cytoplasm with uniform elongated densely staining nuclei. Infrequent mitosis was seen with curvilinear vessels scattered within the tumor (Figure 3(a)). Immunohistochemical markers were tested which showed positivity to SMA (Figure 3(b)), CD34, MDM2, CDK4 and negativity to S-100 protein, MSA, DOG-1, caldeson, STAT-6, desmin and MUC-4. These features all directed towards a diagnosis of low grade myxofibrosarcoma. Post operatively, the DJ stents were removed and once patient was discharged. Follow up after 3 months has shown to be disease and symptom free. Further regular follow up after 6 months was advised for clinical and radiological follow up to rule out any recurrence or metastasis. Although the diagnosis pointed in favour of a testicular malignancy on clinical and radiological investigations, the final excision along with histopathological correlation helped in resolving this dilemma and provided the diagnosis of a low grade myxofibrosarcoma. 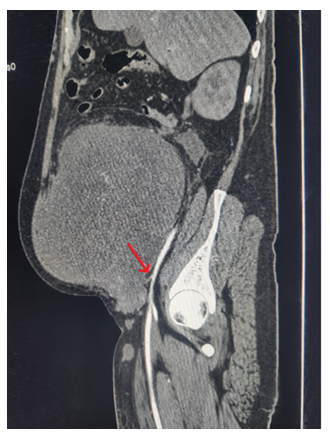 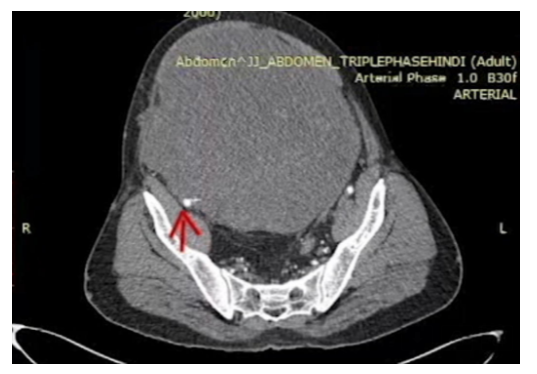 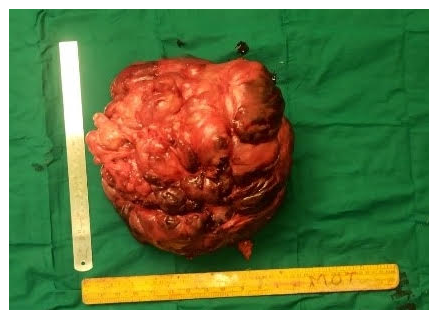 Figure 2a: gross specimen after its exicion from the retroperitoneun. It was seen to be a lobulated mass which was hard in consistency. 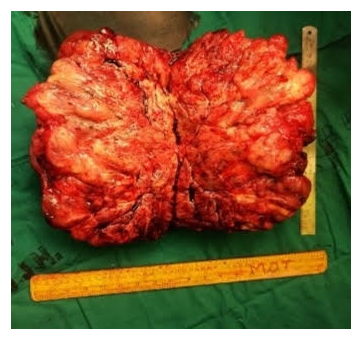 Figure 2b: Cut section of the specimen after its excision from the retroperitoneum. Fibrofatty tissue with high vascularity noted. 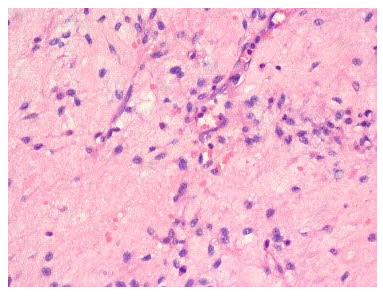 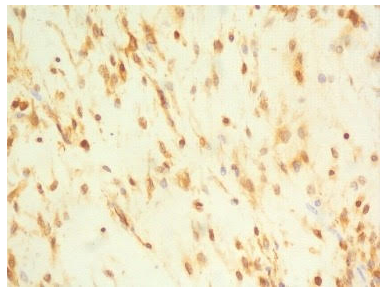 As seen in the present study, patients with LGFMS, present with abdominal lump. Similarities in its presentation with other intraabdominal tumors, such as intraabdominal testicular neoplasm in a case of undescended or absent testis, causes a clinical dilemma. Radiological imaging cannot help in finalising the diagnosis; however, it can help to map the vascularity of tumors, their infiltration or involvement of surrounding structures. This helps to plan the intraoperative procedure and management. Primary excision followed by histopathological examination confirms the diagnosis and governs the post operative treatment. Follow up every 6 months with clinical and radiological examination is advised to avoid any recurrences. Being a rare disease, further studies and understanding is required to plan a defined management and follow up protocol.