Background: Peroral endoscopic myotomy (POEM) is a minimally invasive procedure for treatment of achalasia. We analyze success, complications and learning curve in a consecutive series in our hospital.

Patients and Methods: Our retrospective analysis comprises all patients with achalasia, who were treated from 2015 until 2018 with POEM. Preoperative evaluation was done with history, high resolution manometry, EGD and video-cinematography. Reevaluation was performed six weeks after POEM with EGD and a history was taken. 43 patients were treated with POEM, 22 (52%) females, 21 (49%) males. The mean age was 55 (17-84) years. Six patients (14%) had been treated with injection of botulinum toxin, 12 patients (28%) with balloon dilatation before. According to Chicago classification 30 patients (85.7%) suffered from type II, four patients (11%) from type III and two patients (6%) from type I. The mean length of myotomy was 8.5±0.5cm and was extended 2cm beyond the gastroesophageal junction.

Results: In 36 procedures with complete data the initial success rate was 92%, defined as Eckardt Score ≤3. Three patients (8%) suffered from recurrent symptoms later. Eckardt Score was reduced from 7.0±0.3 to 1.0±0.2 after POEM (p<0,0001). We observed five complications (11%), which resolved with conservative treatment. Sufficient information on postinterventional reflux disease was only available from 24 patients: seven patients (29%) had a new erosive esophagitis, two patients reported typical symptoms without esophagitis. The complication rate decreased within four years from 25% to 0. A similar phenomenon was observed with recurrencies (learning curve).

Conclusion: Peroral endoscopic myotomy is an effective and safe method for the treatment of achalasia. The learning curve is relatively flat.

Peroral endoscopic myotomy is a minimally invasive procedure for the treatment of achalasia. We analyzed the outcome of POEM at Ordensklinikum Linz and, based on our experience, evaluated the safety and efficacy of the method.

This retrospective data analysis included all achalasia patients treated with POEM from January 2015 to August 2018 at Ordensklinikum Linz. The preoperative evaluation included a high-resolution manometry (Chicago classification), EGD (esophagogastroduodenoscopy), video cinematography, and an assessment of the patients’ clinical symptoms (Eckardt score) [1,2]. We performed POEM in endotracheal anesthesia with CO2 insufflation. After submucosal injection, a mucosal incision was performed about 12cm above the cardia, and a submucosal tunnel was created beyond the cardia into the proximal portion of the stomach. The inner annular muscle was then transected from 2cm distal to the cardia in proximal direction, to about 3cm below the mucosal incision. The longitudinal muscles were preserved. Finally, the entrance of the tunnel was closed with clips. Follow-up investigations at 6 weeks after POEM consisted of a control gastroscopy and an assessment of clinical symptoms.

Forty-three consecutive patients treated with POEM were evaluated; 22 (51.8%) were women and 21 (48.8%) were men. The patients’ mean age was 55.1 years (range, 17 to 84 years). Six patients (13.9%) had undergone previous treatment with botulinum toxin injections, and 12 patients (27.9%) with pneumatic balloon dilatation. In accordance with the Chicago classification, 30 patients (85.7%) had type II achalasia, 4 (11.4%) had type III achalasia, and 2 patients (5.7%) had type I achalasia. The mean myotomy length was 8.5 cm ± 0.5, and extended to 2 cm beyond the gastroesophageal junction. Of 36 interventions (including follow-up investigations) that could be evaluated, initial treatment success (defined as an Eckardt score < 3) was achieved in 33 cases (91.7%). Three patients developed recurrent disease. Overall, the Eckardt score was reduced significantly from 7.0 ± 0.3 to 1.0 ± 0.2 (p<0.0001) post-POEM. We observed 5 complications (11.4%; arterial bleeding in 2 patients, pneumothorax in 2 patients, and pneumonia in 1 patient), all of which could be managed by conservative treatment. With regard to de novo gastroesophageal reflux disease postoperatively, we were able to evaluate 24 datasets. Nine patients (37.5%) had erosive esophagitis or symptomatic reflux disease. Grade A (20.8%) and grade B (8.3%) erosive esophagitis according to the Los Angeles classification were diagnosed by endoscopy in 7 patients. A further 2 patients reported typical symptoms of reflux disease (NERD).

In our analysis, peroral endoscopic myotomy was associated with an initial treatment success rate of 91.7% (n=33). Treatment success was defined as an Eckardt score of ≤3 at 6 weeks post-POEM. The procedure resulted in a significant reduction of the Eckardt score (7.0 ± 0.3 vs. 1.0 ± 0.2; p<0.0001). Disease recurrence was observed in 3 patients (8.3%). In a prospective study comprising 500 patients, Inoue et al. reported a treatment success rate of >90% and a reduction of the mean ES from 6.0 to 1.0. In a recent randomized controlled study, the authors registered initial success rates of 92% [3]. In two randomized controlled studies, the authors reported initial treatment success rates of about 92% [4,5]. We registered a complication rate of 11.6%. Corresponding figures 1-5 and tables 1,2 in recent studies varied from 0% to 30% because we lack a consensus regarding the definition of complications. The study most similar to ours is a prospective investigation of 500 patients, conducted by Inoue et al., who registered a complication rate of 3.2%. A retrospective analysis of 1300 patients treated with POEM in Japan reported a complication rate of 3.7% [3-5]. In our study, complication rates increased with age (46-60 years 10% vs. 61-75 years 15.4% vs. 76-90 years 28.6%). Younger patients (<45 years) had no complications. This is attributed to the greater vulnerability of tissue and the generally reduced regenerative capacity with advancing age. The discrepancy between our complication rates and those reported earlier is best explained by the small sample size, missing data sets due to the retrospective nature of the study, and the learning curve related to the complexity of the method. The lattermost factor is confirmed by complication rates in the individual years of treatment. Complication rates fell successively from 25% and 20% in the first two years to 8.3% in 2017 and 0% in 2018. The falling complication rates over time may be viewed as a manifestation of the learning curve.

In a prospective study of 40 patients treated with POEM, procedure time and the incidence of inadvertent mucosotomy were investigated in order to define a learning curve. Mastery of the operative technique in POEM has been evidenced by a decrease in both parameters; these remained constant in endoscopists who had performed more than 20 procedures [6,7]. In a similar prospective study comprising 93 patients, the procedure time plateaued and mastery of technique was achieved after 60 POEMs [8]. Gastroesophageal reflux diseases after the procedure was observed in 37.5% of cases, defined as the endoscopic diagnosis of erosive reflux disease or the presence of typical clinical symptoms. The body of published data concerning the development of reflux disease post-POEM is very diverse. In a recent systematic review, 1542 POEMs were analyzed and reflux esophagitis was established in 35.3% of cases. In the previously mentioned multicenter study from Japan comprising 1300 interventions, erosive reflux esophagitis was observed in 63% of cases and typical reflux symptoms in 15% [3,9]. In summary, our results concur with those of large randomized studies in regard of therapy response (reduction of the Eckardt score) and the development of reflux. This may be regarded as a quality characteristic. Complication rates were in keeping with international averages, with due regard to a potential learning curve for a complex intervention. The advantages and disadvantages of POEM compared to other methods are addressed in the following. In a randomized controlled study published in 2019, Ponds et al. compared POEM and pneumatic balloon dilatation (PBD) in regard of treatment success (defined as an Eckardt score ≤3 and the absence of serious complications or the need for renewed treatment during the two-year follow-up period). Of 126 patients, 63 received POEM and 63 were treated with PBD. The long-term success of treatment was 92% in the POEM group, compared to 54% in the PBD group. The latter group had 2 serious complications, including an esophageal perforation. No complications were observed in the POEM group. The study confirmed the significant superiority of POEM compared to PBD in regard of safety and efficacy [5]. In 2018 Schlottmann et al. published a review in which the outcome of POEM was compared with that of laparoscopic Heller myotomy (LHM). After 12 months, the symptoms of dysphagia were improved in 93.5% of patients treated with POEM, whereas the same was noted in 91.0% of those treated with LHM. After 24 months, clinical symptoms were improved in 92.7% of the POEM group versus 90.0% of the LHM group. The results lead to the conclusion that POEM is at least as effective as LHM [10]. In a meta-analysis published in 2018, Repici et al. compared LHM and POEM in regard of postoperative reflux symptoms. Of 1542 patients treated with POEM, 19.0% had symptoms of reflux. In contrast, the reflux rate in LHM patients was markedly lower (8.8%). Likewise, the rates of postoperative reflux esophagitis were markedly higher after POEM (29.4%) than after LHM (7.6%) [9]. One potential advantage of LHM with fundoplication compared to POEM is the lower probability of postoperative reflux disease. Long-term data from randomized controlled trials will be needed to evaluate POEM further and compare LHM with POEM. 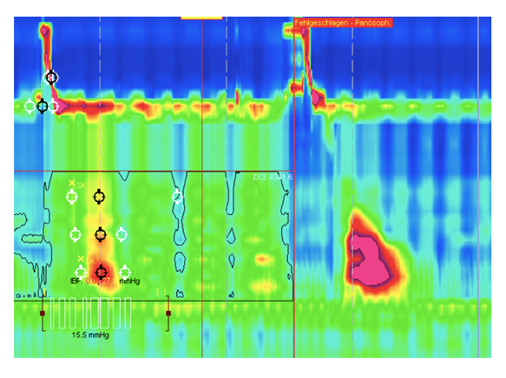 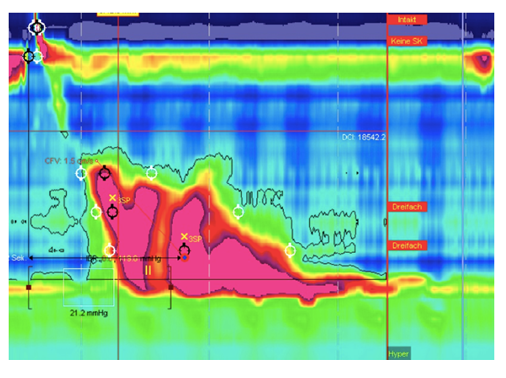 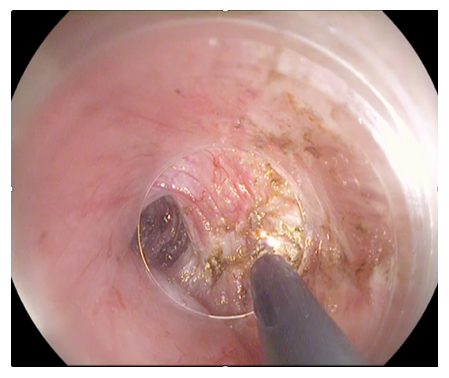 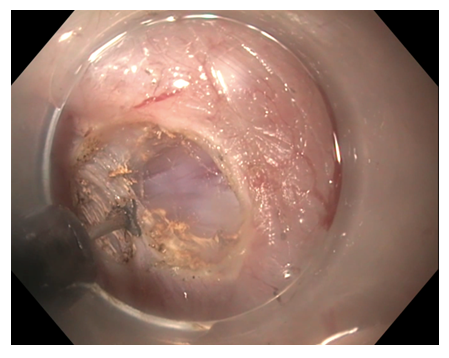 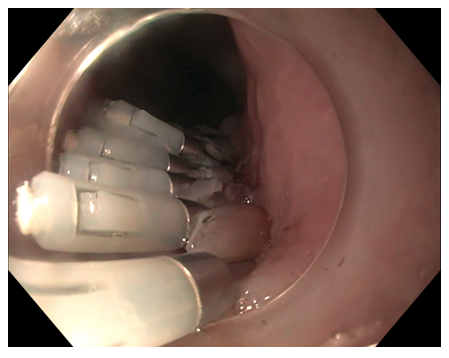 Figure 5: Closure of the myotomy tunnel with clips

In our setting, peroral endoscopic myotomy proved to be an effective and safe method for the treatment of achalasia.