A facial palsy is a cause of an aesthetical and functional problem. An operative technique used the most commonly in particular cases is a hypoglossal-facial anastomosis. However, a function of a tongue in these patients is usually not entirely preserved. Authors sought the solution for that neurological deficit, exploring the anatomical conditions to perform the anastomosis between the facial and the suboccipital nerve.

The anastomosis was possible in every case. The measurements were divided into 3 groups. The first group are three distances describing the extent of the antromastoidectomy: superior - 22±0.7 mm, posterior - 21±2.8 mm and anterior margin of procedure - 28±4.2 mm. The second group were the topographical distances crucial for identification of the neural structures: between the styloid process and the tip of mastoid process - 34±0.6 mm, from the stylomastoid foramen to the tip of mastoid process - 18±0.3 mm, from stylomastoid foramen to the suboccipital nerve - 34±0.6 mm. The last one were diameters of the nerves: suboccipital - 2.5±0.7 mm and facial nerve - 2.5±0.7 mm.

The study has revealed that it is possible to perform suboccipital-facial anastomosis. Nevertheless, the functional assessment has to be investigated in further studies.

Surgical treatment of vestibular schwannomas (VS) could be followed by certain complications. One of them is a facial nerve (FN) paresis or palsy. In spite of application of a microsurgical techniques and an intraoperative neurophysiological monitoring, the functional outcome in the group with preserved nerve continuity is unsatisfactory in 19-50% [1,2]. Denervation of the area supplied with this nerve leads not only to movement impairment, like difficulties with eyelid closure and facial expression, but it is also a psychological discomfort [3]. There were proposed multiple ways to manage FN palsy after the VS surgery. Beginning with the static procedures, known widely in the plastic surgery, to dynamic reanimation surgeries: direct end-to-end suture, reconstruction with cable grafting and extratemporal crossover anastomosis. When the direct end-to-end anastomosis or use of interposition graft could not be performed, the crossover anastomosis should be employed [4,5]. There are multiple cranial and spinal nerves which were considered as axons donors. Among them, the hypoglossal-facial anastomosis (HFA) with its modifications is the most common choice in the treatment of these patients [2,6,7]. In classic procedure the completely transected hypoglossal nerve (HN) was used as a donor of motor fibers. However, the tongue atrophy and caused by it articulation and mastication disorders could severely interfere with normal day life activity [8]. Over past years many variations of the classic procedure were described in case to spare the tongue mobility. The most important seems to be the longitudinal division of HN [9], ‘side-to-end’ technique with transposition graft described by May [10], direct ‘end-to-side’ with transposition of the mastoid part of facial nerve (Darrouzet technique) [11] or described by Martins procedure hemihypoglossal-facial anastomosis (HHFA), where the intramastoid part of the FN is connected ‘end-to-end’ to the split HN [8]. Independently from the used technique, procedures are still related with risk of discrete or mild tongue atrophy which amounts in 30-57% [8,12]. Another disadvantage of HHFA is insufficient amount of fibers in the half of HN to provide the complete FN reinnervation [8]. Additionally, post-incision scar is placed on well visible region of head and neck. It also should be taken into consideration in the context of aesthetical results. All above mentioned complications related to HN injury may be avoided using other nerve. In searching for alternative nervous fibers donor in the region adjacent to the stylomastoid foramen, anastomosis with suboccipital nerve (SN) was proposed as potential solution. Mainly, because of the pure motor character of fibers and minor neurological complications caused by The anatomical relation and diameter of both nerves were taken under consideration, as well as the innervation area supplied by the SN. In our study we would like to explore anatomical conditions determining possibility to perform such procedure and to elaborate technique of suboccipital-facial anastomosis (SFA) as a treatment proposition in the proximal facial palsy.

Study was performed on 5 cadavers, which were not supposed to have any middle ear pathology and surgery performed in the area of interest. Procedure was performed in both sides, which gives the number of 10 anastomosis. Typical three quarter prone position was used in every case. Microsurgical techniques of dissection were employed. All measurements were performed using standard caliper. Detailed description of procedure is presented in the Results section. Cadavers come from a voluntary donation program and are part of the existing collection of the Department of Clinical and Descriptive Anatomy, Medical University of Warsaw, Poland. The research was conducted according with the Polish Death and Funeral Act and with relevant guidelines and regulations. The Institutional Ethics Committee was informed about the ongoing study, and the Committee stated no need for its approval.

Incision starts in the retroauricular area, 0.5 cm inferior to the mastoid tip. It is prolonged to the suprameatal spine (spine of Henle). Incision is linear, lightly curved posteriorly (Figure 1). There is no need to perform the subcutaneous or pericranial flap in separate layer. Incision length of 5 cm is enough to evaluate the area of mastoid process. The tip of mastoid process and insertion of the sternocleidomastoid muscle should be visible in the inferior aspect of exposure, cartilage of external acoustic meatus in the anterior part, suprameatal spine superiorly to the external acoustic meatus. The mastoidectomy is performed in the triangle, which is limited by: the tip of mastoid process, the suprameatal spine and area where sigmoid sinus projects on the cranium (Figure 2). Average length of drilling necessary to expose the facial nerve properly is 28±4.2 mm in the anterior, 22±0.7 mm for the superior and 21±2.8 mm for posterior aspect of mastoidectomy. Compact bone is removed using the cutting burr and removal is performed until the antrum is visualized. From that moment procedure should be performed using the intraoperative microscope. During the drilling, there is no need to skeletonize the sigmoid sinus and the dura of middle fossa. There are several ways, which could be used for purposes of FN identification. The first one is depended on the location of the short crus of incus, which points the tympanic part of the canal. To visualize the incus, the drilling should be continued through the antrum, removing the cancellous bone covering the external acoustic meatus. The first structure after the opening of tympanic cavity will be the short crus of the incus pointing the prominence of FN canal. The second way to found the seventh cranial nerve is a relationship between its canal and prominence of the lateral semicircular canal. Beneath it, FN courses from the tympanic into the mastoid part of its canal. Third way is drilling through the tip of the mastoid process into anteromedial direction to found the nerve near the stylomastoid foramen. (Figure 3). It could be found approximately 18±0.3 mm from the tip of mastoid process. The diamond drill is used for skeletonization of the nerve canal. Thin layer of bone is left on its course, which is removed using the Penfield’s dissector. After that step, stylomastoid foramen is widened and tip of the mastoid process is removed. Thanks to such proceeding, the FN transposition will be much easier and less traumatizing for the nerve. After that, the second part of the procedure could be performed. 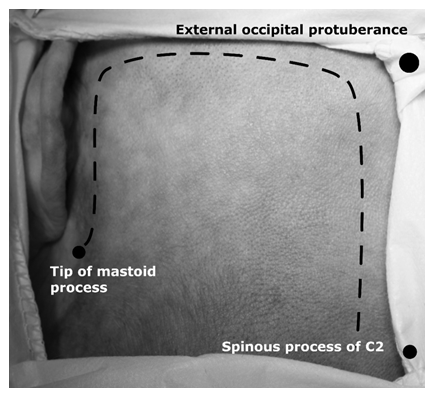 Figure 1: Skin incision, left side. Note the most important topographical cranial points, which should be palpated before surgery. 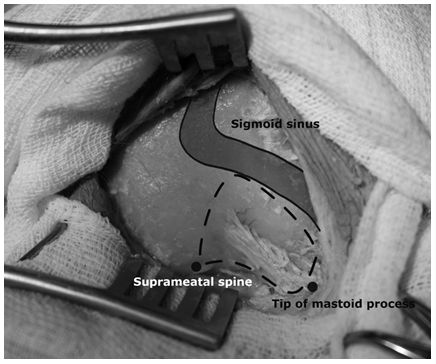 Figure 2: The area of antromastoidectomy 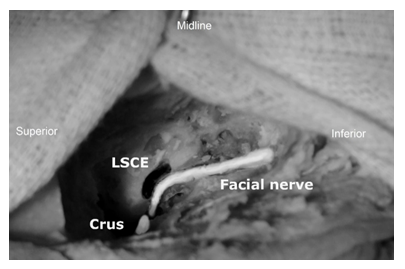 The incision used for mastoidectomy ends on the level of external occipital protuberance (Figure 1). Incision is prolonged horizontally, parallel to superior nuchal line. The incision should be continued inferiorly in the paramedian line 2 cm laterally from the median line, parallel to the nuchal ligament, ending on the C2 level. The aim of the procedure is SN, which is found in the suboccipital triangle limited by obliquus capitis inferior and superior muscles and rectus capitis posterior major muscle. The superficial nuchal muscles - trapezius, splenius capitis and semispinalis capitis (Figure 4) are cut in one layer and suboccipital triangle is exposed. During separation of the last muscle - semispinalis, a great attention is required. This is caused by the fact, that SN innervates partially the semispinalis muscle. A small branch is arising from the main nerve trunk and penetrates the deeper surface of the muscle. That branch should be cut in the controlled fashion using the scissors, otherwise the main trunk could be ruptured. The suboccipital triangle is exposed (Figure 5). From that point, seeking for the SN in any case should be performed using the intraoperative microscope. Dissection in that area does not require vertebral artery mobilization and C1 laminectomy. However, vertebral artery should be separated from its sulcus on the posterior arch of atlas. From that point, course of the vertebral artery and venous plexus is evaluated. When SN is exposed, it is cut using the scalpel blade in the place, where it divides into muscular branches. The distance from that point to the stylomastoid foramen is in average 34±1.2 mm. Actually, it is a crucial measurement for the procedure, because this is the approximate length of the FN stump needed to be cut from the temporal bone. After that, the facial nerve should be located near its exit from the cranial base. The best way to achieve that, is a palpation of the styloid process, which should be searched behind the posterior belly of digastric muscle. That relevant in topography bony landmark is found 34±1.2 mm from the tip of mastoid process. It is important, because the stylomastoid foramen is located posteriorly from it and could be found 18±0.6 mm from the tip of mastoid process. That area is explored, facial nerve is dissected. After that, intramastoid part of nerve is cut in its canal in the length of 30±0.5 mm from the foramen. In the ending, the posterior belly of digastric muscle is cut and nerve is transposited near to the SN.

The surfaces of the nerves stumps before suturing should be properly prepared. Transections should be performed using scalpel blade in both cases. Diameter of transected FN was 2.5±0.71 mm and 2.5 ±0.71 mm for SN. After that, anastomosis is performed (Figure 6). Fine 8-0 permanent monofilament suture is used. 2-3 sutures through the epineurium and nerves fascicles are performed. Anastomosis in the ending should not be performed under the tension.

The posterior belly of digastric muscle and superficial nuchal muscles should be sutured. The antromastoidectomy area should be closed typically, using the abdomen fat placed with the fibrin glue. Layers are sutured in the typical, multilayer fashion. 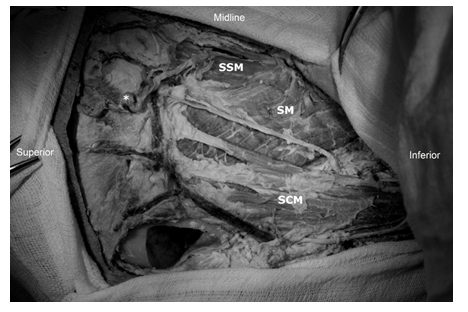 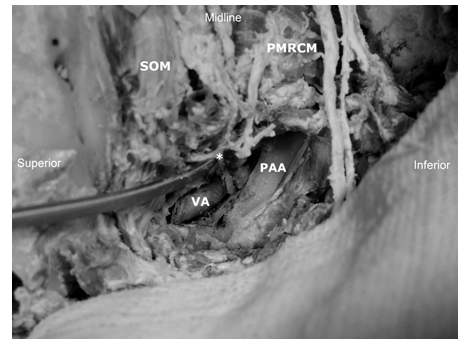 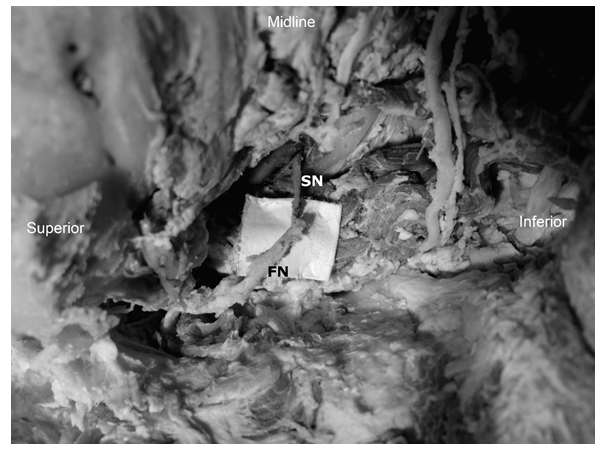 Our study focus only on the anatomical conditions of such procedure. Basing on it, we couldn’t provide any results on the functional outcome. Further experimental studies, starting on the animal model, should be provided.

The study has revealed that anatomical conditions allows to perform SFA. That technique could provide motor supply for the facial nerve, at the same time sparing the tongue mobility. Nevertheless, the functional outcome in comparison to the HFA or HHFA has to be investigated in further studies.