Superior mesenteric artery syndrome (SMAS) is an uncommon cause of duodenal obstruction due to the extrinsic compression of the third part of the duodenum by the superior mesenteric artery (SMA) as it passes anterior to it. We present a case of a 70-year old lady with abdominal pain, postprandial vomiting and decreased oral intake following laparoscopic low anterior resection with endoscopic and radiological findings suggesting SMAS. The cause was the traction on the transverse mesocolon and the middle colic artery to place the transverse colon in the deep pelvis. This, in turn, has lead to traction and flattening of the SMA against the aorta causing SMAS. The patient was successfully managed conservatively with enteral feeding and surgery was avoided.

Superior mesenteric artery syndrome (SMAS) is an uncommon cause of duodenal obstruction due to the extrinsic compression of the third part of the duodenum by the superior mesenteric artery (SMA) as it passes anterior to it. It is postulated that a pad of mesenteric fat around the origin of the SMA protects the duodenum against compression. Although having a low BMI is a predisposing factor, other additional factors are necessary to develop SMAS. One precipitating factor is rapid weight loss that leads to loss in retroperitoneal fat. This reduces the mesenteric fat pad around the SMA leading to narrowing of the angle between the aorta and SMA causing SMAS [1]. Other precipitating factors include increased lordosis and external compression and SMAS has been reported following trauma, spinal corrective surgery and body casting [1, 2]. SMAS has been reported following ileal pouch anal anastomosis [3]. However, to our best knowledge, there are no reports of SMAS following low anterior resection. We describe a case of SMAS that developed in a patient who had laparoscopic low anterior resection for a left colon cancer.

A 70-year old Asian woman was initially seen with a metachronous left colon adenocarcinoma following a previous anterior resection for a sigmoid cancer thirteen years earlier. A laparoscopic low anterior resection was performed where the rectum was resected distal to the previous anastomosis with a transverse colon anastomosis to the rectum. On postoperative day 13, she presented to the emergency department with abdominal pain, postprandial vomiting and decreased oral intake. Her weight was 50 kg and her body mass index (BMI) was 18.7 kg/m2. On examination, she was dehydrated. Abdomen was mildly distended with epigastric tenderness. She was hyponatraemic (Na 118 mmol/L), hypokalaemic (K 2.9 mmol/L) and hypochloraemic (Cl 77 mmol/L). Urea and creatinine were normal (6.2 mmol/L, and 56 μmol/L). A CT scan showed the third part of the duodenum was extrinsically compressed between the aorta and the superior mesenteric vessels, causing a dilatation of the second part of the duodenum. Aortomesenteric angle was 12°, and the distance was 4mm. Upper gastrointestinal endoscopy showed a large amount of bile in the stomach, dilated duodenum and a tight extrinsic constriction of the third part of the duodenum. There was no access to the jejunum. Balloon-assisted enteroscopy was done to pass the scope into the jejunum and insert a nasojejunal feeding tube. The position of the feeding tube in the jejunum was confirmed with a supine abdominal x-ray and feeding was commenced via the nasojejunal tube. She slowly improved following nasojajunal feeding and was discharge home. Nasojejunal tube was removed week 4 following resolution of the duodenal obstruction and patient tolerating diet. 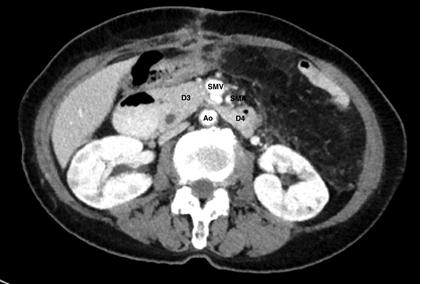 Figure 1: Aortomesenteric compression of D3/D4 in a patient with SMAS. 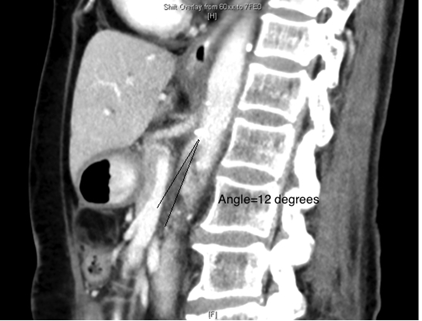 Figure 2: Aortomesenteric angle in a patient with SMAS.

Several surgical procedures have been described for SMAS patients, including gastrojejunostomy, duodenojejunostomy, and the division of the ligament of Treitz [6]. However, conservative management should be the first choice aiming at feeding the patient to gain weight, restore retroperitoneal fat and increase the aortomesenteric angle. This can be achieved by enteral feed through a nasojejunal feeding tube or total parenteral nutrition. The reported success rate of medical management is 71% with a recurrence rate of 15% [6].

In summary, we present a case that illustrates SMAS can occur following low anterior resection that has resulted from traction on the transverse colon to reach the deep pelvis causing stretching and flattening of mesocolon, middle colic vessels, and the SMA reducing the aortomesenteric angle. This was successfully managed conservatively with enteral feeding and surgery was avoided.