The Role of Exhaled Nitric Oxide Fraction in Sarcoidosis Patients

Nitric oxide is a molecule that has important roles in various biological processes such as apoptosis, angiogenesis and endothelial permeability and therefore its disorder plays a role in the pathogenesis of various disorders. We aimed to investigate fractional exhaled nitric oxide values in sarcoidosis, a multi-systemic non-caseified granulomatous disease that commonly affects all organs, especially the pulmonary system. A total of 107 individuals, including 54 sarcoidosis patients and 53 healthy controls were included in this study. Data were analyzed retrospectively. Gender, age, body mass index, exhaled nitric oxide fraction values, respiratory function parameters, diagnostic methods and additional disease states were recorded.

The incidence of sarcoidosis varies according to geographic region, race and gender. It has the highest prevalence in the world with 50-60 / 100,000 in Scandinavian countries. In the United States, the prevalence of the disease is 10-40 / 100,000, 20-64 / 100,000 in northern European countries and 1.4 / 100,000 in Spain and Japan. It is more common in women than men. Sarcoidosis with two peaks between the ages of 25-35 and 45-65 [1]. Sarcoidosis is a systemic disease of unknown etiology characterized by non-caseating granulomas that can involve all organs, especially lung and mediastinal lymph nodes [2].

Although the immunopathogenesis of sarcoidosis is not fully understood, it has been shown that it is similar to other granulomatous diseases such as chronic beryllium disease. That is, some antigens enter the host and are phagocytosed by antigen presenting cells (APC), macrophages or dendritic cells. APCs process the antigen and then present it to T cell receptors on T lymphocytes from the CD41 class via human leukocyte antigen (HLA) class II molecules [3]. Giant multinucleated cells formed by epithelioid histiocytes and CD41 T lymphocytes are responsible for granuloma formation in sarcoidosis. Contributes to the formation of granulomas in fibroblasts, CD81 T lymphocytes, regulatory T cells and B lymphocytes [3].

The diagnosis is made in the presence of clinical, radiological findings and histological detection of non-caseating granulomas after excluding other granulomas and factors causing local reactions [4]. Symptoms may range from systemic symptoms such as shortness of breath, cough, chest pain, low-grade fever, fatigue, weight loss and night sweats to Lofgren's Syndrome accompanied by bilateral hilar lymphadenopathy and erythema nodosum [5]. Pulmonary sarcoidosis can be examined radiologically in five stages. Stage 0. Chest X-ray normal, Stage 1. Only hilar and mediastinal lymphadenopathy, Stage 2. Lymphadenopathy (LAP) and pulmonary infiltration, Stage 3. Pulmonary infiltration alone, Stage 4. Pulmonary fibrosis. Staging provides information about the prognosis of the disease[6] Pulmonary involvement is not observed in Stage 0 and Stage 1 and spontaneous remission is seen in most of them. Symptomatic treatment is given. Steroids are used in the main treatment of sarcoidosis. Immunosuppressive therapy and anti-Tumor Necrosis Factor (TNF) agents can also be used in cases with severe clinical picture [7].

(NOS) in the human body. It is an unstable molecule with an average life of as short as 3-5 seconds. Due to its lipophilic property, it can easily pass through the membranes. When administered by inhalation, it easily crosses the alveolar epithelial cell barrier, stimulates the guanilyl cyclase enzyme and causes relaxation and vascular dilatation in smooth muscle cells via cyclic guanosine monophosphate (cGMP) [11]. In addition, inhaled NO may show pro-inflammatory or anti-inflammatory properties on the pulmonary system [12]. In patients with lung damage, NO can cause vasodilation in areas of the lung that are not well ventilated, thus increasing ventilation-perfusion mismatch and causing systemic arterial hypoxemia. Depletion of NO can lead to vasoconstriction, impaired tissue perfusion and inflammation [13].

In granulomatous lung diseases, an increase was observed in the amount of inducible NO synthase detected in the lung tissue [14]. An increase in FeNO concentration is observed in pathologies in which sarcoidosis and exogenous allergic alveolitis and idiopathic pulmonary fibrosis develop [15]. Also, smoking affects NO metabolism. Smokers have lower exhaled NO values than non-smokers [16].

The study was conducted in accordance with good clinical practice and the Declaration of Helsinki. The study was approved by the ethics committee of Afyonkarahisar Health Sciences University Medical Faculty Hospital (No: 2011- KAEK-2 2020/10).

Continuous variables were expressed as median (minimum-maximum) if not normally distributed, and as mean ± standard deviation if normally distributed. Categorical variables were expressed as number and percentage (n (%)). Chi square test was used to compare the rates of the groups. Multiple groups (> 2) were compared with the Kruskall-Wallis test. When a statistically significant difference was detected with the Kruskall-Wallis test, Bonferroni-corrected Mann-Whitney U-test was used for post hoc analysis. Statistical significance level was accepted as p <0.05. "Reciever Operator Characteristics Curve" (ROC) analysis method was used to evaluate the specificity and sensitivity of the obtained results.

Other: liver and neurological system involvement, Comorbid disease: Chronic diseases such as diabetes mellitus, hypertension and cardiovascular diseases. When respiratory function parameters such as % FEV1,

FeNO values were compared between sarcoidosis patients and control group. FeNO was measured as 17.85 ± 10.72 ppb (parts per bilion) in sarcoidosis patients, while it was measured as 10.69 ± 6.05 ppb in the control group and was statistically significant (p <0.001). When the respiratory function parameters and FeNO values were compared, no correlation was observed between them.

Table 3: Comparison of sarcoidosis patients and the control group.

When the results found in sarcoidosis patients were evaluated by ROC (Reciever Operator Characteristics Curve) analysis, it was found that the sensitivity of FeNO in sarcoidosis was 64.8%, its specificity was 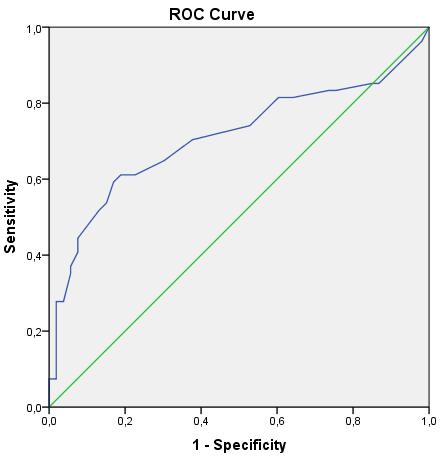 Graphic 1: The specificity and sensitivity of exhaled nitric oxide fraction in sarcoidosis.

Some studies have shown that it may be useful to evaluate FeNO as a leading marker in proximal airway and / or distal airway inflammation [17]. It has also been found that the amount of NO in exhaled air increases with the increase of eosinophils in sputum in airway inflammation [16]. This suggests that NO has a role in airway inflammation. In a study by Rutgers et al., They found that NO levels in exhaled air and supernatant NO2 / NO3 levels in healthy smokers were lower than healthy non-smokers [16]. In our study, we did not include smoking patients in order not to affect FeNO values.

concentration increased in the breath of patients, but no correlation was shown with disease activity in sarcoidosis [20]. Tiev et al. Similar results were obtained by [21].

In our study, we found that the FeNO value increased significantly in sarcoidosis patients compared to the healthy control group. We found no significant difference in FeNO values between stages in sarcoidosis patients. A negative correlation was observed between the high concentration of alveolar NO and inspiratory vital capacity in the market by Schildge [22]. In our study, there was no correlation between breathing and FeNO.

Diseases in which lung parenchyma is affected, bronchoalveolar inflammation states and sarcoidosis cause changes in pulmonary NO metabolism. This is followed by an increase in FeNO levels. FeNO analysis can be used as a marker in detecting these processes.

No financial support was received for study.