Combination of right sided aorta and aberrant left subclavian retro-esophageal artery originates from a Kommerell’s diverticulum is a rare entity and its treatment remains complex. Here we reported a case of a 58 years-old woman presenting dysphagia to share technical aspects and challenges of endovascular management.

A 58 years-old woman was admitted for dysphagia for about one year and a half and permanent retro-sternal pain associated with a weight loss of 25kg. A chest computerized tomography angiography (CTA) showed a right-sided 25 mm aortic arch with an aberrant left subclavian retro-esophageal artery, originates from a 17 mm (orificial diameter) Kommerell’s diverticulum (Figure 1A, B) and hypoplasia of left vertebral artery. Distal aorta was normal. Lymphangio-MRI showed that the thoracic duct was at the left side of esophagus (Figure 1C). Consent from the patient was obtained.

A left subclavian to carotid transposition was first performed. Despite proximal left subclavian artery transection and ligature, persistent dysphagia led us to implant 3 months later, in a second step, a 28-28-10 thoracic endoprosthesis GORE (DEL, USA), under ventricular fibrillation [1] in a hybrid operative room, leading to exclusion of the diverticulum. Endograft was post-plastied with an aortic balloon after placement. At day one, back pain occurred. A chest CTA showed that endoprosthesis had moved backward and diverticulum was still permeable with type IA endoleak (Figure 1D). A new 28-28-10 endoprosthesis was implanted upstream the first, excluding the diverticulum. Symptoms disappeared. At 3 months, dysphagia disappeared, and CTA showed a complete retraction of the diverticulum (Figure 2). 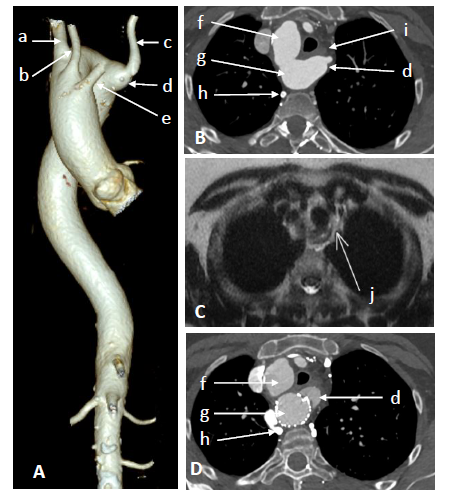 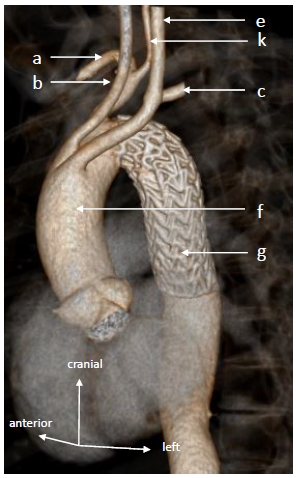 During aortic arch development, the persistence of the right aortic arch, instead of the left one, lead to definitive right sided aortic arch [2], classified by Edwards [3]. Kommerell’s diverticulum was first described in 1936, as a diverticulum of the descending thoracic aorta, giving birth to an aberrant right subclavian artery. Position and anatomy of lymph pathways are unknown in case of such complex vascular variation. We proposed preoperative thoracic duct imaging using lymphangio-MRI, to localize thoracic duct and limit the risk of postoperative lymphatic leak. Atherosclerotic changes of the vessels may lead to rupture of compression of surrounding structures, responsible for dysphagia, dyspnea, cough, chest pain, recurrent pneumonia [4].

Mini-invasive hybrid approaches were developed to treat aortic arch lesions, associated with supra aortic debranching [5]. However, it was exceptionally performed in case of Kommerell’s diverticulum associated to right-sided aortic arch, due to the rarity of this condition [6]. Technical aspects and challenges of endovascular management should be shared, knowing that we experienced backward movement of the endoprosthesis, as previously described [6].

1) Debranching alone could sometimes eradicate symptoms [7]. 2) Hybrid operative room with 3-dimensional reconstruction offers accurate visualization of the diverticulum. 3) In case of right aortic arch with narrow angle, endoprosthesis should be conformable with orientable proximal segment, for a better congruence. 4) For precise endoprosthesis landing, we recommend right ventricle overstimulation [1]. 5) Be aware of symptoms recurrence that could reveal a leak due to endoprosthesis migration and may require another endovascular treatment.

Planning hybrid treatment of dysphagia due to Kommerell’s diverticulum should include CTA and evoke the interest of lymphangio-MRI. Complex aortic disease endovascular treatment should be considered in a hybrid operative room, under ventricular fibrillation with appropriate endoprosthesis.

Authors have no conflicts of interest to declare.