Alcohol has been a well-known cardiotoxin for a long time now. Alcohol use (a leading cause of preventable death) causes >95,000 death/year or 261 deaths/day in the US with an average of 29 life-year lost, according to the Center for Disease Control and Prevention (CDC). Alcohol dependency is seen in at least 25% of hospitalized patients. EKG changes associated with alcoholic-dilated cardiomyopathy are many and often non-specific. It is easy not to evaluate otherwise young and asymptomatic alcoholics coming with alcohol withdrawal symptoms for cardiomyopathy. This report documents ECG findings of cerebral T waves, in a young, otherwise healthy alcoholic patient coming in for the treatment of alcohol withdrawal seizures, who later got diagnosed with alcoholic-dilated cardiomyopathy. It is of paramount importance to pay close attention to EKG changes in young alcoholic patients as delay in diagnosis of alcoholic-dilated cardiomyopathy is lethal and can often cause irreversible myocyte damage.

Cerebral T waves, often an indicator of the cerebral-cardiac syndrome (CCS), are defined as deep inverted T waves accompanied with prolonged QTc interval on electrocardiogram (ECG) [1, 2]. These changes are often seen in cases of cerebrovascular accident, such as subarachnoid hemorrhage, cerebral hemorrhage, or CVA, possibly due to changes in the hemodynamic system and autonomic nervous system [2]. However such an electrocardiographic changes are also seen in alcoholic-dilated cardiomyopathy [3]. Such an ECG changes in alcoholics are primarily due to electrolyte imbalance, hypoglycemia, or hypothermia [4]. Here we present a case of a young alcoholic male presenting with alcohol withdrawal seizures, showing cerebral T waves on ECG and later on diagnosed with cardiomyopathy on echocardiogram without cerebrovascular event.

A systematic review of medical literature with the keywords “alcohol,” “alcoholic cardiomyopathy,” “EKG changes in alcoholics,” “cerebral T waves” was performed on, PubMed, Google Scholar, and Science Direct databases. Articles that included definition, pathophysiology, mechanism of action, and etiology were identified. All types of articles, including reviews (narrative and systematic), meta-analysis, literature review, randomized controlled trials (RCTs), case-control cohorts, case series, and case reports were screened for relevant content. Out of many articles found, 14 relevant articles were used in this paper in addition to data obtained from the CDC/WHO website. Pertinent information was summarized and organized for ease of understanding.

Our patient was a 41-year-old African-American male with a BMI of 18.1 kg/m2 and medical history significant for long-standing hypertension and alcohol abuse. The patient had been drinking three big cups of vodka a day for many years, and lately, even more. Ultimately he decided to quit and went to an alcohol rehabilitation center for help. However, the same night of admission, the patient started experiencing mild abdominal discomfort along with nausea and non-bloody vomiting. The next day, abdominal discomfort continued to worsen, and he also experienced three episodes of witnessed seizures. Emergency medical services (EMS) were called, and the patient was brought to the Emergency Room (ER). En route to the ER, the patient experienced another two seizure episodes. The patient had started to experience auditory/visual hallucinations and felt his dead sister was talking to him. Other than that, the patient had remained asymptomatic and denied having any chest pain, shortness of breath, lightheadedness, or dizziness. 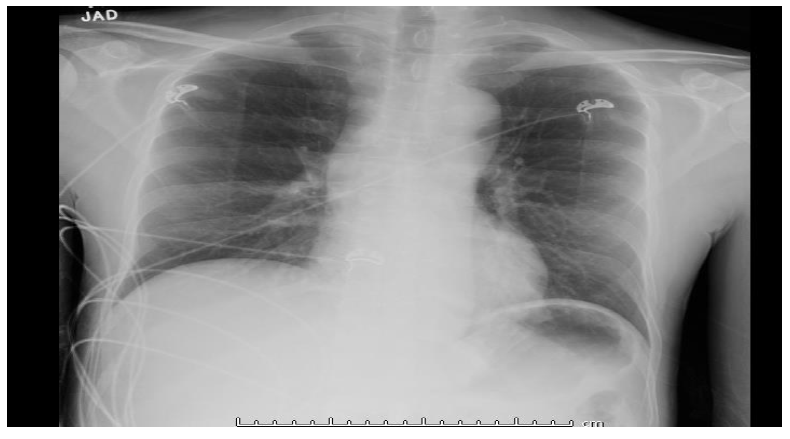 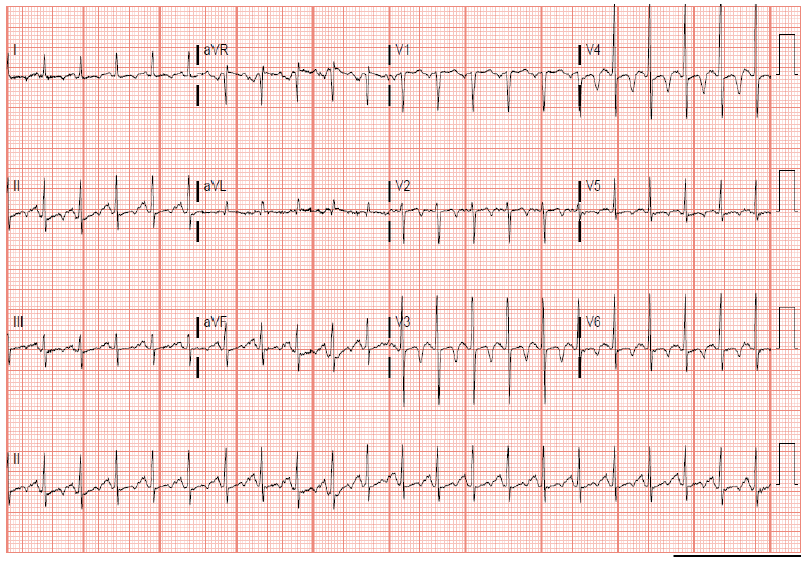 The patient started to have non-sustained narrow QRS complex tachycardia with HR in 200s even with the slightest movement and was placed on precedex drip overnight, to which he responded pretty well. Additional treatment included IV Protonix, banana bag, as needed Ativan, IV magnesium supplement, and tapering dose of valium. 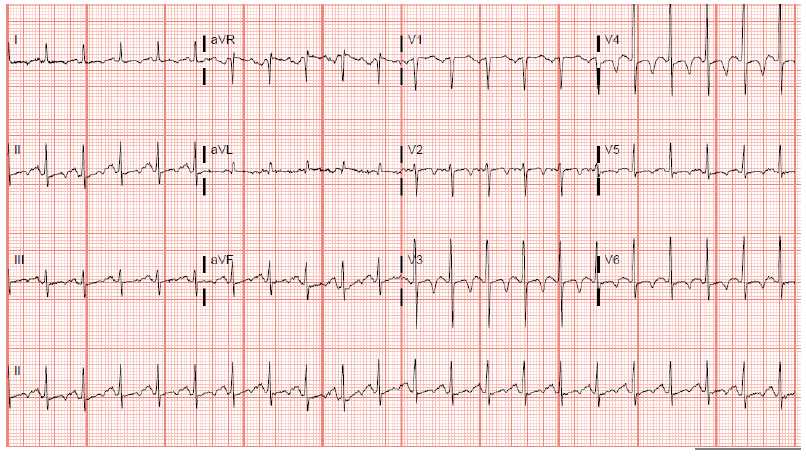 ECG next morning continued to show deep inverted T waves however more prominent along with prolonged QTc interval (Fig 4) despite electrolytes being repleted, with the most recent potassium being 3.8 mmol/L, and magnesium at 1.9 mg/dL. Troponin continued to remain negative. An echocardiogram was obtained, which showed grade II diastolic dysfunction, with moderately reduced systolic function with LVEF 25-30% and concentric left ventricle remodeling. No hemodynamically significant valvular stenosis or regurgitation. The patient was started on metoprolol, and lisinopril. The patient was discharged in stable condition on life-vest on day 4 of hospitalization with a recommendation to obtain a repeat echocardiogram and left heart cath on an outpatient basis. The outpatient scheduled LHC came back negative for any evidence of ischemia. 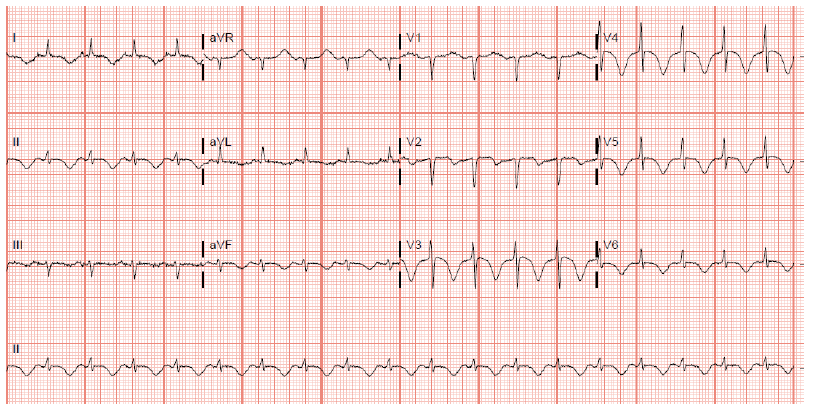 Alcohol use (a leading cause of preventable death) causes >95,000 death/year or 261 deaths/day in the US with an average of 29 life-year lost, according to the Center for Disease Control and Prevention (CDC) [4]. Alcohol dependency is found in up to 25% of hospitalized patients [6]. Toxic effects of alcohol use (>90gm/day for >5 years [3]) on cardiac myocytes are long known [7]. Alcoholic-dilated cardiomyopathy (ACM), defined as a reduction in cardiac myocyte contractility along with heart chamber dilatation [8]. A systematic review by Farinelli et al. has outlined ECG changes caused by alcohol abuse in detail [3]. The most common T wave changes in chronic alcohol users are inverted/spinous/dimpled/depressed/flattened/notched/ cloven T waves. EKG changes in acute or acute on chronic alcohol users increase T wave voltage or non-specific T wave changes. Prolonged QTc interval was seen in all the alcoholic groups [3]. Such EKG changes are pathognomic of cerebral ischemia [9, 10, 11], intracranial hemorrhage [12, 13], raised intracranial pressure [14], or head trauma [15] as well. Physicians must keep these EKG changes in mind while taking care of their young patients with a history of acute or chronic alcohol abuse. It is very easy to miss out on obtaining echocardiogram, or daily EKGs in these patients given their young age and absence of typical signs/symptoms (such as dyspnea, palpitation, volume-overloaded status, less commonly chest pain, arrhythmias on ECG and CXR showing cardiomegaly) even in the late stage of cardiomyopathy such as in our patient.  Delay in recognition of such a life-threatening condition can be lethal and can lead to irreversible damage to cardiac myoctyes (myocardial fibrosis) whereas early recognition of such a condition is rewarding as patients can observe alcohol abstinence and prevent irreversible damage. Knowledge of such EKG changes is even more useful when a history of long-term or heavy alcohol use has been concealed.

Alcoholic cardiomyopathy and EKG changes associated with it have long been recognized. However, such a lethal condition often goes unrecognized in early or late asymptomatic stages. Physicians should keep a high index of suspicion for non-ischemic alcoholic-dilated cardiomyopathy in young alcoholic patients when cerebral T waves are seen on EKG in absence of symptoms such as chest pain, palpitations, shortness of breath, or volume overload status.

The authors report no conflicts of interest (financial or non-financial) in this work.

The author has not declared receiving any grant/funding for this research from any funding agency in the public, commercial or not-for-profit sectors.