End Stoma Fashioning Techniques during a Total Laryngectomy - A Review

The technique of total laryngectomy and creation of end stoma hasn’t changed much considering a century of long history of this procedure. Laryngostomal stenosis is an unfortunate problem faced by the surgeons even today. Literature shows an incidence ranging from 4% to 43%. Emphasis on techniques of stoma creation doesn’t have good detailed description in many of surgical texts. Though correction procedures for stomal stenosis were discussed in detail in literature, there is paucity of literature in the area of techniques of creation of end stoma which in turn avoid stenosis at a later date. Considering the impact of stomal stenosis on a laryngectomee’s quality of life, it is necessary for every surgeon to know how to fashion an adequate end stoma which has low rates of stenosis. Surgical techniques which interposed skin flaps into tracheal wall to break the scar have been proven successful. We review the available literature to address this issue and describe techniques used by various authors.

In 1873 Theodor billroth has performed the first recorded laryngectomy. Langenbeck performed the first wide field laryngectomy. In 1906 Crile suggested the importance of addressing lymphatics during surgery. 1920s witnessed the development of first orthovoltage radiotherapy. Standardization of surgical technique now employed comes from the work of Hayes martin, Joseph ogura and others during 1950s. The use of postoperative radiation begun in late 1950s by Goldman, Silverstone and others. From the time of first laryngectomies been performed in late 18th century though the operative mortality, survival have improved considerably till date, operative techniques such has technique of creation of end stoma hasn’t changed [1].

Laryngectomy can be either performed in an ante grade pattern or a retrograde pattern depending on the location of the malignancy. Either way construction technique for end stoma doesn’t depend on laryngectomy technique [2].

Tracheostoma should be large enough to facilitate adequate respiration, to clear secretions, ease of cleaning. It should also be aptly small to occlude for speech production. There is no standard definition for laryngostomal stenosis. When stenosed the turbulent flow causes increase in resistance and airflow speed, dehydrates the tracheal mucosa, and predisposes to crusting and infection. This may be even more harmful in COPD patients. Montgomery [3] has classified stomal stenosis in to three types-

Yonkers and Mercurio [4] and Wax et al [5] have added a superior shelf type – due to overhanging superior flap. Other definitions included – patient not able to undertake routine day to day activities, needing a revision surgery, needing a cannula to maintain patency [5-7]. Literature shows an incidence of stomal stenosis ranging from 4% [8] to 42% [4]. Several patient related factors are implicated in development of stenosis, such as- bulky sternocleidomastoids, fat neck, defective or absent tracheal rings, keloid tendency, poor nutritional status, smaller tracheal diameter in female sex, irradiation etc [9]. There is varied opinion regarding radiation and stenosis. But Kuo et al showed no relation by a multivariate analysis [10]. Gregor and Hassman studied the relation of stoma size to pulmonary function measured by spirometry. They postulated that patients might cope adequately until the stomal diameter is 1/3 rd of their trachea. Average stomal cross-sectional area was 128.6mm2 which exceeds average cross-sectional area of rima glottidis in resting position (80mm2). Tracheal size did not correlate with height, weight or body surface area [11]. Paleri et al has devised and validated a quality of life questionnaire for function and care of end stoma. They also developed a custom designed sizer to measure stoma diameter. They found that 15mm diameter is apt for a laryngectomee for maintaining good quality of life [12].

4. Where the Stoma is Made

Stone can be fashioned within the main incision or separately in the lower skin flap. Literature suggests various advantages and disadvantages for both. It is postulated that if included with main incision the natural contraction of scar tends to laterally pull on trachea, thus widening the end stoma. Placing a separate incision is favored due to less downward pull because stoma is already fashioned lower in the neck, gentle outward traction, healthy blood supply, optimized healing and movement of neck doesn’t impact the stoma [13]. Nigam et al has reviewed 26 patients with stoma incorporated in main incision and 35 patients with separate stoma designed in lower flap. The average cross-sectional areas of stoma were higher in incorporated stoma group (190mm2 vs 90mm2) and 45% patients in separate stoma group ended up using stoma button when compared to just 3% patients in incorporated stoma group [14].

Cracovaner et al has proposed a way of sparing a mucosal tongue posteriorly upto or involving mucosa on cricoid, anteriorly resecting 2-3 tracheal rings for beveling and careful approximation of adequately resected skin flaps to tracheal mucosa to produce radial tension [15]. Mumma and pressman used a tantalum ring surrounding the tracheal ring subcutaneously at the stoma to prevent narrowing. However, contracture couldn’t be avoided in skin distal to the ring and extrusion rates were high [16]. Hartwell and Dykes [17] gave a technique where a superior triangular skin flap interdigitated into the slit created in posterior membranous trachea thus widening it (Figure 7). Care should be taken while separating posterior trachea from the esophagus and trachealis muscle division. Similar technique named apron tracheostome was described in detail by Talaat et al [31]. Myers et al described a similar technique but used a transposition flap instead of advancement flap used by Hartwell and Dykes, thus preventing the laxity of posterior skin flap [18]. Trail et al described Z-plasty technique which constituted an oblique incision in upper skin flap and an oblique incision in the posterior wall of trachea, so that a z plasty can be achieved (Figure 8) [19]. Concept of bevelling trachea by resecting anterior postions of 2-3 three rings can be traced way back in literature [15, 17, 20]. Clairmont described a double V method for stoma fashioning which included cresting an X within a circle and excising the lateral triangles leaving a bow tie/ butterfly skin flaps. Excessive fat is removed from the flaps and thinned. Trachea is incised obliquely and then V shaped portions are removed from anterior and posterior tracheal walls. Posterior flap is sutured in to the bottom of V of posterior trachea and anterior flap is sutured into bottom of V of anterior trachea. Effective method for breaking the scar line and splaying the trachea [21]. Amatsu and Jatho used a technique with anterior midline tracheal incision and retracting tracheal lips towards clavicle by non-absorbable sutures (Figure 9) [22]. Lam et al described a four flap interdigitating technique where a separate X shaped cruciate skin incision taken separately in the lower skin flap and trachea slit at four areas to accommodate these skin flaps (Figure 3).   Kuo et al utilized this technique in an extensive series of 213 patients with good results [7, 10]. Griffith et al compared three different techniques in his retrospective review of 56 patients and noticed a 29% stenosis rate in vertical transection of trachea group, 15% where the trachea was beveled and 8% stenosis rate in multiple interdigitating technique (Figure 4) [23]. Janardhan et al has conducted a prospective study of 58 patients comparing different end stoma fashioning techniques with a follow up of 2 years. This study has shown stenosis rates of 61% when incorporated in previous incision, 89% in separate transverse incision, 54% in separate ellipse excision, 28% when H or dumbbell shaped incision is used (Figure 5) [24]. Suzuki et al had prospectively studied 54 patients where end stoma was incorporated in the primary incision created in a triangular fashion by beveling 5 tracheal rings and fashioning a lower flap which creates a wide triangular stoma of cross sectional area of 15 to 20 cm2 (Figure 6). When compared with 2 ring beveling technique commonly used, this technique did not show any stenosis later date. Drawback of this extra-large stoma would be inability to occlude the stoma adequately to phonate in TEP users [25]. Isshiki et al had described a technique where a Y shaped incision is placed on the superior skin flap with two oblique slits on posterior tracheal wall to accommodate skin flaps in stomal reconstruction (Figure 2). They quoted that they never experienced flap necrosis due to diminished vascular supply, but it should be kept in consideration [26]. Bajaj et al has studied a lateral skin triangles incorporated in to resected lateral wedges on tracheal stump (Figure 1). He observed 59 patients with a median follow-up of more than 3years to have 8.5% stenosis rate with his technique [27]. 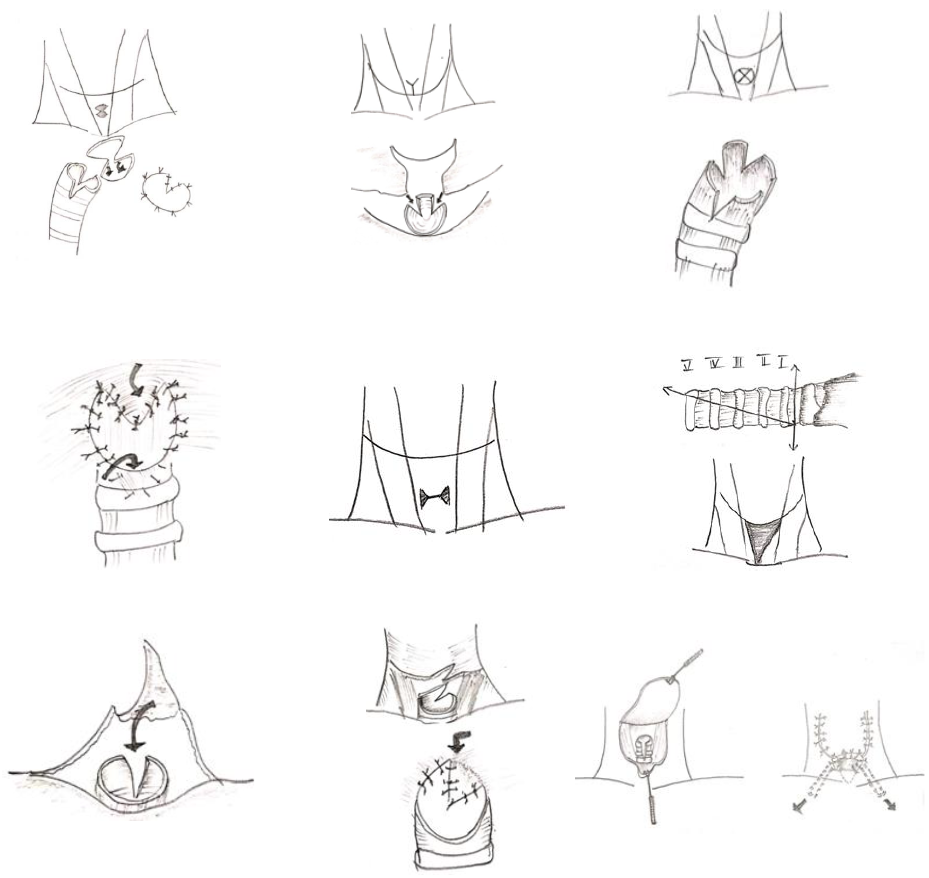 There is no recommendation regarding usage of absorbable or non-absorbable sutures to fashion an end stoma .Authors have used different suture materials for stoma suturing like non-absorbable monofilament nylon, polypropylene, polydiaxanone, polyglactin 910, etc. there is no preferences when all studies are reviewed. The surgeon may have to choose a sturdy suture material to stabilize and approximate trachea under apt tension to the skin flap at the same time avoid undue trauma to mucosa and prevent foreign body reaction. Primary tracheoesophageal puncture had been reported contributory to stenosis, especially a pharyngeal fistula when not secured with a prosthesis or an appropriate size feeding tube [9]. Kuo et al described primary TEP not significant in developing stenosis on a multivariate analysis [10]. Eric blom et al [28] has stated that the stoma must be at least 15 mm in diameter to not cause stenosis and at the same time accommodate a voice prosthesis. Singer et al [29] stated 1 cm diameter would be sufficient for the same. There is proven association between tracheostomal infection and stenosis [10]. Factors like previous tracheostomy, and whether a musculocutaneous flap used simultaneously, use of laryngectomy tube post operatively and concurrent neck dissection doesn’t associate with incidence of stenosis [9]. Some authors consider releasing sternal heads of sternocleidomastoid muscle to prevent vertical contraction of stoma.

Tracheostomal stenosis is a distressing complication faced by the modern surgeon. It needs careful preoperative planning and meticulous surgical technique to address this issue. Adequate sized stoma should be more than 14 mm2 in diameter and not more than 20 mm2.  Although breaking the circular pattern of scar formation by inculcating plastics into stoma creation have proven beneficial. There is a need for a prospective study for head on comparison of all techniques. There is no solid evidence for incorporating stoma in main suture line or create a separate one. Catlin et al emphasized that the best way to get an adequate stoma is to make at the time of laryngectomy [32].

We recommend measurement of tracheal stump diameter, beveling the trachea, releasing sternal heads of sternocleidomastoid if necessary, adequate trimming and fashioning of skin flaps and incorporating z plasties with interdigitating skin flaps in tracheal wall to provide good radial tension , good postoperative stoma care, avoiding infection, adequate moisturization and immediate extubation post procedure without stenting to achieve an adequate stoma. We also consider removing the shoulder roll and converting the patient position to supine neutral prior to stoma fashioning. Surgeon should also consider the fact the excessive thinning of skin flaps, long flaps with short base, and irradiated skin may undergo necrosis due to diminished blood supply, which in turn causes wound dehiscence, infection and stenosis. A modern surgeon should keep all these factors in mind when fashioning an end stoma.