Patients with the comorbid condition of connective tissue disease make operative management complex. Herein, we present the challenging case of a 23-year old man with Type IV Ehlers Danlos Syndrome who presented acutely with small bowel perforation. Both the small bowel perforation and enterotomies during surgery were successfully repaired by use of Polyglactin 910 (Vicryl) mesh pledgets rather when simple interrupted suture techniques proved to be ineffective secondary to poor structural integrity of the bowel secondary to Ehlers Danlos Syndrome. The sites of repair in subsequent operations were found to be intact, which shows that this method can be used in the repair of enterotomy in high risk patients with Type IV EDS.

We present this case of surgical repair of small bowel perforation in a patient with Type IV Ehlers Danlos syndrome (EDS), which is an inherited connective tissue disorder with an autosomal dominant inheritance of the COL3A1 gene, a gene responsible for type III procollagen production. Given that type III collagen is a major structural component of hollow organs such as vasculature, the uterus and bowels, the management of these patients is structured towards preventing complications that may arise from these systems; spontaneous bowel perforations are common complications, but given the nature of the disease, surgical management of this complication is challenging and difficult.

Ehlers Danlos Syndromes are a heterogenous group of inherited connective tissue disorders with multiple manifestations and genetic origins; one of the more common forms is the vascular form, type IV, in which there is an autosomal dominant inheritance of the COL3A1 gene, a gene responsible for type III procollagen production. Lack of production of this structural component affects hollow organs such as vasculature, the uterus, and bowels. Due to weakness of the walls making these organs, patients can present in various surgical emergencies such as spontaneous bowel perforation, organ rupture, vascular dissections and arterial rupture. Surgical management of patients is complicated as vascular and bowel repair are difficult given the nature of the condition; this difficulty is only exacerbated in the context of emergent surgical repair. Herein, we report a case of small bowel perforation repair in a patient with EDS Type IV using Polyglactin 910 (Vicryl) mesh pledgets.

A 23-year-old male with history of heroin abuse was transferred from an outside hospital with suspected bowel perforation and was promptly admitted to the surgical ICU; his physical examination was significant for diffuse abdominal tenderness, signs of peritonitis, and tachycardia. He reported that he had a prior history of spontaneous colonic perforation with ileosigmoid anastomosis and sigmoidectomy nine years prior; on admission, abdominal x-ray revealed pneumoperitoneum, which prompted an emergent exploratory laparotomy as per our trauma protocol. During the exploratory laparotomy, we conducted a thorough survey of the abdomen, and performed an extensive lysis of adhesions that resulted in multiple enterotomies in the jejunum resulting in a 50cm small bowel resection; anastomosis was deferred. The abdomen was packed with Combat Gauze™ and laparotomy pads and closed with temporary negative pressure wound vacuum dressing. The patient returned to the surgical ICU in stable condition; the following day, the patient underwent reopening of recent laparotomy during which the bowel was found to be exquisitely friable; the gentle removal of laparotomy pads resulted in additional enterotomies caused by gentle traction. These enterotomies were unable to be controlled with suture closure, so we utilized woven Polyglactin 910 (Vicryl) mesh pledgets with interrupted Polyglactin 910 (Vicryl) sutures.

The patient returned to the ICU in stable condition; two days later, he underwent re-exploration of recent laparotomy for possible bowel repair, but upon opening, we noted two full thickness bowel injuries distal to prior intact repairs, which were not amenable to repair, so an additional 30 cm were resected. Figure 1 shows the friable and edematous serosa of the jejunum proximal to the ligament of Treitz upon reopening of abdomen, which was the operation after the Polyglactin 910 (Vicryl) pledget repair operation the day prior. Patient returned to the ICU in stable condition; the following day, discussion about the risk of re-perforation and morbidities associated with patient, family, and treatment team resulted in desire for an ileostomy. The patient returned to the operating room for maturation of an ileostomy; upon entry into the abdomen, bowel was noted to be still friable and edematous with three new enterotomies and a small section of necrotic, ulcerated jejunum which resulted in a 20 cm resection of small bowel with woven Polyglactin 910 (Vicryl) mesh used to reinforce the staple line and the remainder of the small bowel being brought up for ostomy without maturation. The ostomy site was also reinforced with Polyglactin 910 (Vicryl) pledgets. The patient returned to the operating room the next day for maturation and abdominal wall closure with no complications. Patient returned to the ICU in stable condition; eventually, the patient was discharged home. 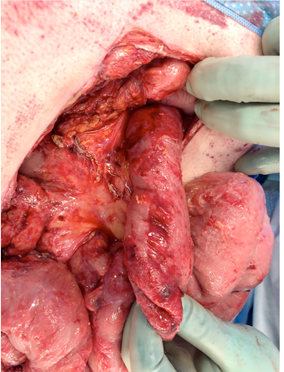 Figure 1: Taken during third operation after the operation with Polyglactin 910 (Vicryl) pledget mesh correction of the second operation. Proximal bowel just after the ligament of Treitz with area concerning a serosal injury that was pre-existing and this was left in place as the bowel was very edematous and friable.

The complications of the disease usually manifest in the form of vascular rupture or bowel perforation; by the age of 20 years old, patients had a 25% risk of a medical or surgical complication, and, by the age of 40 years old, the risk increased to 80% [6]. While vascular rupture is the more common complication of EDS Type IV and leading cause of death in these patients, bowel perforation is the second most common surgical complication at around 25% incidence [6] that usually manifests in perforation of sigmoid colon followed by small bowel and stomach.

Pepin et al found that the likelihood of death in these patients was a 2% when compared to 45% in patients with organ rupture, and the mean age of initial complication was 23.5 years with gastrointestinal rupture occurring at a younger age than arterial rupture [6]. El Masri et al conducted a systematic review of literature concerning GI manifestations of the disease and found that in a review of 27 case reports, 76% of patients experienced spontaneous colonic perforation as the first GI complication of the disease. This was then corroborated by their review of retrospective case series found that 19-25% of patients had a spontaneous bowel perforation or solid organ rupture with 15% of patients experiencing a GI complication as their first manifestation of the disease [3]. Another study found that mortality of intestinal perforation was 12%, which constituted an acute surgical intervention, and intestinal perforations that were repaired with end to end ileorectal anastomosis resulted in a higher reperforation rate when compared to colostomy (67% vs 27%) [7].

Surgical management of these patients is mired by the tissue fragility and poor wound healing, which can lead to death, dehiscence of the wound, hemorrhage of abdominal vasculature, fistulas and adhesions. Pepin et al recommended that spontaneous bowel perforation can be repaired with partial colectomy with end-to-end reanastamosis, Hartmann procedure, or total colectomy with end-to-end reanastamosis in the context of large bowel perforation [6,7,8]; there are no clear recommendations for small bowel perforation as a) EDS type IV is a rare condition and b) spontaneous small bowel perforation is rare. In one case report of a patient with overt gastrointestinal bleeding with ileal perforation, Allaparthi et al recommended conservative medical management with surgical management reserved for patients who had failed conservative management or were hemodynamically unstable [1]. Meanwhile, El Masri et al recommended a Hartmann procedure in the emergency setting as partial colectomy with anastomosis had a higher rate of reperforation (62% vs 32%) [3]. Fikree et al recommend non-surgical conservative management of bowel perforation or bleeding, due to the high risk of complications, but recognize the need for acute surgical intervention can be necessary [4]. A study by Frank et al found that of 112 GI manifestations of EDS Type IV, 85 (76%) required surgery and 41% of these manifestations was colonic perforation. Of these surgeries, there were 43 complications related with 37 of the surgeries with 16% of cases having reperforation after Hartmann procedure or simple colic repairs, 16% developing skin closure problems, 14% developing incisional hernias, 9% developing fistulas, and 9% developing obstructions [5].

All of these studies highlight the fact that patients with EDS type IV are at a high pre-operative risk of developing the complications from necessary surgical repair. There is no consensus in the surgical field or in current guidelines of how to surgically manage these patients beyond the current GI procedures of anastomosis or colectomy, which is where our case provides a possible solution.

In our case, our patient was hemodynamically unstable and was considered an acute trauma patient given his prior history of rupture and extent of pneumoperitoneum, so surgical management was the only option. The friability and fragility of the gastrointestinal tissue found on opening presented surgeons with the dilemma of how to repair the perforation and subsequent enterotomies formed on manipulation of the bowel. The surgeons elected to place a strip of cut Polyglactin 910 (Vicryl) woven mesh, a common surgical material, into the enterotomy with delicate suturing of Polyglactin 910 (Vicryl) mesh with Polyglactin 910 (Vicryl) sutures to viable tissue; this method proved to be effective as subsequent re-openings of laparotomies showed that the prior repairs were stable and were used for additional enterotomies that occurred in the following surgeries. Even though, in our case, our patient eventually had an ileostomy placed, the Polyglactin 910 (Vicryl) mesh pledget method did not result in additional perforations and persisted throughout the patient’s stay. This method can prove to be a viable manner to repair enterotomies in not only EDS Type IV patients but also in other patients.

Our case has highlighted that while surgical management of small bowel perforation in EDS Type IV can be difficult and should be deferred until medical management has failed, surgical management is a viable option. It also highlights the importance of delicately manipulating bowel in these patients and the increased risk of complications that may arise from surgical repair of bowel perforation in these patients. The method of using Polyglactin 910 (Vicryl) mesh pledgets should be considered in the repair