Superficial granulomatous pyoderma (SGP) is one of four subtypes of pyoderma gangrenosum (PG), an uncommon neutrophilic dermatosis, that presents as superficial, indolent ulcerative nodules or plaques that arise independently from an associated underlying disease [1]. Granulomatosis and polyangiitis (GPA) is a systemic, cytoplasmic ANCA (cANCA) positive vasculitis of small and medium vessels classically presenting with a triad of vascular, pulmonary, and renal complications [2]. We report a case of a limited variant of GPA presenting as SGP in a 57- year-old male with multiple nonhealing, painful ulcers on the upper extremities, torso, and neck with histologic features of superficial ulcers with predominantly plasma cell infiltrate consistent with atypical SGP. Over the following year, violaceous ulcers appeared, and a larger wedge biopsy demonstrated sinus tract formation with underlying plasmocytosis with histiocytes and giant cells, neutrophilic inflammation, and focal granuloma formation without vasculitis. The patient developed pulmonary symptoms and fever in the setting of markedly elevated cANCA. A chest CT revealed a lung nodule with fine needle aspiration (FNA) demonstrating acute and granulomatous inflammation but no organisms. Based on compatible clinical and histological findings, the diagnosis of GPA presenting as SGP was established. This case of a variant of GPA initially limited to the integument and mistaken for SGP characterizes the clinical and histopathological presentations of two rare diseases and supports the notion that GPA should be included in the differential diagnosis for SGP even before systemic symptoms and elevated cANCA arise to ensure early diagnosis and treatment.

Superficial granulomatous pyoderma (SGP), also referred to as vegatitive pyoderma gangrenosum in some sources, is a subtype of pyoderma gangrenosum (PG), a rare neutrophilic dermatosis that often occurs with autoinflammatory disorders such as inflammatory bowel disease, hematologic disorders, and arthritis [1]. Unlike classic PG, SGP usually manifests as a more superficial, indolent ulcerative nodule or plaque that lacks an association with an underlying systemic or autoimmune disease [1,3].

A 57-year-old white male presented with multiple nonhealing, painful ulcers on the upper extremities, torso, and neck over a period of almost 1 year. Past medical history was unremarkable. The patient’s initial lesion occurred on the leg following a car accident. A punch biopsy performed at that time demonstrated a superficial ulcer with a predominately plasma cell infiltrate, and a presumptive diagnosis of atypical pyoderma gangrenosum (PG) was made. SPEP/UPEP were within normal limits. The lesion was treated with intralesional (IL) steroids and resolved.

Over the following year, the patient developed subsequent 3-5cm violaceous ulcers with shaggy borders and cribiform scarring on the upper extremities, torso, and neck (Figure 1). No systemic symptoms were present. Work-up for the etiology of the ulcers included CBC, CMP, UA, and SPEP/UPEP, all of which were within normal limits. HIV, RPR, and FTA-ABS testing were negative, and tissue cultures for bacteria and fungi were negative. A larger wedge biopsy was taken that demonstrated sinus tract formation with underlying plasmocytosis with histiocytes and giant cells, neutrophilic inflammation, and focal granuloma formation without the presence of vasculitis (Figure 2). When treated with intralesional steroids, there was mild, transient improvement but new lesions would develop. Systemic steroids led to moderate improvement, but this was discontinued due to peptic ulcer disease. Cyclosporine (3 mg/kg) also led to moderate improvement.

While on cyclosporine, the patient developed pulmonary symptoms and fever, and a chest CT was performed, revealing a lung nodule. Fine needle aspiration (FNA) of the lung nodule demonstrated acute and granulomatous inflammation but no organisms. Cytoplasmic ANCA (cANCA) was markedly elevated. Repeat BUN/creatinine and UA were within normal limits. The patient was diagnosed with GPA and treated with systemic corticosteroids in combination with oral cyclophosphamide. Both the skin and lung lesions completely resolved over the next few months following therapy. 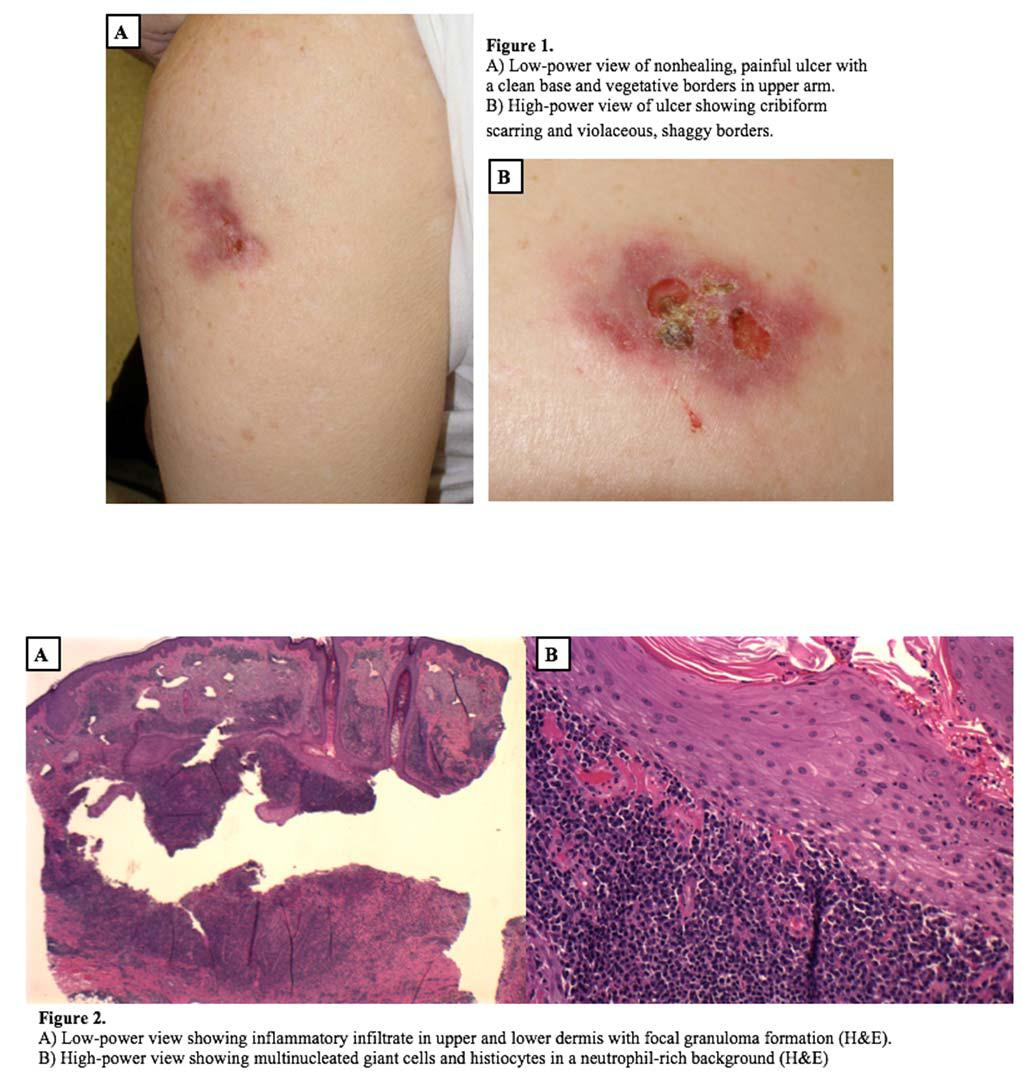 GPA and SGP are rare diseases of unknown etiologies that can be difficult to diagnose [3]. Skin lesions are present in half of GPA cases and can have various clinical presentations, including palpable purpura, necrotic ulcerations resembling PG, verrucous nodules (usually on elbows), subcutaneous nodules, and gingival hyperplasia [7]. Our patient presented with a rare case of a limited, protracted variant of GPA manifesting as SGP.

The classic histopathologic description of SGP is that of a 3-layered granuloma with an innermost zone of neutrophils, a surrounding layer of granulomatous inflammation with histiocytes and giant cells, and an outermost

layer of plasma cells and eosinophils [1,3,7]. SGP, like PG in general, is a diagnosis of exclusion, and other causes of chronic ulceration such as infection, malignancy, or autoimmune disease need to be excluded [3,6].

In addition to compatible biopsy findings, definitive diagnosis of SGP relies on clinical presentation and course of disease [1,8]. Clinical appearance of SGP is usually a sterile, well-defined superficial ulcer with a clean base and no undermining borders most commonly occurring on the trunk and rarely on the face [1,3,6-8]. In contrast to classic PG, SGP typically presents as slowly progressing, more superficial granulomatous lesions and as such has a more favorable prognosis and is not associated with underlying systemic or autoimmune disease [1,3,6-11]. SGP usually resolves with local, topical or intralesional anti-inflammatory or anti-microbial agents and does not require more aggressive systemic immunosuppressive agents that may be required in the treatment PG lesions or GPA, although a handful of cases of more aggressive SGP variants on the face, head, and neck have been reported [9-11].

A protracted superficial variant of GPA has been described that is characterized by ulcerating, necrotizing lesions of mucosa and skin confined to cutaneous and upper respiratory tract [4]. Limited variants of GPA have also been described in the absence of renal disease [4]. If untreated, progression to more fatal multi-organ involvement seen in classic GPA may develop, justifying early treatment with aggressive systemic immunosuppressive agents.

Some cases of atypical GPA presenting as PG have placed GPA on the differential for chronic, painful ulcers, but only a few cases of GPA presenting as SGP have been reported [4-6]. Recognizing rare variants of GPA limited to the integument can ensure appropriate treatment to prevent further systemic involvement, permanent wound scarring, progression to renal failure, or death.

We present this rare case of GPA presenting as SGP to help characterize the clinical and histopathological presentations of 2 rare diseases and to support the notion that limited variants of GPA should be included in the differential diagnosis for SGP for proper long-term monitoring and treatment of potential systemic complications that may arise in the future.