Inflammatory Myofibroblastic Tumor at base of Tongue: A Case Report

Introduction: The inflammatory myofibroblastic tumor is a rare type of tumor more commonly located at the lungs, abdomen, and pelvis, rarely located at head and neck. The etiology and pathogenesis remain elusive but 50% of the cases involve ALK locus on the 2p23 gene.

The study was previously reviewed and approved by the University’s Ethics and Research Committees, receiving the registration number 0T14-004.

Case presentation: We report a 43-year-old male presented with large inflammatory myofibroblastic tumor at the base of the tongue, the patient referred dysphagia and dysphonia. He had a history of two partial resections and radiotherapy. A complete excision was performed. Satisfactory postsurgical outcome and 6-month follow-up.

Conclusion: Inflammatory myofibroblastic tumor is rarely located at the head and neck, the occurrence in the oral cavity is unusual even at the tongue. The etiology is still unclear, it has a locally aggressive nature and its growth velocity is variable. Different treatment modalities have been described; however, the complete excision is proven the most effective. Immunohistochemical findings may not establish a final diagnosis.

Inflammatory myofibroblastic tumor (IMT) is a type of tumor comprised of different myofibroblast spindle cells infiltrated by many inflammatory cells and is usually accompanied by conspicuous lymphoplasmatic infiltrates and a myxoid stromal background, primarily occurring in children and young adults. According to the World Health Organization (WHO) classification of Tumors of Soft Tissue and Bone (2013), the IMT is an intermediate neoplastic lesion (aggressive, with occasional metastasis) [1,2].

The first case reported was first observed in the lung and was described by Brunn in 1939 [3]. It was named by Umika et al in 1954 due to its similar behaviour to a malignant process [2]. The most frequent location is the lungs, abdomen and pelvis, but can also be presented in other sites through the body [4].

The etiology and pathogenesis remain elusive. Trauma and infections such as herpes simplex virus type 8 and Epstein- Barr virus, as well as autoimmune reactions, have been suggested as etiological factors [2]. IMT is characterized by rearrangements involving the ALK gene locus on 2p23 in 50% of the cases [4].

Here, we describe a case of a base of the tongue IMT, referred after multiple resections. The study was previously reviewed and approved by the University’s Ethics and Research Committees, receiving the registration number 0T14-004.

A 43-year-old male patient whose main complaint is a 3-year history of pharyngeal globus attended to our department of ORL referred from a 2-level hospital of a city nearby. He has a history of a tongue tumor. He was treated with surgical resection of a tongue tumor in 2016. A tracheostomy and gastrostomy were performed due to dysphagia, dysphonia, and stridor. In 2017 the symptoms recurred, it was treated with radiotherapy and a second resection was performed. He was referred to our hospital to continue his attention and surgical management.

He had a smoking history of 21 years and 2 packs per day, but inactive 8 years ago. Alcohol history of 16 years, inactive 13 years ago. In the first examination at our hospital, the patient referred dysphagia and dysphonia. In the physical examination of the oral cavity, a tumor in the tongue was observed. The tumor was located at the base of the tongue in the medial line from the terminal sulcus to the vallecula. It extended to both lateral pharyngeal walls, contacting the posterior faucial pillar.

This tumor had a whitish coloration without abscesses or hemorrhage, as shown in Figure 1. The patient had a previous CT scan of 10/16/2018 (Figure 2), which revealed the pharynx was obstructed by the tumor. A timeline of the events is listed in Table 1, Figure 3 shows images of the procedure. 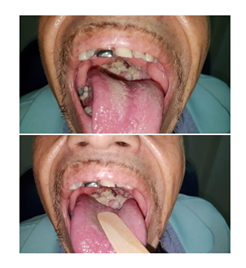 Figure 1: Physical Examination of the patient 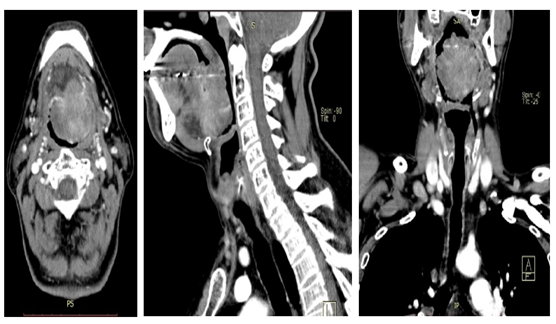 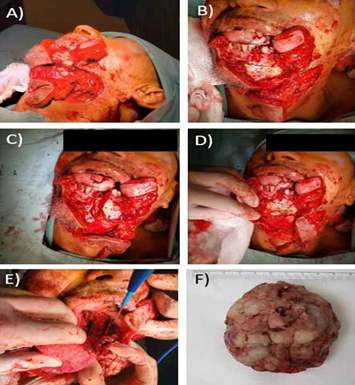 IMT has been applied to a heterogeneous group of inflammatory lesions of varying etiologies and diverse nature. This tumor was originally described in the lung [3], however extra-pulmonary locations have also been reported in different anatomic sites [5]. The larynx is the most common locations in head and neck [6]. It’s occurrence in the oral cavity is unusual and is even less frequently localized in the tongue [7]. In our English and Spanish literature search, only a few cases have been described in the tongue (Table 2).

The etiology of IMT is still unclear. Trauma or chronic irritation may prompt an inflammatory response with reactive tissue proliferation and participation of myofibroblasts; in this way several oral IMT have been preceded by mucosal trauma [12]. Epstein-Barr virus (EBV) infection and Human herpesvirus-8 has been reported as another possible etiologic agent [13,14]. One study suggests that IMT may be considered an IgG4-Related autoimmune disease [14]. In 50% of IMT’s abnormalities in chromosomal band 2p23, resulting in a rearrangement of the ALK gene, are demonstrated [7,13].

Immunohistochemical findings are variable according to the literature. Positivity for vimentin, desmin, and smooth muscle actin are frequently showed. Only one study was reported positive for ALK-1 protein on IMT of the tongue [7]. In our case report, only Vimentin was positive (see Table 3).

The tumor has a locally aggressive nature and may have slow or rapid growth. Usually the patients have progressive symptoms, which depend on the mass effect of the tumor [11]. Our patient symptoms included dysphagia, dysphonia and stridor. This type of tumor is rarely seen in the tongue and might be difficult to diagnose. According to the tumor presented in our patient recurrence and aggressiveness, the differential diagnosis from malignant tumors was done. However, the principal differential diagnosis of IMT in the tongue included tumors such as, fibrosarcomas [10].

Treatment described in the literature include steroid therapy, curettage, radiotherapy, and chemotherapy [5,13]. Surgical resection is first recommended [7], however, according to the other case reports and our case, the complete excision was the final treatment and has been proven to be effective in controlling these lesions, without recurrences [12].

The strength of this work, it’s the first case report to our knowledge in Mexico about IMT and it’s the second in the literature that was reported on the base of the tongue, but first to mention the complete excision treatment on this anatomical zone.

As shown in the case presented, IMT must be considered in the differential diagnosis of the tongue tumors, although is not frequent. Surgical complete excision can be considered the first recommended to control the recurrence on IMT on base of the tongue. Immunohistochemical findings are important but are variable and not for establishing a final diagnosis.

We thank Nadia Gabriela Jasso Ramírez, MD, and Eliseo Vela Barrera, M.D, for their contribution in the accomplishment of this research paper.

Authors declare no financial/conflict of interest or source of funding.