Background: Polycystic Ovary Syndrome (PCOS) is characterized by a combination of signs and symptoms of androgen excess and ovarian dysfunction. Plasma prolidase is a member of matrix metallo-proteinase family, which is altered during extracellular matrix remodeling of ovary. Evaluation of plasma prolidase level may be helpful in diagnosis of PCOS.

Objective: To evaluate the role of plasma prolidase in the diagnosis of polycystic ovary syndrome.

Methods: This cross-sectional study was conducted at the Department of Laboratory medicine Bangabandhu Sheikh Mujib Medical University (BSMMU), Dhaka, Bangladesh, from March 2021 to February 2022. A total of 70 study subjects were selected by purposive sampling technique. Among them 35 were diagnosed patients of PCOS (group I) and 35 were healthy individuals as control subjects (group II). All study subjects were evaluated by history, physical examination and relevant investigations. Their plasma prolidase levels were measured by enzyme-linked immunosorbent assay (ELISA) following standard procedure. Data were analyzed and compared by statistical tests.

Polycystic ovary syndrome (PCOS) is regarded as a major public health issue due to its high prevalence [1]. It is a heterogenous disorder characterized by hyperandrogenism associated with chronic anovulation, hirsutism, obesity and insulin resistance [2]. The World Health Organization (WHO) estimates that approximately 3.4% of women are affected by PCOS in each year [3]. The global prevalence of PCOS ranges from 2.2% to 26% [4]. Although the prevalence of PCOS varies depending on environmental, genetic, and ethnic factors as well as the criteria used for diagnosis [5].  PCOS has multifactorial risk factors including- family history of PCOS particularly first-degree relatives, fast food diet habits, physical activity, body mass index (BMI) and waist circumference  [6] [7]. Infertility is a common issue among PCOS women [1, 3, 5]. PCOS could be associated with secondary amenorrhea, type 2 diabetes mellitus (DM), cardiovascular disease, dyslipidemia, endometrial carcinoma etc [1, 3, 5, 8].

About 70% of affected women remain undiagnosed or have long delays before the condition is recognized [9]. Although polycystic ovary syndrome (PCOS) is an extremely normal endocrine condition, the etiology and pathogenesis of this disorder are not yet completely understood [9, 10]. Women with PCOS have abnormalities in androgen and estrogen production [10]. Female reproductive cycle is regulated by various hormones, growth factors and cytokines [11]. These growth factors are released from the extracellular matrix [12]. Prolidase is a cytosolic enzyme that belongs to the matrix metalloproteinase family and is responsible for the extracellular matrix degradation of the ovary [13]. Prolidase is released from erythrocytes, leukocytes, dermal fibroblasts and keratinocytes [14]. Prolidase regulates collagen metabolism and extracellular matrix remodeling [15]. In women with PCOS, elevated matrix metalloproteinase levels may be associated with abnormalities in ovarian extracellular matrix remodeling, multiple cyst formation and chronic anovulation [16]. Transvaginalsonography is used to diagnose PCOS with ovarian volume and stroma [17]. However, transvaginalsonography has some limitations in diagnosing PCOS [17]. Teenagers and women of reproductive age are unwilling to undergo transvaginal examinations due to their virginity or discomfort [17]. Obesity is another issue that creates problems in transvaginalsonography imaging [17]. Moreover, it needs experts to measure follicle number in 3D stroma and ovarian volume specifically [2]. Therefore, it is necessary to find out an easy, reliable biomarker for the diagnosis of PCOS. It was reported that there is strong and positive association between plasma prolidase and PCOS [2, 11, 16]. But there is scarce evidence to evaluate the role of plasma prolidase in diagnosis of PCOS in Bangladesh. In this background, this study was aimed to evaluate the role of plasma prolidase in diagnosis of polycystic ovarian syndrome among Bangladesh population.

This cross sectional study was conducted at the Department of Laboratory medicine Bangabandhu Sheikh Mujib Medical University (BSMMU), Dhaka, Bangladesh, from March 2021 to February 2022. The study protocol was approved by the Institutional Review Board (IRB), BSMMU, Dhaka, Bangladesh. A total of seventy (70) study subjects were selected by purposive sampling technique. Among them 35 were diagnosed patients of polycystic ovary syndrome (PCOS) in reproductive age (group I) and 35 were age matched healthy individuals as control subjects (group II). Patients with any systemic disease (like- liver disease, kidney disease, heart disease or any other systemic diseases), patients having hypothyroidism or androgen producing tumors or hyperprolactinemia or active thyroid disease or cushing’s syndrome and pregnant subjects were excluded from the study. In this study PCOS was diagnosed according to the international evidence-based guideline for the assessment and management of polycystic ovary syndrome 2018 [18]. According to this guideline, PCOS is diagnosed by menstrual history, clinical and biochemical hyperandrogenism and ultrasonography for polycystic ovarian morphology [18]. All study subjects were evaluated by history, physical examination and relevant investigations.

About 5ml of venous blood sample was collected from antecubital vein of each study subject with all aseptic precaution. The blood sample were collected into a violet tube containing 0.5% chlorhexidinegluconate. Each tube was labeled with the patient’s identification number. Then blood was centrifuged by 3000 rpm for 5 minutes at room temperature (22°C - 24°C) and separated into eppendorf tube for analysis and storage.Separated plasma was storage at -20°C temperature until analysis was done and for further used. All samples were tested within one month of collection. Plasma prolidase level was measured by human prolidase (peptidase D) ELISA (enzyme linked immunosorbent assay) kit (MBS9714914) using the principle of Sandwich-ELISA method.

This cross-sectional study was intended to evaluate of the plasma prolidase level in diagnosis of polycystic ovary syndrome (PCOS). A total of 70 subjects were enrolled according to the selection criteria. Of them 35 women in reproductive age who diagnosed as PCOS patients were categorized as group I and another 35 were age matched healthy women categorized as control group (group II). Mean (±SD) age of the group I patients was 23.7±5.1 years and that was 24.4±3.5 years in group II (p=0.476). It was observed that patients with family history of PCOS and patients having diabetes mellitus (DM) were significantly higher in group I (p<0.001). The mean (±SD) body mass index (BMI) of the patients in group I was significantly high (p=0.038) (Table- 1).

Table 2: Distribution of the patients by clinical presentations in group I (n=35)

Mann-Whitney U –test was performed to analyze the data, s=significant 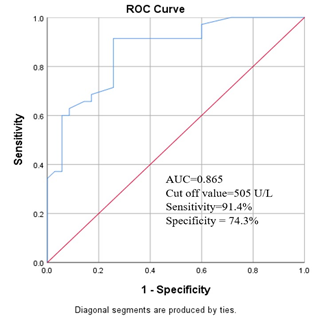 Polycystic ovary syndrome (PCOS) has become an important public health concern worldwide. Severe diagnostic criteria were used to detect PCOS in last few decades where morphology of ovary was done by Transvaginalsonography or Ultrasonography [17]. There is no established blood biomarker is available for diagnosis of PCOS. Plasma prolidase is a member of matrix metallo-proteinase family which is responsible for extracellular remodeling of ovary [16]. Therefore, there is a possible relation between plasma prolidase and PCOS. In this background the aim of this study was to evaluate the plasma prolidase level in diagnosis of PCOS patients. Total 70 women in reproductive age were included as study subjects by purposive sampling technique following selection criteria. Of them 35 were diagnosed patients with polycystic ovary syndrome (PCOS) and rest 35 subjects were age matched healthy women as control group. In this study, it was observed that mean(±SD) age of PCOS patients was 23.4(±5.4) years and that was 24.4(±3.5) years in healthy individuals. A couple of previous study reported the mean age of PCOS was 26.50(± 2.023) years [2] and 24.13(±6.26) years [11]. These findings were nearly consistent with the finding of current study.

Plasma prolidase level is significantly higher in polycystic ovary syndrome (PCOS) patients than healthy individuals. Area under the cure (AUC) has showed very good discrimination ability in detection of PCOS. Because of significant sensitivity and specificity, plasma prolidase level may be used as an important tool for the diagnosis of polycystic ovary syndrome.

It was a single centre study with relatively small sample size. Moreover the sample was taken purposively; therefore there might be chance of bias which can influence the results.

A multicenter prospective cohort study with large sample size is required to confirm the findings of this present study. Follow up study is recommended for better evaluation of plasma prolidase with prognosis and outcome of polycystic ovary syndrome.

The authors declared no conflicts of interest regarding this publication.