To correlate serum TSH (Thyroid stimulating hormone) levels with fasting bile cholesterol and TSH levels and with type of stone in gallstone disease.

Cholelithiasis is by far the most common disease state involving gallbladder and biliary tree. The concentration of solutes in the gallbladder differs from rest of the biliary tree as gallbladder concentrates bile. This solute concentration along with stasis of bile in the gallbladder lead to stone formation. Based on the principle solute the precipitates in to stone, gallstone divided into two major subtypes. Around 70% of gallstone formed by precipitation of cholesterol and calcium in America and Europe and less than 10% accounts for pure cholesterol stones. Where as in Asia, the precipitation of concentrated bile pigments, breakdown product of hemoglobin lead to 80% of pigment stones [1]. There are four major factors which explains most gallstone formation: super-saturation of secreted bile, concentration of bile in the gallbladder, crystal nucleation, and impaired gallbladder motility. Increased  concentrations of cholesterol and lipid in bile secretion from the liver constitute is one predisposing condition leading to cholesterol stone. Cholesterol are solubilized by bile salts. When the concentration in the gallbladder vesicles exceeds the solubility of cholesterol, cholesterol precipitates into crystals. Impaired gallbladder motility increases stasis in the gallbladder hence causing more solute precipitation in the gallbladder. Thyroid disorder is a frequent condition among the population, but it is usually over looked. Thyroid disorder among healthy subjects is rare. The recent study from United Kingdom;the thyroid disorders prevalence in healthy subjects was 2.6%. For more than a decade there has been a discussion, whether thyroid disorder can lead to gallstone disease. There are many explanations for a credible  relation between gallstone disease and hypothyroidism. One of the explanations is the association between thyroid function abnormality and lipid metabolism disturbance which  may eventually lead to change in the composition of the bile. Recent studies suggest T3 and T4 have effect on both bile flow and bile content. Hypothyroid patients have serum cholesterol level nearly 50% higher  than in euthyroid patients and most of the hypothyroid patients have elevated cholesterol level. Another explanation is that the sphincter of oddi relaxation is effected by low levels of T4, which lead to bile stasis and formation of stone [2]. In western countries adults developing gallstones is around 10-12%. There are very few studies on the prevalence of thyroid function abnormality which are previously undiagnosed in gallstone patients. If an increased prevalence of thyroid disorders will be found, it might have an effect on the diagnostic and therapeutic work up of patient with gallstone.

A cross sectional study was conducted in a total of 48 patients in the institution’s attached with Kasturba medical college, Mangalore. A detailed proforma was developed to record information regarding patients hospital details, age, sex, routine blood investigations, special investigations and imaging study. The sample size was collected based on 95% confidence level and 15% absolute precision.

Both male and female who are diagnosed with cholitithiasis and choledocholithiasis.

During the course of this study total 48 patients were included and parameters like serum TSH, fasting bile TSH, bile cholesterol, gallstone type and bile culture sensitivity were correlated. Among 48 patients, 22 were male and 26 were female patients. In all these patients bile was collected on table during both open and laparoscopic cholecystectomy, CBD exploration.

The maximum number was observed in the age group of 31-40 years, 41.7%, least in 61-70 years age group at 10.4%. This could also indicate increasing incidence in younger individuals due to change in diet and lifestyle, along with other comorbidities [3].

Contrary to expectation, 54% were male patients. This could be possibly due to difference in health seeking behavior or being asymptomatic or due to the small sample size.

Out of the total of 48, 77% had normal TSH, 23% in the high range. Though not statistically significant, the number of patients with high serum TSH values was higher than expected since none of the patients included in the study had any history of thyroid dysfunction.

On bile analysis, 65% had normal cholesterol values while 35% had elevated values (>0.9 (include unit)). p=0.059, not significant but the proportion of patients with elevated bile cholesterol is higher than was expected.

On gallstone analysis, all 48 patient sample gallstones were of cholesterol type.

There was no growth in any of the samples. 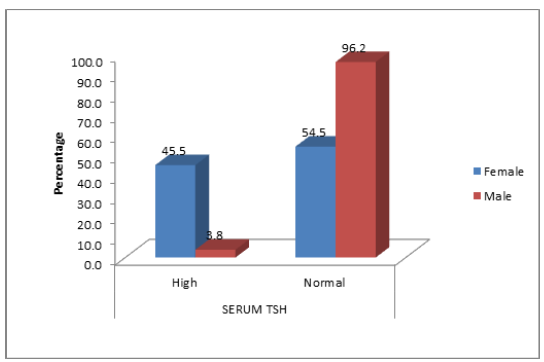 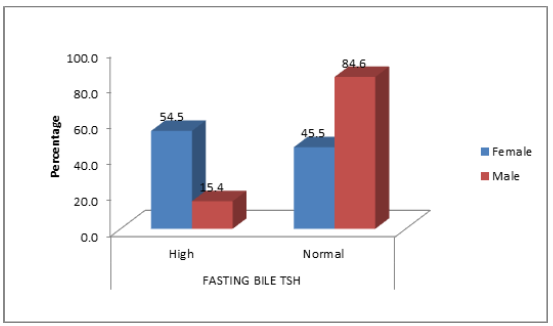 As can be seen from the bar graph, and by chi-square analysis, (p=0.001), it is seen that there is a significant relationship between serum TSH and female sex in cholelithiasis. Though the majority of women (54.5%) had normal values, B45.5% women had a high TSH vs just 3.8% of males. 54.5% women had elevated TSH levels in bile vs 15.4% males which was found to be significant. (p=0.004). No correlation between gender and bile cholesterol levels could be established (p=0.900).

The relationship between thyroid dysfunction and cholelithiasis and choledocholithiasis is a well-established one by several studies over the decades. This cross sectional study was undertaken to analyze the relationship of serum TSH, fasting bile TSH, and bile cholesterol in 48 patients with diagnosed gallstone disease. Interestingly, 41.7% of patients fell into the 31-40 years age group. As previous studies have shown, increasing incidence of gallstone disease occurs with progression of age, with prolonged effects of diet, lifestyle, comorbidities like diabetes mellitus, hypothyroidism. Thus, this number is a revelation to the rising prevalence of the disease. With an affordable, non-invasive, simple test such as ultrasonography, early diagnosis and treatment is key in preventing further progression and complications. The female preponderance of gallstones superadded by increased frequency of thyroid dysfunction among women also emphasizes on need for thyroid evaluation at time of diagnosis of gallstone disease in female patients, especially in the reproductive age group and those on HRT, due to the lithogenic action of estrogen. Serum TSH is the most reliable marker for thyroid dysfunction. Thus, 23% having elevated serum TSH among patients who never had history of thyroid disease nor treated for the same reaffirms that even subclinical hypothyroidism contributes to the pathogenesis of gallstones. There is sufficient literature to show that elevated TSH, even in the subclinical range, has direct effects on lipid metabolism. While beginning the study, it was under the assumption that the patients included in the study were euthyroid. But though they were clinically euthyroid, 23% of them had elevated TSH (10 out of total 11 were females), which was 45.5% of all females vs. 3.8% of all males. Though maximum number of those with elevated TSH were in the 31-40 years category (5 out of 20), the higher proportion was seen in the 41-50 years age group (42.9%, that is; 3 out of total 7). This could be an indication of higher prevalence of subclinical hypothyroidism in with increase in age. No prior literature showed use of TSH levels in fasting bile as a parameter. This study however revealed that a statistically significant 33% of patients had elevated fasting bile TSH levels, even higher than the number of those with elevated serum TSH levels. This could mean that there may be an extent of concentration occurring by the direct effect of hypothyroidism: impaired excretion of bile and reduced relaxation of Sphincter of Oddi [4]. The 33% of those with elevated bile TSH (12 out of total 16 were females) amounted to 54.5% of all female patients vs. 15.4% of all males who participated in the study. As seen with elevated TSH, though the number of patients with elevated bile TSH fell in the 31-40 years age group (8 out of 20), the higher proportion was seen in the 41-50 years age group (57.1%, that is, 4 out of 7). Thus, a statistically significant relationship could be established between female sex and elevated serum TSH and fasting bile TSH, but since the distribution of patients among age groups was highly variable, sufficiently significant correlation could not be interpreted. Analysis of bile cholesterol revealed that 35.4% of the patients overall had elevated bile cholesterol levels, which had an almost equal distribution among genders, 36.4% of all females and 34.6% of all males. No statistically significant relationship was seen. Despite subclinical hypothyroidism being more prevalent among female patients, bile cholesterol did not follow the same pattern. Other factors that contribute to cholesterol levels like dietary patterns probably resulted in the increased number among males. This goes to show more than the altered lipid metabolism, which manifests in gross elevation of TSH, subclinical hypothyroidism acts through multiple ways, resulting in cholesterol supersaturation and dysmotility. 50% of patients in the 31-40 age group had elevated bile cholesterol levels, which was maximum among all age groups as well. Further, gallstone analysis revealed that all 48 cases had cholesterol stones, which is a significant finding since going by the history of cholelithiasis, it was always seen that Asian and Indian subcontinent cases were pigment stones by majority as compared to western and developed countries, due to the differences in genetics, ethnicity, habits and increased chances of chronic biliary infections. But, recent studies since the turn of the 21st century have been able to demonstrate the change in this trend with increasing shift to cholesterol stones, actively catalyzed by a ‘westernization’ of sorts, with respect to diet, lifestyle, financial, education and environmental status, and rising prevalence of obesity, metabolic syndrome over infectious causes [5]. Case studies that have published positive results and dissolution of gallstones with thyroxine replacement therapy in subclinically hypothyroid gallstone patients is promising, that with careful titration and monitoring of dose, even surgical intervention may be avoidable. Since most patients of gallstones are asymptomatic and so is the case with subclinical hypothyroidism, the insight to concurrently evaluate the latter in the presence of the former or vice versa must be developed, especially in at-risk age groups and in women. Gallbladder cancer shares many risk factors with cholelithiasis, which in itself is a major risk factor [6]. With highest prevalence of gallbladder carcinoma being in India, it is just as important to prevent the same. Most cases of carcinoma present at a late stage and have a very poor prognosis and this in turn is yet another reason for active screening and treatment of cholelithiasis. With improving medical standards, health seeking behavior, it is a step in the right direction to look into and control modifiable risk factors such as hypothyroidism in preventing morbidity and mortality, and improving the quality of life.

In this cross-sectional study conducted in a tertiary healthcare setup, out of 48 patients (22 females and 26 males), statistically significant independent relationships between serum TSH and fasting bile TSH were established with female patients of gallstone disease. No such gender specific correlation was found with bile cholesterol levels. Similar trends could not be statistically derived with respect to age distribution. Thus, subclinical hypothyroidism, as corroborated by prior studies, indeed plays a significant role in cholesterol cholelithiasis, especially in women. Also, increased number of cases in the younger age group implies the need for clinical suspicion and intervention in this age group whenever possible.

The author declares that there is no conflict of interest