A retrospective cohort study was conducted, including all sternal fracture patients admitted to our level-I trauma centre between 2007 and 2019. Patients with sternal fractures due to cardiopulmonary resuscitation, patients <16 years, patients who died during initial hospital stay, and patients lost to follow-up were excluded from analysis.

In 13 years, 355 patients with traumatic sternal fractures were admitted, corresponding to 2% of all trauma patients. 262 patients were included in analysis. Mean age was 52 years and 71% of patients were male. Mean ISS was 19 (range 4-66). The majority of sternal fractures was located in the sternal body. Six patients (2%) underwent primary sternal fixation. Treatment failure occurred in three patients (1%) and was significantly higher in the surgical treatment group (p=0.001). There was no difference in treatment failure between patients with and without concomitant spinal fractures.

Conservative treatment is safe and effective for traumatic sternal fractures. Surgical treatment should be reserved for rare cases, such as imminent respiratory failure or debilitating symptomatic non-union.

Traumatic sternal fractures are relatively uncommon injuries with an estimated incidence of 2-8% in all blunt trauma patients, contributing to less than 0,5% of all fractures [1-4]. Sternal fractures are associated with direct blunt trauma caused by seat belt or steering wheel in traffic accidents, but these injuries also frequently result from combined direct trauma and indirect flexion-compression or flexion-rotation injury of the chest, such as in high deceleration or falls from height [2,4-14].

The incidence of sternal fractures has substantially increased since the introduction of seatbelt legislation in 19836. Moreover, computed tomography (CT) scanning has become common practice in blunt trauma evaluation, probably leading to a higher detection rate, as up to 94% of sternal fractures may be missed on conventional chest radiography [15,16].

We hypothesised that conservative sternal fracture treatment is safe and effective in most patients.

A retrospective single-centre cohort study was performed at the level-1 trauma centre of University Medical Centre Utrecht (UMCU), the Netherlands, from January 2007 to December 2019. Data was collected from the trauma registry maintained by the Trauma Care Network of Central Netherlands (TZNMN), which comprises all acute trauma patients admitted to our hospital. Patients with sternal fractures were identified by the Abbreviated Injury Scale (AIS) codes. Patients with traumatic sternal fractures who were examined at the emergency department within 48 hours after initial trauma and who were admitted to our hospital were included in this study. Patients with sternal fractures due to cardiopulmonary resuscitation were excluded.

Patients’ demographics, injury mechanism, injury severity score, length of hospital stay, and in-hospital mortality were collected. Patients lost to follow-up (who were transferred to another hospital or did not visit the outpatient clinic after hospital discharge), patients who died during initial hospital stay, and patients under the age of 16 years were excluded from analysis.

All patients received the same standard of care, consisting of a primary and secondary survey according to ATLS protocol [27], additional CT-imaging depending on clinical and X-ray findings, and hospital admission in case of multiple injuries or severe pain. Follow-up in outpatient clinic was tailored to individual patients’ needs depending on injury severity and patient preference. In case of isolated non-displaced sternal fractures, patients were instructed to only visit the outpatient clinic in case of problems. As a consequence, treatment success or failure detection in the long term depended on patients’ initiative to report complaints. To eliminate this potential bias, patients who did not visit the outpatient clinic were considered lost to follow-up, regardless of their reason for not visiting. Outpatient visits consisted of thorough clinical examination; radiological examination was at the treating physician’s discretion. Any associated spinal fractures were treated according to AOSpine guidelines; indication for surgical fixation of concomitant rib fractures was mainly guided by the inability to breath normally with adequate analgesia [28,29].

This study was approved by the institutional medical-ethical review board (METC Utrecht, WAG/mb/16/030735/WAG/mb/17/032781/WAG/mb/20/006460), and was performed in accordance with relevant guidelines and regulations.

Additional data on past medical history, diagnostics, concomitant injuries, treatment, and complications were collected from individual electronic patient files. Length of follow-up was defined as the time from hospital admission to the last follow-up visit to the Surgical, Orthopaedic or Rehabilitation outpatient clinic at our hospital.

Osteoporosis was defined as a positive DEXA (dual-energy X-ray absorptiometry) scan within three months post-trauma or recently started medication for osteoporosis. Sternal fractures were assigned to one of four fracture locations based on CT-scan: manubrium, manubriosternal joint (only in case of fracture-dislocations), sternal body, or xiphoid process. Sternal fracture displacement was defined as dislocation of ≥1 shaft width on lateral X-ray or sagittal CT-image. A senior orthopaedic spine surgeon (FCO) retrospectively classified all concomitant spinal fractures according to the AOSpine injury classification system [30-32].

Cardiac contusion was registered in case of diagnosis by a cardiologist. Glasgow Coma Scale (GCS) was recorded at hospital admission. Patients who were intubated and/or sedated upon arrival at the emergency department were assigned a GCS-score of 3 points. Cervical vascular injury was defined as dissection of the carotid artery or vertebral artery. Cerebral injury consisted of epidural/subdural hematoma, subarachnoid haemorrhage, or cerebral contusion. Limb and pelvic fractures were registered as extremity fractures.

Primary outcome parameter was sternal treatment failure, defined as either surgery after failed conservative treatment or reoperation after primary surgical treatment. Treatment failure could be caused by secondary dislocation, non-union (absence of callus formation three months after trauma), technical failure (malposition of or pain due to osteosynthesis materials), or post-surgical infection.

Categorical data were presented as ratio (percentage). Significant differences were calculated through Fisher’s exact test, because of small group sizes. For continuous variables, normality of distribution was assessed by quantile-quantile (Q-Q) plots and Kernel density scores. In case of normal distribution, results were expressed as mean (range); in case of non-normal distribution, they were displayed as median [interquartile range, IQR]. Significant differences were calculated using the Student’s t-test or Mann-Whitney U-test, respectively. For all analyses, a two-sided p-value <0.05 was used as a threshold for statistical significance. A subgroup analysis was carried out for concomitant spinal fractures.

Between January 2007 and December 2019, a total of 16,130 trauma patients were admitted to our level-1 trauma centre. In total, 355 patients suffered from a traumatic sternal fracture, corresponding to an incidence of 2%. Of these 355 patients, four patients were under the age of 16 years, 35 patients died during initial hospital stay, and 54 patients were lost to follow-up; these patients were excluded. The remaining 262 patients were included in statistical analyses (Figure 1). 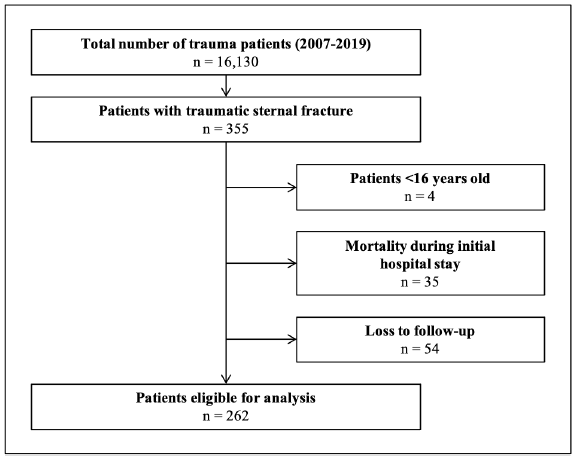 operative rib treatment (p<0.001). At baseline, there were no other differences between the conservative and operative sternal treatment groups (Table 1).

Median length of hospital stay was 11 days (IQR 7-22 days). 83 patients (32%) were admitted to ICU, with a median stay of eight days (IQR 4-16 days) with five days of mechanical ventilation (IQR 2-13 days); readmission to ICU occurred in eight patients (10%). Two out of six patients (33%) who underwent primary surgery developed a postoperative sternal wound infection; these were the patients who underwent re-operation. 51 patients (19%) suffered from pneumonia.

However, these results must be interpreted with caution. On the one hand, treatment failure might beunderestimated in the conservative treatment group

bPercentage was calculated based on the number of patients who were admitted to ICU.

Interestingly, in the surgical treatment group, patients with concomitant rib fractures (five out of six patients) underwent fixation of both sternum and ribs. These patients had extensive rib fractures with flail chest, worsened by the presence of a (dislocated) sternal fracture. Hence, fixation of both rib and sternum was performed.

Most importantly, all but one patient with treatment failure eventually showed satisfactory treatment 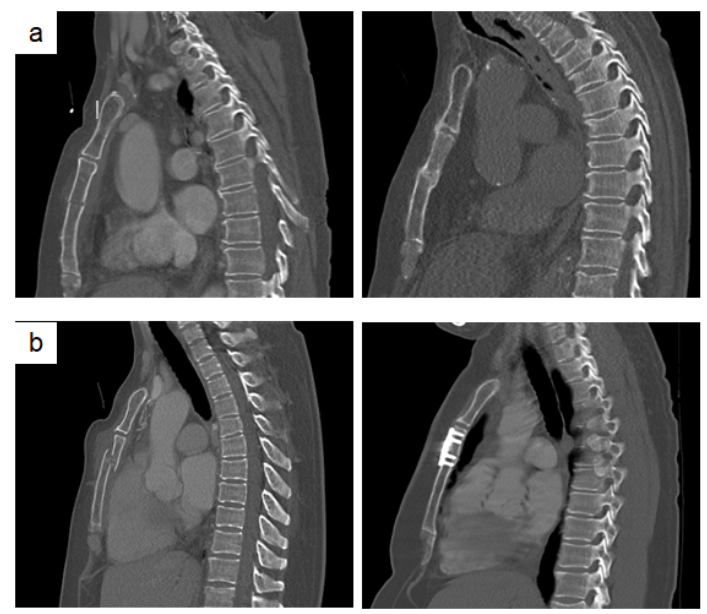 outcomes. The two surgically treated patients suffering from wound infection reported good functional outcome during their last outpatient visit; one of them showed radiologic consolidation, while the other showed consolidation of one of two sternal fractures (the other non-union being non-symptomatic). The patient with symptomatic sternal non-union (treated conservatively) also suffered from a type B spinal fracture which required surgical fixation; this patient reported mild remaining back problems. The patient with secondary sternal dislocation, however, required multiple re-operations for both sternal and spinal fractures and to date, has not been able to resume his work or hobbies.

cPercentage was calculated based on the number of patients with a spinal fracture.

dPercentage was calculated based on the number of patients with a rib fracture.

e19 of these 22 patients were intubated before arrival at the emergency department and received a GCS-score of 3 points.

by Christian et al. [23] and Choi et al. [33], surgically treated patients had a longer hospital stay, but lower mortality rate than conservatively treated patients; pulmonary complications occurred at the same rate in both treatment groups. Fracture healing and functional outcomes were, however, not reported [23,33].

In the present cohort study, 98% of patients were treated conservatively with good outcome, indicating that conservative treatment is safe and effective for almost all sternal fractures. Only six patients underwent primary surgery, of whom two patients developed a wound infection. Based on these findings, sternal fractures should be initially treated conservatively. Surgical treatment of sternal fractures should be reserved for imminent respiratory failure due to severe fracture dislocation or flail chest, or severe symptomatic non-union. Surgical indications should be standardised and set carefully by an experienced team, with potential complications in mind. Notably, improved analgesic techniques could play an important role in reducing pulmonary morbidity due to severe pain and thereby avert surgical treatment in the acute setting [34-36].

Biomechanically, based on the four-column spine model, combined sternovertebral fractures could result in severe thoracic wall instability [37]. In various

bPercentage was calculated based on the number of patients who were admitted to ICU.

To our knowledge, the present study comprises the largest patient cohort to date for which treatment outcomes are reported. With a median follow-up duration of 39 weeks, both short-term and long-term treatment complications could be detected. Using a prospective trauma registry, a complete cohort of patients was included in our cohort study, largely making up for the risk of information and reporting bias in a retrospective single-centre study design.

Nonetheless, several limitations apply to this study. Notably, 54 patients of our cohort were lost to
follow-up: 23 patients were transferred to other hospitals and 31 patients did not visit our outpatient clinic. However, many of these patients were advised to visit the outpatient clinic only in case of problems; it could thus be assumed that these patients had an adequate recovery. In addition, since the surgical treatment group was small, statistical outcomes might be skewed. Moreover, years after date, clinical decisions regarding type and timing of sternal treatment could not be reported in great detail.

Lastly, as highlighted by the large number of patients with associated spinal fractures (53%) and rib fractures (67%), these concomitant thoracic fractures could play a role in thoracic wall instability and, hence, in sternal consolidation. However, since 85% of patients with concomitant rib fractures were treated conservatively for their rib fractures as well, the role of these associated injuries will likely not have been an important confounder. In addition, due to the relatively small patient population and the limited surgical sternal treatment group, correction for these factors was considered unfeasible. The present study rather aimed to present general sternal treatment outcomes, which are severely underexposed in literature [20].

In conclusion, conservative treatment with adequate analgesia is preferable for almost all patients with a sternal fracture. Surgical treatment inherently bears the risk of complications such as wound infections, and should be reserved for rare indications, such as imminent respiratory failure or severe symptomatic non-union.

No funds were received in connection to the presented study.