Background: Primary hyperparathyroidism (pHPT) can be caused by different pathologic lesions – benign and malignant. The frequencies of changes vary, mainly because different criteria for diagnosis. It is especially visible in the group of benign lesions, which as it turns out, are not uniform in nature. The aim of the study was to attempt to assess the heterogeneity of benign parathyroid lesions, both adenoma and hyperplasia.

Methods: Resected benign lesions from consecutive series of 125 patients treated surgically for pHPT, were studied retrospectively. We were looking for a corelation between DNA ploidy, cell proliferation activity (S phase fraction) and the expression of parafibromin and galectin-3.

If pHPT is diagnosed, the procedure of choice is usually operative treatment. Identification of parathyroid lesions is based on histopathological criteria, the presence of which in the excised lesion may lead to the recognition of the patients as cured. However as it turns out, the group of benign changes is a heterogenous group, which may mean that a recurrence of symptoms after surgery is not always caused by cancer relapsed or unsuitable treatment [1, 2]. Heterogenic nature of benign parathyroid lesion makes it sometimes impossible to determine their pathology characteristics. It makes that there is a need to search other factors enabling better selection of patients with the risk of recurrence. Such factors to determine the biological behaviour of parathyroid lesions could be the assessment of cellular ploidy, S phase fraction [3, 4] or immunohistochemical studies of selected markers [5, 6].

Histopathological and immunohistochemical studies were performed in the Pathomorphological Department of Medical Studies in Zabrze belonging to Silesian Medical University in Katowice. Retrospective evaluation of histological slides by two independent pathologists was performed on archived paraffin-based slides from sections of parathyroid tumors. Follow to the pathologists, we define adenoma as a benign neoplasm (well limited or encapsulated) composed of chief cells, oncocytic cells, transitional oncocytic cells, or a mixture of these cell types. Hyperplasia is defined as an increase in chief cells, oncocytic cells, and transitional oncocytic cells mixed with stromal elements [7]. Parafibromin and galectin-3 were used for analysis of immunohistochemical analysis (IHC). When galectin-3 was used, cytoplasmic reaction was considered as a positive result and if parafibromin was used the nuclear reaction was marked as positive in immunohistochemical analysis (IHC) study (Figures 1a, 1b, 1c, 1d). The level of galectin-3 expression was calculated with a use of light microscopy with magnification of 400x in 10 visual fields. The field was considered positive if minimally 10% of cells showed positive reaction. The level of parafibromin expression was also calculated with a use of light microscopy with magnification of 400x. Thus, the reaction was considered positive when there was a positive nuclear reaction in minimally 1 % of cells.

Cytofluorimetric evaluation was performed in the Department of Pathology of Tumors Maria Curie- Sklodowska in Krakow in a Flow Cytometry Workplace. The analysis of ploidy and proliferative activity was estimated with the ModFit programme. The classification of DNA histograms to diploid and aneuploid was based on guidelines established at the DNA Cytometry Consensus Conference in 1992 [8].

Diploid histograms have only one fluorescent signal that corresponds with cells in G0/G1 phase. Aneuploid histograms had additional fluorescent signals, more than 20% of cells were in G2/M phase and there was visible second phase of G2/M. The distribution of cellular population according to the cellular mitotic phase was established: G0/G1, S, G2/M and the amount of cellular DNA was calculated. Coefficient of variation (CV), coefficient of proliferation, the percent of cells in S +G2/M phase and cellular ploidy- DNA index (DI) -the amount of DNA (level of fluorescence of cells in G0/G1 phase) in the studied cells compared to non-pathological cells (the amount of DNA in diploid cell is 1).

To unify histograms, the coefficient of variation (CV- the width of fluorescence signal for healthy cells in G0/G1 phase in the half of its height) cannot be higher than 8%. If the CV was greater than 8% it was considered faulty and not possible to include to evaluation due to high degeneration of nuclear DNA. Additionally, the level of serum parathormone (PTH) (N 12.0-65.0 pg/ml) and the level of ionized calcium (N 1-1.22 mmol/l) were measured before and 12 hours after surgery.

All recovered data were added to the spreadsheet program in Microsoft Office Excel 2019. After initial verification the data was relocated and laid down with a use of Statistica 7.1 PL. Statistical analysis was performed in Statistica 12.5 program. After establishing and classification of the data (by Kolmogorow-Smirnow test) we used t-Student test for comparison of data in normal dispersion and for data with different than normal dispersion we used U Manna-Whitneya. The results were presented in percentage, full numbers, averages and standard deviation. The numerical data were compared with the Chi2 Pearson test. For evaluation of usability of potential markers was used the ROC curve. The level of significance was calculated to p<0.05.

Diploid pathologies were found in 72 (57.6%) cases and aneuploid in 53(42.4%). We did not observed any statistically significant differences between the group of adenomas and hyperplasia in terms of DNA Index, percentage of cells in S phase cycle and differences in the parafibromin and galectin-3 expressions (Table 2). 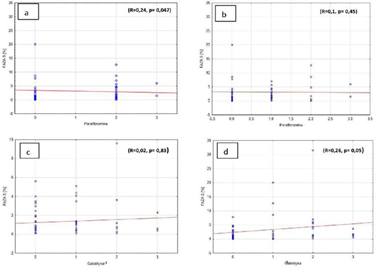 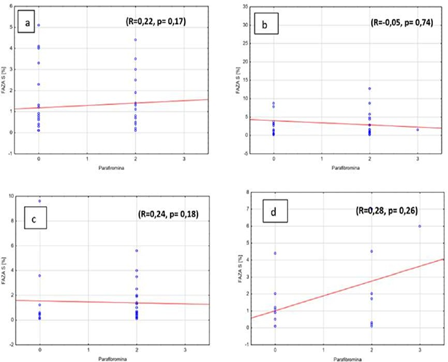 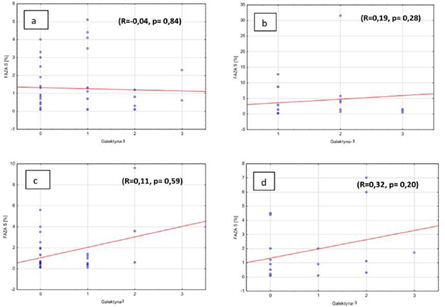 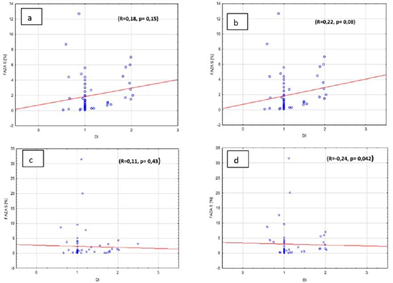 Patients treated surgically for PHPT often due to difficulties in distinguishing between benign and malignant lesions, as well as the heterogeneity of benign lesions, require careful postoperative observation [1]. Some authors believe that most of the singular adenomas are the outcome of monoclonal parathyroid chief cells proliferation and polyclonal hyperplasia [3, 9]. The nature of the cellular ploidy may be an indicator of malignancy, relatively increased activity of the affected parathyroid gland. The DNA Index value may be a helpful indicator in the assessment of patients, who may require more aggressive surgical procedure even in the case of benign lesions, as well as more frequent postoperative checks [10, 11].

In 1990 Obara presented that evaluation of DNA content in the cells of parathyroid tumors will be helpful in diagnosing parathyroid pathologies and predicting malignant potency [10]. In adenomas, in turn, we observed more often aneuploid pathology, higher %S phase than in hyperplasia. Majority of researched samples were diploid (57%). Adenomas were slightly more diploid than aneuploid (55% vs 45%). On the other hand, in the case of hyperplasia diploid changes dominated (65% vs 35%). We did not observed any significant relation between the DI and the type of benign aneuploid tumors (adenoma vs hyperplasia). Other authors have made similar observations [3, 4]. Some authors showed relation between cellular aneuploidy and size of adenoma [10]. Bowlby at all. suggested that aneuploid parathyroid adenomas contain clonal cells, which, if left unattended during the operation, e.g. due to damage to the parathyroid capsule may undergo a malignant transformation in the future [3]. For this reason, all patients with histologically benign, but aneuploid tumors should be closely monitored after the surgery [10]. Due to clonal heterogeneity of cells some authors suggest collecting many samples from one tumor and evaluating DI and %SP from all [11].

Tan was the first to report that the loss of parafibromin nuclear immunoreactivity has 96% sensitivity and 99% specify in diagnosing definite carcinoma [12]. Some also believe that the lack of nuclear reaction with parafibromin is a predictor of higher mortality and higher percentage of complications related to the course of the disease itself [10, 13]. However other authors had different view [14]. On the other hand, when examining benign changes of the parathyroid glands we observed no nuclear reaction with parafibromin in both adenomas (52,7%) and hyperplasia (41,2%). This also applied to aneuploid (50,9%) and diploid (45,8%) lesions.

Many studies show positive correlation between high expression of galectin-3 (Gal-3) in malignant cells and presence of metastasis [15, 16]. Truran at al. informs that 90% of samples of parathyroid carcinoma showed strong expression of galectin-3 (Gal-3) [6]. On the other hand, our study of benign lesions showed 50% adenoma and 35,3% hyperplastic galectin-3 expression. Similar observations regarding expression of galectin-3 were made in the group of aneuploid (47,2%) and diploid (41,7%) lesions. Studies about correlation of galectin-3 (Gal-3) expression and malignancy of parathyroids are not unanimous. Bergero et al. presented a strongly positive correlation between galectin-3 (Gal-3) expression in malignant cells of parathyroid carcinoma (92%), although other authors showed similar results in benign tumors [17, 18]. The use of immunohistochemical panels in diagnosis of parathyroid pathologies increased sensitivity to 79% and specify to 100% [15]. He proved as well, that the majority of adenomas showed expression of parafibromin and no expression of galectin-3 [5, 6]. Kumari et al. proposes usage of parafibromin as negative marker and PGP 9.5 and galectin-3 (Gal-3) as positive marker in diagnosis of malignant tumors [14]. Nevertheless, authors are unanimous that evaluation of one particular marker gives hope for better and more precise diagnosis and that the combination of 2 or 3 markers will increase the sensitivity and specificity of the diagnostic tests to distinguish atypical adenomas with potency for malignant transformations from completely benign tumors [19]. Many studies conclude that use of immunohistochemical studies, especially with using more than 1 marker (panels) can be a precise diagnostic method for differentiation of parathyroid pathologies, although it is still too early to say if this approach will be sufficient [6, 15, 20]. In our work, we also tried to find cut of value for diploid and aneuploid cells in S phase and relate it to absent or present expression of parafibromin and galectin-3. The analysis of ROC curve suggests that with %SP below 1.3 parafibromin expression is basically negative. Although the sensitivity (51%) and specificity (66%) of the study were quite low. Positive reaction for presence of galectin-3 (Gal-3) was observed in specimens where %SP was above 1.4, but also here the sensitivity (43%) and specificity (66%) were low. The percentage of S phase cells above 1.4 is correlated with aneuploid benign tumors (sensitivity 73%, specificity 52%). The results of the research show that it is advisable to conduct them in the hope of creating an individual model of monitoring the diagnosis and treatment of patients with pHPT.