Chilaiditi sign is considered as the interposition of bowels between the liver and right diaphragm radiologically while the symptomatic case is defined as Chilaiditi syndrome. Chilaiditi Syndrome is a very uncommon disorder. Prevalence described varies from 0.25% to 0.28% of the population. There are very few reports reported about association of Chilaiditi syndrome with recurrent abdominal pain in the literature, we report, a patient presenting with acute abdomen and acute kidney injury accompanied by Chilaiditi sign that successfully managed conservatively. Chilaiditi sign should be a differential diagnosis in all patients with air under the right sub diaphragm and prompt recognition by presence of haustrations in hepatodiaphragm can avoid avoidable surgical interventions.

Chilaiditi Syndrome is a very uncommon disorder. Prevalence described varies from 0.25% to 0.28% of the population [1]. Greek radiologist Demetrius Chilaiditi described this first time in 1910. Chilaiditi sign is considered as the interposition of bowels between the liver and right diaphragm radiologically [2] while the symptomatic case is defined as Chilaiditi syndrome. Mostly, patients are asymptomatic, though, clinical presentations vary from abdominal pain, constipation, vomiting, respiratory distress, volvulus and intestinal obstruction [3]. Here, we report a rare case of chilaiditi syndrome in a patient presented with feature of acute abdomen and acute kidney injury due to several factors, such as poor access to hospital, economic constraints of the patient, and poor education regarding health. There are few cases of complications like respiratory distress, volvulus, intestinal obstruction and sepsis have been reported in the literature, but chilaiditi syndrome with acute kidney injury to be reported very less. Thus, we consider that this case will add acute kidney injury to another possible complication of chilaiditi syndrome who was managed by conservatively.

A 65-year old man presented as an emergency with history of abdominal pain for the last five days. The nature of pain was sharp and radiated to the right infra scapular region and shoulder region. He also gives a history of distention of abdomen and three episodes of vomiting since last two days. He had mild, dull aching vague abdominal pain with radiation to back for one year. He has a history of multiple hospital admission for same problem for one year in local hospital. He is taking medication for newly diagnosed hypertension for one month. He had a chronic problem of constipation. He did not have surgery in the past.

On physical examination, he was mildly dehydrated, afebrile with a blood pressure of 100/70 mmHg, pulse rate of 96 beats/minutes and 18/minutes of respiratory rate. He had 98% saturation of oxygen in room air. Abdominal examination revealed distended, hyper-resonant abdomen with mild tenderness over right upper quadrant and epigastrium with no sign of peritonism. Hernial orifices were intact. Bowel sounds were not exaggerated. Digital rectal examination showed no abnormality. His cardiovascular, respiratory and neurological systems were unremarkable. The patient was resuscitated with intravenous fluid (Normal saline). On investigation, white blood cells were 12000 cells/mm3, hemoglobin 12 gm/dL Platelet count 160,000 cells/mm3, serum sodium 145 mEq/L, potassium 3.5 mEq/L, blood urea 86 g/dL, and creatinine 2.0 g/dL. His liver function test was normal. Erect chest X-ray revealed suspicious for free air under his right hemidiaphragm (Figure 1). On ultrasound scan dilated and distended bowel loops were noticed along the course of the colon and hepatic flexure, with suspicion of the abnormal interposition of the transverse colon anterior to the liver. Other abdominal viscera were normal. Computed tomography (CT) of the abdomen showed interposition of bowel loops between the liver and diaphragm (Figure 2 and Figure 3). 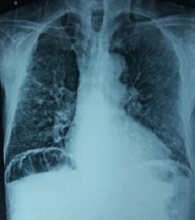 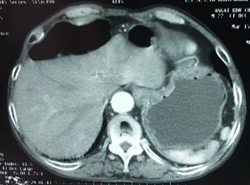 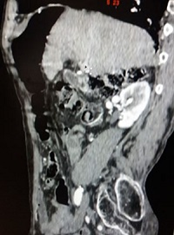 The patient was managed conservatively with a diagnosis of Chilaiditi syndrome. He was kept nil per mouth along with nasogastric decompression and IV antibiotics. He received intravenous fluids and potassium chloride to correct his dehydration and hypokalaemia. Dialysis was planned for acute kidney injury if renal function tests did not improve. But, the next day his renal functions revealed signs of improvement and abdominal distention was gradually decreased. During the course of hospital stay, the patient was comfortable without his admission symptoms and improved without any surgical intervention. Follow-up chest X-ray was performed, which revealed no evidence of gas under diaphragm. The patient was discharged after five days of hospital stay. During a three month follow-up period, his recovery was uneventful.

Chilaiditi syndrome is a rare entity. Incidence is higher in male than female patient (M: F ratio; 4:1) [4]. It is frequently found in aged population, suggesting this illness is an acquired disorder [5]. Generally hepatic diaphragmatic interposition is preserved by normal upper abdominal structure and this disorder may be predisposed by in any hepatic, intestinal, diaphragmatic and other factors that increase the hepatic- diaphragmatic space [6]. Hepatic atrophy due to cirrhosis or a congenital etiology is considered under hepatic factors, diaphragmatic factors include the elevation of the right hemidiaphragm, such as eventration or phrenic nerve injury and congenital aerophagia or an elongated hypermobile intestine is placed under intestinal factors. Other factors are large lower thoracic cavity (chronic obstructive pulmonary disease), raised intra-abdominal pressure (obesity, ascites, and pregnancy ), mental retardation, scleroderma, congenital hypothyroidism, melanosis coli and paralytic ileus. The association of Chilaiditi syndrome and colonic, gastric, pancreatic and pulmonary malignancies, has been reported [7]. Deniz C et al. from Turkey reported coexistence of multiple endocrine neoplasia type 2B and Chilaiditi sign [8].

Chilaiditi sign can be recognized up to 0.3% at plain chest radiography and 2.4% at chest/abdominal computed tomography. The presence of air collection patterns with haustra in plain X-ray chest in the subdiaphragmatic space provides hints to diagnosis. If there is confusion regarding diagnosis, CT scan may be confirmatory [9]. In our case, We detect the colonic haustras in the X-ray film directed to appropriate interpretation of Chilaiditi sign. In most cases, the basis of treatment is conservative and comprises of bed-rest, fluid resuscitation , nasogastric decompression, enemas, high fiber diets and stool softeners [10]. For very limited case, operation may be essential for persistent pain related with intestinal obstruction, intractable ileus and bowel ischemia [11]. Fixation of the interposed viscus or resection may be optimal surgery in most cases. Chilaiditi syndrome associated with volvulus may require urgent surgical intervention with either colectomy or colopexy. Laparoscopic management may another option for treatment [12].

In our case, we suspected the elongation of the colon due to chronic constipation as predisposing factors. Surgeon should be attentive of similar nature abdominal pain and other unspecified presentation of every condition can mimic each other. Chilaiditi sign should be differential diagnosis in all patients with air under right sub diaphragm and prompt recognition by presence of haustrations in right hepatodiaphragm can avoid unnecessary surgical interventions. We could not find out the real cause of this Chiladiti syndrome, which may be limitation of our study. Therefore the present case report highlights the necessity of larger studies with Chiladiti syndrome to find out the actual risk factors in our part of the world.

The authors declare no conflict of interests.

No funding or grant was used for this report.

This is a case report, so exemption has been provided.

Both informed consent and written consent were obtained from the patient.