Even though relationship between rectal bleeding and colorectal cancer has been studied extensively, association between rectal bleeding, haemorrhoids and other pathology remains unclear. Colorectal cancer (CRC) is one of the leading causes of Cancer mortality and morbidity. Although the incidence of CRC in India has increased only marginally, it is now the fifth most common cause of cancer mortality among Indian men and women. In this study we will evaluate role of colonoscopic screening for any colorectal disorder in patients with haemorrhoids in a tertiary care set up.

A tertiary care hospital based, descriptive, cross sectional, observational study carried out over 2 year period. A total of 90 patients were included who were clinically diagnosed with haemorrhoids, patients included were between age of 45-65 years. Colonoscopy was performed, and biopsy was taken from suspicious areas and scopy findings were observed and tabulated.

The analysis of our study was based on the fact that colonoscopies should be performed regularly for screening purposes and not only for evaluating a sign or symptom.

Hemorrhoids are a plexus of dilated arteriovenous vessels that arise from the superior and the inferior hemorrhoidal veins. The prevalence of hemorrhoids in the population is approximately 4%. The peak incidence of both male and female genders occurs from age 45 to 65 years and the main symptoms constitute itching, bleeding, and sometimes fecal soiling. However, rectal bleeding can be caused by a few other abnormalities in the rectum and colon especially in the older age group people, where increasing possibility for adenomas or even cancer can occur. Rectal bleeding can either be a symptom of benign pathology or a sign of colorectal cancer (CRC). This makes it difficult for the general population to decide when to accept haemorrhoids as the cause of rectal bleed and when there is a need for further investigations. Though rectal bleed is more common among the younger age group, colorectal malignancy presents itself usually at ages above 50 years. Therefore, age is an important and most commonly used discriminant in guidelines for colorectal cancer screening. It is hypothesized that a full colonoscopy is necessary in all patients, regardless of the age when it presents with complaints of bleeding per rectum. 50 years is considered the threshold for colonoscopy since the incidence of colorectal cancer, diverticulosis and polyps increases as people get older. Our study was aimed at establishing relationship (if any) between colonoscopy screening and colorectal disorders in patients who present with complaints of rectal bleeds and hemorrhoids in a tertiary care center.

A tertiary care hospital based, descriptive, cross sectional, observational study. The participant general details were obtained such as age, height, weight, BMI, Relevant history, General Examination, Per abdominal examination, Digital rectal examination, Proctoscopy, Colonoscopy. The Hemorrhoids were graded according to Goligher‘s classification . A total of 90 subjects were included with already diagnosed heamorroids between age of 45-65years, during time period from December 2018 to September 2020 were enrolled in the study. Patient with the following alarm signs such as, positive personal history of colorectal neoplasms or Inflammatory Bowel Disease (IBD), positive family history of colorectal neoplasms, History of previous colonoscopy, History of altered bowel habits, recent significant weight loss, presence of iron deficiency anaemia were excluded from the study. 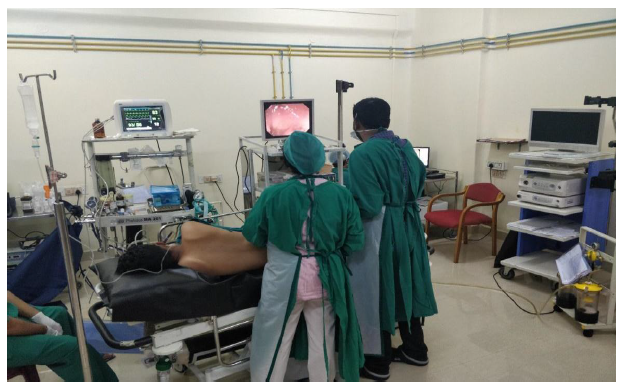 Hemorrhoids are a very common and affect millions of people around the world, and represent a major medical and socioeconomic problem. Multiple factors have been claimed to be the etiologies of hemorrhoidal development, including constipation and prolonged straining. The abnormal dilatation and distortion of the vascular channel, together with destructive changes in the supporting connective tissue within the anal cushion, is a paramount finding of hemorrhoidal disease [1]. Colonoscopy is considered as the gold standard in the diagnosis of diseases of the colon. It has the best sensitivity and specificity for the diagnosis of polyps and is one of the leading reasons for the reduction in deaths from CRC (colorectal cancer) in the United States of America [2]. The first successful colonoscopy was conducted in 1966 by Overholt and Pollard [3]. There are few studies which have evaluated whether screening colonoscopy alone reduces the incidence or mortality from colorectal cancer in people at average risk [4,5,6]. However, several lines of evidence support the effectiveness of screening colonoscopy. There is direct evidence that screening sigmoidoscopy reduces colorectal cancer mortality and colonoscopy allows more of the large bowel to be examined [7]. Colonoscopy has been shown to reduce the incidence of colorectal cancer in people with adenomatous polyps [8,9]. A retrospective review of Mayo Clinic records from a 6-yr period just before the advent of colonoscopy identified 226 patients with colonic polyps, among them Twenty-one invasive carcinomas were identified at the site of the index polyp and their analysis revealed that the cumulative risk of diagnosis of cancer at the polyp site at 5, 10, and 20 yr was 2.5%, 8%, and 24%, respectively [10]. In our study, we did not observe any serious complications such as bleeding and perforation during the procedure. There is great variability in iatrogenic colonoscopy perforation with rates of 0.2 to 0.016% reported for diagnostic procedures, and up to 5% following some therapeutic interventions [11]. In our study, 4% of the patients screened were proved to have malignant lesion thereby confirming our belief that routine screening of patients with bleeding per rectum should be carried out more often. 11% of the patients showed nonspecific findings on biopsy which could be attributed to either inflammatory bowel disease (ulcerative colitis and Crohn‘s disease), idiopathic colonic ulcers or nonspecific colitis. Further confirmatory diagnostic testing would required to arrive at a final diagnosis in those cases. The incidence of colon carcinoma has risen substantially in the past 50 years, more so among males than females [12] and this was the case in our study as well. In a recent Indian study, it was found that out of a total of 212 cases of registered colorectal cancers 113 (53.3%) originated in the colon and other 99 (46.7%) in rectum. Male to female ratio was 1.2:1. The crude incidence rate of colorectal cancer was 3.65/100,000; it was 3.78 in males, and 3.50/100,000 in females [13].  Potential benefits from identifying and removing precancerous lesions would be considerably higher in these patients as has been proved in some studies [11,14].

In our study we observed that colorectal screening performed routinely for patients aged above 50 years can have very favourable results in helping with early detection of colorectal malignancy. Age, gender, obesity negatively influences the clinical course of colon diseases and may increase the burden of disease and treatment. Our results should encourage clinicians to screen patients with symptoms of per rectal bleeding more often before CRC becomes increasingly prevalent in the population because it may help improve not only clinical but also community level preventive outcomes. Our study is a medium scale report of screening colonoscopy results from southern part of India. While it is limited by being a single institution study, it does provide some insight into the results and services being offered to diagnose and treat problems of the lower gastrointestinal tract. It also shows that there are areas where there is room for improvement of this service. However further prospective multi center observational studies will be required to validate our conclusions. Currently used appropriateness criteria for diagnostic colonoscopy increase the yield of relevant findings but lead to a miss rate for relevant findings in the range of 10 to 15%. Simple selection criteria based on age and symptoms could be more suitable and should be tested in a larger group of patients.