Materials and Methods: 180 obese patients of ASA grade II-III received intubation guided by MMVL, were randomly divided into three groups depending on three angulations: 60°, 75° and 90° Angled stylet group (n=60). Airway evaluation indexes were recorded preoperatively, the primary values were first time success rate for intubation, the secondary values included the time to intubation (TTI), the number of cases requiring more than one intubation attempt, and the time required for additional maneuvers. The incidence of airway trauma, sore throat or hoarseness postoperatively were also recorded.

Conclusion: 75° Angulation of the stylet during intubation for the obese with MMVL had the highest success rate and shortest time to intubatation.

Video Laryngoscopes (VL) are popular among anaesthetists as they facilitate tracheal intubation by offering an improved view of the larynx, thus reduce the number of failed intubations [1-3]. McGRATH® MAC video laryngoscope (Aircraft Medical, Edinburgh, UK) provides excellent views of the airway [4], which is superior to the Macintosh in terms of glottic visualization. However, some researchers argue that it extends intubation time and its success rate for tracheal intubation is not excellent [4]. While directing an endotracheal tube could be difficult via McGRATH® MAC video laryngoscope, Lee J [3] and Hwang SM [5] find it is often the curvature of the stylet within the endotracheal tube that creates a challenge when using this VL, as patients with a sound airway evaluation would have issues when it comes to navigating the endotracheal tube into the airway despite of excellent views of the vocal cords and surrounding anatomy [6]. Previous studies showed that bending an endotracheal tube with a distal 60° angulated stylet is superior than a distal of 90° for normal patients [3], as the former had higher intubation success rates and decreased the average time to intubation (TTI).

In obese patients, the incidence of difficult intubation was reported to be twice more frequent in ICU than in the operation room, and severe life-threatening complications related to intubation occurred 20-fold more often in ICU [7], included difficult intubation, severe hypoxaemia, cardiovascular collapse, cardiac arrest, and death. Yumul et al. [8] reported that McGRATH MAC VL (MMVL) and Glide Scope required fewer intubation attempts for intubating obese patients than standard direct laryngoscopy, MMVL also reduced the time needed to secure the airway and improved the glottic view. To date, no studies have been conducted regarding the optimal stylet angulation via MMVL for the obese patients, whether angulation of 60° is superior in the obese patient being in the ramped position remains unknown. Therefore, we designed a randomized trial to identify ideal angulation of stylet for obese patients via MMVL.

This study was approved by the ethics committee of the Affiliated Hospital of Medical College of Ningbo University (xyy16032, 2016). Clinical trial registration number: ChiCTR1800015013. Patients satisfying the inclusion criteria were enrolled from March 2018 to September 2018. Written informed consent from all patients who participated in the study was obtained. The inclusion criteria were as follows: participants scheduled for elective surgery, 18-70 years of age, and a BMI >30 kg/m2. Exclusion criteria included patients with severe cardiac pulmonary disease, a history of facial abnormality, previous oral-pharyngeal cancer or reconstructive surgery, patients who required an awake fiberoptic intubation, emergency operations, pregnant patients, and those with a history of difficult intubation.

The eligible 180 patients were randomly allocated to the 60° (n=60), or 75° (n=60) and 90° (n=60) groups, and our randomization (1:1:1) was based on a computer-generated random number table. Preparation of endotracheal tube (ETT) (fuerte medical equipment limited company, China) performed with a different angulations of the stylets (Sujia medical equipment limited company, China) bent 7 cm from the tip of the ETT. For group A, B, and C the angulation is 60°, 75°, and 90° respectively (Figure 1). Lubricant (paraffine oil) was added to the surface of the stylet and cuff of ETT in order to provide easier advancement of the ETT. 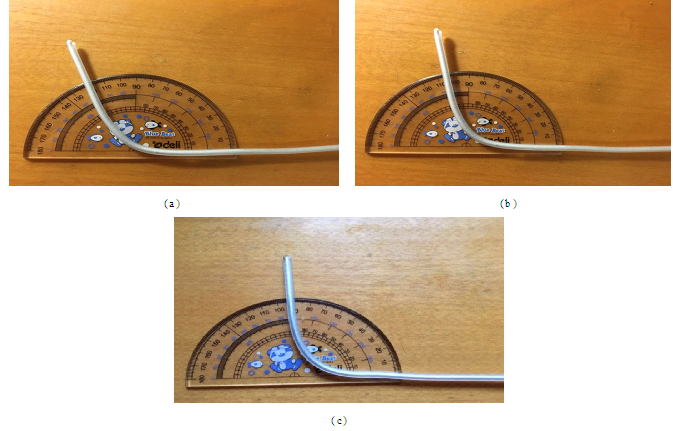 Before entering the operating room (OR) patients received no premedication. Standard monitors were applied once the patient’s entered the OR which included pulse oximetry, electrocardiography, noninvasive blood pressure monitoring, and the bispectral index (BIS) with a BIS Quattro sensor (Covidien LLC, Mansfield, MA). Patients were placed at a 25 degree head-up ramped position, three minutes after preoxygenation, anesthesia was induced with fentanyl 4 ug/kg, propofol 1.5 mg/kg, lidocaine 1.5 mg/kg, and rocuronium 0.6 mg/kg. After induction, the patients were ventilated with 100% oxygen and tidal volumes of approximately 6 ml/kg were achieved. Oral tracheal intubation was performed approximately 2 minutes after rocuronium injection with an adequate neuromuscular blockade. Laryngoscopy was completed in the ramped position. The intubations were performed by 1 of 2 anesthesiologists who both have more than 10 years of clinical experience and had performed at least 60 successful intubations each using the MMVL. The random allocation of three different stylets was completed by the same resident anesthetist in advance, who was blind to the outcome of intubation.

The primary outcome measure was the first time success rate for intubation, the second outcome was time to intubation (TTI), defined as the time from the insertion of the laryngoscope blade into the patient to the detection of end tidal CO2 tracing. A blind observer who was unaware of the patient group and intubation procedure continuously watched from a position behind each patient and measured the time to intubation. If the intubation time exceeded more than 60 seconds or SpO2 became <95%, mask ventilation was applied before the second attempt. The anesthesiologists performing the intubation assessed the laryngoscopic views according to the Cormack and Lehane grade and the percentage of glottic opening (POGO) scale [9]. The secondly outcome measures included success rates of intubation at during the first attempt, Number of intubation>2, the need for extra optimization maneuvers, minor injuries to the lip, teeth, and/or tongue, a blood stained blade and/or tube (suggesting laryngeal bleeding), and sore throat and/or hoarseness. The heart rate, SpO2, and end tidal carbon dioxide (EtCO2) were recorded at baseline and 1 min after intubation.

To estimate the sample size, we assumed a between-group difference of 5 seconds in TTI to be clinically significant; we estimated the TTI mean and SD from previous studies as between 24.7 and 37 seconds and 20.4 seconds, respectively [14]. We calculated the sample size to be 57 per each group, but we increased the size to 60 patients to compensate for potential dropouts and missing data. The analysis was performed using SAS 9.3 for Windows (SAS Institute, Cary, NC, USA). Our dataset contained both categorical and continuous measurements. For categorical for intubation of obese patient measures, we presented a total number (n) with the percentages (%) and used χ 2 tests (or Fisher’s exact test) to conduct the group comparisons. For continuous measures, mean and standard deviation were used. The Mann-Whitney U-test was used to analyze the TTI. For the analysis of heart rate response to intubation, a repeated-measures analysis of variance was used. All tests were two sided and P<0.05 was considered to be statistically significant.

A total of 188 patients underwent intubations during the study period and 180 met inclusion criteria over the course of the study. The 3 study groups were comparable with respect to demographic characteristics (Table 1). Preoperative vital signs were stable and airway evaluation were similar in all 3 groups. The doses of anesthetic drugs and adjuvants administered during induction of anesthesia were comparable in all 3 study groups. All VL devices provide similar glottic views at the time of tracheal intubation as assessed using the Cormack/Lehane score (Table 2). This study showed the endotracheal tube inserted with stylet of 75 degree angulation for obese patient guided by McGRATH® MAC VL had a significantly shorter intubation time (29 seconds (17-33) versus 33 seconds (16-45) and 39 seconds (33-57), P<0.05)) with a higher success rate of intubation (98% versus 90% and 91.6%, P<0.05) than the other two groups. There were no significant complications noted with either of the three stylet angulations, however, the patients treated with the 60° stylet did report a higher rate of sore throat and hoarseness (P=0.026). Finally, heart rate 1 minute after intubation in 90° stylet group seemed higher than the other two groups, but statistical analysis demonstrated no statistical difference (P=0.06). 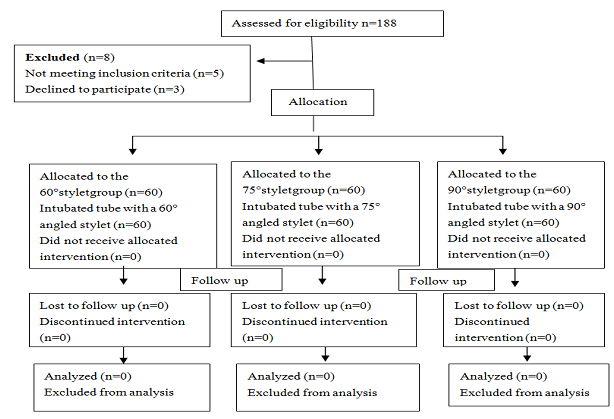 Values are mean (SD) or number

Table 2: Patient intubation profiles and metric, and postoperative complications of the 3 treatment groups.

Values are mean ± SD or numbers; *P<0.05 Compared with baseline

To our knowledge, this is the first randomized controlled clinical study revealing the efficacy of 75° vs 90° and 60° malleable stylet angulation with reinforced ETT under McGRATH® MAC video laryngoscope for the obese. The results of the study showed 75° styletted tube with MMVL provided significantly shorter TTI than other angulations. Previous studies demonstrated McGrath Mac is inferior to other video laryngoscopes like Airtraq [10] but continued to demonstrate an advantage over macintosh laryngoscope in terms of success intubation rate and better visibility [11]. However, laryngeal sighting is just the first step of tracheal intubation, advancing procedure is much more critical as good view does not guarantee smooth intubation [3, 12]. In this study, the median TTI with an experienced anesthesiologist were between 29-39 s, which is comparable with previous studies by Shippey et al. [13] and Lee et al. [3], indicating the obese patients in ramped position have the anatomic axes aligned share the similar intubation condition with normal airway via MMVL. Taylor [12] recommends a 60° angulation as the optimal stylet angulation for the normal patient receiving MMVL but for the obese patients, adipose tissue depositions within the pharyngeal structures could protrude into the airway lumen, resulting in narrowing space of the lumen [13], yet evidence based data for the proper angulation of the stylet in the ETT for the obese is limited. Our study showed that the 60° stylet angulation group required more steering and optimization maneuvers than the other groups for the obese, in most cases the tip of the tube could not pass the posterior of the vocal cord easily, which was possibly due to the comprised height and diameter of each part in laryngeal cavity.

The prevalence of difficult intubations for the obese patient may be upward of 13.2% per the literature and the functional residual capacity (FRC) of the obese patient might decrease to 50% compared with 20% in normal patient after induction [15]. Therefore, it is vital to keep the TTI short to reduce the higher probability of hypoxia and hypercapnia in obese patients. While the POGO scoring in three groups was comparable which was consistent with other studies [8, 16], the number of failed intubation in 75° stylet angulation group was the lowest, as Lee J, et al. demonstrated the distal tip of the 90° styletted tube had a tendency to veer toward the anterior commissure, meanwhile, the distal tip of the 60° styletted tube is more likely to linger around the posterior commissure as discussed above, so it was difficult to advance these two types of tube into the trachea at the vocal cord.

In our study, we found a higher rate of sore throat or hoarseness among patients where the 60° stylets were utilized. Two factors may have contributed to this phenomenon. First, there were two cases of stiffness of laryngeal tissue due to radiotherapy for laryngocarcinoma. Second, our group noticed that there were more optimization maneuvers and more attempts at intubation needed for correct placement of the ETT during intubation which could have easily contributed to the more postoperative sore throat and hoarseness. There is no significant difference in heart rate changes after intubation between all of the groups, which is in agreement with previous research studies. However, one study completed by Caridad et al. demonstrated a greater variation in heart rate during intubation with VL. The study suggests that rather than the curvature of the blade being a factor the most likely cause for this variation in heart rate with VL could be due to a shortened TTI [17-18]. There are some limitations of our study. First, our study did not involve patients with big neck circumference, as this indicator would increase the risk of difficult laryngoscopy and difficult tracheal intubation [19], second, there were two patients with previous radiation treatment history in one group which may add bias to the outcome [20].

Forming an ETT with a distal 75° angulated malleable stylet to be used for intubation with the McGrath Mac VL increased the success rate of intubation and decreased the average TTI without further complications in obese patients.