Cystic Hygroma of the Neck in Adult Patient

Cystic Hygroma is hamartomatous tumor of lymphatic channels, with Most commonly these malformations occur in the head and neck. neonatal and infant more effected and Presentation in adulthood is very rare, we report 25 years old female with diagnosis cystic Hygroma and discuss the presentation, diagnosis and management options for such a presentation.

Cystic Hygroma is benign hamartomatous soft tissue tumor due to malformation of lymphatic channels, It can occur in cervico-facial regions mainly at neck, but can be occure in the head, axilla, groin [1]. In 1834 Wernker give name Cystic Hygroma for this pathology [2]. Cystic Hygroma or Lymphangioma is generally known as a disease of childhood, present as a congenital blockage of lymphatic system, because in this age there is active lymphatic growth. But quite uncommon present in adult age [3]. Presentation in adult age attributes to delayed proliferation of the congenital or acquired lymphoid rests following trauma or preceding respiratory infections [4]. They have no gender predilection, adult cystic hygroma asymptomatic presentation, present as a painless mass that progressively enlarges. Typically, the mass is soft, nontender and fluctuated. Symptoms may develop where it compresses surrounding tissue. There may be obstructive symptoms such as dysphagia, dysphonia, and airway obstruction, however, this is rare in adults [5]. Nearly 150 have been reported in the literature for adult cystic Hygroma, That uncommon adult cystic Hygroma make challenged in its diagnosis and management [6].

A 25-year-old female came to Surgery Department with complaint of painless swelling on left side of neck since 2 years. Patient was asymptomatic 2 years back after which he noticed a swelling in the neck; which was initially single and small and had gradually increased. Patient not complain of dysphagia or dyspnea . Patient did not give any history of trauma or upper respiratory tract infection. On examination, there was a large swelling in the left side of neck measuring 12x 10 cm. The swelling was soft lobulated surface, non-tender, fluctuant, brilliantly translucent extending into both anterior and posterior triangle of the neck (Figure 1). The computed tomography with contrast showed a well-defined non enhancement, lobulated, hypodense, multiloculated thin walled cystic lesion (Figure 2). From history, examination and computed tomography scan radiology findings provisional diagnosis as adult cystic Hygroma.

Transverse incision over the swelling meticulous homeostasis and dissection done (Figure 4) was complete lobulated cystic lesion excision with some adherence to internal jugular vein was released successful, send the specimen for histopathology, small tube draining was done inside residual cavity for one day, patient discharge next day with improve their general condition. The result of histopathology showed collagenous stroma with a dense lymphocytic infiltration, endothelium cell lined wide and large lymphatic channels, that histopathology and clinical examination and radiology findings consists with adult Cystic Hygroma. 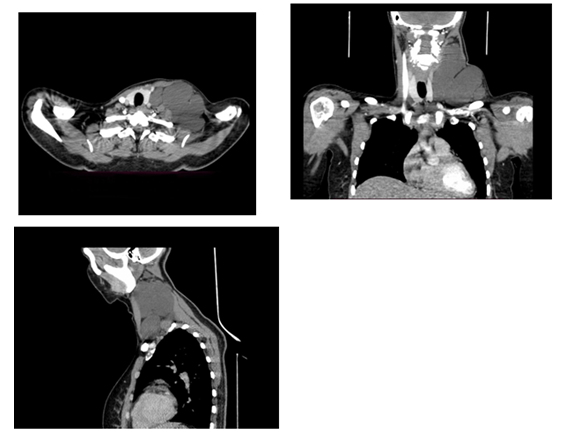 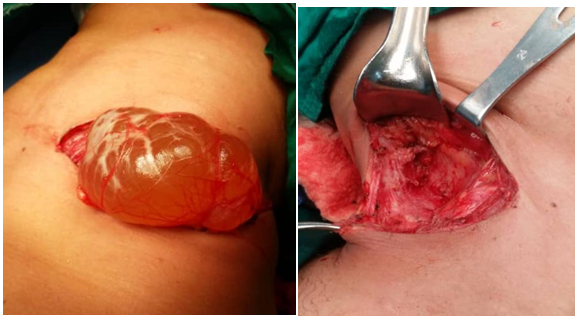 Cystic Hygroma, benign congenital or acquired malformation of lymphatic vessels that result of sequestration of lymphatic tissue that has retained its potential for growth or lymphatic system fails to communicate with the normal jugular vein [1,7]. More than 90% of cystic Hygroma present itself in pediatrics age period, present as a birth defect (congenital) neck swelling rarely became symptoms or present with complication, presentation in adulthood is rare, and the cause controversial or uncertain, but mostly due to delayed proliferation of the congenital lymphatic malformation although trauma and upper respiratory tract infection have both been suggested as possible triggers for the onset [6,8]. In our case painless neck swelling, asymptomatic gradually increase in size and no compression symptoms, this presentation similar to cases report by Gow et al. [6] and Kalsotra et al. [9] they described the most common adult presentation as asymptomatic painless swelling and very rarely compresses major structures of neck such as larynx, trachea, oesophagus, branchial plexus and great vessels. Bhatia, Varsha et al. [10]. In his case, it was described large swelling causing mass effect with patient complaining of difficulty in deglutition and pain in the right ear. Most commonly cystic Hygroma occurs in the head and neck, although they have been described in a variety of other anatomical locations such as axilla (20%), mediastinum (5%), groin, retroperitoneal space and groin [7]. Diagnosis in adults is considered to present a greater challenge than in children, and final diagnosis is usually based on postoperative histology [6]. Our patient underwent neck CT scan and ultrasonography ( USG), show neck swelling in left posterior triangle with extended to left triangle. Morley SE [3] and Karakas O [11] report that neck CT scan and ultrasonography (USG) and Magnetic Resonant Imaging (MRI), it is essential to evaluate neck cystic hygroma and it's intrathoracic extension, which might be seen in 10% of cases. There are many differential diagnosis for neck cystic hygroma in adults like branchial cleft cyst, dermoid cyst, lipomas, hemangiomas, tumours and metastatic disease [6,12]. Although after clinical and radiological examination, the above-mentioned diagnosis may look similar to cystic hygroma but histopathology plays a critical role in differentiating it from others. Cystic hygroma could be classified into septated (multiloculated) or nonseptated single cavity (nonloculated) types [13], our case was septated (multiloculated) cystic lesion. There are three histological subtypes of cystic hygroma- Cavernous lymphangioma is the most common subtype, capillary lymphangioma, and cystic lymphangioma [14]. Our case was of cystic lymphangioma. Total surgical excision was performed in this case. As surgical excision is the best management option for adult lymphangioma or cystic Hygroma. Cystic Hygroma consider difficult to manage due to locally aggressive and recurrence of the tumor following surgery, complete excision of a cystic hygroma has been shown to have an 81% cure rate with a recurrence rate of 18-21%. When only part of a lymphatic malformation is excised, there is an 88% recurrence rate [15]. Saxena et al. [12] described that cystic hygroma might infiltrate in to adjacent structures which can lead to recurrence if complete excision is not done. Different others management options alternatives to surgery for adult lymphangioma or cystic Hygroma, including laser surgery, cryotherapy, electrocautery, steroid administration, sclerotherapy, embolization and radiation therapy [7].

I obtained verbal consent from patient, that was understand like this publishing help to improve medical scientific activities in our country also I explained for the patient that name and identity will not be published.