Introduction: Clostridium Difficile infection (CDI) following restoration of intestinal continuity is uncommon and may progress to fulminant colitis. Fulminant CDI is associated with significant morbidity and mortality. In an unwell patient without clear evidence of an anastomotic leak, surgeons should be aware of the possibility of CDI and institute appropriate management.

Presentation of Case: We report the case of a 71- year-old man, who presented for an elective loop ileostomy reversal after an ultra-low anterior resection for a low rectal cancer eight months prior. The patient deteriorated clinically on post-operative day (POD) 4 and by POD 5 was in septic shock with multi-organ failure. A relook laparotomy confirmed no anastomotic leak and a flexible sigmoidoscopy revealed typical appearance of pseudomembranous colitis. The patient continued to deteriorate in the intensive care unit despite oral and rectal Vancomycin. An abdominal computed tomography (CT)1 on POD 9 demonstrated severe pancolitis and enteritis necessitating surgical intervention. He underwent an emergency subtotal colectomy with an end ileostomy after failing medical management.

Discussion: Many factors have been shown to increase the incidence of Clostridium difficile colonization in the colon including recent hospitalization, antibiotic use, and length of defunctioning beyond six months. The presence of risk factors associated with an increase in CDI such as proton pump inhibitor use, steroid use or immunosuppression and advanced age may allow surgeons to predict high risk patients.

Conclusion: Although rare, fulminant CDI following reversal of ileostomy is a potentially fatal condition. Surgeons should be aware of the risk factors predisposing patients to CDI particularly in a patient with an acute abdomen without clear evidence of an anastomotic leak.

Clostridium difficile is one of the most common hospital-acquired gastrointestinal infections. In 2011, there were an estimated 12,683 cases of hospital-identified CD infections in Australia, at an average of 4.03 infections per 10,000 patient days in hospital [1-3]. The Australian Commission on Safety and Quality of Health Care estimated that 25% of cases are acquired in the hospital setting, resulting in an additional AUD 19,745 cost of each hospital episode. Among patients with CDI 2.2% progressed to severe disease and 0.7% resulted in death [2].

A covering loop ileostomy is commonly fashioned following an oncologic resection of a low rectal cancer, or a creation of an ileo-anal pouch. Reversal of the ileostomy typically occurs in three to six months or if indicated, following completion of adjuvant treatment. It is a common procedure; however, the complications associated with this procedure are often underestimated. A systematic review of 48 studies of 6,107 cases demonstrated a low mortality rate of 0.4% but had a significant morbidity rate of 17.3% [4]. Clostridium difficile infection (CDI) rates after a major intestinal resection were reported between 0.54 to 2.37% and as high as 4.2% post ileostomy reversals in a single centre UK study [5,6].

Here we present a case of fulminant CD colitis following loop ileostomy reversal requiring a subtotal colectomy with no prior history of a CD infection at a tertiary referral centre; in accordance to the SCARE criteria [7].

A 71-year old male with no significant comorbidities, presented for an elective reversal of covering loop ileostomy after an ultra-low anterior resection for a low rectal cancer eight months prior. The patient had no past history of CDI, and received a single dose of intravenous Metronidazole and Cephazolin as surgical prophylaxis intra-operatively [8]. The patient initially progressed well on the ward but was noted to be febrile with a CRP of 217 on POD 4. Clinical examination revealed a soft abdomen that was non-tender, with one episode of fever at 38.2 degrees. Over the course of the next 24-hours the patient developed septic shock with multi-organ failure requiring supplemental oxygen and metaraminol. An exploratory laparotomy performed on POD 5 revealed diffusely dilated small and large bowel with no obvious source of sepsis. However, an on-table flexible sigmoidoscopy demonstrated appearance of pseudomembranous colitis in the sigmoid colon (Figure 1). Oral and per rectal Vancomycin was commenced and patient was transferred to intensive care for further management.

Despite initial clinical improvement with antibiotics, the patient deteriorated and required increasing noradrenalin and vasopressin support as well as continuous haemofiltration. An abdominal CT on POD 9 demonstrated fulminant colitis with pronounced oedema of the entire colon and segments of small bowel (Figure 2). The patient was deemed to have failed medical management and proceeded to a subtotal colectomy with an end ileostomy.

The patient improved rapidly post-operatively and was discharged home ten days later. He was reviewed in an outpatients setting a year later and has recovered well. 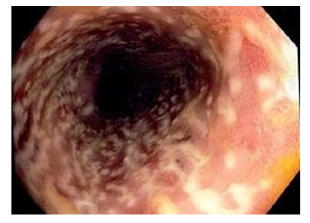 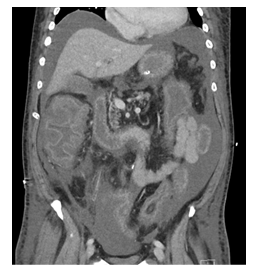 Clostridium difficile infection (CDI) following reversal of diverting loop ileostomy is uncommon. A systematic review of 11 studies that included 13,728 patient found the overall incidence of CDI to be 1.8% of cases (242/13728) [9]. Approximately 3% of CDI however, will progress to fulminant colitis; sepsis with multiorgan failure, peritonitis or toxic megacolon, as was the case with our patient [10]. This carries significant consequences including morbidity of further surgery, and risk of death. Zacharioudakis et al. showed that patients who are colonized with toxinogenic CD on admission have a 5.9x higher risk of CDI than those who are not colonized (21.8% vs 3.4%, RR 5.86, 95% CI: 4.21-8.16). Whilst there is currently no surveillance protocol for CD colonization it is imperative for surgeons to be suspicious of symptoms and to identify high risk individuals [11].

Mucosal and muscular atrophy in a diverted colon has been linked to a change in the microenvironment and microbiome allowing for CD colonization. This may explain the higher incidence of postoperative CDI in individuals who underwent elective stoma reversal compared with colectomy such as anterior resection, right hemicolectomy and appendicectomy (3.04% vs 1.25%; p<0.001) [6,12]. Patients who were hospitalized in the three months prior to ileostomy reversal were 63% more likely to be colonized than those who were not hospitalized (RR 1.53, 95% CI: 1.13-2.34) [11]. Chemotherapy within the previous eight weeks has also been reported as associated with increased CD colonization (OR 2.37, 95% CI: 1.09-5.14) [8]. A multivariate analysis by Rubio et al, showed a significant increase in incidence of pseudomembranous colitis in delayed ileostomy closures beyond the typical six months (p=0.003). This was hypothesised to the increased risk of colonization in the defunctioned colon. Our patient’s ileostomy was reversed at eight months, this may have resulted in an increased risk of CDI.

In addition to risk factors that increase the risk of colonization, several risk factors have been associated with CD infection itself. Antibiotics usage, in particular second/third/fourth generation cephalosporins and clindamycin has been shown in a meta-analysis to have strong association with hospital-acquired CDIs [13]. Limiting their use, unsurprisingly, resulted in a decrease in CDIs [1]. A decrease of prophylactic antibiotic regime from three doses of cefuroxime+metronidazole to a single metronidazole dose reduced the rates of CDI by 5.8% (95% CI: 0.31-12.6 p=0.038) after colorectal resections [14]. In our institution, all patients receive a single prophylactic dose of first-generation cephalosporin (Cephazolin) with metronidazole. There may be a role in rationalising the use of prophylactic antibiotics for surgical wound infections.

Acid suppression with proton pump inhibitors is also a well-documented risk factor for development of CDI where a gastric microenvironment with pH >5.0 is attributed to the increased survival of vegetative clostridium spores, increasing the incidence by 65% (Risk estimate 1.69, 95% CI: 1.39-1.96) [15,16]. Other risk factors predisposing surgical patients to post-operative CDI shown in regressional analysis in studies include; age >65, female sex, smoking, disseminated cancer, haematologic malignancy and steroid/ immunosuppression [2,8,12]. Age above 65 was the only risk factor present in our patient.

CDI after ileostomy reversal is uncommon but carries a 3% risk of progressing to fulminant colitis with significantly higher morbidity and mortality. Risk factors associated with an increase rate of colonization are also associated with CDI post-operatively. Currently, there is a lack of high quality studies to recommend routine pre-operative testing of C. difficile colonization in high risk patients. However, surgeons should be aware of this rare but fatal condition when managing a septic patient without a clear source, following restoration of intestinal continuity.

The authors have no conflict of interest to declare.

No source of funding

This case report did not require ethical approval, as it was exempt at our institution

Written informed consent was obtained by the patient for publication of this case report and accompanied images. A copy of the written consent is available for review by Editor-in-Chief of this journal upon request.