Background: Cystic echinococcosis (CE) is a zoonotic parasitic disease caused by the larval stages of the cestode Echinococcus granulosus. It is a significant public health problem with high endemicity in east and central Africa including Sudan. Worldwide, pulmonary echinococcosis cyst is a significant problem medically, socially, and economically. Until now ten genetic variants, or genotypes designated as (G1-G10), are distributed worldwide based on genetic diversity. In this study we aimed to investigate molecular diversity of Echinococcus granulosus isolates collected from human clinical samples removed surgically from lung using mitochondrial gene nad1 in Sudan.

Methods: Seven human echinococcosis cysts originated from lung were collected through surgery from ElShaab Teaching Hospital in Khartoum state during 2016-2018. The fertility of cysts was detected microscopically by examination of the cysts fluid in which the protoscoleces were found. Protoscoleces were removed from each cyst and their total genomic DNAs were extracted. PCR was performed to amplify fragments of 530 base pair (bp) forNADH dehydrogenase subunit 1(NADH-1) gene. The amplified PCR products were purified and subjected to direct sequencing for subsequent construction of phylogenetic tree and network analysis.

Conclusions: According to the results of the previous and present observations which has been performed by PCR only and PCR followed by sequencing respectively, it can be concluded that the pul echinococcosis in Sudan are caused by genotype 6 (G6) camel strain of E. granulosus, which indicates the camel-dog cycle in the studied area.

Cystic echinococcosis, caused by the metacestode of Echinococcus granulosus, is one of the most common zoonotic diseases associated with huge economic losses and great public health significance worldwide [1]. Dog and other carnivores that harbor the adult cestode in their small intestine are the definitive hosts for the parasite, while a wide range of mammalian species including domestic animals and man act as intermediate hosts [2]. The metacestode stage of E. granulosus inhabits the liver, lungs, and other internal organs of livestock and humans after oral uptake of the eggs, which are produced by adult worms in the canine small intestine [3,4]. Humans can be accidently infected by ingesting its eggs, which results in human cystic echinococcosis (CE) or hydatidosis [5]. CE may develop silently over years and even decades until it surfaces with clinical signs or symptoms. Clinical symptoms are mainly related to the localization, size and number of cysts. However, a recent study described that there seemed to be a relationship between the genotypes and the size of hydatid cysts, in which all the patients infected with G7 genotype showed smaller liver cysts than those infected with G1 genotype. CE is an important and sometimes life-threatening disease, which mostly affects lungs and liver, but other organ scan be also affected [6]. Fatal cases of human CE have been reported with inoperable CE cysts of the brain and anaphylactic shock caused by rupture of liver hydatid cysts [7]. In the Sudan, many reports of cystic echinococcosis have been described in humans and animals [8]. In addition to its importance as a major public health problem in the country, CE is also considered as one of the major causes of condemnation of sheep carcasses during meat inspection. Different genotypes of E.granulosus have been identified from a variety of hosts worldwide. Until now, 10 genotypes(G1-G10) has been described [9]. The genotypes are different in some criteria such as pathogenicity, host specificity, pattern of life cycle, transmission dynamics and developmental rates, human infectivity and response to chemotherapeutic drugs [10]. Of the ten genotypes of EG, the sheep(G1), the cattle (G5) and the camel (G6) strains were reported in humans and livestock in the Sudan [11,12]. The epidemiological situation in Sinnar area, Blue Nile state is characterized by intense transmission of Echinococcus canadensis(G6), thereby closely resembling the situation in most other regions of Sudan [13]. This study aimed to investigate genotypes of the echinococcosis cysts isolated from echinococcosis patients from different parts of Sudan. Echinococcosis cysts were defined by genetic studies and subsequent phylogenetic analysis. The molecular characterization was made possible by targeting fragments of the mitochondrial NADH 1 to define the circulating genetic variants in the different part of Sudan.

A total of 7 Echinococcus cysts were collected from 7 patients suffering from pulmonary CE. All patients came from different parts of Sudan and were operated surgically at Al-Shaab hospital. The cysts were preserved separately in 70% ethanol and formalin.

Cysts or cyst material were examined microscopically toconfirm whether or not they are hydatid cysts. Fertility of the collected Echinococcus cysts was assured by detection of protoscolices in aspirated fluid samples.

Genomic DNA was extracted from sediment positive for protoscoleces using GF-1 Blood DNA Extraction Kit (Vivantis) according to manufacturer’s instructions. Briefly, 200 μl of the suspended aspirate, 20 μl of proteinase K stock solution, and 200 μl of lysing buffer were pipetted into 1.5 ml eppendorf tube. The mixture was incubated at 65°C for 10 min before the addition of 200 μl of absolute alcohol and mixing by vortexing. The mixture was then transferred to the spin column placed in a clean 2 ml collection tube and centrifuged at 5000 RPM in MiniSpin centrifuge (Eppendorf, Wesseling- Berzdorf, Germany) for 1 min at room temperature. The spin column was washed twice with 500 μl of the washing buffersand centrifuge at 5000 RPM for 1 min and the DNA was eluted in 100µl of buffer and was stored at 4 ° c until further use in PCR analysis.

2.3.1 Selection of primers: The primers were selected from mitochondrial NADH dehydrogenase subunit 1 (NADH 1) gene. The NADH 1 primers used in this study were basically described previously (Bowles J and McManus DP, 1993). For the first amplification step, a pair of outerprimers JBl1: 5' AGATTCGTAAGGGGCCTAATA 3' andJB12: 5' ACCACTAACTAATTCACTTTC 3' were used toamplify a 530 bp PCR product from EG isolates. A pair of internal sequencing primers JB11.5: 5' TTATGGTAGATATTATAG 3' and JB12.5: 5' CACACACATAAAACAAGC 3' designed to conserved segments of the EG NADH1 sequences, were used to generate a 471 bp PCR product

A stock buffered solution containing 150 μl 10x PCR buffer, 100 μl of 25 mM MgCl2, 12.5 μl of each dATP, dTTP, dGTP and dCTP at a concentration of 10 mM was prepared in 1.5 ml eppendorf tube. The primers were used at a concentration of 20 pg/μl, and double distilled water was added to bring the volume of the stock buffer solution to 1.5 ml. Each 0.5 ml PCR reaction tube contained 2 μl of the primers, 1 μl (5.0 U) of Taq DNA polymerase (Vivants), 5.0 μl of the target DNA and 42 μl of the stock buffered solution. For nested PCR, 2 μl of the primary PCR product was used as DNA template. The thermal cycling profiles were as follows: a 2 min initial incubation at 95°C, followed by40 cycles of 95°C for 1 min, 55°C for 30 sec and 72°C for 45 sec, and a final incubation at 72°C for 10 min. Thermal profiles were performed on a Techne TC-412 thermal cycler (Techne, Staffordshire, UK). Following amplification, 15 μl from each PCR containing amplified products wereloaded onto gels of 1.0% agarose and electrophoresed for 1 h. The gels were stained with ethidium bromide and the PCR products were easily identified following visualization under UV light.

The sequences obtained from the PCR products were sent for sequencing to commercial company (Macrogen, Seoul, Korea). Resulted sequences were edited and aligned using BioEdit software (Ibis Biosciences, Carlsbad, CA, USA). The Basic Local Alignment Search Tool (BLAST) of NCBI (National Centre for Biotechnology Information, Bethesda, MD, USA) was used to confirm the identity of the generated sequences in relation to GenBank nucleotide database. The sequences then aligned with the corresponding region of NADH1 subunit gene of known genotypes from other countries. All sequences were submitted to the GenBank (accession numbers MW660881 to MW660886). The phylogenetic tree was constructed using Neighbor joining tree implemented in MEGA software version 7.

The sequences obtained from the PCR products were found to aligned and compared with corresponding regions for NADH1 gene in the GenBank confirming the cysts to contain the EG complex, using BioEdit and also the BLAST program of GenBank. All sequences were submitted to the GenBank (accession nos. MW660881 to MW660886). Genotype identifications were in complete agreement for all isolates. Blast search of the obtained sequences derived from human isolates indicated the occurrence of G6 genotype (E. canadenesis) in all isolates. Presence of nucleotide substitution at position 16282(A to C) was detected among 2 strains with G6 genotype when compare to reference strain NC_044548.1 (complete genome), also found other substitution at position 7579 (G to C) in that same 2 strains when compared to reference strain NC_038227.1(G6 strain) (Figure 2). Among all the strains with G6 genotype, substitution at position 16132 (C to G) was observed in compare to reference strain NC_044548.1 (complete genome) and NC_038227.1(G6 strain) (Figure 3). The phylogenetic analysis of concatenated sequences of nad1gene showed thatall strains related to G6 genotype (Figure 4). Moreover, reference sequences for G6 genotype available in the GenBank, were included in the comparative analysis. 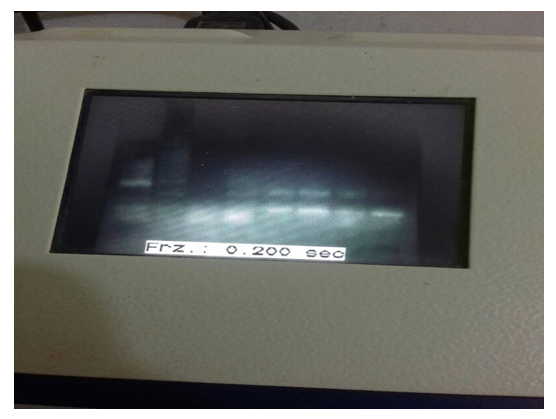 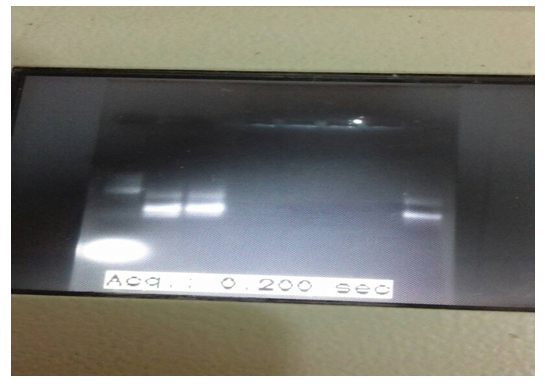 Continued figure (1): nested PCR product for sample 6 and 7 were positive 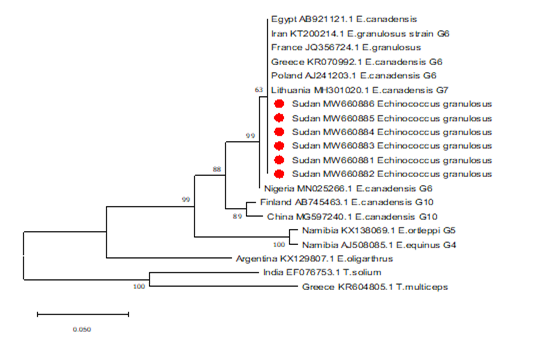 Partial NADH dehydrogenase subunit 1 gene sequences generated from EG isolates were aligned with sequences of other EG isolates from different parts of the world. Sequences were analyzed with the BioEdit software (Ibis Biosciences, Carlsbad, CA, USA). The phylogenetic tree was constructed using neighbor joining tree implemented in MEGA software version 7. Bootstrap values were calculated from analysis of 1000 replicates of the data set, and values greater than 50% are indicated at the appropriate nodes. Each EG isolate is designated by country of origin, GenBank accession number and the genotype of the isolate when available. The GenBank accession numbers (MW660881, MW660882, MW660883, MW660884, MW660885 and) were given for the Sudan isolates of genotype 6 (E. canadensis). The strains from Sudan those described in this study are highlighted in red color for clarity. T.solium and T.multiceps were used as the out group sequence data.