Background
Effective physician-patient communication is a key component of the therapeutic relationship. Recently, virtual reality has emerged as a novel communications tool in healthcare.

Methods
Forty-seven consecutive patients were prospectively surveyed for their pre-surgical consultation experience that incorporated 360°VR renderings created from patient-specific cross-sectional imaging. Patients anonymously completed an online questionnaire that used a 5-point Likert scale or a 10-point value scale (1 = “no value” to 10 = “highly valuable”) regarding their 360°VR and prior consultations. Wilcoxon Signed Rank Test was used to compare responses for prior versus 360°VR consultations.

Conclusions
The 360°VR consultation improved patients’ perception of how well their surgeons communicated with them as well as their overall satisfaction with the pre-surgical consultation.

Proper patient education regarding complex neurosurgical conditions can be particularly challenging. While various methods have been proposed and trialed in the past, advancement in display technology has allowed the possibility of supplementing verbal information with visual information to improve understanding and retention of medical information by patients [4,5]. In recent years, virtual reality (VR) has emerged as a promising tool in science and medicine [6]. The technological advancements of VR have made it increasingly affordable and accessible, and its applicability as a medical tool is gaining wide acceptance in the medical community. VR is being developed for a wide range of applications in healthcare including preventive medicine and patient education [7], medical therapy and rehabilitation [8,9], medical education and training [10-14], and surgery [6,15-17].

The Surgical Theater Precision VRTM visualization platform is one such technology capable of creating personalized, custom 360-degree VR (360°VR) models from high-resolution cross-sectional imaging within a few minutes. These 360°VR models can be manipulated and viewed at any angle at high resolution, and by using VR headsets, the 360°VR models can be viewed in an immersive VR simulation.

For neurosurgery, 360°VR technology enables interactive planning and simulation of neurosurgical procedures that can be utilized in educational and clinical applications [12,14-17]. Pre-operative rehearsal with 360°VR has been shown to increase safety and efficiency of aneurysm clipping [17]. Use of VR for pre-operative planning and intra-operative guidance have also been proposed.

Here, we aim to assess the potential impact of 360°VR visualization on patient communication, patient education, engagement, and satisfaction. To our knowledge, this is the first report of enhanced patient education, engagement, and satisfaction as a result of immersive VR technology incorporated into neurosurgical consultation.

Institutional Review Board approval was obtained (UCLA IRB#17-000402) to conduct a prospective anonymous patient survey study. All new-patient evaluations for operative cerebrovascular conditions in one neurosurgeon’s outpatient clinic over a 6-month period were screened for inclusion in this study. Prior to consultation, 360°VR renderings of magnetic resonance imaging (MRI) and/or computed tomography (CT) images were generated using proprietary software included with the Surgical Theater Precision VRTM visualization platform. MR angiography and/or CT angiography studies were used (Figure 1). Patients with adequate high-resolution cross-sectional imaging underwent neurosurgical consultation with the use of 360°VR, and at its conclusion, patients were recruited for participation in this study. Patients were asked to complete an anonymous survey (Supplemental Figure 1) after the neurosurgeon had exited the room by a study coordinator, and the neurosurgeon was blinded to patient participation and responses. Patients were told that neither the participation in the survey nor the individual responses would have any impact on the care of patient. Verbal consent was obtained prior to administering the survey. A legal guardian or next-of-kin was asked to complete the survey if patients were mentally unable to participate in the study, or under the age of 16. No patient had previously attended a VR-facilitated consultation.

A 5-point Likert scale (1 = “strongly disagree” to 5 = “strongly agree”) was used for all questions, except for one question in which patients were asked to rate the value of the 360°VR experience on a 10-point scale. For the 10-point scale question, the mean rating ±1 standard deviation was calculated. 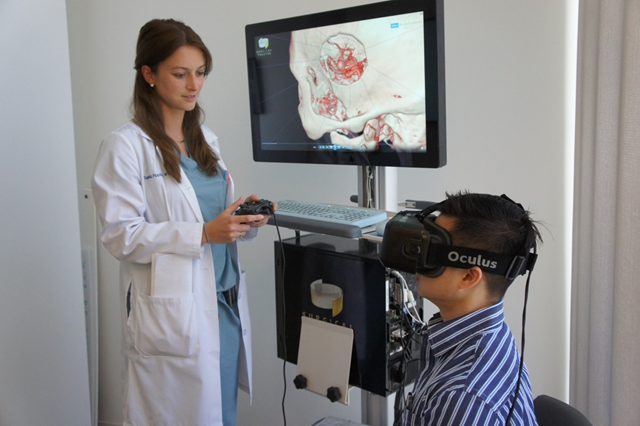 A: An example of a high resolution cross-sectional study that was used to construct a 360°VR model.

B: The resultant 360°VR model of the CT angiography can be viewed from any angle.

C: The 360°VR model can be manipulated to reveal certain cross sections

D: The 360°VR model can be used to show only the vascular anatomy.

E: In clinic, a patient can wear the VR headset (left) and be guided by the neurosurgeon during the consultation to view his own neurosurgical anatomy (right).

All patients who presented as new consultations utilizing the 360°VR technology (Figure 1) were screened for inclusion in this study, and of those who were screened, all 47 patients (100% of those who were eligible) consented to participate in this study (Supplemental Figure 1). None of these patients experienced the 360°VR technology in a clinical setting before. Table 1 summarizes the demographic information of the 47 respondents. 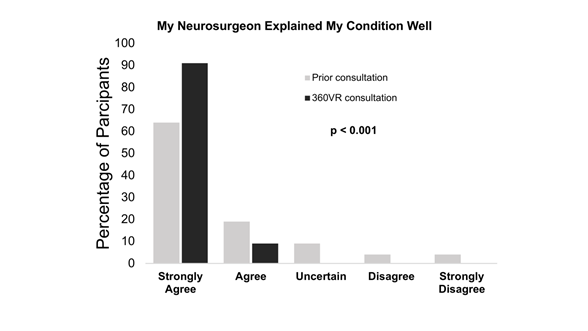 Figure 2: Comparison of Neurosurgeon’s Communication in Prior versus 360°VR Consultation

Table 2: Comparison of Patient Communication and Satisfaction in Prior versus 360°VR Consultation. 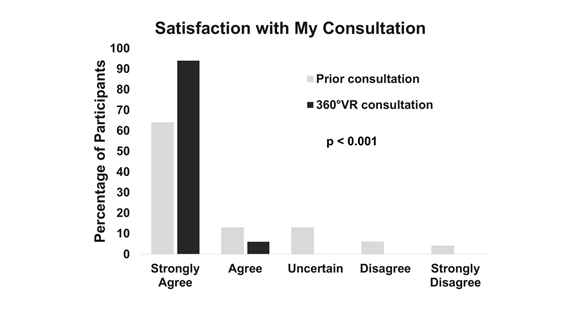 Figure 3: Comparison of Patient Satisfaction in Prior versus 360°VR Consultation

Patients were also surveyed more specifically on their 360°VR experience with the following three questions: 1) “Experiencing 360°VR images helped improve my understanding of my medical condition,” 2) “Experiencing 360°VR images helped improve my comfort level with my proposed management option,” and 3) “How would you rate the value of seeing your images using 360°VR?” All patients either strongly agreed (94%) or agreed (6%) that 360°VR helped improve understanding of their medical condition (Table 3). Similarly, 91% strongly agreed, and 9% agreed, that the 360°VR experience helped improve their comfort level with the proposed management options. Importantly, patients rated the value of experiencing 360°VR highly with a mean score of 9.79 ± 0.51 (1 standard deviation) on a scale of 1 to 10, with 1 being “no value” and 10 as “highly valuable” (Table 4).

Table 3: Impact of 360°VR on patient understanding and comfort with management options.

To assess shared decision making from the patient’s point of view, patients were asked whether or not they agreed with the following statements: 1) “My surgeon and I thoroughly weighed the different management options today,” and 2) “My surgeon and I selected a management option together.” For the former statement, 85% strongly agreed, and 15% agreed (Table 5). For the latter statement, 81% strongly agreed, 15% agreed, and 4% were uncertain.

Patient-centered care has become a principle focus of healthcare as growing evidence shows that orienting care around patients’ needs and preferences has the potential to not only improve patient satisfaction but also has a positive effect on clinical outcomes [18-21]. In 2001, the Institute of Medicine named patient-centered care as one of the six fundamental aims of the United States of America (U.S.) healthcare system [22]. Moreover, the economic value of patient-centered care is increasingly being recognized as the healthcare landscape in the U.S. is transitioning to a value-based payment system, in which reimbursement is tied to patient experience and satisfaction [23]. Specifically, the Centers for Medicare and Medicaid Services (CMS) Value-Based Purchasing Program places emphasis on Hospital Consumer Assessment of Healthcare Providers and Systems (HCAHPS) survey, which scores hospitals solely based on patient experience. In the present study, a patient-centered care approach is taken to educate and engage patients using a 3D virtual reality visualization platform (360°VR) during neurosurgical consultations for complex cerebrovascular and brain tumor pathologies. As a result, patients reported that compared to prior consultations, the neurosurgeon using the 360°VR technology explained their medical condition better, and reported higher level of satisfaction with their overall neurosurgical consultation. Patients also found that the 360°VR experience improved their understanding of their medical condition, as well as their comfort level with the proposed treatment options. These reported outcomes suggest that the 360°VR consultation may help patients be better informed about their medical condition and experience less anxiety and apprehension about the proposed treatment option. Patients also expressed that they felt more involved in a shared decision-making process during their 360°VR consultation, with 85% strongly agreeing that they thoroughly weighed the different treatment options with the neurosurgeon. Consequently, 96% of patients agreed that they selected a treatment option together with the neurosurgeon. More involvement in a shared decision-making process may reflect more comprehensive understanding of the proposed treatment plan and has been associated with overall satisfaction with provided care24-26. Furthermore, shared decision making has been shown to enhance patient-centered care along with patient safety and is considered a part of value-based care in the U.S. [27]. There are several limitations to this study that should be addressed. First, the exciting nature of VR and a new technology in this space may have influenced the positive feedback from patients. Second, satisfaction and physician communication ranks for the 360°VR consultation were compared to the ranks for previous consultations. The number of prior consultations ranged from one to six or more, and thus, a variety of different neurosurgeons were involved. However, their differences were not accounted for in this study. Recall bias, at least, could not be controlled in this study. Our study is the first to address the question of whether allowing a neurosurgical patient to see in 3D not only the complex anatomy of their own neurosurgical disease but also the specific surgical approach, would facilitate patient education, increase the perception of shared-decision making with their surgeon, and increase overall satisfaction with their pre-operative satisfaction. It adds to the existing literature that the VR platform when used in the neurosurgical setting may increase patient satisfaction experience in general, even when it doesn’t involve surgical planning and explanation of anatomy. For instance, The Thomas Jefferson University Hospital performed a randomized controlled trial in which patients watched a VR video describing the pre-operative and the postoperative experience on the day of the surgery using actors, real physicians and nurses [30]. The authors found that patients who were exposed to preoperative VR reported increased satisfaction and less anxiety. In addition to improving patient experience which can translate to mproving patient-centered care outcome measures such as the HCAHPS scores used by the CMS, the VR platform also has the potential to improve rates of surgical conversion and patient retention28. The VR platform can also play an important role in increasing patient retention rate, which is the percent of patients who were recommended surgery in clinic that eventually underwent surgery with the same surgeon. For example, two recent studies have demonstrated a high patient retention rate using 360°VR consultations: 91% (29 out of 32) and 96% (81 out of 84) of patients who received 360°VR consultations enrolled in surgery at Mount Sinai Hospital and Hoag Memorial Hospital Presbyterian, respectively [28,29]. In the latter study, the authors found that prior to 360°VR consultations, the retention rate was only 64%, which increased to 96% after patient-specific 360°VR platform was utilized in clinic. As more evidence accumulates, the role of VR in improving patient retention rate may become more prominent. Future studies on the role of VR in surgical patient care will likely become both more comprehensive and granular in approach. For example, randomized controlled studies can be performed within the same institution and by the same group of surgeons to assess the level of patient comprehension of their surgical disease, the disease anatomy, their perception of level of their own contribution to shared-decision making, their pre-operative anxiety, and post-operative satisfaction of the overall experience of patient care. This can be done by exposure to the VR platform in multiple settings in multiple sessions with both physicians and nurses, in the form of VR display of patient’s surgical disease anatomy, using VR to explain the surgical approach, playing a VR video of what to expect on the day of the surgery that use real hospital locations, and finally what to expect postoperative during the recovery period. As the VR platform gradually becomes more integrated into existing patient care experiences, surgical departments and hospitals may begin to incorporate it into their standard practices as they see its value in potentially improving the overall patient experience in a cost-effective manner.

Patient consultation with 360°VR appears to augment the patient-centered care approach, by helping to bridge the communication gap between neurosurgeons and patients. Results from this study indicate that 360°VR consultation may help patients better visualize, and thus conceptualize, their pathology and proposed surgical procedure, thereby enhancing patient understanding, engagement, and overall satisfaction.