Incidence of Neoplasms after Appendectomy in a Cohort of 1197 Patients

Citation: Stravodimos C, Greiber A, Riemenschneider F, Popp A, Schön MR, Justinger C. Incidence of Neoplasms after Appendectomy in a Cohort of 1197 Patients. Journal of Surgery and Research 4 (2021): 72-79.

Objective: Appendectomy is the gold standard in the treatment of acute appendicitis. The objective of this study was to investigate the incidence of unexpected histopathological findings after appendectomy in a large cohort of patients.

Methods: We retrospectively analyzed the demographic and histopathologic data of 1197 patients, who underwent an appendectomy in order to treat an initially diagnosed acute appendicitis between January 2012 and December 2017. Patients undergoing an appendectomy during other surgical procedures as well as patients under 18 years of age were excluded from the study.

Results: Out of 1197 patients in total who underwent an appendectomy, 1124 (93.9%) received a laparoscopic procedure and 73 (6.1%) underwent a conventional appendectomy. The obtained specimen presented with the following histopathological findings: 103 (8.6%) cases of catarrhal inflammation, 722 (60.3%) cases of suppurative acute appendicitis and 217 (18.1%) of gangrenous acute appendicitis. Furthermore, in 28 (2.3%) cases there were unexpected histopathological findings. Here, neoplasms were found in 25 (2.1%) cases: 16 cases of LAMN (low grade appendice

Conclusions: Unexpected histopathological findings in appendectomy specimens including neoplasms are not rare (2.3%). Histopathological assessment allows early diagnosis and treatment of these incidental findings.

Appendicitis is one of the most common causes in patients admitted to the emergency department with lower abdominal pain [1, 2]. The lifetime prevalence is 8.6% for males and 6.7% for females [3]. The prevailing cause leading to an inflammation of the appendix is the luminal obstruction. Provoking factors can be fecalith plugs, lymphoid hyperplasia, as well as other causing clinical symptoms and leading the patient to the emergency department [4]. The therapy of choice remains the laparoscopic or open appendectomy, allowing the subsequent histopathological examination of the specimens [4]. In the vast majority of cases, the operation leads to a fast and full recovery of the patient with low morbidity and mortality. In the recent years though, there is an open discussion regarding whether the antibiotic treatment and its effectiveness may be an alternative healing approach in case of uncomplicated acute appendicitis [5, 6]. However, underestimated causes for acute appendicitis are the appendiceal neoplasms including malignant diseases. Most of them are diagnosed unexpectedly after appendectomy for acute appendicitis. The number of these incidental findings including mucinous neoplasms, carcinoid tumor, adenocarcinoma, granulomatous diseases, enterobiasis, taeniasis, ascariasis, diverticulitis, primary or secondary adenocarcinoma, lymphoma and neurogenic appendicopathy is unclear, but is relevant due to the large number of appendectomies being performed.

In addition, the incidental finding of a malignant neoplasia can have considerable consequences for the patient´s prognosis and the further treatment strategy.

This study was designed to investigate the incidence of unexpected appendiceal neoplasms after appendectomy in a large cohort of patients undergoing surgery due to acute appendicitis.

We retrospectively analyzed the demographic and histopathologic data of 1197 patients, who underwent appendectomy to treat an initial diagnosis of acute appendicitis at the Karlsruhe State Hospital between January 2012 and December 2017. Patients, undergoing appendectomy during other surgical procedures  as well as patients under 18 years of age, were excluded from the study.

Surgical treatment was performed as open or laparoscopic appendectomy.

Tissue from surgical resections was fixed in formalin. Representative samples were collected from the fixed tissue. The sections were stained with haematoxylin and eosin (HE) and mounted on microscope slides using standard techniques.

Between January 2012 and December 2017, 1197 patients with clinical signs of an acute appendicitis were treated at the Department of Surgery of the State Hospital Karlsruhe. The patient´s characteristics are shown in table 1.

Table 1: Characteristics of 1197 patients who underwent appendectomy between January 2012 and December 2017.

Intraoperatively, one hundred eighty-seven patients (15.6%), showed a perforation of the appendix and 67 of those showed a generalized peritonitis. 1124 (93.9%) operations were performed laparoscopically and 73 (6.1%) patients underwent a conventional appendectomy. 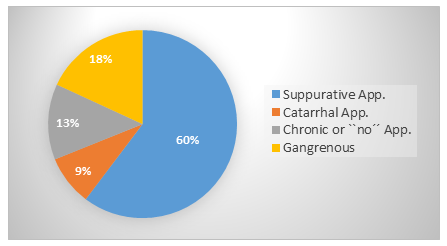 Figure 1: Histological type and severity of acute appendicitis of the 1197 patients.

3.2 Neoplasms of the appendix

Neoplasms were found in 25 (2.1%) cases (Figure 2): 16 cases of LAMN (low grade appendiceal mucinous neoplasms), 7 neuroendocrine tumors, 1 lymphoma, 1  adenocarcinoma. The characteristics of the patients with neoplasms are shown in table  2. Statistically there was no significant difference between male and female patients and  most patients were classified ASA II (9), with a mild systemic disease.

Figure 2: Histologic types of unexpected neoplasms of the appendix.

Table 2: Characteristics of the 25 patients with unexpected histopathological findings after appendectomy.

Nineteen of the patients with appendiceal neoplasms were admitted with clinical symptoms of an acute abdomen, while all patients showed intraoperative signs of an acute appendicitis.

Acute appendicitis is one of the most common causes leading patients with abdominal pain to emergency departments [2-10]. The lifetime prevalence is 7% and appendectomy is one of the most common  performed operations worldwide   [3-11]. In Germany about 130.000 appendectomies are performed annually, with our department performing about 200 each year [12]. The lifetime incidence of appendicitis for males is estimated to be 8.6% and 6.7% for females, while the incidence of appendectomy for females is estimated around 12% and for males 23% [13, 14, 15].

Appendicitis is diagnosed and the indication for surgery is based on the patient’s medical history, clinical examination and laboratory findings. A helpful diagnostical tool is the abdominal ultrasound, and sometimes the computed tomography, the magnetic resonance tomography and the diagnostic laparoscopy [17, 18]. This allowed a reduction of diagnostical errors and enabled an optimized therapeutical approach regarding the underlying cause of the disease. Nevertheless, the rate of appendectomies in which no signs of inflammation are found in histological specimens are estimated to be between 9% and 35% [13, 14, 15, 16]. In the current study 12.9% (155 patients) of the appendiceal specimens showed no signs of acute appendicitis or signs of a chronic appendicitis.

While surgery with the resection of the inflamed appendix is the standard therapy for acute appendicitis, there is an increasing discussion, whether the antibiotic treatment and its effectiveness could be an alternative treatment in case of uncomplicated acute appendicitis [5, 6]. Various arguments certainly play a role in the discussion about the conservative therapy of appendicitis. Even though appendectomy is a safe standard procedure, every surgical procedure is associated with a certain morbidity and mortality (in hospital mortality of appendectomies in Germany: 0.2% [19]). Arguments for the surgical therapy of acute appendicitis are the recurrence rates after a conservative treatment (approximately 15%) [20]. Furthermore the results presented in this study should be taken into account. In our study population, 25 patients were diagnosed with unexpected appendiceal neoplasms (2.1%).

The majority of these patients presented with typical signs of an acute appendicitis. It is remarkable, that appendiceal neoplasms were found in patients of all ages. This is important, as the unexpected histopathological findings might pose a therapeutic challenge. In literature appendiceal tumors have been reported in <3% of all appendectomy specimens [21]. In the current study 25 patients with appendiceal neoplasms (2.1%) were detected. All patients showed intraoperative signs of an acute appendicitis. In the following, the histopathological findings are presented in detail.

In summary, our data underlines the importance of the histological examination of surgical specimens following appendectomy. Even if unexpected findings of malignant appendiceal tumors seem to be rare, their number is relevant due to the high number of patients operated for acute appendicitis annually. Because patients with appendiceal neoplasms do not develop specific symptoms, they present a diagnostic challenge that every surgeon should be aware of.