Adult intussusception is a rare entity that is almost always associated with a demonstrable lead point. There has been a notable association between adult intussusception and inflammatory fibroid polyp (IFP) or Vanek’s tumour. These polyps are benign tumours arising from submucosa, comprising of mesenchymal cells like fibroblasts and numerous variably prominent small blood vessels along with chronic inflammatory cells commonly eosinophils. Inflammatory fibroid polyps are uncommon; moreover, these polyps causing secondary intussusception in an adult is still rarer. Clinical manifestations of IFP vary based on size and location within the GI tract. Here, we report a case of inflammatory fibroid polyp of ileum, presented as acute on chronic pain abdomen in a 38-year-old woman. The rareness of the disease made it a clinical challenge to subject the patient to laparotomy. However this patient underwent resection of the intussuscepted small bowel with primary anastomosis. The rareness of non-malignant condition being the cause for adult ileo-ileal intussusception and the clinical challenge associated with it makes it a case worth reporting.

A 38 year old female presented to our hospital with complaints of pain in the epigastric region on and off for the last 2 months and also complains of pain in the left pelvic region occasionally. Patient was apparently well 2 months ago when she experienced the first episode of pain in the epigastric region, which is mild aching in character and non radiating. There is no history of vomiting & fever. H/O of intermittent constipation present. No history of bleeding per rectum and no alteration in stool consistency. she is a known case of hypothyroidism on irregular medication, stopped 2 months back, not diabetic, not hypertensive, no past history of bronchial asthma & Pulmonary TB LMP -Irregular cycles, & Menorrhagia +nt On Per abdominal examination

No nidus or lead point for the intussusception could be clearly identified on imaging.

3. No evidence of ascites or retroperitoneal adenopathy 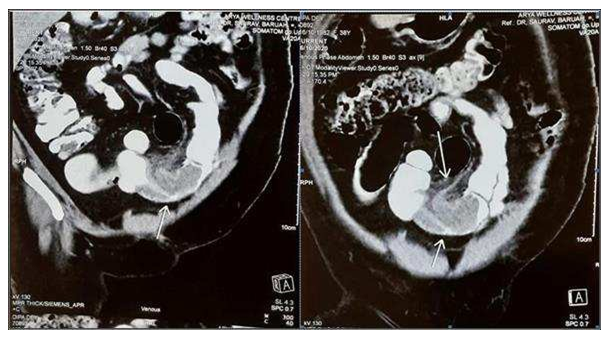 Patient was given conservative management by keeping nil per oral, IV fluids as per requirement, basic antibiotics and analgesics. As the pain did not get relieved and CT abdomen revealed a suspected malignant lesion associated with intussusception & a ovarian cyst, patient was taken up for exploratory laparotomy. 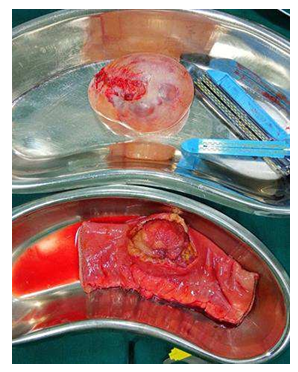 Figure 3: Ovarian Cyst after Ovariotomy & Intraluminal Tumour in the resected segment of ileum

In 1949, Vanek first described the lesion as an eosinophilic submucosal granuloma. Whereas the term IFP was first proposed by Helwig and Ranier in 1953 for gastric polyps; since then, it has gained acceptance for similar lesions throughout the GIT [4,8]. For a couple of decades, IFPs have been considered as reactive changes of the lining mucosa of the GIT. The discovery of PDGFRA mutation signatures in IFPs has helped to unveil their neoplastic nature [9]. IFPs are always asymptomatic, and they remain silent for a long time without being diagnosed. Incidentally, they may be diagnosed during laparoscopic or endoscopic examination due to other underlying gastrointestinal (GI) medical conditions. If the lesion is symptomatic, it typically presents during the 6th or 7th decade, but there have been reports of young adults with chronic manifestations such as weight loss and intermittent constipation [21]. As they become clinically detectable, the signs and symptoms usually depend on two factors: location and size of the tumour [10]. Studies have shown that IFPs that involve stomach present with abdominal pain, whereas those with small bowel involvement often present with intussusception and obstruction [11]. Moreover, vomiting, diarrhea, tenesmus, and alterations in bowel habits are also seen although their frequencies are low. Larger polyps tend to erode and ulcerate superficially and lead to bloody stool. Patients with IFPs in the small bowel are most likely to present with chronic episodes of colicky abdominal pain, lower GI bleeding, anemia, and, more rarely, intestinal obstruction due to episodes of intestinal intussusception and rarely with necrosis and perforation [12]. Although malignant diseases represent the major causes of intussusceptions in adults, there are few reports of intestinal obstruction and perforation caused by IFPs. Preoperative diagnosis of intussusceptions is rare but can occur in finding a palpable mass on the abdomen with the use of imaging techniques. The etiopathogenesis of IFPs is unknown. Hypotheses have been postulated in the attempt to explain the cause of IFPs such as foreign body, parasites, and chronic H. pylori infection which have been suggested but remain unsupported [13]. Localized variant of eosinophilic gastroenteritis is another proposed aetiology due to frequent observation of a marked eosinophilic infiltration in most cases [9]. It was not possible to ascertain the predisposing factors that were associated with the development of this ileo- ileal IFP in our case. Our case indicates that this condition has to be considered not only in elderly patients with features of chronic abdominal pain, vomiting, and frequent distension of the abdomen, but also in adult patients with acute on chronic pain abdomen. Abdominal CT is currently considered the most sensitive imaging diagnostic technique to show the polyp or to confirm intussusception [14]. Most IFPs can be resected endoscopically. Only rarely surgery is needed. IFPs arising below the Treitz ligament can present with an acute abdomen usually due to intussusception. Exploratory laparoscopy or laparotomy is frequently recommended as the best treatment for intussusceptions caused by IFP. The operation should be performed as early as possible in order to prevent the intussusceptions from leading to ischemia, necrosis, and subsequent perforation of the invaginated bowel segment [15]. Most IFPs are positive for CD34, whereas about 10%-20% of cases show focal reactivity for SMA and desmin. C-KIT (CD117), DOG1, and S-100 are consistently negative [16]. Although IFPs are biologically regarded as benign and noninvasive lesions [17], few cases have been observed to invade the muscularis propria layer [18]. With regard to gastric IFPs, only three invasive cases have been reported in the literature described in 2015 [19,20].

Although Vanek's tumor is a rare entity, it should be considered as a differential diagnosis in every case of intussusception in an adult. This case report demonstrates the possibility of benign inflammatory lesion causing secondary intussusception. IFP of small intestine is not fatal and patients remain asymptomatic in their daily life except for intussusception or bowel obstruction. Also, deligent clinical evaluation still determines the decision of subjecting the patient to surgery.

Institutional and international research regulations were observed during the time of interacting with the patient and the preparation of the manuscript.

A written informed consent was obtained from the patient for the case details to be published, and it has been kept by the corresponding author.

The authors declare that there are no conflicts of interest regarding the publication of this article.