De Garengeot hernia is defined as femoral hernia containing appendix. It’s an extremely rare occurrence occurring in 0.5% to 3% of femoral hernia cases, with a female: male ratio is 6: 1. We report the case of a 71 years old female patient, who presented an incarcerated right femoral hernia. We performed an explorative laparoscopy with the visualisation of the appendix. The appendix was normal. An intraabdominal reduction of the appendix and the treatment of the hernia by TAPP technique was performed. De Garengeot hernia can be can be a unusal discovery during surgery. The differential diagnostic is with Amyand hernia, which is an incarceration of the appendix in an inguinal hernia. Due to the low occurence of this pathology the explorative laparoscopy may be a valid technique for diagnostic and treatment. In case of acute appendicitis, the use of the mesh is not formally recommended. The laparoscopic treatment of De Garengeot’s hernia is feasible even in emergency setting. If the appendix is inflammatory the appendectomy is mandatory.

A 71-year-old female patient presented in consultation for right lower abdominal pain, who revealed a small femoral mass occurred some days before. The medical history revealed 2 caesarean section surgeries. The physical examination revealed an irreducible and painful groin lump below the right inguinal ligament in the femoral triangle. Laboratory findings were into the range of normality. An abdominal echography was performed who found an intestinal structure incarcerated in the femoral hernia. We performed an explorative laparoscopy under general anaesthesia.

A 10 mm trocar was placed in peri-umbilical position and two others 5 mm trocars where positioned into the right and left flanks. The exploration found a femoral hernia with an incarcerated vermiform appendix (Figure 1). The content of the hernia was reduced into the abdomen. No signs of inflammation were identified on the appendix and the appendectomy was not performed. The femoral hernia was repaired with a TAPP technique. The mesh was not fixed to the pubic branch (Figure 2). The postoperative course was uneventful, and the patient was discharged at the first postoperative day. The follow up was uneventful. 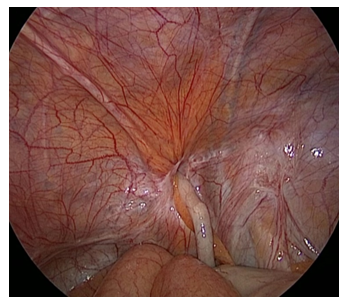 Figure 1: Presence of the appedix vermiformis in the femoral hernia. 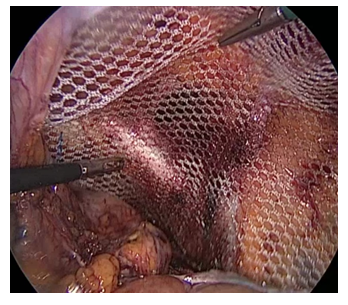 Figure 2: Placement of a non-resorbable mesh in the preperitoneal position.

De Garengeot hernia was first reported in 1731 by Rene Jacques Croissant de Garengeot, a French surgeon, and in 1785, Hevin first described an appendectomy for acute appendicitis on a patient with De Garengeot hernia [4]. De Garengeot hernia is diagnosed most of the times during surgery for other pathologies and should be distinguished from Amyand hernia, which is defined as inguinal hernia containing the appendix and is a more frequent surgical finding due to higher prevalence of inguinal hernias. Concerning the radiological diagnosis, the ultrasound is the first choice. Linder et al. in a meta-analyse found that the ultrasound (US) was realised in 18 patients, but the diagnosis was only established in one patient [5, 6]. Contrarily, US appears efficient in excluding a vascular component of the palpable finding, such as arterial aneurysm or thrombophlebitis [7, 8]. The inconvenient of US is that is radiologist dependent, and the diagnostic can be easily skipped. The use of abdominal CT scan, is not systematically practiced in published cases, but can provide an early diagnosis in the preoperative phase of this type of hernia. Therefore this radiological study can be decisive for the surgeon to choose the approach and to avoid a delayed time for the surgery [9].

There are few published cases of a laparoscopic approach of this type of hernia. Due to the rarity of this disease there is not standard procedure. Laparoscopy can be a valid technique for determining the condition of hernia and to decide the best attitude for the treatment [13]. In our case, the appendix did not present signs of inflammation, and it was easily reduce in the abdomen. The hernia can be treated by laparoscopy with mesh placement (transabdominal pre-peritoneal (TAPP) or totally extra-peritoneal (TEP)) or by open repair [14, 15]. The use of the mesh should be reserved for cases in which there is no appendix inflammation and risk of infection. Some studies prove the feasibility of implantation of mesh even in infected wounds, but we do not consider a safe attitude for the patient due to the potential postoperative risk of mesh infection. A solution can be eventually the placement of a resorbable mesh but this attitude it is not described in the literature. [10-12] Beysens et al. considering the risk of mesh contamination, propose that with TEP repair, the mesh is placed outside of a possible contaminated area, thus minimising potential complications, as would be the case with open preperitoneal routes [16]. We consider that for this pathology the TEP is not a good option, because this approach do not allows an intraabdominal exploration and evaluation of the abdominal organs.

De Garengeot’s hernia can be approached in emergency and elective setting by laparoscopic exploration. Explorative laparoscopy, can provide a diagnostic, if doubt, and the treatment of this pathology and should be the technique of choice. The appendectomy is necessary only in case acute appendicitis, but the mesh placement in this conditions it is at risk of infection.