Introduction: Non-palpable breast lesions are very difficult to excise accurately without wire localization. We present a case where the wire had migrated into the axilla and noticed during surgery.

Case presentation: A 55-year-old lady was admitted for wire guided surgical excision of a clinically non-palpable right breast lesion. Before starting the surgery it was noticed that the wire had migrated and confirmed by X-ray to be in the axilla. Multiple attempts to retrieve it failed and procedure was aborted. CT scan was done next day to localize the wire and patient was brought back for surgery the next day. We were successful in retrieval of wire and tumor which was confirmed by histopathology later.

Conclusion: Surgeons and radiologists should be well aware of this complication and additional measures should be taken to secure the wire.

Wire localization of non-palpable breast lesions has been the standard of care for appropriately selected patients for the past few decades [1]. Migration of the wire however is a cause for concern in terms of accurate tumor excision and the potential for rare but life-threatening complications [2]. We present a case where the wire migrated into the axilla necessitating image guided wire localization of the wire and surgical excision.

A 55-year-old lady was diagnosed with right breast invasive mucinous carcinoma after having a recall biopsy following a screening mammogram. She was scheduled for right breast wire guided wide local excision after a multi-disciplinary team discussion. She underwent wire localization along with skin marking a day prior to surgery. The wire in the right breast was introduced craniocaudally into the lesion which was located at 4 o'clock position. The outer portion of the wire was cut short to 8 cm for ease of dressing application and was fixed to the skin with adhesive skin closure strips and then covered with a dressing. Post procedure mammogram confirmed the right position of the wire. She was taken to the theatre the following day. After induction of anesthesia and intubation the patient was exposed and the dressing over the wire was removed but the wire could not be seen. A chest x-ray was performed on table which revealed the wire to be displaced laterally in the breast. Wide Local Excision was performed guided by skin marking.

Attempts were made to retrieve the wire but failed despite use of fluoroscopy and radiologist assistance in theatre. Therefore it was decided to leave the wire in situ and return to the operating room after a formal computed tomography (CT) guided localization of the wire. The patient remained stable throughout this period and wound was closed with a drain within the cavity. A CT scan of the thorax was done post operatively and the wire was identified to be deep within the right axilla near the scapula.

CT guided wire localization was performed and the patient was taken to the operating room the next day. Intra operatively the guidewire tip was reached however the wire could not be identified. Further dissection of tissues towards scapula was done and the wire was identified and taken out in total. The hook of wire was found to be attached to the muscles at tip of scapula. Hemostasis was achieved and wound closed. The patient had a smooth post-operative course and was discharged the following day. Her histopathology confirmed complete excision of cancer with negative margins. 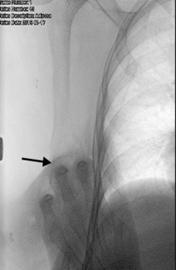 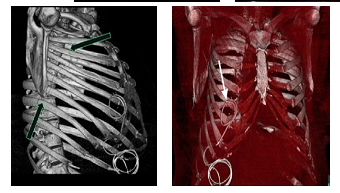 Figure 2: Reconstructed images of the CT thorax showing the wire to be deep in the axilla near the tip of the scapula. (arrows pointing at wire).

Over the years as screening for breast cancer has increased, the detection of non-palpable lesions has also risen. After image guided biopsy a proportion of these lesions may require surgical excision for diagnostic or therapeutic reasons. Breast conserving surgery has been the mainstay of treatment and has been found to be safe and effective for many early breast cancers over the past few decades [1, 3]. Adequate excision of these non-palpable tumors require accurate localization techniques. One of the oldest techniques initially described in 1965 by Dodd, et al. for the localization of such tumors and which is considered the standard of care in most centers is wire needle localization (WL). There are various other techniques now available for localization for example, Radio-occult lesion localization, Radioactive seed localization, Infrared radar (eg., SaviScout), Magnetic seed device (eg, MAGSEED), Radiofrequency identification tag, Hematoma/ultrasound-guided localization [1].

Wire localization involves placement of a flexible wire into a non-palpable lesion under mammographic, sonographic or CT guidance together with a reference point marked on the skin to provide an accurate estimate of the location and depth of the tumor. Clear margins with this technique have been reported to be 70.8-87.4% [4]. The procedure is performed either on the day prior to or the morning of the procedure. A variety of needles are available such as standard needle, spinal needle, hook-wires or curved-end retractable wire [5]. At our center we use a 20G, 25 cm, spring-hook wire on a standard needle.

Although a very cost-effective method, adequate compliance by the patient is pertinent to prevent dislodgement of the wire which is one of the major disadvantages of this technique. Wire migration is a rare complication and usually displaces to sites within the breast. However there have been reports of migration of the wire to sites outside of the breast such as the supraclavicular fossa [2], pleural cavity [6], pericardium, resulting in cardiac tamponade [7], retraction of wire into the breast [8], in the infraclavicular fossa, subcutaneous tissue of the contralateral axilla, and subcutaneous tissue of the buttock [9].

Over the years many new non-wire techniques for localization have been proposed and are currently in use as mentioned above, however no single technique has been shown to be superior to another. More recently iodine-125 seed-guided localization (I-125 GL) was introduced as an alternative localization technique and has been shown to significantly reduce the risk of positive margins, provide better localization of the tumor as two or more seeds can be used to provide a 3-dimensional view of the tumor and also avoids the complications associated with having a hook or a wire inside the tissue [10].

Wire displacement is a cause for concern in terms of adequate and accurate excision of the tumor as well as the potential for possible life-threatening complications. Surgeons and radiologists should be well aware about such complications and ensure that the wire (if used) is adequately secured to the skin by means of having an adequate length of wire outside the breast and securing the wire to the skin with clamps and clear adhesive covers which allow visualization of the wire. Non-wire techniques may also help avoid such complications.